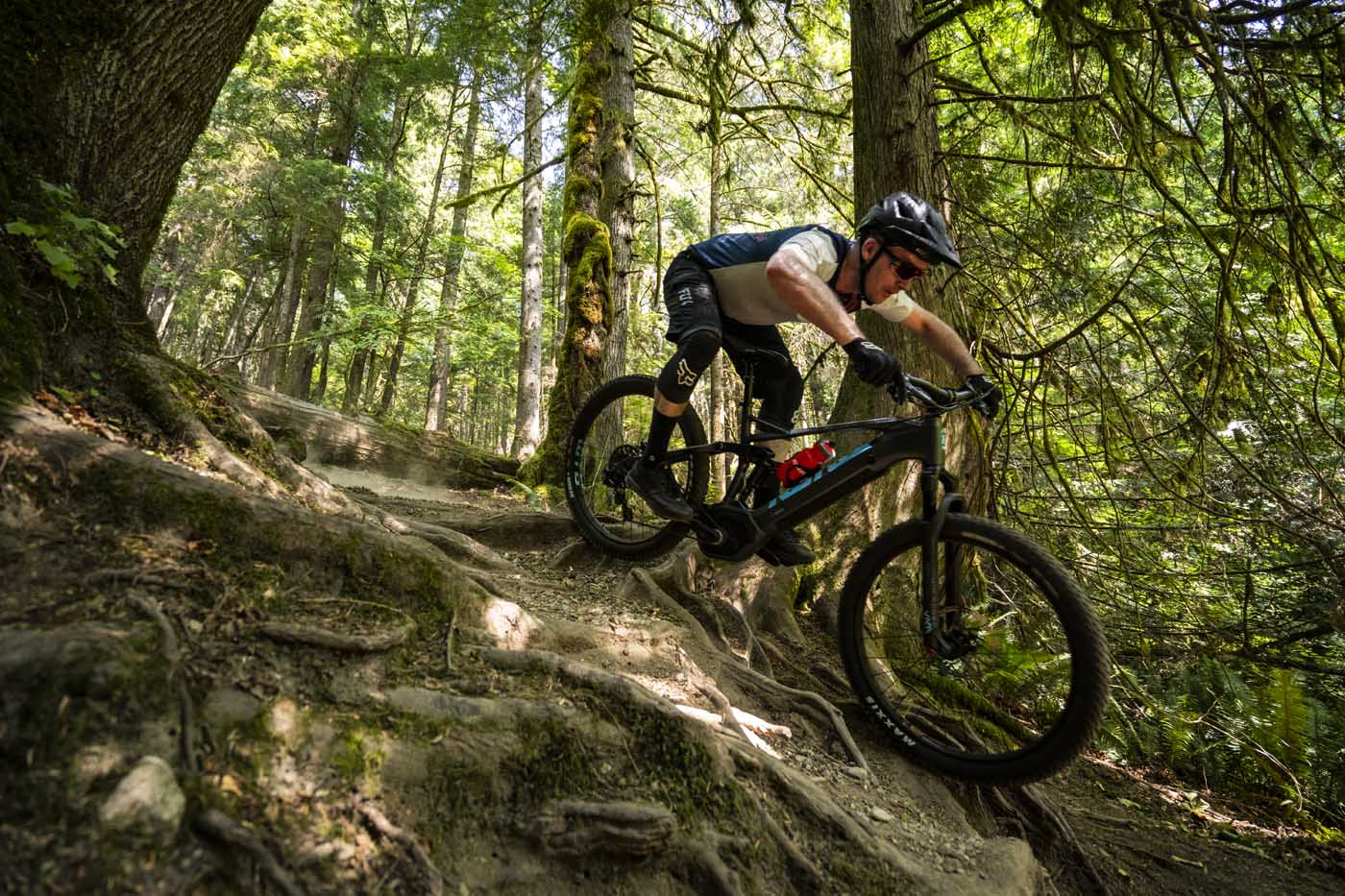 Meet Kona’s highly anticipated entry into the full-suspension e-trail bike domain. Clearly, they haven’t wasted any time getting up to speed in the new market, you need only glance at the Remote Ctrl to discover that Kona have put together an impressive package with this new bike. The frame, it’s geometry numbers and the bike’s motor and component spec appear to tick all the right boxes.

Kona have designed the Remote Ctrl as a trail attacking machine with a 150mm fork up front, 132mm of travel in the back and burly 27.5” x 2.8” wheel and tyre package. I recently got to spend a full day getting to know this bike on some awesome trails over in Squamish, Canada, and I have to say I really didn’t want the ride to end. This bike is sure to put a big grin on your dial, it’s just bucket loads of fun and it ducks and weaves through the trails with gusto. 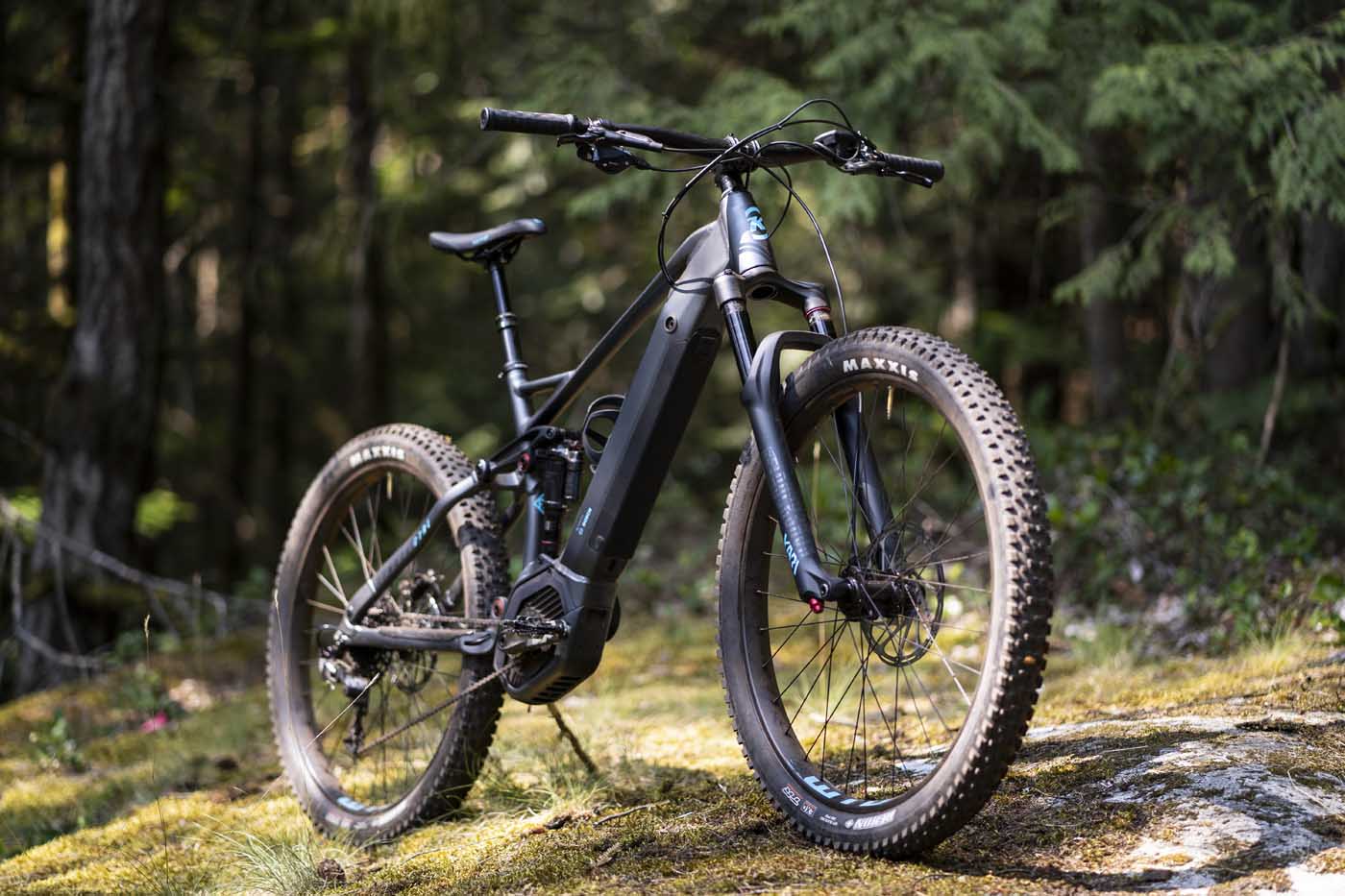 At the heart of the bike is the impressive new Bosch Performance Line CX motor. This is Bosch’s premium motor offering and it certainly doesn’t spare anything in terms of performance or ride quality. We’re talking up to 75 Nm of torque and up to 300% of support delivered through the motor in silky smooth fashion. The rider has the option of selecting between 4 power modes with Bosch Performance Line CX system; Eco, Tour, eMTB and the mega powerful ‘Turbo’ setting! The setting that I was personally super impressed with whilst I was riding the bike was the eMTB mode. Unlike with other e-bike motors where you need to manually select and change the power mode during your ride to match the trail conditions, when using Bosch’s unique eMTB mode the system cleverly changes between all of its power modes for you, constantly, throughout each ride automatically adapting to the trail, gradient, the amount of power that you’re putting through the cranks and even your riding style, so there is no need to manually change support modes you just leave it in eMTB mode and you’ll always be getting the optimum amount of power support – rad! The Bosch system is known for its smooth power delivery, reliable performance, and excellent dealer support network right across Australia (and the world).

To ensure your rides are going to be as long as possible between charges, Kona has spec’d the Remote Ctrl with Bosch’s impressive 500w Powertube battery unit. The battery has been neatly incorporated into the downtube and its Abus Plus key lock system is a nifty security feature to prevent the battery being stolen. (Apparently there are people in this world that would actually want to steal the battery out of a bicycle if it was left un-attended? Weird.)

“I admit that I was a little curious to see if the bike’s 132mm of rear travel was going to be enough to handle the style of riding that rocks my boat… As soon as the single track started, that question mark dissolved as the bike ate up all of the rocky and roots and rollovers that the trail had in store.”

The Remote Ctrl’s 6061 Alloy frame shares a similar silhouette of Kona’s popular Process ‘naturally aspirated’ trail bike models. It features a ‘Beamer’ Independent rear Suspension design, built to be off-the-top progressive, which is effective at helping the bike to stay higher in the travel and recover from hits more quickly. With something to fit pretty much all riders the Remote Ctrl is available in 4 sizes from Small right through to XL.

The Remote Ctrl is only offered in 1 spec level but Kona have been clever with the choice of parts. To be honest there isn’t really anything I’d change out of the box. In keeping with the bike’s all-mountain intended use, Kona have spec’d plenty of parts designed to gobble up burly trails, whilst being mindful of wanting the Remote Ctrl as affordable as possible (less than 8g’s here in Oz). And at the same time, they’ve managed to keep the bike’s overall weight from blowing out (like a lot of e-trail bikes tend to do), due to heavy / cheaper spec. A well-balanced tight rope walking act indeed. Okay, so what are you getting in the package here? There’s a set of RockShox Yari forks up front featuring the new DebonAir and Motion Control units inside – so they actually feel pretty nice and even though they’re not a premium level fork their performance won’t leave you wanting more. Bolted to the rear you’ll find a RockShox Monarch Plus R Solo Air shock, again nothing too fancy, but it proved itself to do the job well. I certainly wouldn’t be racing to upgrade it any time soon. It comes with a set of tough and meaty wheels comprising of a pair of (Boost) Formula hubs laced to wide WTB rims finished with a pair of lovely 2.8” wide Maxxis Reckon tyres. Drivetrain wise you’re getting SRAM’s e-bike specific ‘EX1’ eleven speed system. To pull the thing up you’re getting a set of powerful SRAM Guide RE brakes. There’s also a Trans-X Dropper post on there (a brand I’d never actually heard of before?) which seemed to perform well enough. The cockpit is taken care of with a Kona’s own bar and stem combo, and yeah, all in all there was nothing spec’d on the bike that I felt let its overall trail performance down at all. Price tag wise it will retail in Oz at $7999, which in e-bike terms, means the Remote Ctrl represents pretty damn good value for money.

When I first got on the Remote Ctrl and started making my way to the trail head I admit that I was a little curious to see if the bike’s 132mm of rear travel was going to be enough to handle the style of riding that rocks my boat… As soon as the single track started, that question mark dissolved as the bike ate up all of the rocky and roots and rollovers that the trail had in store. In fact, it wasn’t until the following day when I was chatting with someone about the bike that I even remembered that the bike only packs 5” of rear travel. I’m sure Kona’s team could have given this bike as much rear travel as they liked however I reckon I would have to agree with them that 132mm is pretty much spot on all the bike needs.

“Price tag wise it will retail in Oz at $7999, which in e-bike terms, means the Remote Ctrl represents pretty damn good value for money.”

The Remote Ctrl’s well thought out frame geometry and reach numbers combined give the bike a comfortable and confident feel as you’re darting across the trails. With the bulk of the mass coming from the motor and battery positioned quite low down in the frame the bike also corners surprisingly. You’ll find that is in fact relatively easy to prop the bike back up and out of corners to flick it over into the next change of direction. I would imagine even riders that are much smaller and lighter would have no trouble throwing the Remote Ctrl around the trials with confidence. 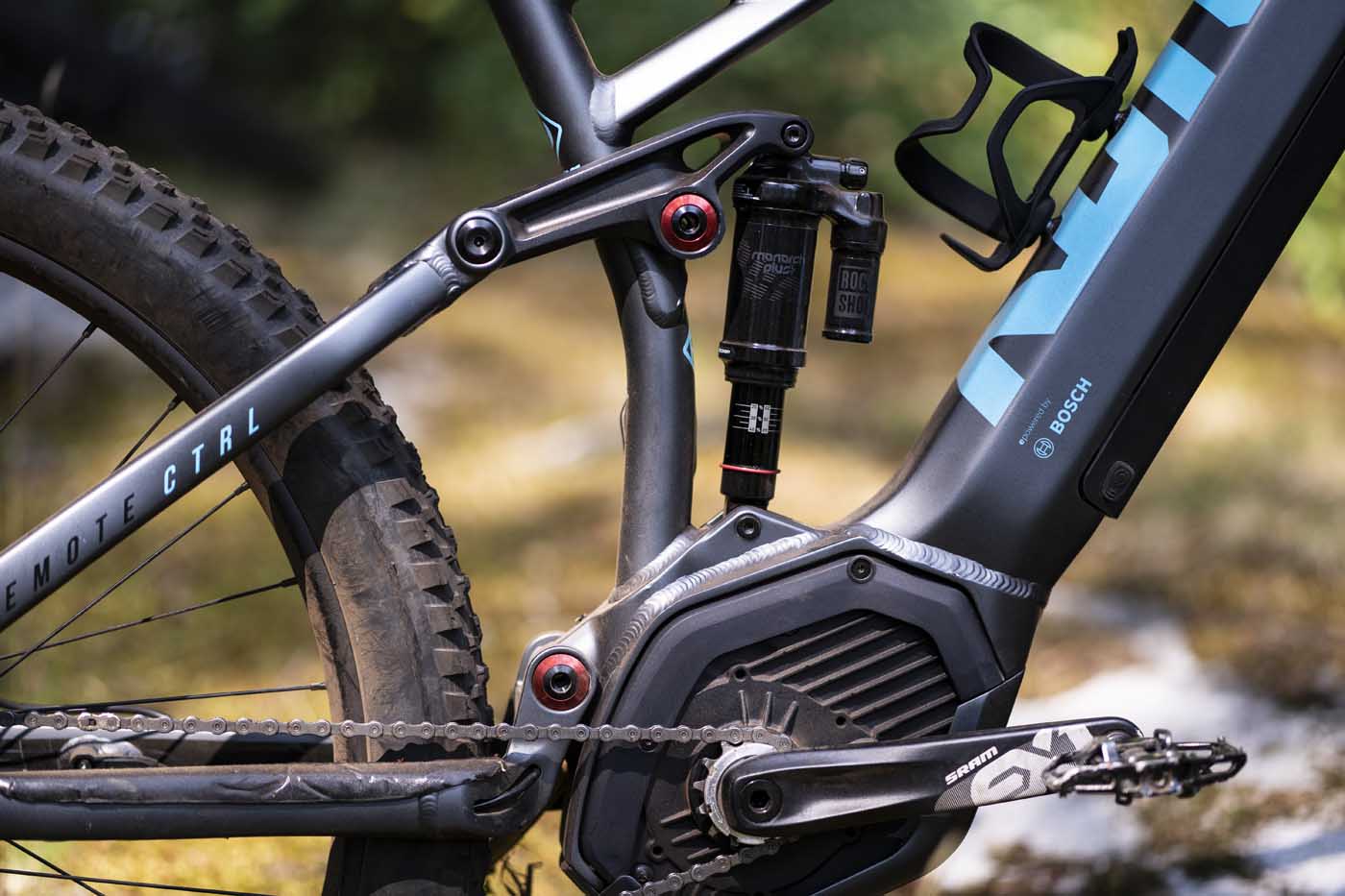 I also came away from the day as a big fan of the performance that the Bosch Performance Line CX motor delivered. I’ve briefly ridden a couple of Bosch system equipped e-bikes in the past but this was the first time I’d spent a proper amount of trail time on their motor product. The way that the engine’s power is delivered feels really smooth but there’s also a heap of torque in there that feels outrageously fun to raze along the trail faster and more efficiently than you probably thought you ever could.

I have to say, for their first real soiree into the trail specific e-bike world Kona have created a bloody good all-round package.

Kona Bikes are proudly distributed throughout Australia by Groupe Sportif. To learn more about the new Remote Cntl, including price, specs, and to find your closest dealer, visit: http://www.konaworld.com/remote_ctrl.cfm