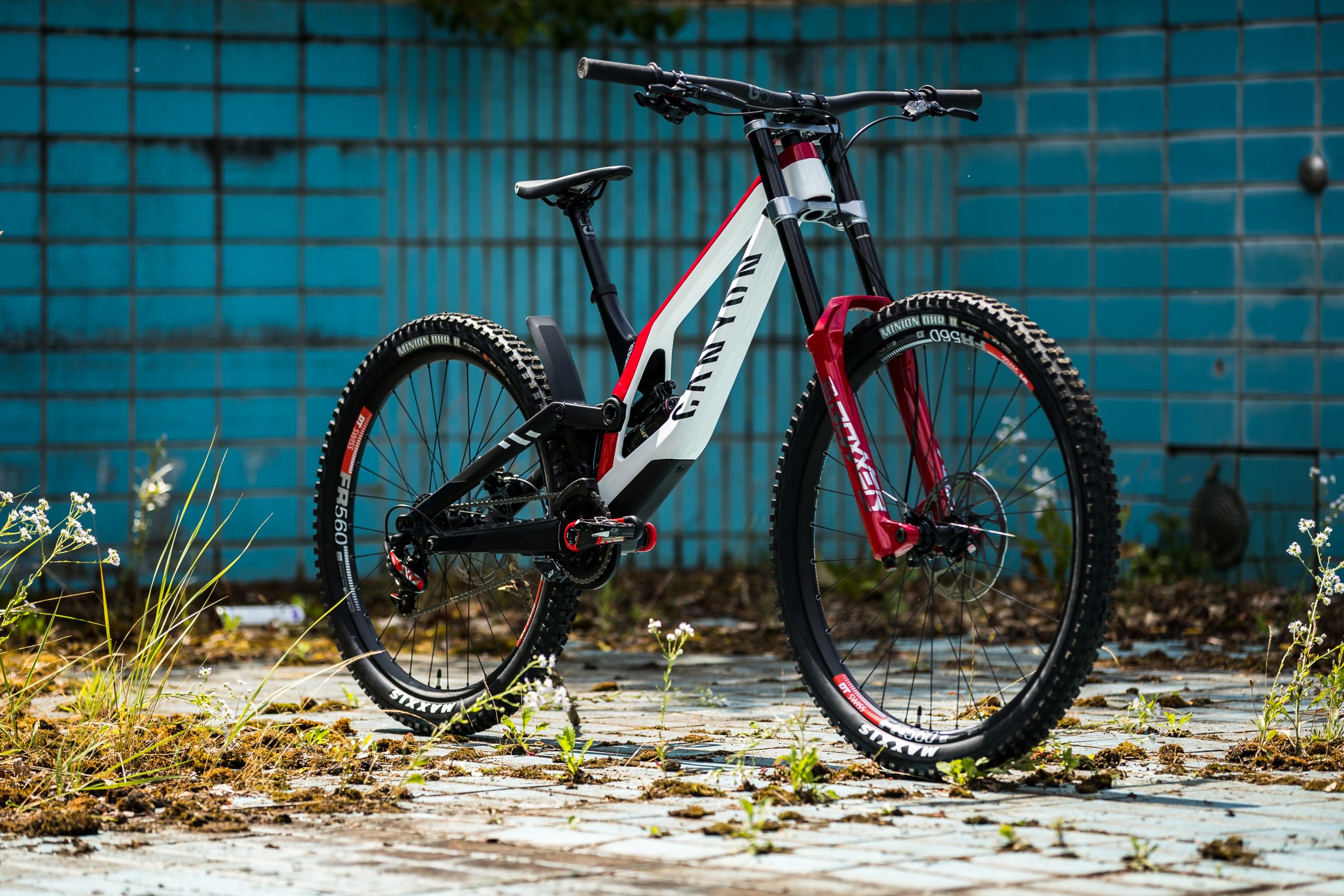 One of the most successful bikes amongst racers, and at the same time one of the most popular amongst regular punters (like you and I!), the original carbon fibre Canyon Sender has certainly made a name for itself. And now, as the title of this article eludes too, the German mega brand is set to release a new version of their DH power horse making it lighter and faster than ever before.

Perhaps the only thing more striking than the appearance of the new Sender CFR (you’ve got to admit this thing looks absolutely breathtaking) might be the long list of technical features that the bike comes with. So let’s jump right in and run through some of the key points.

As has become quite the trend with the latest generation DH bikes, I’m sure you’re wondering if the new bike is centred around a set of 29” wheels or if it is running a ‘mullet’ set-up (meaning a 29” front wheel and a 27.5” in the rear). Well, the answer to the Sender’s stock wheel size question is actually ‘both!’ The Small and Medium models come stock with a “mullet” set-up whilst the Large and X-Large versions arrive with the full 29” treatment. The concept makes a lot of sense really; for taller riders the 29” wheels improve roll over through rocks and roots. As you’d know if you’ve ridden a 29’er they maintain momentum like a champ. Whilst on the other hand, the mixed wheelsize provides shorter riders with many of the same roll-over benefits, while also providing them (thanks to the smaller rear wheel) with crucial crotch-to-tyre clearance on steeper courses.

Given that Canyon’s factory racing team has one of the deepest rosters in all of MTB it probably isn’t surprising to learn that the new Sender CFR production bike has a ton of R&D input from the brand’s ultra-fast talent. Any guesses what the ‘CFR’ part of the name stands for? Yep, ‘Canyon Factory Racing’.  Late last year [R]evolution spent a few days down at Maydena Bike Park with Troy Brosnan where he was trialling plenty of different bike set-ups. From prototype frame pieces to all different wheel combos, Troy was hungry to find the fastest set-up which he was then planning to use as his set-up for the upcoming 2020 World Cup series (that was before life as we knew it melted overnight…) Needless to say, Troy and his teammates were incredibly instrumental in developing the new Sender and when racing does finally get back underway Troy and the rest for Canyon Factory Team will be racing stock frames, exactly the same as you can jump online and purchase for yourself literally today. 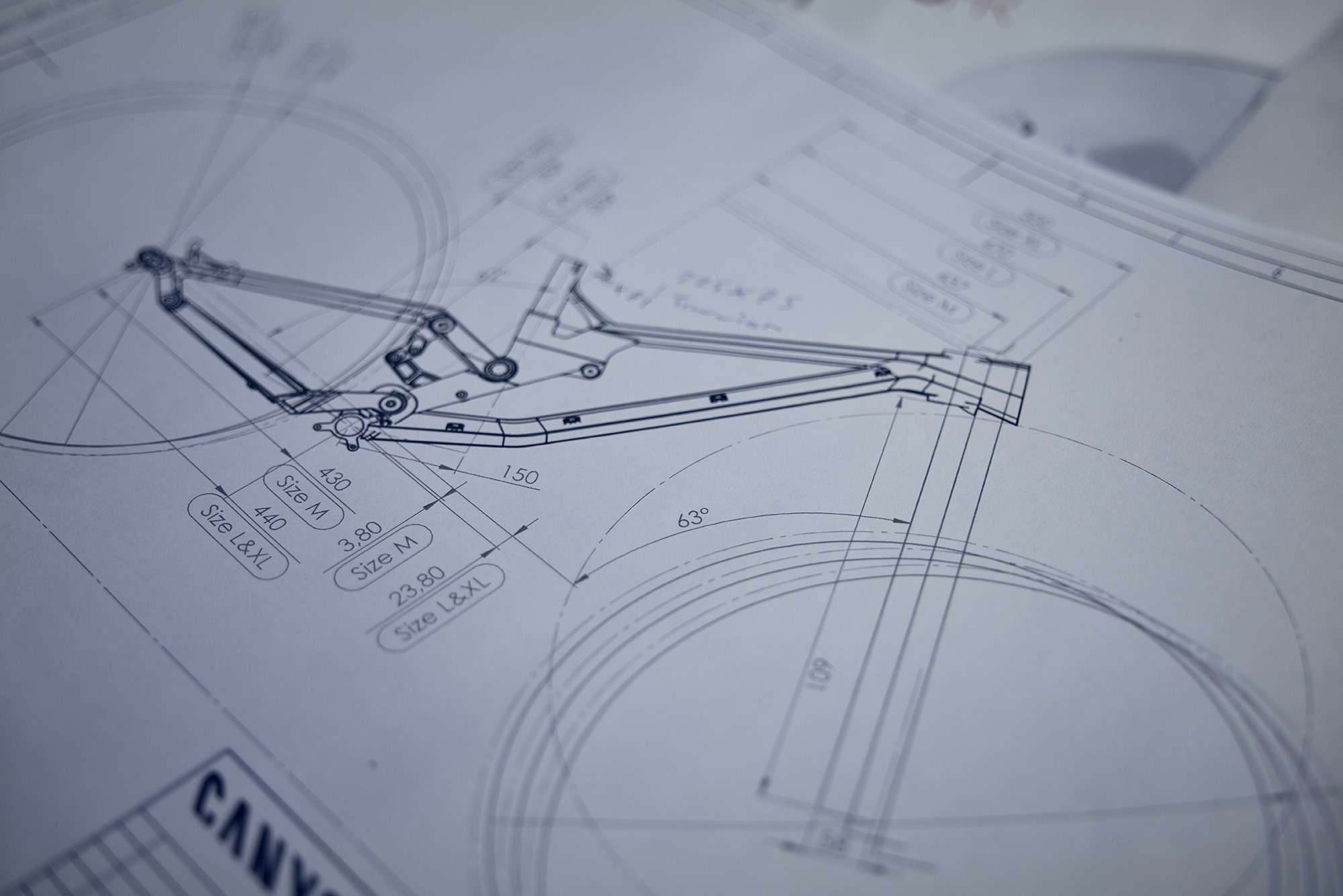 When you consider that the previous generation carbon Sender was already one of the lightest DH race bikes in its class, prepare to have your mind blown when you hear just how much additional weight Canyon has managed to strip away in creating the new frame… over 600 grams!!! One area in particular that they were able to drop a heap of weight was by lowering the shock down through the chassis so that it’s positioned much closer to the BB than the original bike. Of course, repositioning the mass of the shock lower in the bike, the overall centre of gravity is much better which delivers more trail traction which equals a faster bike. And not only that but Canyon are claiming the new Sender is noticeably more durable than the last bike. Interestingly, Canyon have no plans to release an alloy version of the new Sender, nor will they be releasing a more budget friendly mid-level carbon layup ‘CF’ version as they do with several other models in their range, instead, they’re insisting that the Sender CFR bike has been designed specifically for the highest level of racing and that means it should only have the most premium level frame possible.

Okay so to be totally honest we thought this next part was bullsh*t at first when we read through the press release, however it turns out it is very true. To study and better understand the phenomenon commonly referred to as ‘pedal kickback’ due to the suspension kinematics of a particular frame design Canyon actually partnered with the Pforzheim University of Applied Sciences in a 2 year in-depth study, involving countless tests ‘in the lab’ and also ‘out in real world’ (on race tracks) in order to fine tuning the new Sender’s kinematics. Canyon believe what they’ve come up with as a result of that partnership and testing is a frame design which performs unlike any DH platform has managed to do before. They’re calling it ‘Triple Phase Suspension’ and it works like this. 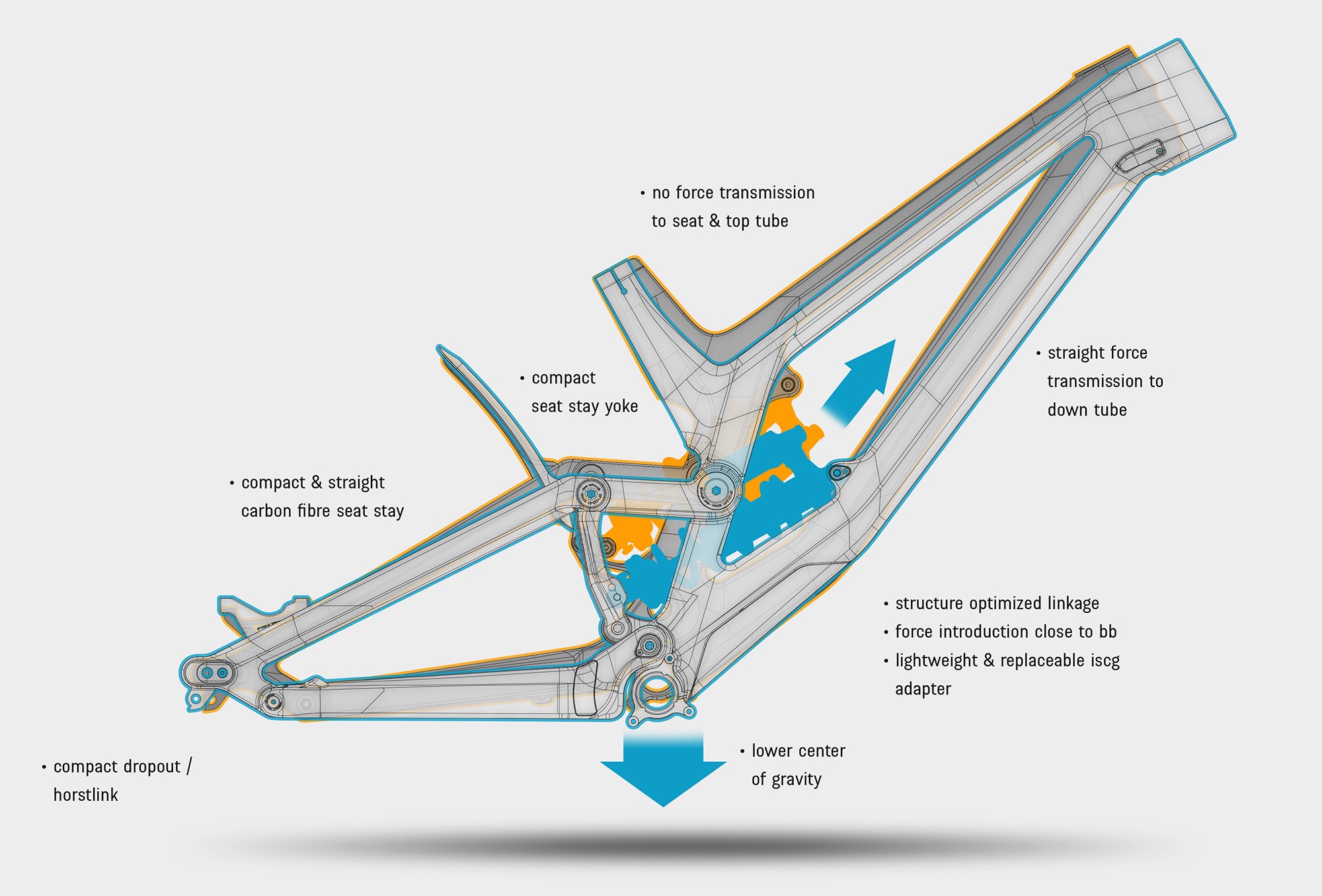 The precise positioning of the rear shock and suspension pivot points provides outstanding sensitivity and responsiveness at the start of the stroke.

Through the mid-stroke the suspension provides a stable platform, letting the rider put maximum power through the pedals and exit corners with more speed.

The end of the stroke ramps up progressively, giving the rider maximum bottom-out control on the fastest, most brutal courses. 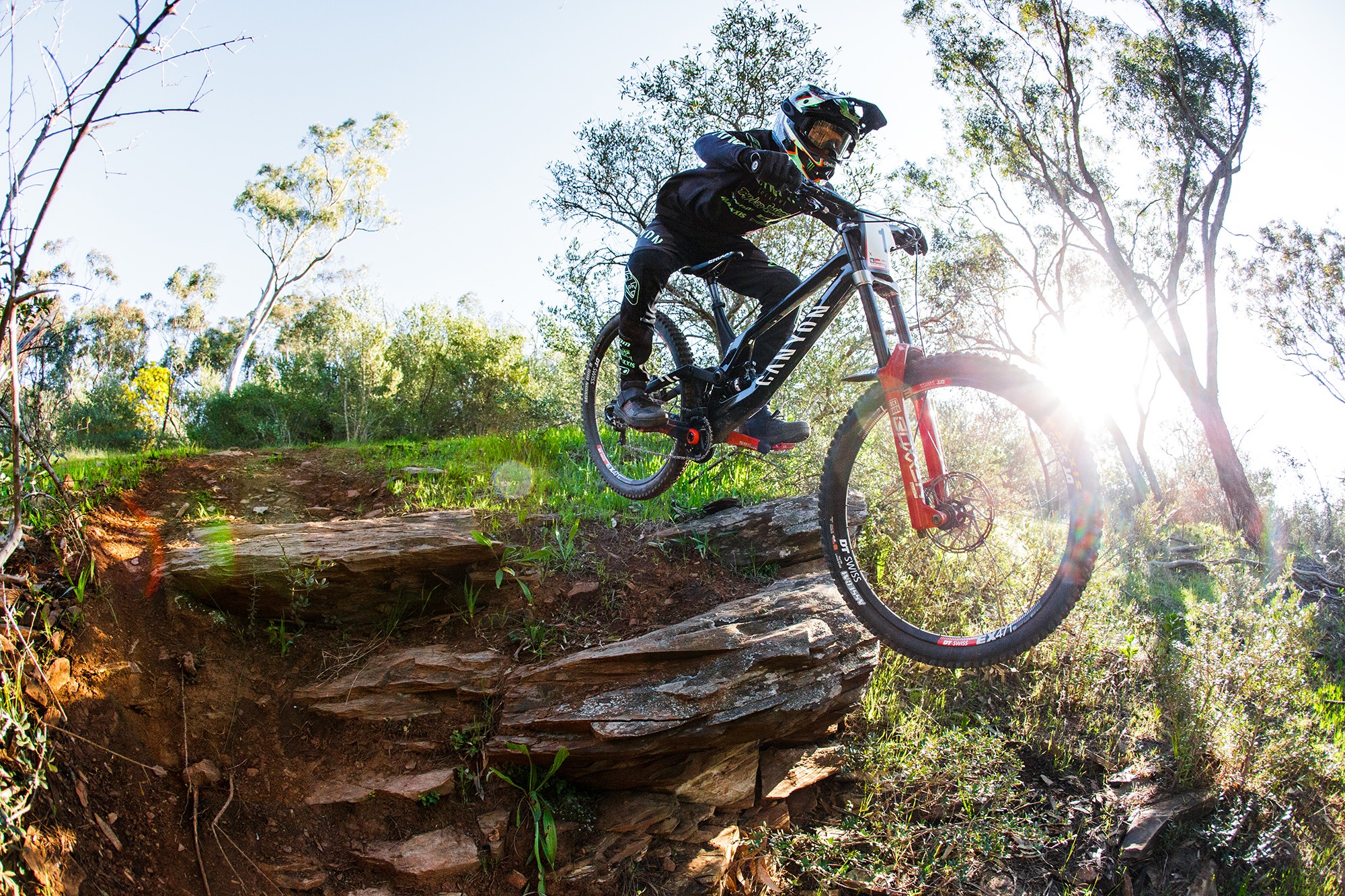 The bike also features an adjustable wheelbase with either a ‘long’ or ‘short’ setting which sees the chainstays grow or shrink 10 millimetres. What this means is that riders who typically find themselves “in between” frame sizes won’t have to compromise on fit when it comes to picking the Sender frame size that is right for them. Basically riders can choose a bigger frame and make it shorter through geo adjust. Or they can go the other way and get a shorter frame and then make it a bit longer.

The Sender will be offered over here in Oz in 2 models; the ‘team’ spec which is decked out with sugar sweet candy from SRAM and also the ‘FDM’ spec which comes loaded with Fox / Shimano bling.  Canyon are not planning on offering the new Sender as a frame only option at this stage. Both complete models are available for immediate purchase via Canyon’s webstore right now.

For more information on the new Sender CFR head to www.canyon.com