A vision to revolutionise the future of our sport // AusCycling 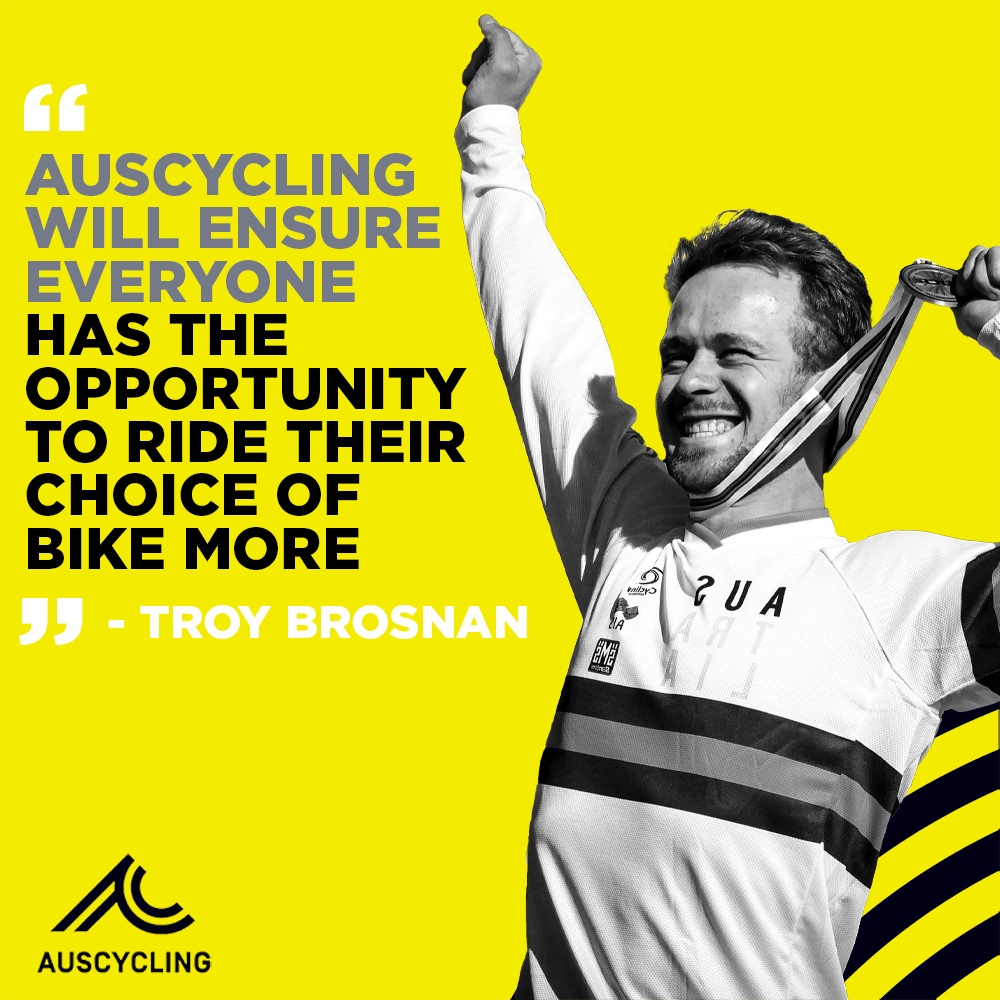 At its core the formation of AusCycling is aimed at improving the management of all disciplines of racing and social riding across Australia to provide a much better service and support for clubs and members.

To gain a greater understanding of the vision of AusCycling, the benefits that the formation will create, as well as some of the challenges that have gotten the three cycling bodies to arrive at this point, we sat down with Mountain Bike Australia’s (MTBA) CEO Shane Coppin for a chat.
But before we get stuck into the interview it is important for you to understand that this is a call to action. By casting a vote you can help make AusCycling a reality and play a vital role in changing the future of our sport. Any member of MTBA, BMX Aus or Cycling Australia is eligible to vote and it’s as quick and simple as filling out the proxy voting form (which can be found here). Come on, lets do this!

[R]: Shane, what is Aus Cycling all about, and how did the proposed formation come to be?
Shane: So AusCycling has a pretty long history. It’s not the first time an endeavour has been made to unify all the disciplines of cycling in Australia. But this version dates back to late 2016. And it’s progressed from when being BMX and mountain bike first approached Sport Australia to try and improve the relationship that was shared amongst all of cycling. We just didn’t feel it was functional, we needed to improve it. And during that time there’s been more and more discussions, and then eventually with the change in leadership and management of Cycling Australia, we were able to progress those discussions even further. And so over the last 18 or so months we spent a considerable amount of time working collectively together. We’ve had various consultations. I know in the cycling world, they’ve been discussing it with their state bodies for many months about how we can improve the whole structure and governance of cycling in Australia to maximize the potential for us all. Through that process, we’ve ended up where we are with our cycling, which is a proposal to integrate and merge all 19 various state and NSO organizations into one new cycling organisation, representing all disciplines in all states and regions, with offices in every state and territory to service and benefit members from grassroots right through to community, to advocating, to racing, to international, to pathways, to events, to supporting infrastructure and just giving cycling one collective voice
This has clearly taken a huge amount of vision and dedication to change from you guys. Let’s just backtrack for a second here, for people that might not know the current setup, who are the three governing bodies that AusCycling will amalgamate?
Well us (MTBA) who are in change of mountain biking, Cycling Australia who are in charge of road and track cycling, and finally BMX Australia.
So we’re talking about ultimately bringing all 19 bodies into a single vision for the future. Why is this even necessary? Why is the current situation or the current structure not functioning as well as it can be? What’s been going on?
I think it’s fairly well known that the three bodies have had a rather chequered past and strained history… One group thinks they get something the other group doesn’t. So for instance, Cycling Australia kind of isn’t a fan of the BMX crew, and the BMX crew think, you know, it’s a bit unfair what MTBA gets, and so on and so forth. It has been quoted to us that cycling in Australia is 130, 136 years old in some of the disciplines, and there’s potentially four million people that ride a bike. We’ve got collectively 55,000 members give or take between the three entities, and all the state bodies. And so if you sit there and go most of us are very small businesses, some of us don’t even have staff and if you lose a staff member, it puts your business in chaos. We’re restricted by what we can do. There’s probably $28 million give or take, circulating the pool amongst all the states and all the national bodies right now, but it’s all in little small pockets. We’re all trying to deliver the same outcomes. There’s 80 to 85 staff collectively amongst the 19 entities, but ultimately we’re competing against each other.
So essentially the problems MTBA is burdened with are the the same problems which are shared across all three, so if you can dissolve those problems and create one group, that’s a large structure that can form much more efficiently to benefit it’s members can only be a good thing, right?
I think everyone is working really, really hard. It’s just the capacity is so fragmented. A lot of the SSO’s and the national body have very strained relationships. There’s 19 separate boards directing those 19 entities in what they should do, and how those organizations should be focusing their attention, priorities and things like that.
And so how would forming AusCycling help to make that possible?
The discussion could be much, much more powerful. And I would put the challenge out, if we get this right with this potential change, why couldn’t cycling have quarter of a million members in 10 years time?
Totally. Absolutely. And so where does it all stand as of right now?
Right now the proposal is being voted on by members from every State. It’s currently got four votes from BMX for yes, and one no, and it’s currently got four votes from the road and track world. But there is a quite a bit of resistance, particularly in the road and track world against it.
If and hopefully when AusCycling gets the go ahead what are going to be the key benefits for the members?
There is going to be a really wide range of benefits immediately and then I think a lot more of them will also develop over time.

You can buy a membership to one entity, and one license to ride across all disciplines. So for 250 dollars, you can go and race road, track, mountain bike, BMX, CX.

I like that!
So there’s benefits in those sorts of things. But it’s also a benefit that when you want to get involved in the sport, or when you want to ask someone, you only ring one organization. So there’s a much better conduit for some member and club interaction. The new model will be collectively owned by 550 odd clubs that will own the new entity. There’ll be no state organizations. For mountain biking, a huge benefit to be gained by seeing representatives in offices in every state and territory that we don’t have today. Our capacity to have reach, our capacity to draw on the skills, and knowledge, and experiences of people who’ve worked in other cycling disciplines, and in other regions and jurisdictions, a capacity to potentially attract greater sponsorship and commercial outcomes to inject more money, to support more programs, to get people involved in cycling, or to promote or develop cycling. Greater impact when we talk to government, much harder to, you know, ignore someone ringing up lobbying for trails, or places to ride. And then you’ve got much better relationship directly with the UCI, much better relationship with other big event promoters, potentially EWS through the gravity world.
So all of this is about creating more opportunity for bike riders across Australia by forming a a much bigger vehicle to create opportunity for its members, and also for AusCycling to be able to go out there and generate a larger noise to benefit it’s members as well.
Exactly. Instead of just be a token in the discussions around road safety for bikes, have legitimate teeth in the game. So it’s about positioning all of cycling into a completely new framework that allows it to work collegiately together to grow across all areas, all disciplines, all regions for the benefit of the people who ride a bike. And that’s got to be the key focus from that grassroots stuff.
So tell us, from here what is it going to take to get Aus Cycling formed and launched into action?
It requires 75% majority voting from members of all the different 19 entities. So in the space of the majority of the clubs will have the vote in the federated structure for BMX and cycling, or road and track. And then in mountain bikes it requires 75% of those members who vote. So every one of our individual members, 17 and a half thousand, all are entitled to vote for Aus Cycling. And it just requires them to complete a proxy form, fill that out, and write what they would like to happen on that, and then return that back to our office to the secretary, by the 28th of this month. Our AGM is held on the 30th of November. People can turn up at the meeting if they want and vote, but you need to vote by the 28th if you want to vote before that. And we will have an outcome from MTBA on the 30th at the AGM. And to get Aus Cycling up really requires a majority of two of the three disciplines. So either mountain bike and BMX, or BMX and road and track. And certainly, if two are able to set it up, certainly the group or the discipline that’s outside that window will have some challenges for a while.
How long would it take AusCycling to form if it gets the votes?
It would look to go live around the mid point of next year. And during that time, there’s probably a 12 to 18 months full transition processes as we bring all the entities together, the workforces, and start the streamline processes. But it’s important, quarter two, 2020 the the new entity will startup, you’ll be able to buy a membership within that entity.
What would happen with all existing MTBA members?
All existing memberships in MTBA would just transition across into that organization at that time. And as quickly as the organization can find its feet and get going, you’ll see new strategies developed, and you’ll see changes to brands and workforces, and hopefully a whole range of new services and outcomes being delivered to members. But it will take a process and, it’ll take contribution by all those involved to do that. Many staff that work for MTBA will end up ultimately working for Aus Cycling and bringing that culture, the skills and what MTBA does, and what MTBA means, that they will inject that culture and way of doing business into the new entity.
How can people reading this get their vote in?
The easiest way simply to do it is to go onto our website, download a proxy form, complete the proxy form, you just have to fill out your details, tick a couple of boxes, and then scan it, and return it by email, and you’ve cast your vote.
For more info: www.auscycling.com.au
Feel like making your voice heard?
You can vote here by filling out this form.