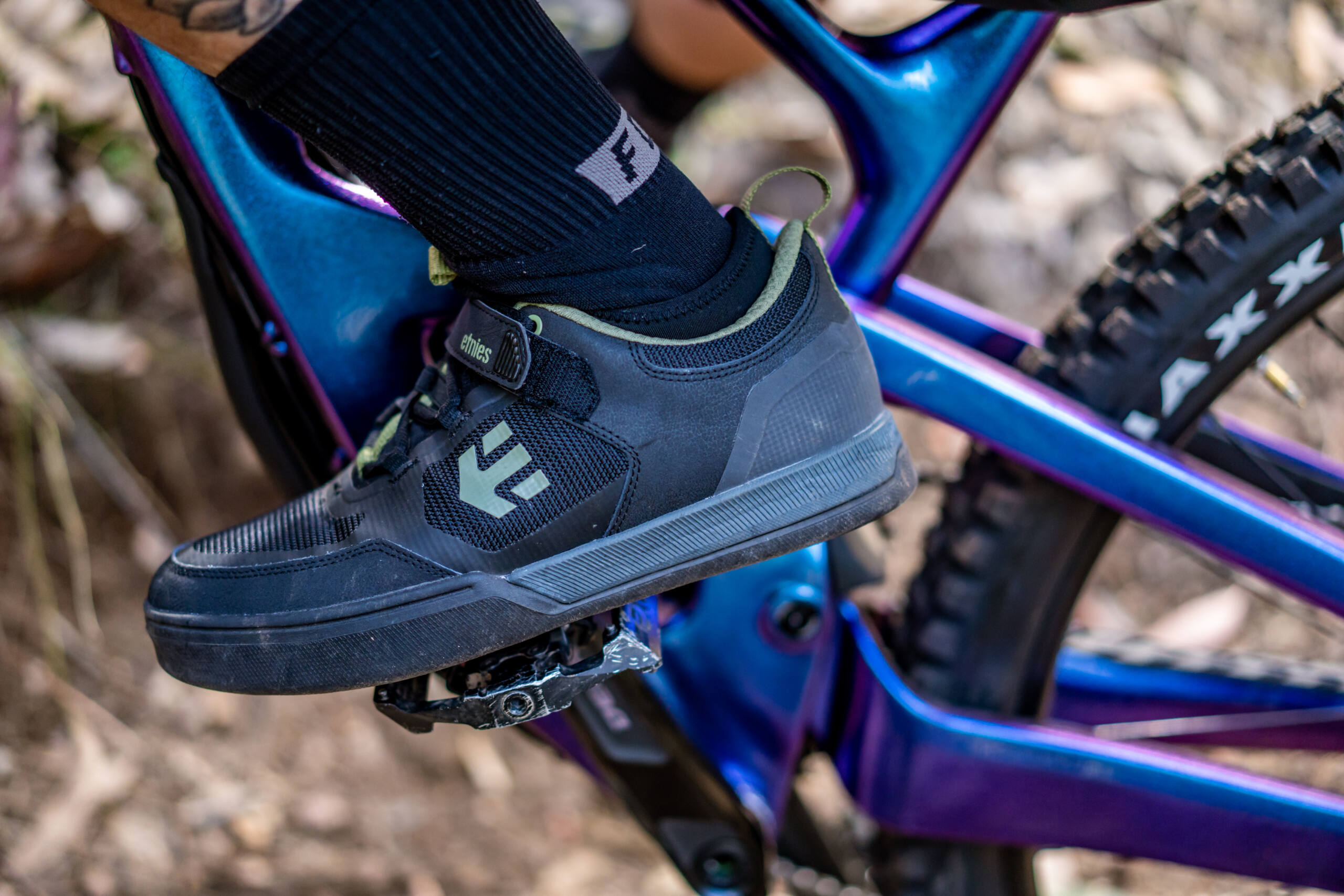 We heard rumours that Etnies were developing their first ever clipless MTB shoe and now they’ve officially hit the market available at better bike stores across the nation. We reckon the ‘Camber CL’ look amazing – skate styling but tailor made for the trails!

Kick us off with a virtual ‘unboxing’, tell us about popping the lid on these guys for the first time and checking them out?

We had heard some rumours early on, spied some pre-production shoes out in the wild and were even lucky enough to get into a pair of the new Camber CL’s well before their release date so the anticipation was super high when they were first received, and boy they did not disappoint! As with all the Etnies range, the first impressions are that of a high quality and very nicely finished shoe, the all-new clipless shoes also boast some unique features hat really grab your attention which we will touch on. Understated in colour, but high on the style radar that s for sure.

Talk us through some of the features and details that the Camber CL is packing?

The first thing that grabs your attention is the compression tongue, a sleeve that lines the the whole shoes, hugging the top and sides of your foot in supreme comfort separately from the outer sole before you even touch the laces, giving a comfortable snug fit with even pressure. Formula-G sticky rubber coats the bottom of the nylon clipless pedal shank, finding a great middle ground between stiffness under pedal, while still allowing excellent pedal feel. An adjustable power strap allows for an on-the-fly adjustment to get the tension feeling just right onto of the laces. An excellent combination of breathable and hard-wearing materials used for the outer of the shoe, again finding great combos of comfort and practicality all the while looking dope!

How it the fit and feel like on foot?

As I mentioned, the shoe has a very unique sleeve that hugs your foot from the inside. At first it did feel a little foreign, however while riding and generally wearing the shoe for some time it was apparent that Etnies really have struck gold with this idea! It puts the all-day comfort levels through the roof, not having to lock down as tight as normal on the laces or strap to get a secure feel!! For me personally, the Eu42 fits bang on when comparing to big name brand casual shoes, with what i would describe as a middle of the road width. 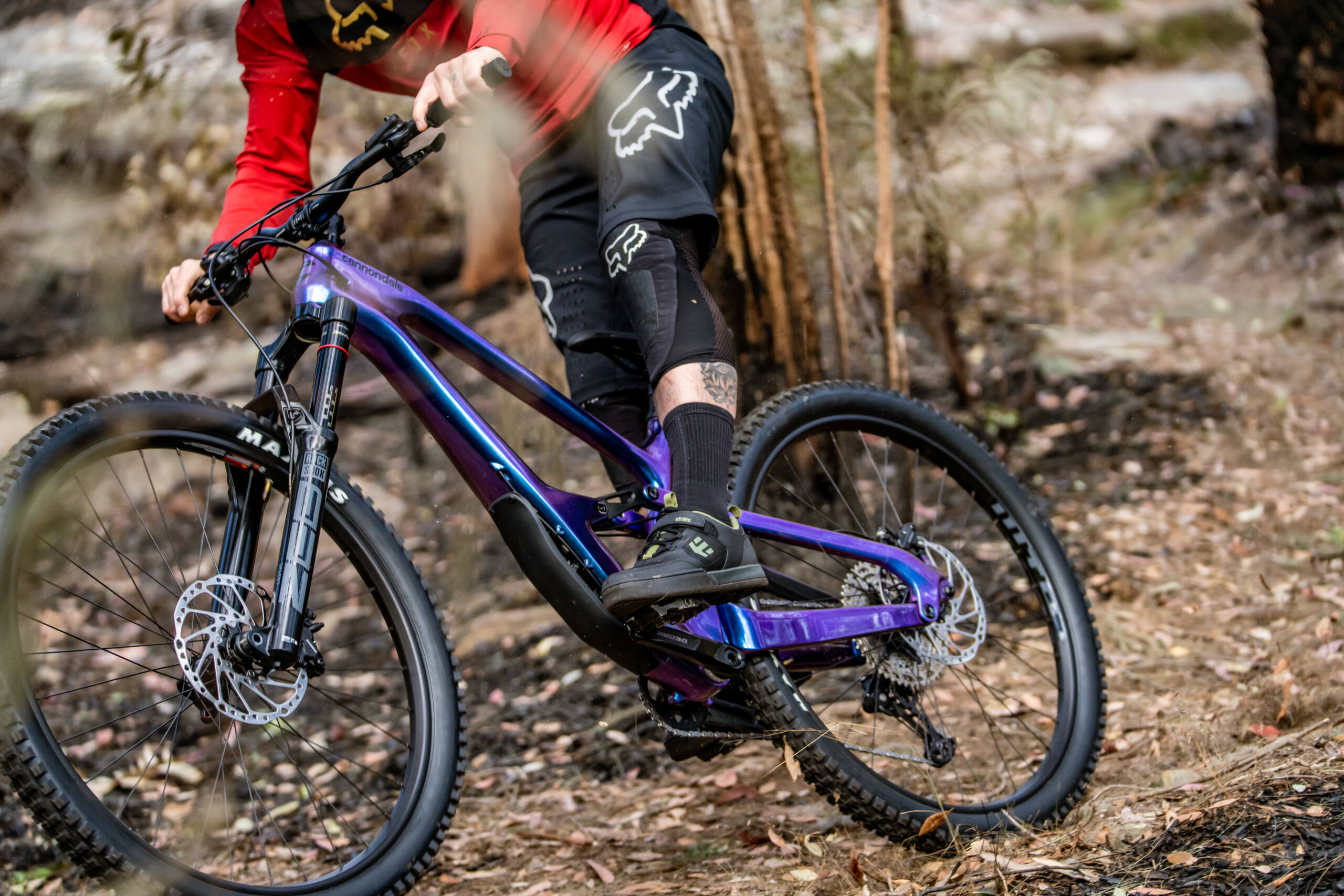 How about when you’re riding – how do they go?

I have spent countless hours in the Camber CL and really do think that Etnies have done an exceptional job in getting all the factors right in the design and construction of this shoe. They have done a great job on finding the middle ground on so many factors, the stiffness is at a point where you aren’t feeling any unwanted flex, while still having great pedal feel. The weight is excellent an often an overlooked characteristic of a clipless shoe, however the protection is second to none, giving confidence that if you take a dab in a hurry, kicking that rock at speed isn’t going to be as big of a deal as it could be! Etnies have used some unique and very high-end materials throughout the whole exterior of the shoes, ensuing that there is enough breathability so they are comfortable all day long, but also hardwearing enough that they will likely be going when the Egyptian Pyramids are due for major renovations.

I think these factors are all great testaments to years and years of Etnies making amazing skate shoes, likely the hardest spot of footwear!

Sometimes in the past we’ve experienced that when a brand dives into the clipless world for the first time, or when the style guide is to make a clipless shoe that looks super cool and super skate, the shoe’s overall performance suffers as a result, does the Camber CL fall victim to that or have Etnies nailed their first clipless offering do you reckon?

Etnies have absolutely knocked this out of the park!! They did have big “shoes” to fill coming in as the first skate shoes company to design and make their own clips shoe since the Vans Warner of days past and I won’t lie I was nervous when I first received them because I was so hyped, but also nervous of how I’d feel if they didn’t live up to it. But they have far surpassed what I expected, and the hopes were already high! As I mentioned earlier, Etnies have for years but up the top of creating some of the world’s best skate shoes, which is likely the hardest sport of footwear, bar none. So, they already knew what needed to go into most of the shoe and just figure out the nitty gritty of the climes side of things and some MTB specific features which they have done in some unique and creative ways that we haven’t seen before! Being one of the 3 contact points to your bike it is a very particular thing to choose your shoes, and don’t get me wrong the Camber CL won’t be for everyone, but if you’re in the Enduro, gnarly trail or DH realms of riding, the Etnies Camber CL really should be on your short list if not the absolute next choice for clipless shoe. [R]