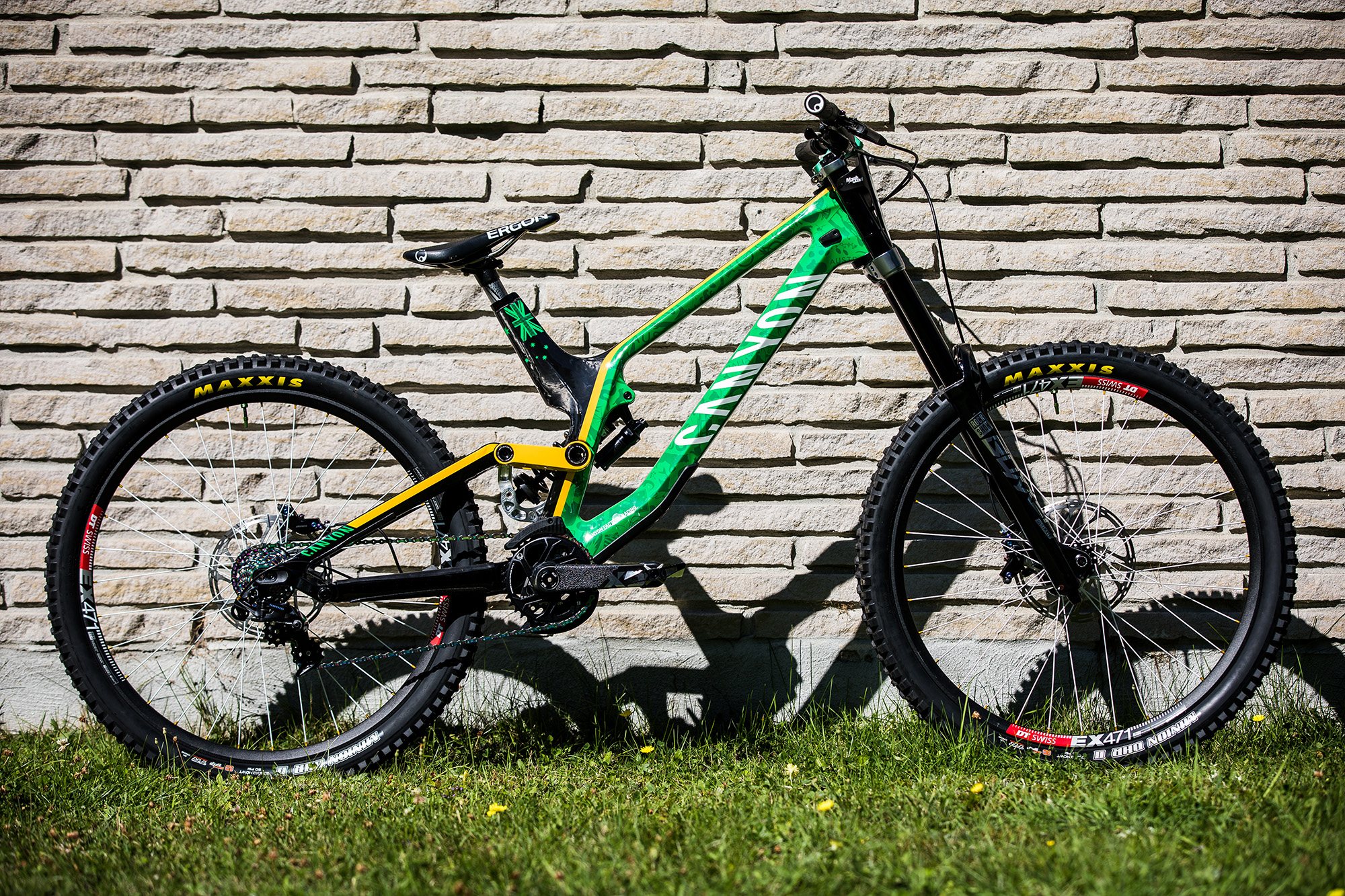 Whilst TB is the one up there sipping Champagne on the podium at pretty much every race he enters, it’s his right hand man Aaron Pelttari (best mate and also a South Oz native) that keeps Troy’s bikes constantly running like meticulously well oiled machine.

We caught up with Aaron to chat about the details of TB’s 2019 World Champs bike. But before we get started with the interview, just take a look at this stunning custom beast, it’s a work of art! 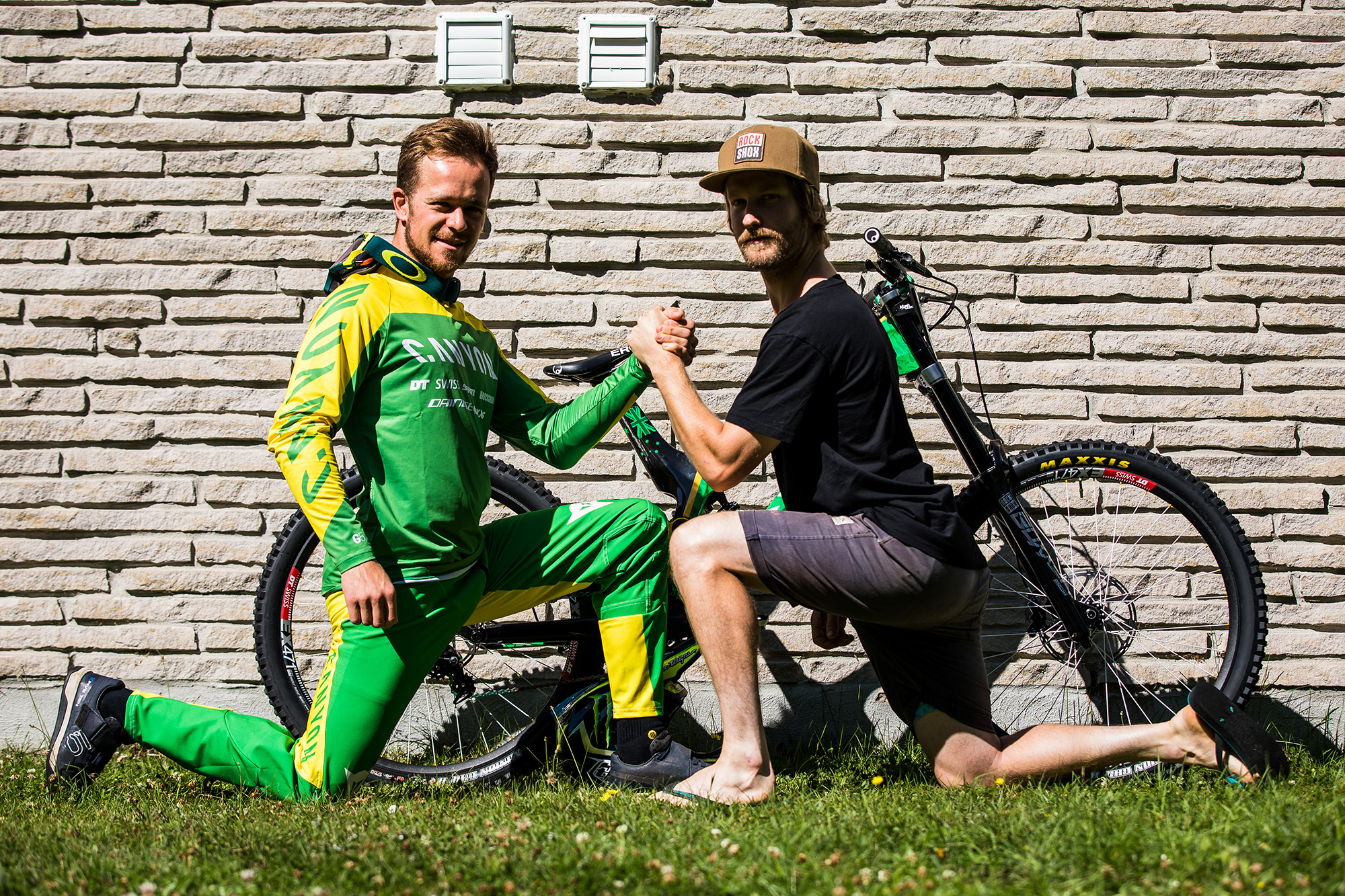 [R]: Cheers for taking the time to chat with us again today mate. This custom colour way and all of the frame details look amazing, eh! Do you guys have involvement into the designs of his Worlds bike or are they just presented to TB as a surprise each year?

Aaron: Oh man, the frame this year is insane, even more so when you see it in the flesh. Stacy from Painthouse customs is the man behind it. I’m lucky enough to be able to have a fair bit of say in the initial ideas, then Canyon and Stacy take it from there and make it what it is! Troy has no clue what it’s going to look like until it’s painted and finished, he gets stoked when he sees details like his dogs on the headtube and all the little things that makes it his. Considering the man gets a lot of bikes he still gets fired up which I guess means we are doing an okay job!

When you get handed a bare frame before the race how long does it take you to build the bike so that it’s ready for TB to drop in for that first run?

Realistically it takes a couple of days to get a bike that is ready to ride. That’s being super picky as we can build bikes in an hour. But Worlds is super special, and everything has to be absolutely on point for first run practice.

In terms of componentry was this bike for World Champs exactly the same as what he was running at the World Cups?

Fairly similar to the rest of the season, We were lucky enough to get some cool drivetrain and brakes from SRAM, but the world cup overall is about as tight racing as World Champs at the moment so we tend to pull out all of the stops for every race through the year!

Speaking of spec, was TB running any custom parts or was it mostly stock?

We had a custom headset cup for Worlds this year that flew fairly under the radar, we were trying to make the front end longer and slacker for the high pace of the MSA track, there was a consideration to go to an XL frame to get the front centre longer for more stability at speed, we ran out of time to test and decided best to stick to what we know with some adjustments. We were also running a few other trick little bits I can’t go into detail on!!

The bike is running a 375 pound spring in the rear. Do you guys play around with different spring rates at different tracks or does TB prefer just to ‘set it and forget it’?

Troy is super in tune with what is going on with his bike, we for sure mix up spring rates if need be, however most of the time we are able to deal with what is going on with the bike with compression or running a slightly firmer/softer tuned shock. We cover all this testing, so when we get to races and are starting to puzzle on setup, we know what to do straight away.

Do you have any secret tricks up your sleeve with the way that you lace his wheels or things that you do to the insides of his hubs to make ‘em that little bit faster?

Haha, yeah for sure we do have plenty of little set-up secrets. I can tell you a few though; we use ceramic bearings for quali and race and we also use different spokes to most other teams. We are really in tune with what is going on with spoke tension. We are lucky enough to have a tuneable wheel set as far as rim width, spoke gauge, tensions, nipples etc. It’s a pretty rad program to be on, that in itself is a massively overlooked part of race wheels I think.

Did TB have the option to ride a 29” Sender?

Yeah he did for sure, We have tested full 29, hybrid and full 27.5” For Worlds we stuck to what we knew could win, realistically the big front wheel may give an advantage, however we had spent an entire off season testing small wheels, getting bike setup, comfort and suspension sorted for that. We were on pace all year, being very close at multiple races, and had fallen to the hybrid hype come Val Di Sole (10th isn’t too bad for a bad result right!?!) We knew we didn’t have that quite dialled yet so stuck to the 27.5 and came close to the win yet again!