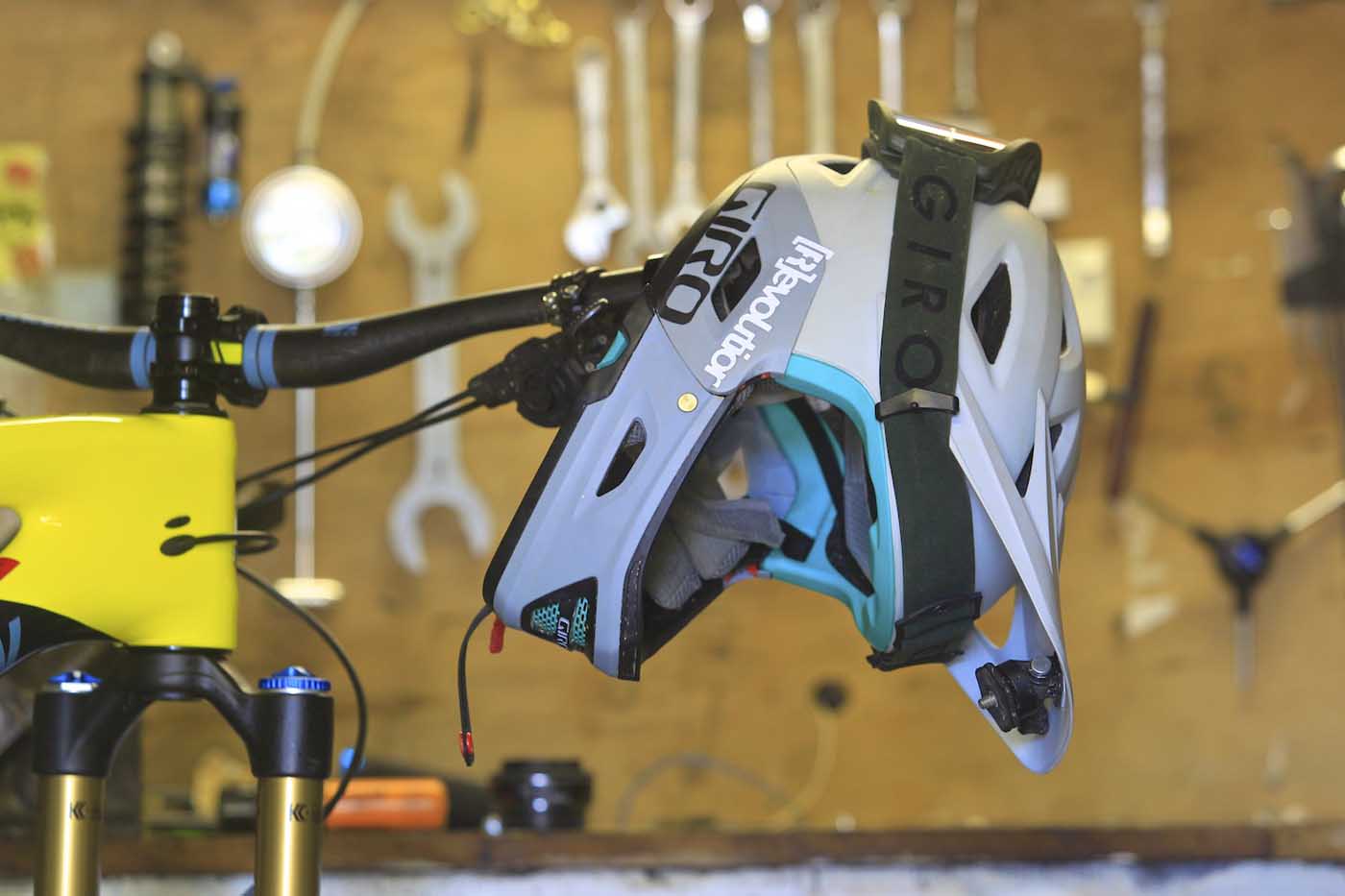 Detachable chin bar full face helmets have come a long way since the iconic Troy Lee Designs/Shoei Edge helmet and it’s ice cream container inspired ‘jaw protector’. Giro’s early attempt at keeping up with the burgeoning freeride scene back in the mid 90’s was the original Switchblade, a wild looking helmet, but really just an XC lid with a bolt on chin piece. Fast-forward to late 2016, Giro has re-imagined the Switchblade and removable chin bar idea for a new generation of riding and it’s a serious lid to say the least.

Easily their most complicated helmet design to date, and one that pushed the design teams vision and skills, the Switchblade is a seriously cool helmet packed with years of R&D aimed at the current state of riding, which of course is ‘sooo’ enduro. Disregarding the hype, our modern day 140mm (+) all-mountain rides are as capable descending as quick as DH rigs from only a few short years ago. As a result, the crashes we’re having on-route down are beginning to require a serious rethink on head protection. The flipside is that these bikes can pedal up anything for hours on end, and that’s damn hot work in a full face helmet come full-blown Australian summer… Enter the new Switchblade. Taking the road less travelled, Giro’s design team worked backwards from a downhill helmet rather than adding to a trail helmet, a move that has produced a helmet that is built to inspire confidence though it’s expanded level of protection. What I didn’t know going into this is that the different DH helmet accreditations they list include open face helmets? Anyway, the Switchblade passes the DH tests and their product team is pushing to ensure that people know it’s a legit DH helmet built to protect your head with or without the chin bar and in the case of ‘with’, handle the odd OTB to faceplate scenario that we all know so well…

On the trail the Switchblade’s extended protection gives you a ton of confidence. And should it get really gnarly, pull the chin bar outta your back pocket for real piece of mind. Rider // Matt Holmes Photo // Richard McGibbon

I’ve used the Switchblade primarily as a trail helmet, with the jaw piece stashed in my hydration pack and at times just out of the back of my shorts, at the ready for when I get thinking about hitting some big lines that are near my regular rides.

It’s pretty easy slotting it together when the going gets gnarly, but does take some practice. Simply hold the chin bar with both hands, locate the two little braille-like bumps on each side of the helmet and slide the two stainless steel inserts into the helmet before rotating the chin bar down, and you’ll hear a reassuring click of metal on metal hardware. Pulling it off is even easier, with two recessed buttons on the bottom of the chin bar, press and rotate up, then slide out. Do it a few times at home and don’t look like a kook when on the trail like I did. It’s easy after a few attempts. Definitely a fan of the metal D-Ring fastener, while plastic clips make on and off easy, there’s nothing like the feeling that you’re strapping on a proper lid.

The Switchblade has great coverage over the back of your skull, eye socket, cheek and temple area that no trail helmet on the market can come close to. This in itself for me is a no-brainer having busted up my cheek/eye-socket in the past. With MIPS integrated into the design of the Switchblade, it’s almost invisible within the inners of the helmet, and works almost as invisibly too. With the helmet fitted correctly, the MIPS layer allows a slight rotation of the outer shell, without having the helmet feel loose on your head thanks to the elastomer connectors. And regardless of the hype and and haters of the MIPS system, all I can say is that I’ll say yes to anything that may up the chances of me getting back up after a wreck that involves my head.

Visorwise, you get two. A regular one that you can position to accomodate goggles on your forehead, plus a set position visor that has an action camera mount underneath so you can POV your gnarly runs. While I’d love to see some metal hardware for the visor, I’ve swapped the visors more than a few times and haven’t had an issue with the plastic threads, you do need to be careful not to cross-thread em though. I’ve also mounted a 360fly 4K camera on the mount with no problems, no coming loose or moving around on my head, falling into my field of vision etc. Goggle retention is stealthy integrated via rubber inserts on three of the rear vents and the moto-esque cheek area fits most goggles I’ve thrown on it. Giro’ new Bloc google does this even more justice, be it on your face or stashed out of the way for the uplift, be it pedal or shuttle.

The two helmets in one theory really comes into it’s own when travelling. A recent NZ trip showcasing it’s versatility and ability to save space and excess baggage costs through only taking the one helmet. Again, I ran the Switchblade primarily on trails in open face form, from epic all day grinds to little local parks ala Wanaka’s Sticky Forest. But once hitting the bike parks in Christchurch and Queenstown, the full face was in full effect, and for good reason.

Downsides I hear you ask? Firstly, it’s a hotter helmet, for sure. However the extra protection around the cheek/eye socket area is priceless. Hotter than a trail lid, but damn cooler than a traditional full face. The ventilation works as it says on the box, especially with the chin bar off, and even with a full head of hair. The side air vents channel air (and the odd insect) into them and do an adequate job of cooling your skull. As a result, I’ve managed to ride this helmet all summer long. Gotta say that the sham-wow-esque padding does a remarkable job keeping the sweat from dripping into your eyes. The pads get soaked and need a wash every few weeks as it has got pretty stinky at times. Secondly, you can’t hear trail chatter as much (from mates not your bike), especially when hauling along. The ear pieces combined with wind noise does make it a little harder to hear. Thirdly, in full-face mode and hitting big lines fast, the chin bar knocked/rattled a touch I gather within the stainless steel hardware connection. While only just noticeable, it had me puling it off, apart, then reconnecting the chin bar to be sure it was connected correctly. That said, Queenstown’s Skyline Park had some pretty serious braking bumps and gnarly lines that had my head bobbing and as yet I’m yet to get the knocking again now home.

“Should you have penchant for getting rowdy on the downhills, drops and booters, but have to ride there to get your thrills, the Switchblade is an epic option”

So, a DH lid? Pretty damn close! While I haven’t had the luck of face planting the Switchblade just yet, it’s solid feel when put together gives me a chunk of confidence. As a trail lid? Easily the best I’ve worn. The fit of the helmet in both open and full face is very good, that extra contact lower around the back of the head and face really gives it a enveloping feel, unlike some trail helmets that feel perched on top of your skull. The Roc-Loc works a treat to really firm it up and lock it on when the full face is off. So should you have penchant for getting rowdy on the downhills, drops and booters, but have to ride there to get your thrills, the Switchblade is an epic option. Travelling to bike parks and out checking the trails on your adventures, again, your luggage suddenly got much more compact with only one helmet in your bike bag.

Want to know more about the design process? Read an excerpt from our interview with Giro’s product manager responsible for the Switchblade below. The interview in full is in issue 45 of [R]evolution, available here.

We hit up Scott Junker, Giro Cycling Helmet Product Manager for an insight into creating the future of burly all-mountain head protection.

[R]: So, the original Switchblade is a removable chin bar helmet from almost another time. Obviously the name is the only connection between ’98 and 2016?

Scott: The name is the same. But they are almost polar opposite helmets.  The original was an XC helmet you could bolt a chin bar onto.  Switchblade MIPS is a downhill helmet you can remove the chin bar from.  Trails are bigger, bikes are bigger, so we wanted to make a helmet that can handle today’s most aggressive downhill riding but still be as comfortable as possible for all day adventures.

Certifying a ‘removable chin bar full face helmet’ for downhill use must have had its dramas for your design team?

It was difficult, but when we realised that some events don’t require a chinbar, and some trails might not warrant one, the design team worked hard. We really didn’t make it very easy on ourselves. Pretty early on we decided that it needed to look totally integrated when the chinbar is in place, as well as make the chinbar easily removable and re-installable with gloves on. We also decided that it was best if there was no obvious or exposed hardware either with, or without the chinbar so ski boot style buckles were out of the question. Oh, and it needs to pass ASTM 1952 with the chinbar removed too. And be well ventilated. And lightweight. Yeah, there were some dramas but we’re all still friends.

The ASTM and CPSC certification for DH helmets covers the new Switchblade, much like all top end DH helmets on the market. You guys are fully behind this new lid by the sounds?

Without a doubt. We realise some riders might want a more traditional full-face look and are continuing to produce the Disciple MIPS for them.  But the Switchblade MIPS is more than capable for any World Cup DH or EWS course. The Switchblade is actually quadruple certified for impacts (CE, CPSC, ASTM and AS/NZ) but because of all the certification stickers needed inside, Australian helmets had to be different part numbers.

We know that helmets are a pretty demanding product environment in regards to impact strain and moisture management.  So stainless was the best material, especially for a chinbar mechanism that is going to be used hundreds and hundreds of times.

At a glance, it’s an amazingly complex helmet; vents, buttons, RocLoc, so much going on. How long has this design been in the works?

The Switchblade MIPS is the culmination of three years of research and design.  It’s definitely the most technically complicated helmet we’ve produced, with the widest combination of integrated technologies.  Despite all of this, we’re proud that it’s simple, intuitive, and use is completely tool-free.