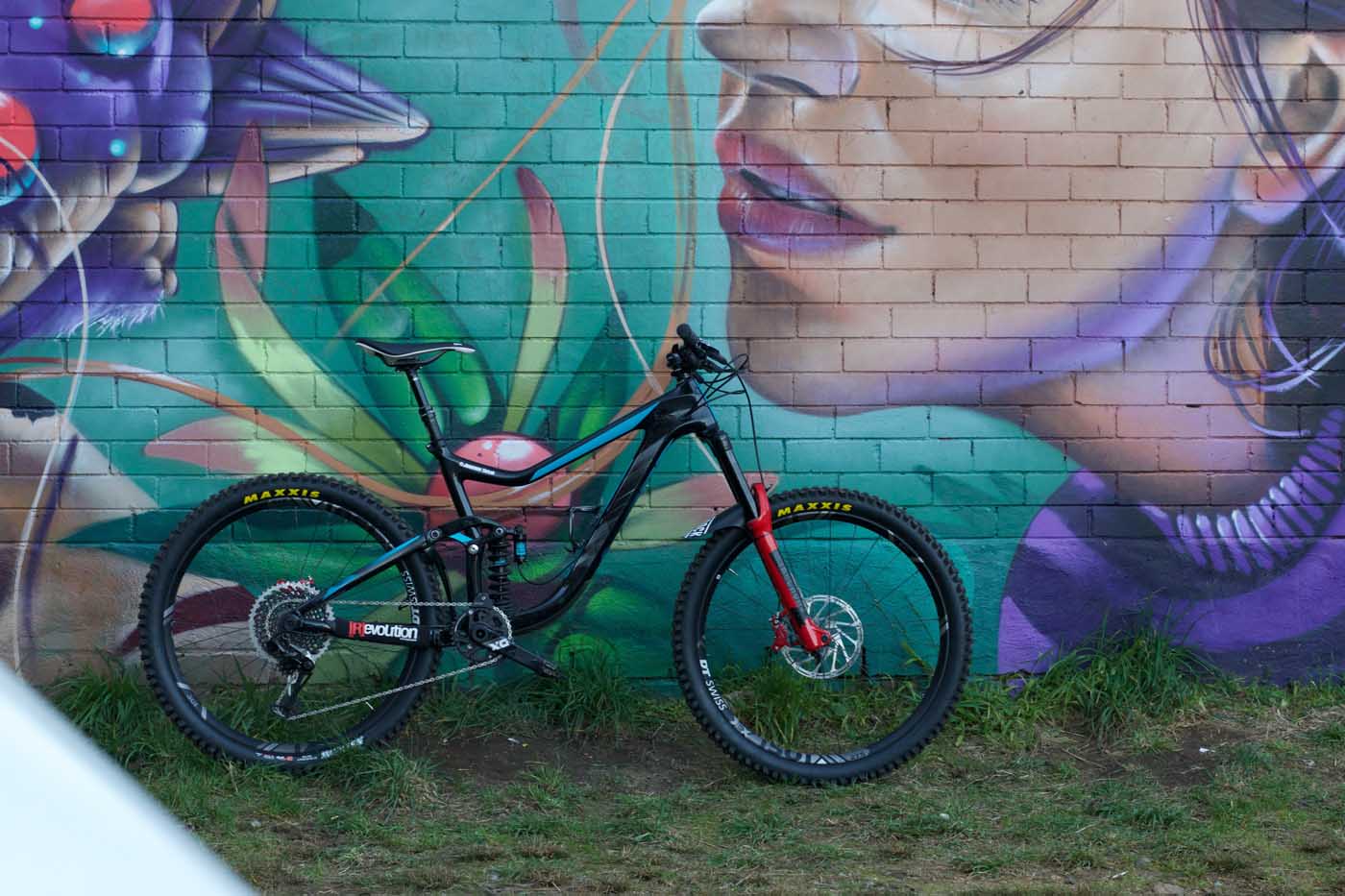 One of the perks of my job is that I often get to travel the world to exotic locations to ride the latest and greatest bikes. Perhaps because I get to sample so many different bikes for ‘work’ when it comes to my personal fleet I am incredibly picky about what I choose. I’ll only buy a bike if I really, really, like the way it rides and I’ll then often hold onto a particular bike for a couple of seasons. I don’t so much mind about the brand name or the look of the bike, I’m just all about how the bike rides and handles. I like my bikes to feel so comfortable, so natural, that when I sit on them they feel like an extension of my body almost.

“You don’t test ride the Giant Reign Advanced, it test rides you!”

Midway through last year I spent a couple of days in the North of Italy at a Giant press launch where I got the opportunity to test ride the new Reign Advanced for first time. Each day we rode the longest and rockiest trails I had ever experienced, down these massive mountains and each run would often last several hours (no shit!). By the end of the trip I had discovered that “you don’t test ride the Giant Reign Advanced, it test rides you!” What a machine! I pushed it as hard as I could, often scaring the shit out of myself in the process, and I don’t think I even came close to finding this bikes limits. The R&D team at Giant had done an amazing job of transforming the existing Reign, which was essentially a sluggish handling downhill bike with single crown forks, into an incredibly fast and efficient Enduro race bike. The thing has a super slack 65degree headangle and packs 160mm of travel at both ends and yet somehow you can still pedal it up hills with ease!? With its new suspension kinaesthetic the bike sits nice and high in its travel. And with that trunnion mounted coil rear, oh my goodness, it’s just so active and feels silky smooth as it gobbles up the trail beneath you.

I needed that bike in my life. As soon as I got home I put my name on the waiting list (the production bikes were still a couple of months away from landing) and handed over my credit card details. Standing at 6’2” meant I could ride an XL but I opted for a Large as that was the size I rode over at the launch and it felt perfect. Giant offer the carbon fibre Reign Advance in two spec levels; the Advance 1 retails for $6499 and the Advanced 0 which retails at $8999.00. Both bikes feature an identical carbon frame. I opted for the ‘0’ model as I particularly wanted the coil rear shock which only comes on that bike. The rest of the parts spec that came on the bike are all top shelf and really you wouldn’t need to change a thing.

Me being me, I have of course swapped out a stack of stuff. (Partly because I’m a wanker and partly because I have access to sweet stuff, but mostly because I’m really picky about my set-up and always like to trial different components and combos). Here’s a rundown of my current set-up:

One of my favourite upgrades on the bike would have to be the luscious red RockShox Lyrik forks I’m running up front. The bike actually came with a set of previous model Lyriks which worked great, but when RockShox announced the new RC2 model with the Charger2 Damper and DebonAir, heck, there was no way I wasn’t going to try and sell my spare kidney in order to get my hands on a pair. It also presented me with the opportunity to go up to 170mm of travel (stock on this bike is 160mm) which I guess has slackened the headangle a touch more as well. Usually if I had the choice I’d actually opt for less suspension travel rather than more, but the new Reign is so efficient in how it works I figure I might as well grab a bit more travel for those days that I hit the big lines. Out the rear I’m still running the stock RockShox Super Deluxe Coil which puts out 160mm of travel using Giant’s popular and proven Maestro linkage (and seriously this entire package rocks my entire f*king world right now it works that well!) With my current #dadbod I weigh around 86kgs and I find that the 450pound spring that came stock is pretty much perfect for me. A couple of buddies that have bought the same bike have switched to firmer springs but I’m loving mine as is. When these bikes came out RockShox didn’t have their nifty new TwistLoc remote lever in production, which meant the bike was shipped with a (I’ll be honest, super chunky, ugly and cumbersome) OneLoc lever. Luckily, TwistLoc’s are now on the market and I jumped at the chance to fit one. It kind of works a bit like a ‘grip shift’ I guess, with the remote built into the inside part of the left hand grip. I’ve had it on the bike for about a month now and I really rate how it works. I’m actually finding that I’m using the lockout feature a lot more since I switched to the TwistLoc, probably because it’s so much more intuitive to use. You don’t have to give it a second thought.

Frame wise, everything is still stock and has skipped a beat. Maintenance wise I haven’t needed to service or replace any of the pivots, bolts or other hardware. Come to think of it I haven’t even had to torque any of the pivot bolts or anything which is pretty impressive given how much riding this bike has seen. The frame has collected a few scratches and wear and tear as you expect from nearly a full year of trail adventures. The internal routing through the mainframe is nice and neat. The cables inside the frame are each housed inside full-length foam tubing which I’ve noticed when I’ve installed fresh brake and gear cable and clearly they do their job well as the bike is deadly silent out on the trails.

In terms of sheer performance the most noticeable upgrade I made was switching to a set of the new SRAM Code RSC 4-piston brakes. Pardon my French, but these things are f*king phenomenal! They’ve got so, so, so much power, yet I feel like I can modulate all that power really easily though the lever feel/feedback. Considering the entire units only weigh a handful of grams more than a pair of SRAM Guide brakes, they’ve have to be one of, if not, the best upgrade you could possibly make to your Enduro/gravity bike.

Wheels wise, in the beginning I wasn’t excited when I saw that the bike had been spec’d with a set of alloy DT Swiss rims. I’m a bit of a snob for carbon hoops and I straight away assumed the wheels on this bike would be one of my first upgrades. However! During those mega days of bombing down hills over at the launch in Italy, I ferociously dinged each wheel into that many big rocks I lost count, and never once got a flat tyre. Plus the fact that the EX 1501 rims are nice and wide @ 30mm internal, and they weigh no more than a carbon rim… To this day I still haven’t felt the need to experiment with a different wheel set. Tyres wise the stock Maxxis rubber eventually wore bald and after a few different swaps during the year I’ve currently got a set of Minnaar’s new signature ‘Assegai’s on there and I’ve found that the level of grip that they deliver is ridiculous. Being a DH casing, yep, they are kind of on the heavy side for what I’d usually fit to my trail bikes, however I wanted to give them a go and with the amount of new found grip that I’m able to enjoy out there on the trails I doubt I’ll ever want to take those bad boys off.

The rest of the parts I’ve changed are pretty much the ‘touch points’. Putting a Reverb dropper post on there was a no-brainer! In my opinion, they’re still the best dropper posts on the market by a long way. Especially when you combine it with that new X1 paddle style lever – brilliant. I love how understated and ‘low tech’ the Fabric seat that I’m running looks. Obviously the main reason I’ve got it on there though is because it’s insanely comfortable. I rarely will even wear a chamois any more with that seat on there. Pedals wise I made the switch to HT’s about a year ago and pretty much run them exclusively on all my bikes now. I’m a big fan of the stability and the clip in-and-out feeling that they deliver. I actually experimented with a few different sets of handlebars before settling on the new Truvativ ‘Jerome’ signature carbon bars. They measure at 760mm wide and their sweep feels the most natural of any bar I’ve ridden. I carry a Dynaplug ‘megaplugger’ on the underside of my bars and I’ve used it a BUNCH of times to repair holes in my tyres and buddies that I’ve been out on the trails with. I used to only carry a Dynaplug on longer rides, but this version is so light and the way it mounts is really neat, so I just leave it on there all the time now. Same with the RockShox mud guard down on my forks – I used to only run that if the trails were wet but again, it’s so light, and works so well at preventing trail crap from flicking up even when its dry, so I just keep it on all the time now. And finally, one of my favourite gizmos is the Specialized SWAT CC which allows me to keep a multi-tool hidden in my steerer tube. It’s so neat and tidy. I use it pretty much every ride – love it.