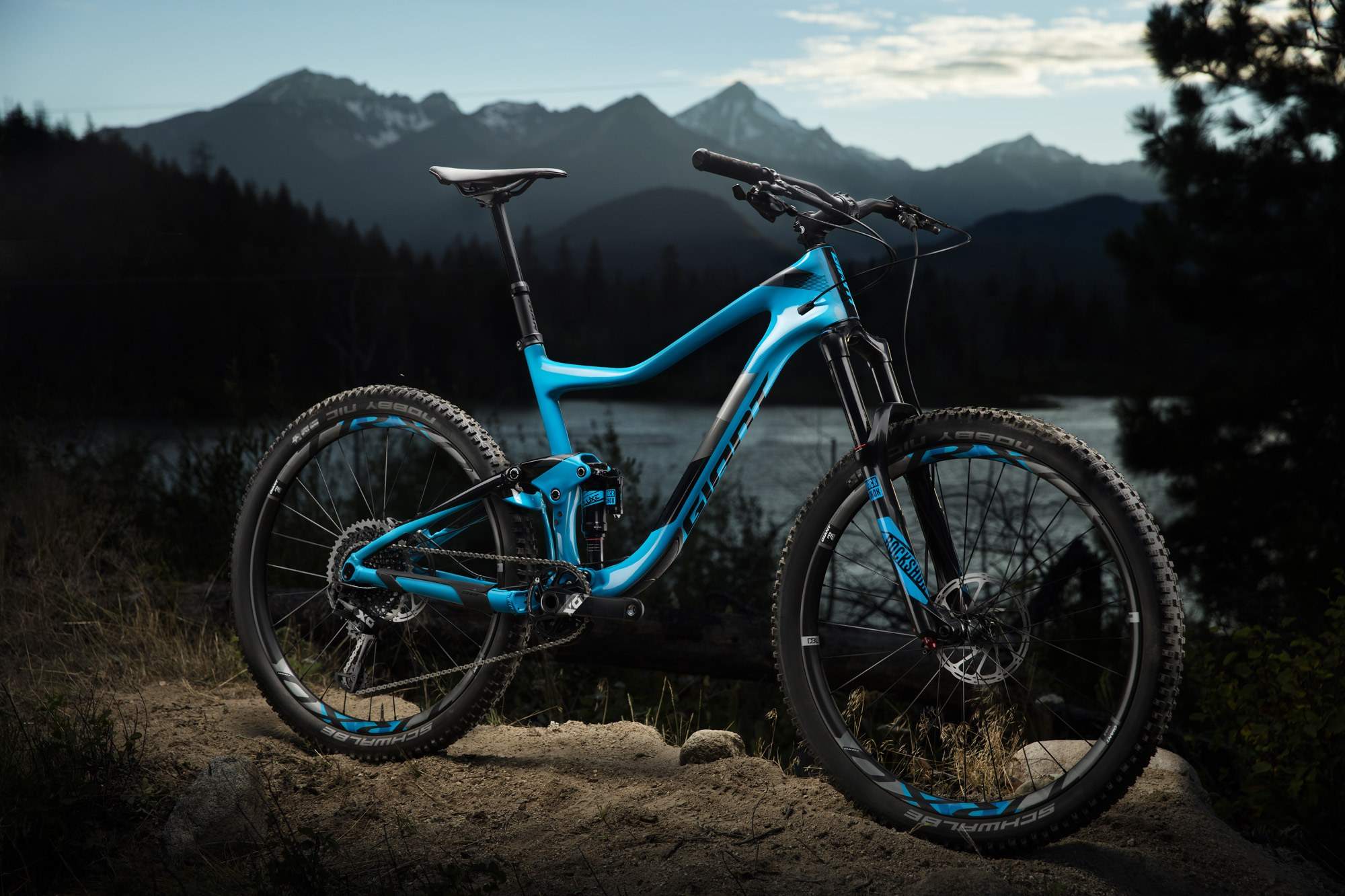 A wolf in Sheep’s clothing

Giant’s latest generation do-it-all trail bike, ‘Trance’, is certainly a stunning looking machine. Just take a glance at those sleek frame lines, and its curves in all the right places. Its appearance is so gentle on the eyes, you get this feeling that butter wouldn’t even melt in its innocent little warm mouth… Ha, do not be fooled by its looks. In reality, the new Trance is a total wolf dressed in sheep’s clothing. This thing is ready to attack! The new Trance is ready to shred a trail to pieces for hours on end. When you climb aboard this bike, you’re about to have a smile put on your face that you won’t be able to get rid of until the end of the ride. For sure this is one of the best looking bikes Giant has ever made. It is also the epitome of the saying, ‘never judge a book by its cover’.

So what’s new about the 2017 bike? Well, the Trance’s 27.5” wheels and 140mm of rear travel have remained, but everything else on the bike has been supercharged for performance. A new frame design, new geometry, new suspension ratio, boost hub spacing at both ends (110mm front/148mm rear) and an increase in front travel which now sits at 150mm. All of this combined delivers a ride characteristic that is more efficient up the hills and more capable down the hills than ever before.

When Kevin Dana (Giant’s legendary lead man in MTB development) and his team of designers began working on the new bike, they set out to achieve two things – to create a bike that outperformed the previous bike in every category (pedaling efficiency, descending ability, overall balance and handling) and also make the bike’s athletics as pleasing as possible.

Kevin felt that the one area they could develop the most benefit from, was the bike’s rear linkage configuration and so the team got to work re-designing the bike’s entire rear layout. They wanted the bike to sit higher in its travel than the previous Trance, and they also wanted to reduce the amount of air pressure that the rear shock needed. The previous bike demanded a huge amount of air volume in the rear shock which really pushed the shock to its limits and resulted is a ride characteristic that felt quite harsh when pedaling sitting down.

Giant have managed to solve this problem by developing a new one piece molded carbon upper link which has allowed them to reposition the entire Maestro linkage. The new link is constructed entirely from molded carbon, and weighs half as much as the previous alloy link.

It is interesting to note that the new carbon link is utilized on all the new Trance models, including the entry level alloy bike. A key part of the development process was partnering up with Rock Shox. Working together, both brands spent a huge amount of time innovating the bike’s rear shock. How could they gain the performance improvements that they sought whilst continuing to use conventional ‘top and bottom’ eyelet shock mounting? They couldn’t. And so the decision was made to go with a trunnion mount. The shock is attached to the frame on each side of its body, rather than using a traditional DU bushing at the top of the shock. This design greatly increases stiffness to the frame and allows a longer shock stroke in less space, and a lower leverage ratio. The new shock also features ‘metric sizing’. Another benefit of the trunnion mount and longer shock stroke is less air pressure. Lower pressures improve the shock’s performance, enhance the shock’s durability, and allow the shock’s damping circuits to do their job of controlling the ride. The results? 140mm of pure trail eating performance. A big leap forward for Giant’s already impressive Maestro suspension design.

Another improvement the team were looking to gain was to lower the Trance’s center of gravity. And they achieved this in a variety of ways. Compared to the previous bike, the main pivot location on the 2017 model is now positioned lower on the seat tube. This not only drops the weight lower in the frame but it also allows the Trance to fit a longer dropper post as the seat tube now has room where it is interference free. The bottom bracket has been lowered by 5mm and those rear chainstays have also been shrunk 5mm. The chainstays now measure 435mm.

The Trance is offered in 3 size options; small, medium and large. For all frame sizes, their top tube lengths have been extended 10mm. This of course increases the bike’s reach, giving it more of a roomy ride feel and increases that sense of stability whilst maneuvering the bike around the trail. Whilst the amount of travel has been increased up front to 150mm, the bike’s headangle remains at 67 degrees. Having ridden the bike a lot I must applaud Giant for keeping their headangle in check at 67 degrees as it toes perfectly between being just slack enough that the bike handles well on the steeper faster stuff, but at the same time it doesn’t feel at all sluggish when navigating the climbs.

Five models of Trance are going to be available at dealers across Australia. Two ‘Advance’ models which feature the carbon fibre front triangle. And three standard models which utilize an alloy front and rear triangle.

Pricing starts at $2699.00 for the alloy ‘Trance 3’ and goes up to just over $8000 for the very top of the line carbon ‘Advance 0’, which is the model featured throughout this article and the bike that I rode during the test period.

The Advance model’s frame is constructed using high-performance grade raw carbon fibre and custom resin. These frames are each skillfully made in Giant’s own composite factory. The frames handcrafted monocoque construction make them extremely lightweight, stiff and compliant. The frame boasts an oversized bottom-bracket/chainstay area with a fully integrated 92-mm wide BB shell. The addition of asymmetric chainstays provide additional stiffness on the driveside and stability on the non-driveside. Up front, the frame features Giant’s Overdrive headtube system, which helps to provide the bike with optimal steering stiffness whilst you’re cutting shapes out on the trails.

To experience the new Trance first hand, [R]evolution was recently invited over to Canada to put the bike through its paces on the epically rugged backcountry trails of British Columbia’s Chilcotin Mountain range.

We spent three days in the saddle, clocking up anywhere between 5-7 hours each day. And the trails we rode were certainly no walk in the park. You had to burn it to earn it out there in the mountains. On the first riding day, we actually got transferred way out into the wilderness via seaplane. We got dropped off at a spectacular crystal blue lake where the trail started. This part of the world is completely cut-off. There are no roads, no nothing. The only way to experience it is on horse back, or mountain bike. And I’ll opt for the latter every time. And so with our riding packs loaded with supplies we saddled up and began our adventure…

As I touched on earlier in the piece, myself and the rest of the gang were all riding the top of the line Trance ‘Advance O’ which comes spec’d with all the top-shelf goodies, including a 12-speed SRAM Eagle drivetrain, Giant’s brand new TRX carbon fibre wheels, a set of Rock Shox Pike RCT3’s up front and a Rock Shox Super Deluxe RC3 shock in the rear. With a price tag in Australia of $8299.00, this is almost certainly the best value complete premium level trail bike on the market right now.

The start of the ride had us climbing towards the clouds for a solid hour. A mix of lung busting pedaling and hike-a-bike-pushing up sections that could almost have needed a ladder. From the outset of the ride it became clear that the Trance’s climbing manners have improved. The Maestro is tuned such that I felt comfortable leaving the shock setting in the fully ‘open’ position the entire ride. In fact, I don’t think I ever once found myself reaching down to change compression settings even on the steep climbs towards the end of the ride, when I was well and truly gassed. If I had to stand up in court and testify one thing about how the bike climbed steep and technical stuff, I’d have no qualms in stating, “Extremely well”.

I’ve also got to say I was really impressed with the bike’s rear suspension tune. It’s amazing how plush and active it felt, especially considering it is only running at 140mm of travel. Due to the lower air volume in the shocks canister, it delivers a lovely light initial movement into the suspension travel. For sure helps the bike feel glued to the terrain and track in the corners. In fact it almost felt like a coil in the beginning of the stroke, and very supple off the top. On the rough section, big hits were met with a nice ramp up and a controlled return to ride height, no bucking or packing down was present.

Whilst the Trance of yesteryear sat in Giant’s range very much as a mild mannered trail bike with one foot firmly in the XC camp, the new Trance is a much more capable beast.

Its far less lycra inclined I guess you could say. Giant have spec’d these bikes so that they’re ready shreddy! You’re getting chunky tyres, nice wide 750mm handlebars, a Pike fork up front, and the list of big mountain friendly parts goes on and on.

Kevin and his R&D team are onto a winner with this one. The new Trance Advanced does what many claim to do but few ever come close to doing, and that is creating a true ‘do-it-all bike that’s capable of mixing it up in an XC race on Saturday and then racing a gravity enduro on Sunday without changing a thing on the bike. Thanks to its clever design, the new Trance shows just how far suspension performance and mid-travel bikes have come. You can be sure the 2017 Trance will remain a modern classic for several seasons to come.