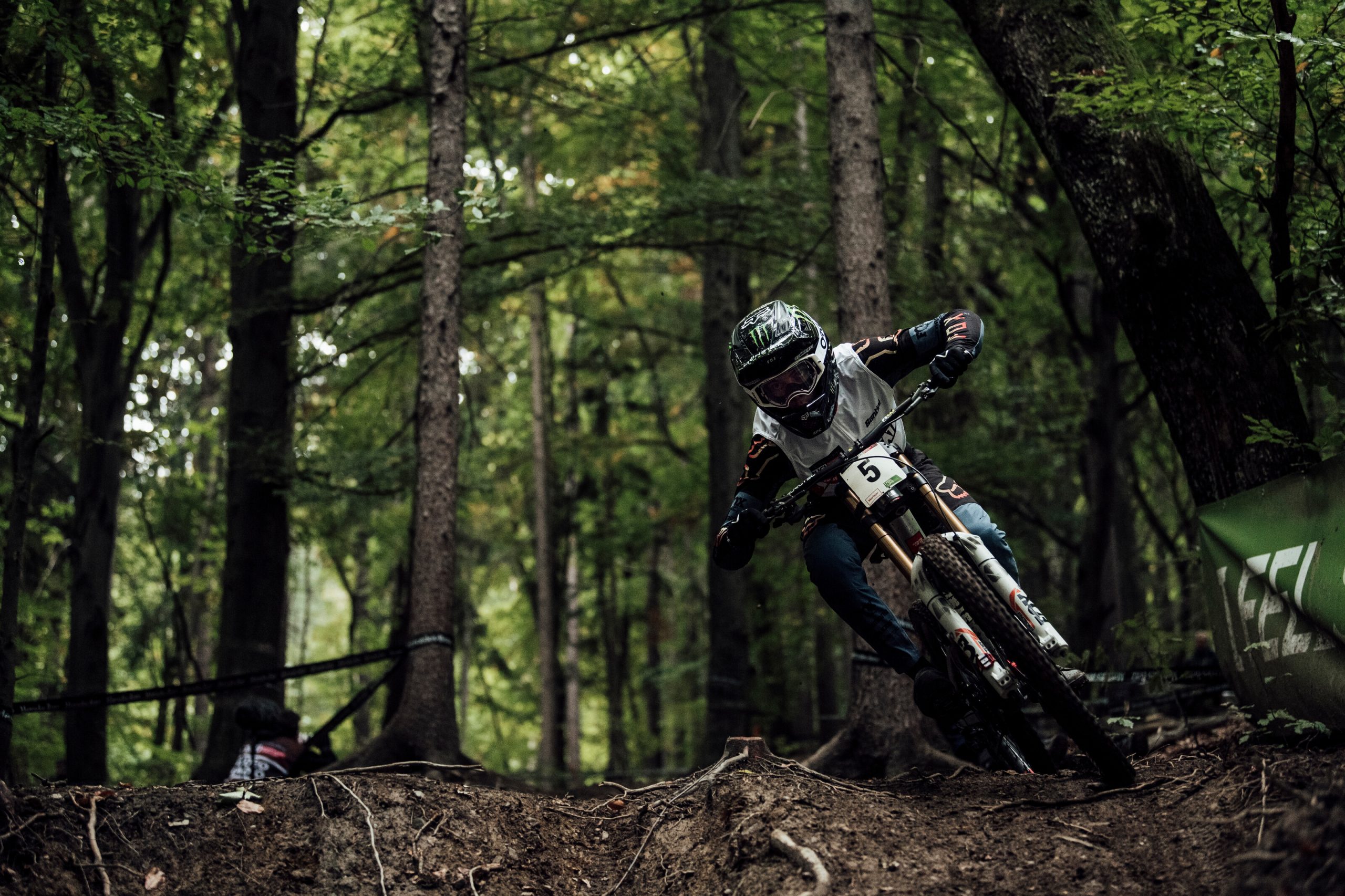 Training on Wednesday had been sunny and dry, but by the time qualification rolled around on Thursday the riders were back to heavy rain, cold and mud. New men’s world champion Reece Wilson continued his fine form by going fastest in qualifying, however a practice crash meant he had to sit out the race itself. Tracey Hannah launched down the course, packed with slick roots and menacing rocks, 5.348s quicker in qualifying than nearest rival Myriam Nicole.

“It is totally amazing. Today I was really motivated. I am so happy. The conditions were hard – so slippery. I tried to push where I knew I was safe.”

“I focused on not crashing on the first corner. It was tough out there. All the podium boys were on mud tyres.” 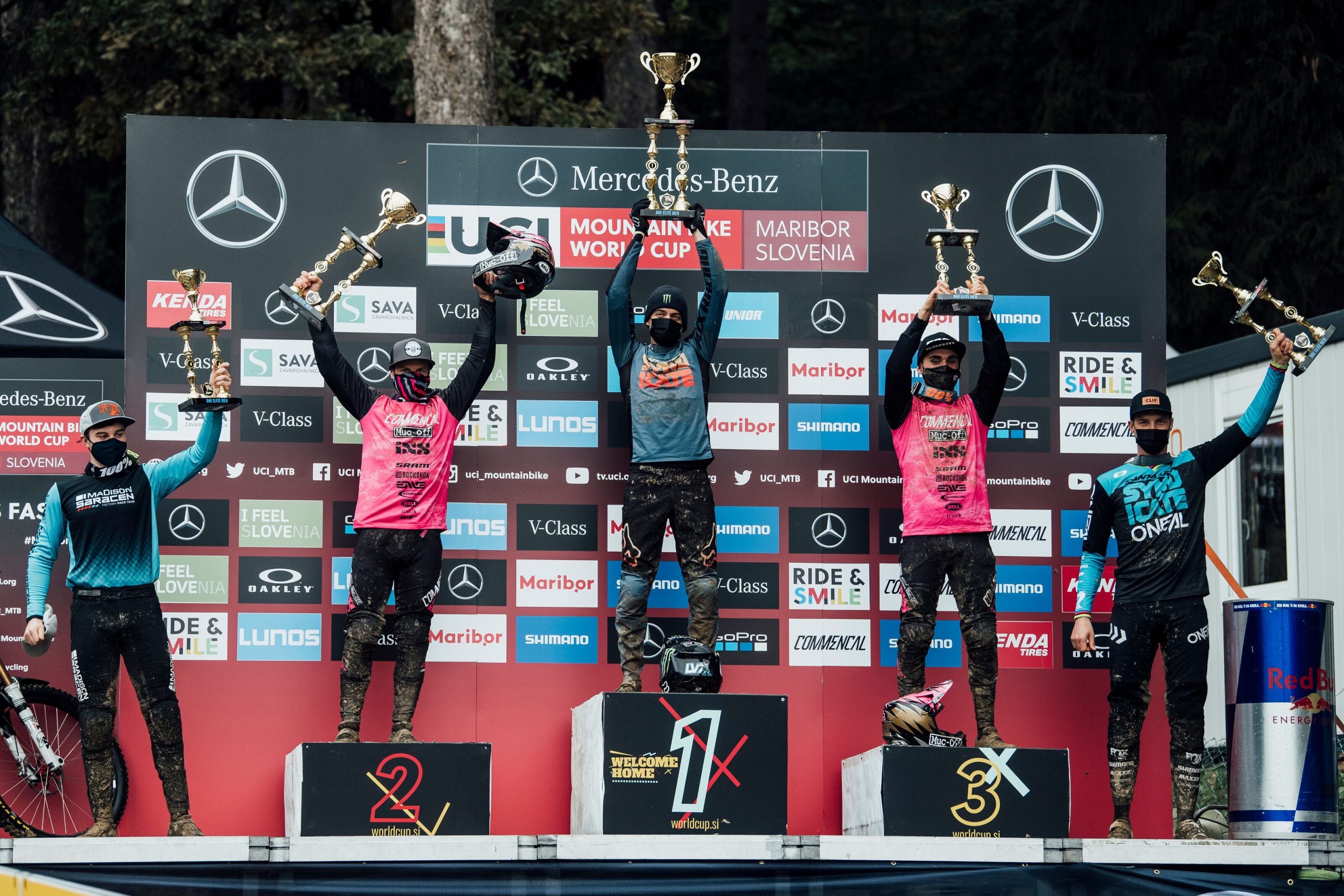 Wet weather’s gave us some wild racing over the last week, but finally the sun came out and for the second of the weekend’s races. Four changes to the course from Friday, plus a re-taping of the rock garden entrance, made for another thrilling final.

The women’s race runs followed form from qualification with the green splits coming thick and fast as the riders sped down the track. World Champion Camille Balanche pulled off a clean run to take the hot seat, then Monika Hrastnik went fastest with another tidy ride, both riders safely avoiding crashes that had upset their round one runs. Tracey Hannah was next to cross the line and duly sliced even more off the fastest time. The overall winner from last year revelling in the drier conditions rather than the semi-slick surface of qualification. However, Hannah had no time to get comfortable on the hot seat as Marine Cabirou once again saw green at the finish. The winner from Friday was back with that no-nonsense style that makes her such an exciting rider to watch.

Cabirou was immediately under pressure from Nina Hoffmann. With both red and green splits appearing as she descended down to the finish, there was minimal room for mistakes. A supremely precise ride over the jumps and into the arena was enough to post the fastest time with just two riders to go. Hoffmann took her maiden World Cup win by 1.899s over Cabirou, who won back the overall leader’s jersey from Nicole who still managed to finish fourth. Eleanora Farina went one better than Friday to take third and Tracey Hannah rounded out the podium in fifth.

Andreas Kolb was next to see the gantry lit up green as he crossed the line. Then, after a qualification run that didn’t go to plan, Greg Minnaar’s trip back to the drawing board yielded the improvement he was looking for and he took up position in the hot seat. It would be some time before he was bested by Ángel Suárez who, on an impressive comeback from injury, was again pushing the pace and going 0.422s faster. Into the top 10 and Aaron Gwin, Finn Iles and Matt Walker all went fastest, shaving just a few 10ths off each time.

Then came another stellar display from round one winner, Loris Vergier. The splits went green all the way down as he perfected lines over the relentless roots and carried speed across the cambers. Vergier had set down the standard. Troy Brosnan was the only rider able to deny the French another win, but the Australian never really looked like he could steal that top spot but kept it together for a solid 5th on one very taxing weekend.