Taking the top steps of the podium at the UCI Mountain Bike World Cup downhill event in Maribor were the DHaRCO clad French duo of Myriam Nicole and Lois Vergier.

Tahnée Seagrove was the first of the big names to drop in and she duly turned the splits green the whole way down to unseat Mille Johnset. The crowd – an absent element from last year’s rounds in Maribor – were treated to a brilliant run from their Slovenian star, Monika Hrastnik. Having won the European Championships last week on virtually the same track, she pulled back a 2.164 deficit at split one to go fastest by a tantalisingly close margin of 0.004 seconds. The Italian Champion, Eleonora Farina, took advantage of Hrastnik’s slow top section and kept the green splits rolling. Farina had looked especially dialled in morning practice and that translated into finals as she went fastest by 3.171 seconds. World Champion Camille Balanche said she was struggling with the track during practice, but went on to go fastest in Timed Training and third in Qualification. However, her finals run was not quite on-point and she lost a lot of time in the final third, ultimately slotting her into third place.

Second in Quali’s, Myriam Nicole, was already almost three seconds up by split two, and although she lost some time lower down the track with fatigue setting in, she crossed the line fastest with one rider to go. After a storming Qualification, Vali Höll could not find the speed in her finals run, finishing down in sixth leaving Nicole to claim the win and takes the World Cup leader’s jersey. Farina was delighted with second place, 1.322 back. Balanche, Hrastnik and Seagrave completed the podium. 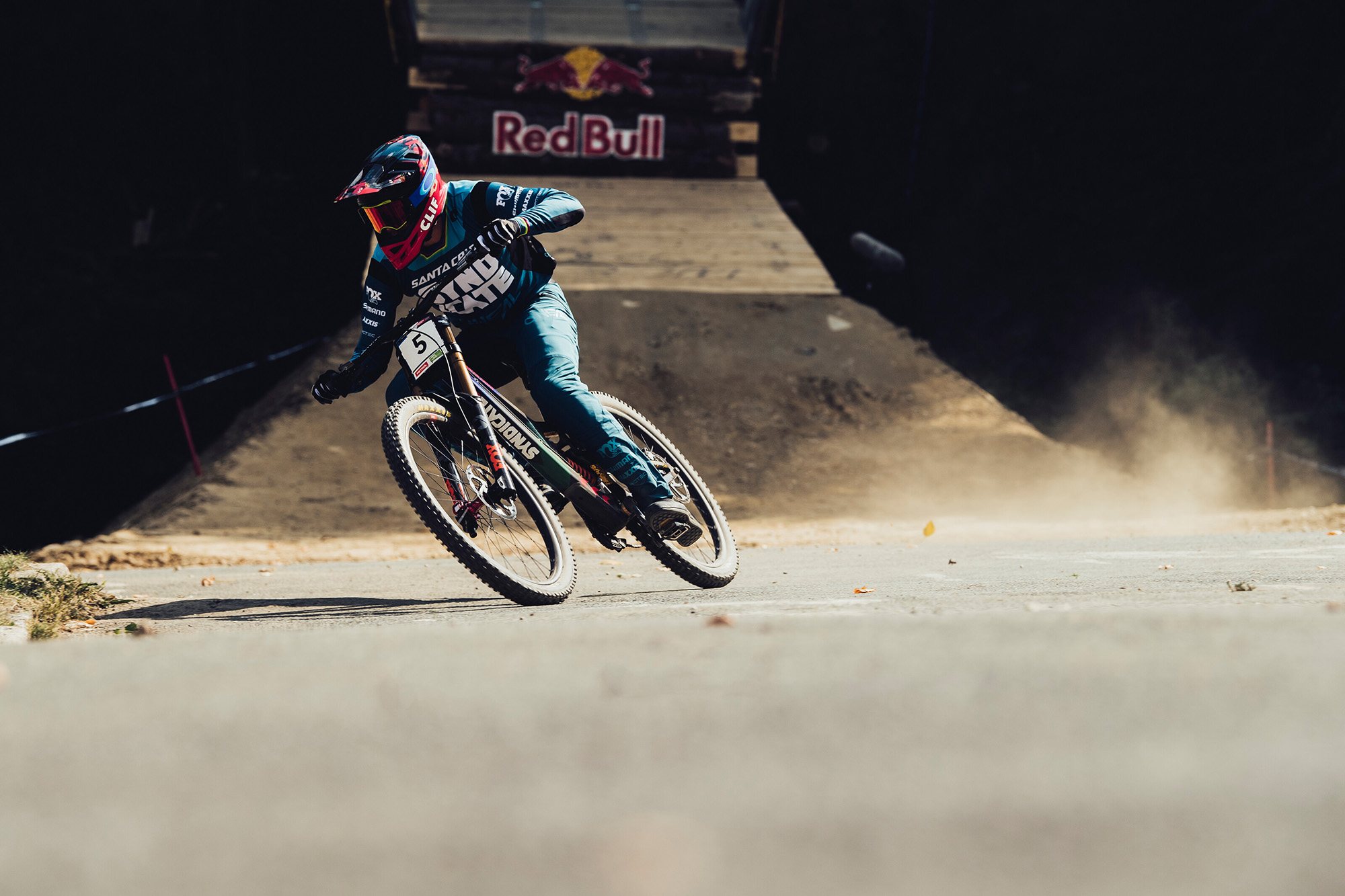 The men’s finals headed into the top 20 with the French Champion, Benoît Coulanges, having just taken the hot seat. Notable mentions go to Andreas Kolb for going fourth despite a snapped chain early in his run, and Dan Slack, the first-year Elite who went third, but it wasn’t until Loïc Bruni that Coulanges’s time was beaten. Connor Fearon was looking back on form back in the top 20, before taking a wild ride after losing his front wheel in the dust and roots and fellow SA ripper Troy Brosnan while looking as smooth as ever had to settle for a 12th place. Danny Hart and Matt Walker were both in touch through the first half of the track, but slipped down the standings during the lower sections. Greg Minnaar, on the other hand, was showing red splits early on, but gradually clawing back tenths to finally go fastest by a nail-biting 0.092 seconds in what proves that he is nowhere near his use-by date at almost 40!

Laurie Greenland pulled a similar trick, knocking Minnaar off the hot seat before he’d had time to draw breath by an equally exciting 0.082sec. The penultimate man on the hill was the number one board of Thibaut Dapréla who was quickest through split one and built his lead all the way down, crossing the line 1.085sec to the good and obviously stoked with his performance.

A French win was guaranteed, but would it be the winner from the last round in Les Gets, or the double winner from last year in Maribor? Loris Vergier was, he said, going slow to go fast; a typically puzzling statement from a rider who made perfect sense of this track. Down at splits one and two, a mix of his light and flaty style alongside brute strength on the pedals he tucked his way his way toward a 1.138 second advantage by split four and a winning margin of 1.775 to secure a perfect World Cup weekend.

Missed all the action live? Well you can kick back, enjoy the lockdown and watch the full replay here on Red Bull TV.