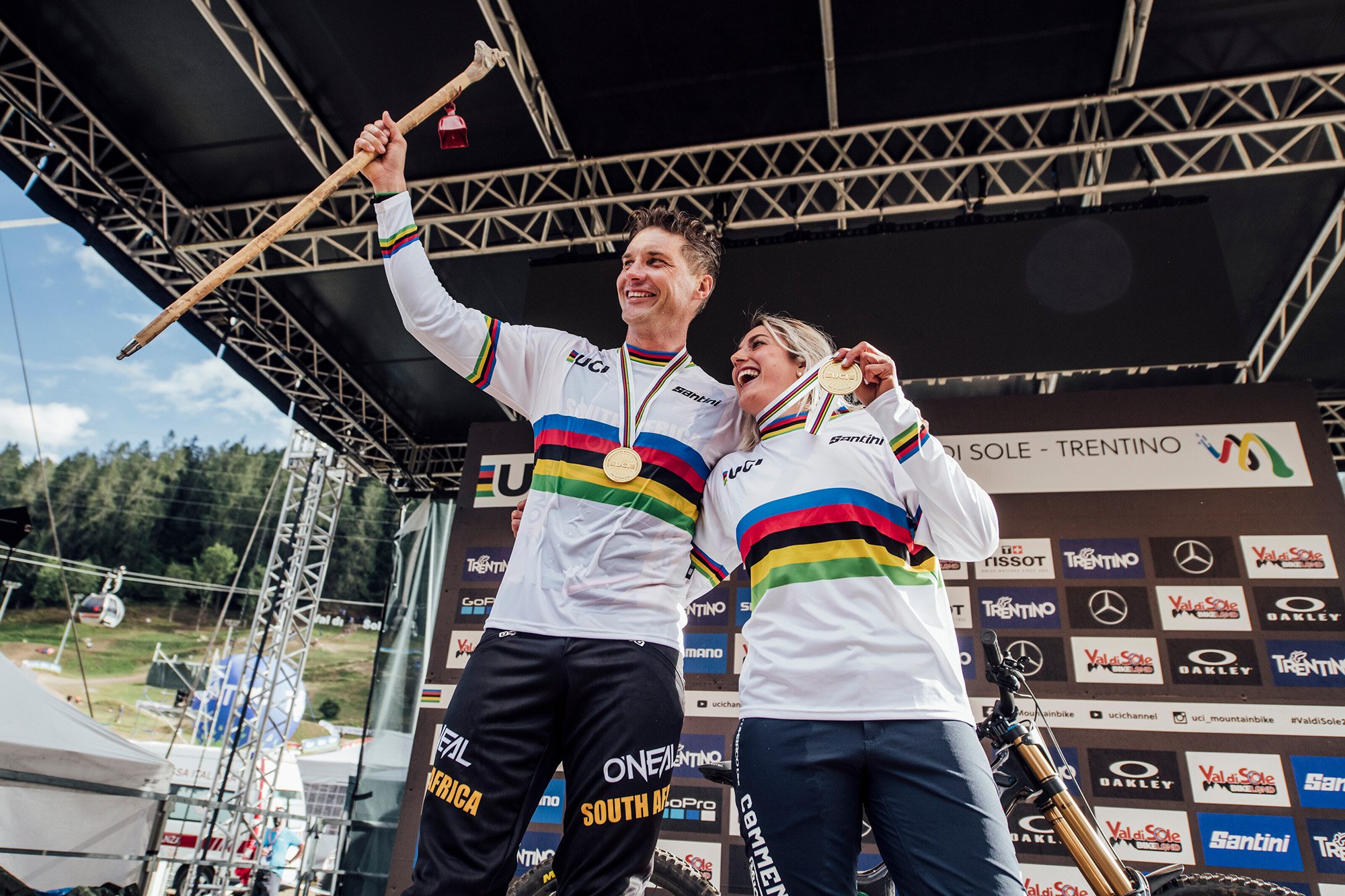 World Champs bring out the best. One run. All on the line for that winning time… This year, it was the GOAT, Greg Minnaar who took his chance to add another rainbow jersey to the three hanging on his wall alongside Myriam Nicole who also dominated on the Black Snake!

Heavy rain on Saturday eve had made the Black Snake course a slippery surprise during Sunday’s practice runs. However, with a few hours to dry, the World Championships would play out on an amazing track in prime conditions. 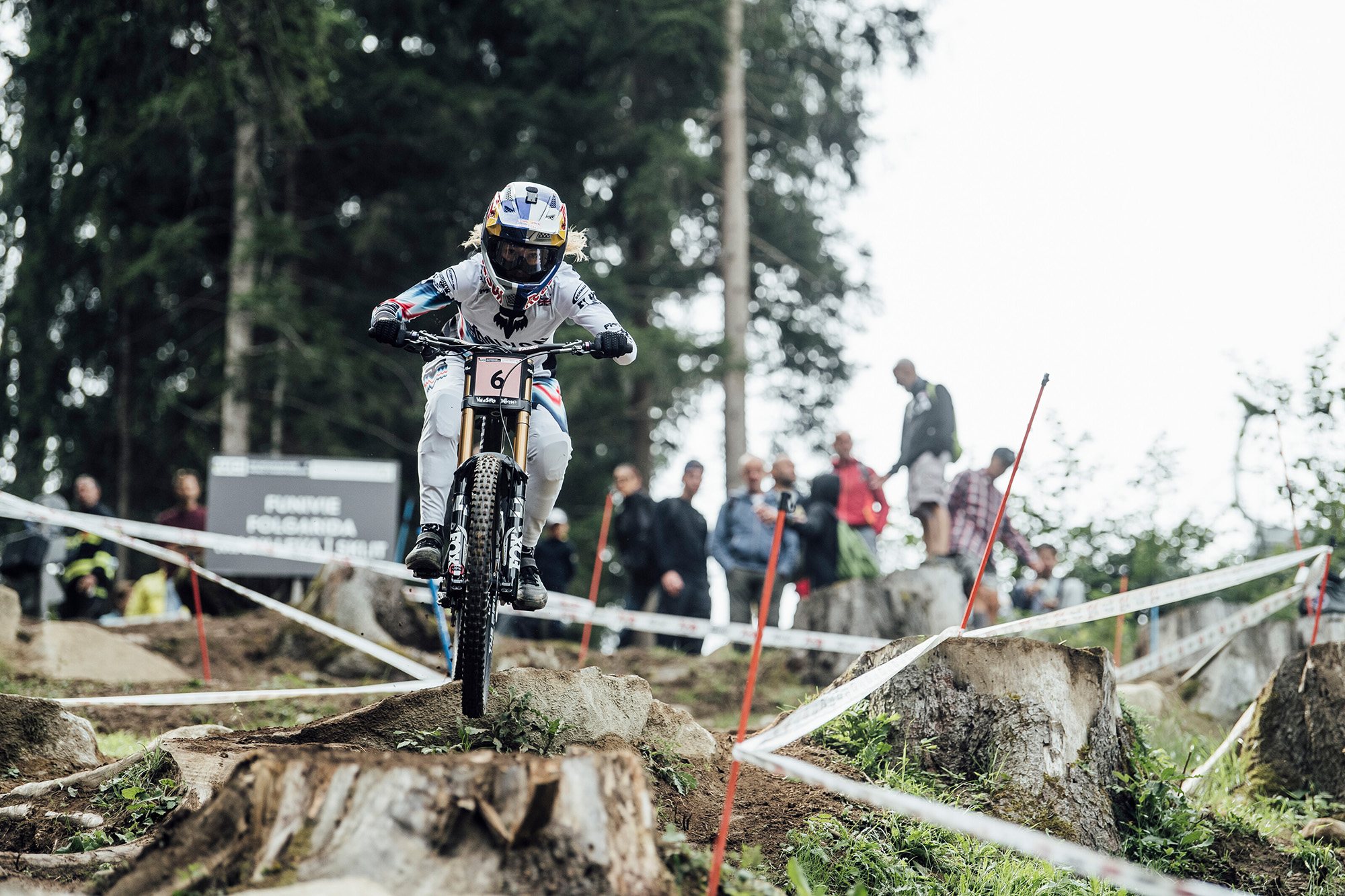 In the Elite Women’s race, the first of the big names to tackle the course was the fastest qualifier, Vali Holl. A rider with so much talent and yet so far, very little luck, the Austrian once again fell foul to race day demons with a crash ending her bid for glory. Tahnée Seagrave has been building speed and confidence all year and was certainly one to watch. However, when she decided to sit out qualification on Friday due to her neck injury, question marks were raised. And despite putting together a smooth run, she sensed others would go faster. Eleanora Farina, with huge home support from the Italian fans, was pushing hard and on pace but just missed out on the hot seat, finishing 0.188 down on Seagrave’s time.

Marine Cabirou, who took her inaugural World Cup win in Val di Sole in 2019, was 1.179 down at the first split but her trademark aggressive style saw her throw everything at the Black Snake and she crossed the line a staggering 5.454 seconds ahead of Seagrave. Defending World Champion Camille Balanche was the penultimate rider and she showed no ill effects from the nasty crash she suffered during her practice run on Sunday morning. Despite a bruised ankle, the Swiss rider was quick all the way down and absolutely sent the final jump to finish just 1.272 seconds off the pace in second place. 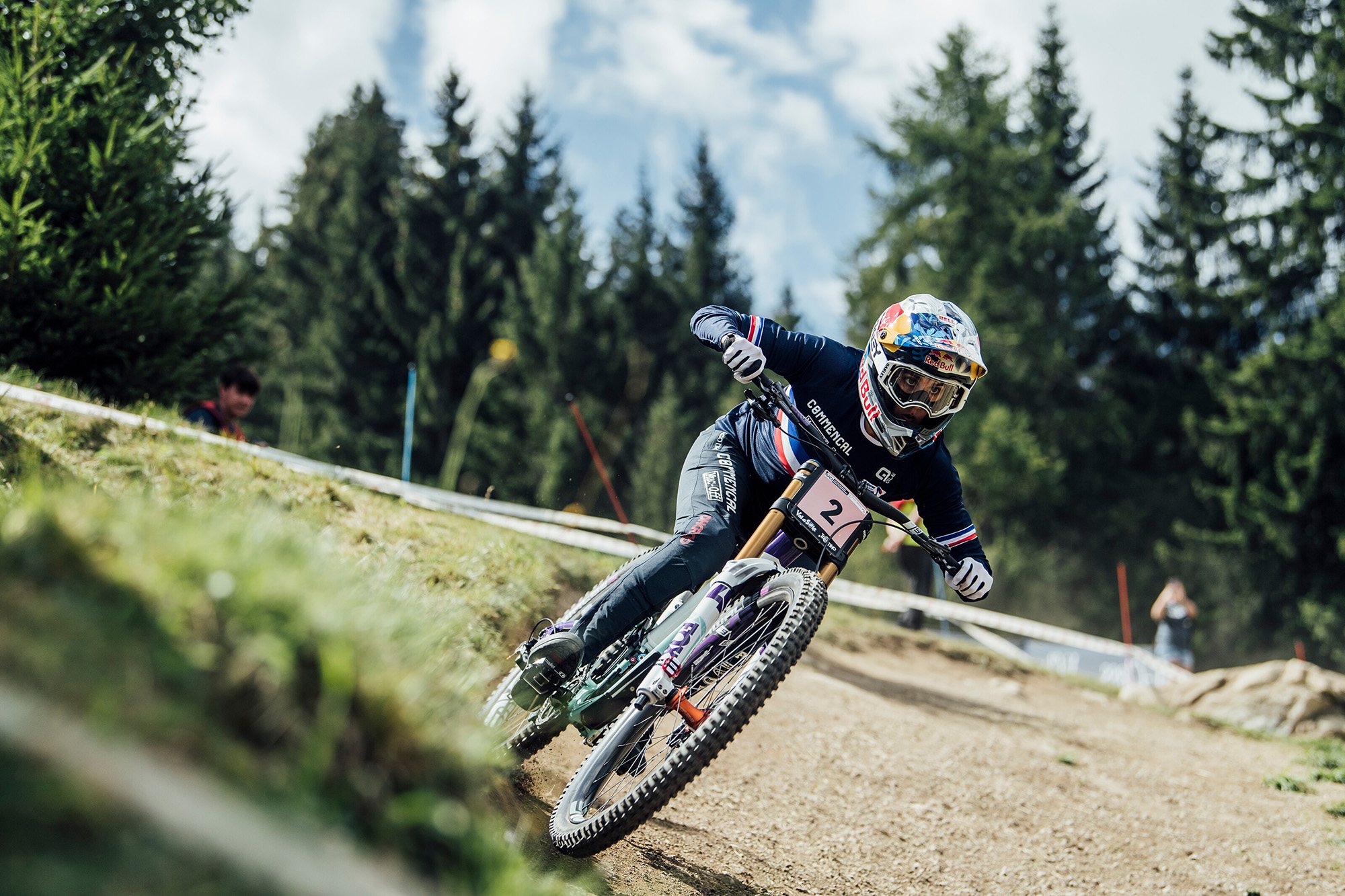 The final rider to tackle the course was Myriam Nicole, who showed exactly why she was viewed as a potential champion. Having won her first World Cup in Val di Sole in 2011, the French rider once again crushed the Black Snake with a smooth and fierce ride. Dropping into the final turn Nicole was absolutely flying as she crossed the line a huge 4.827 seconds ahead of Cabirou to claim the rainbow jersey.

In the men’s race, the drama showed no signs of subsiding, with early casualties including Amaury Pierron with a completely smashed rim and defending champion, Reece Wilson, blowing his front tire off the final jump. Angel Suarez and Dakotah Norton also crashed out while on epicly fast runs. Antoine Vidal was the man to occupy the hot seat for the longest time, starting his race almost two hours before the final run. Having qualified third, the enduro specialist backed up his performance on Friday to lay down the time to beat.

Finn Iles was the first to do so with a fast top section giving him enough buffer to hold onto a green split at the finish line. Danny Hart won the World Championships in Val di Sole in 2016 and was on another typically balls out run, fastest at every split and taking the lead. Remi Thirion and David Trummer – the silver and bronze medallists from Leogang last year – failed to go faster than the Redcar rocket. But with the French connection to come, it was only a mater or time till the hotseat was upset. Benoit Coulanges came down next and claimed the lead after nailing a powerful performance and nervously watched on as South Aus legend Troy Brosnan unloaded his signature smooth style and came within 0.214 seconds of his time… 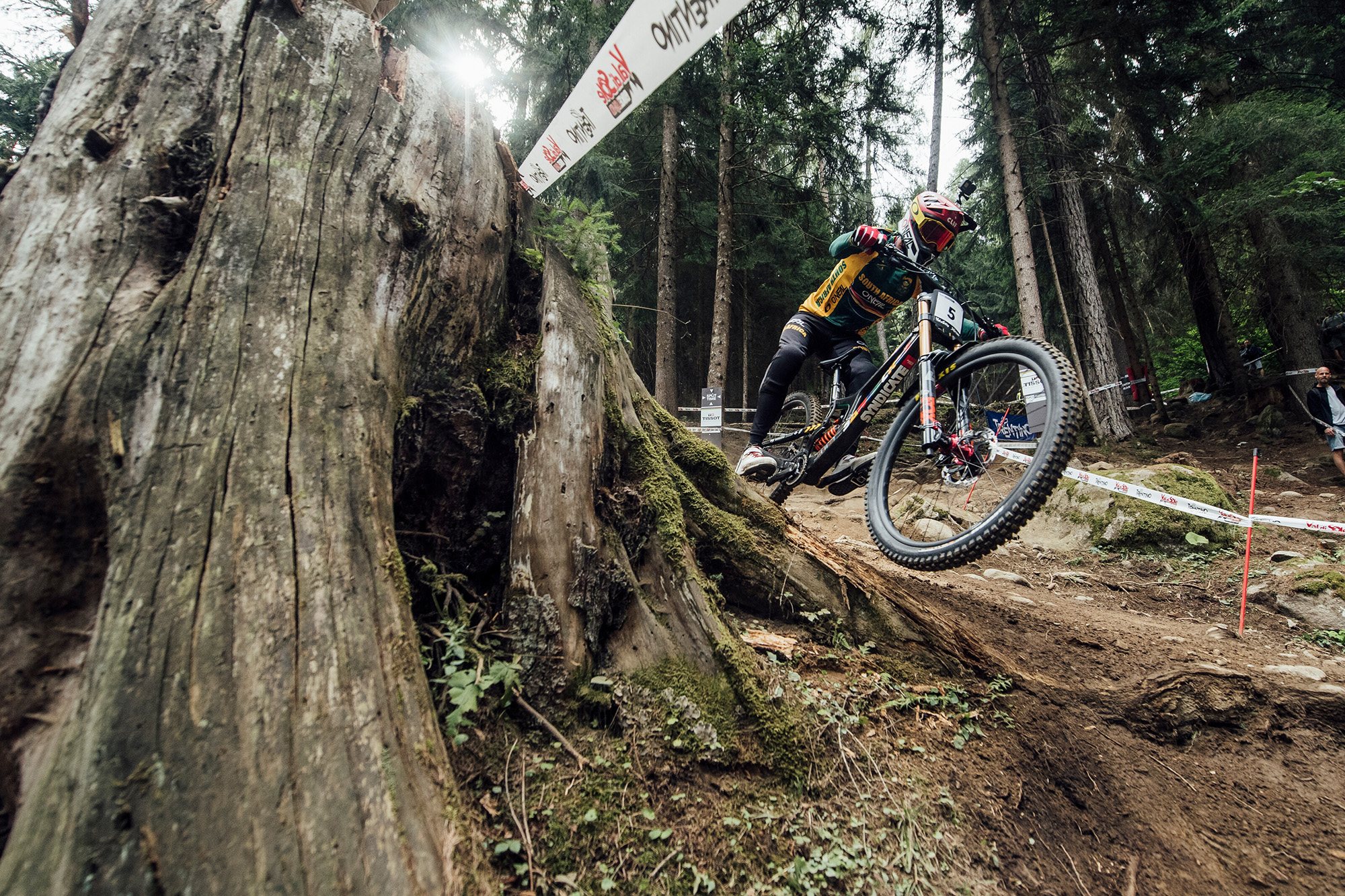 With the time looking able to be beaten, it was the one and only Greg Minnaar dropping in next. A rider with more experience at World Champs than anyone on the mountain, think two decades worth! The South African was up at split one but red at two and three. Minnaar began to claw back time further down the track, soaking up the rocks and roots as he flew through the final berms to snatch the lead and send the crowd wild with what was one of the legendary runs of our time!

Loïc Bruni failed to threaten the leaders, as did World Cup leader Thibaut Daprela when a crash ended his chances. Loris Vergier was then fastest through the first two splits but dropped back to fourth, leading to huge celebrations as the 39-year-old Minnaar realised he had become a four-time champion. A massive congrats to Troy for holding it open and into third place!

Being that we were geo-blocked with Red Bull coverage only available by VPN, we can’t show a replay or wining run, bummer…  If you suffered through the SBS commentary, send em an email and plead for a commentator that knows what a MTB is and has some interest in riding tires wider than 25c. I mean stoked they ran it, but…. That said, Fox and their Dialed series gives an epic insight into Greg’s run.