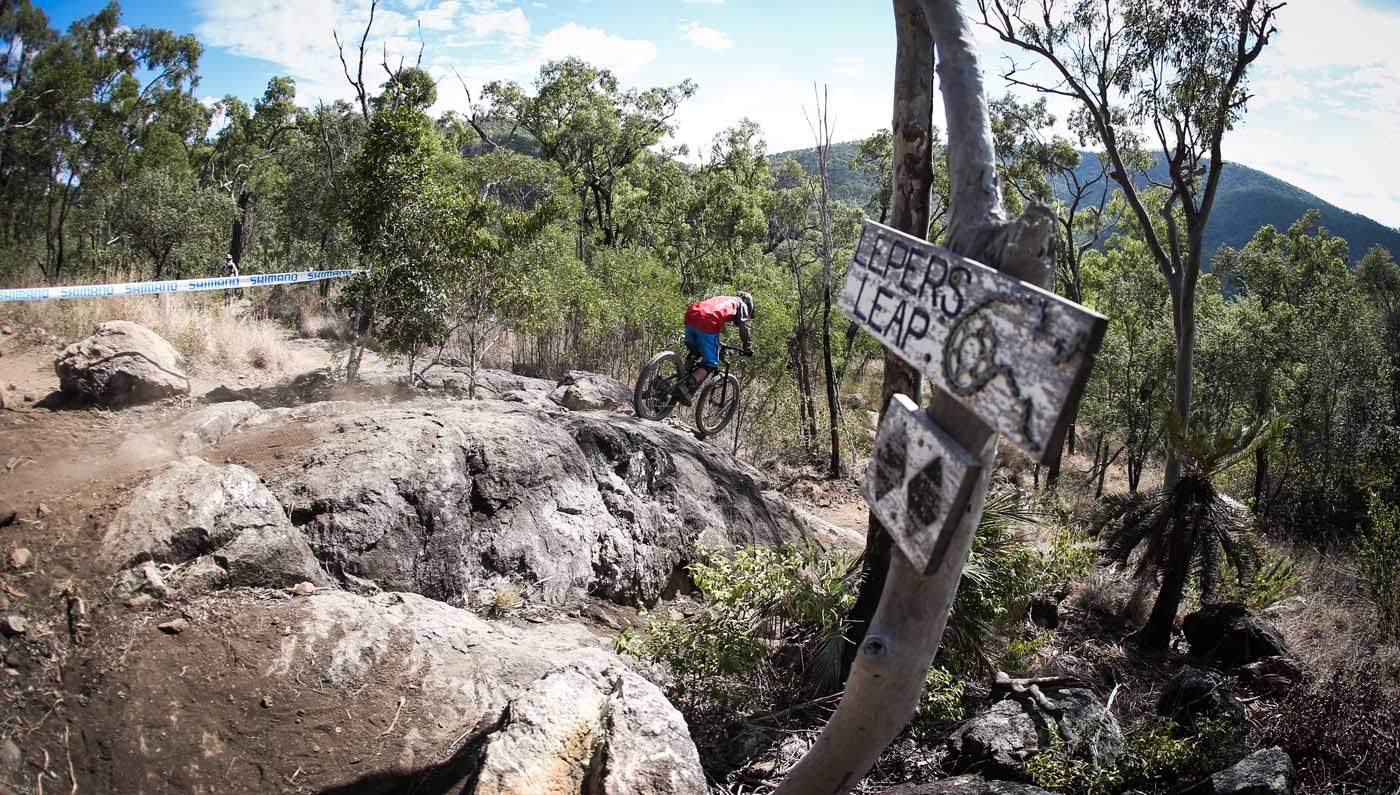 A rider about to drop into Lepers Leap

“If you want to race a National Event that is also an EWS qualifier, then you better be ready for some stages that make you uncomfortable!”  And so the scene was set for the Rumble in Rocky.

From dry, dusty practice on a warm-to-hot winters day came an overcast and humid race morning.  Rain perhaps? Riders set out from pit lane in small groups to warm up on the climb up Mt Archer.  The liaison resembled a catorgorized le Tour hilltop finish, but the cool breeze and mist streaming over the mountain top gave riders perfect conditions to cool down and prepare for stage 1 – The Dawg track.

Julia Boer sets off to dominate the Elite Womens race.

Some of the usual cockiness of race day was missing as riders took stock of the most physically demanding stage of the race.  Plenty of good lucks were shared as riders dropped in and hung on down sustained pitches characterised by deep ruts, loose rocks and knee deep trenches.  There was no relief for the entire stage.  No small pedal sections to give the arms a rest from braking.  No tight sections to bleed some speed.  And once you thought you’d mastered a section, the earth would give way to a pulse racing drop. For those that strayed from the course plenty of trees and rocks were there to lend a helping hand.  Perhaps it was a mark of respect for the stage that most riders, despite numerous OTBs and near misses, made it to the bottom unscathed.

“Pre-stage nerves gave way to relief and yew’s as riders crossed the line and shared war stories of falls and hard landings.”

At the pointy end of the men’s field Adrian Dawson set the benchmark at 3.40.3.  The top five men were all within 14 seconds of each other.  Julia Boer set the pace for the elite women at 6.17.4 while much of the field focused on the race ahead now that stage 1 was done and dusted.

Cooper Lowe at the end of stage 2.

Stage 2 started a stones throw from the end of Stage 1 and promised 1700m of tight turns, more rock and plenty of speed despite the fresh cut trail.  David Ludenia threw down a 3.24.2 while all top 10 men were within 10 seconds of each other.  Angela Williams nabbed first on the stage less than 2 seconds ahead of Julia Boer.

The focus for racers now turned to the 4 stages radiating out of the Turkeys Nest hub.  The easy 2.4km liaison climb started to feel like ground hog day as the sun came out and the temperature climbed.  Stages 3 to 6 were categorised by rocks dust and more dust.  Mechanicals and fatigue were the real killers here and racers were rewarded for hard work and commitment.

The bottom of stage 3 – Cactus, showcased some hard and fast flow trail that let riders just rip in and enjoy some airtime.  Stage 5 was a war of attrition in powder like conditions and course marshal’s tallied flat tyres with worn out broken riders.  Stage 4 was resurrected in 2013 from trails first built in the mid 90s.  It was as much about staying upright as it was pedalling hard in the right places.  Stage 6 dropped riders straight off the hill and promised those that stayed off the brakes a fast run to the finish and a cold beverage at the event village to celebrate a hard day’s work.

David Ludenia dominated the elite men’s field, winning stages 2 – 6, but a 19 second deficit from stage 1 proved impossible to overcome.  Ryan Leutton rode hard and consistently to finish second on stages 2 to 6 and keep his completion at bay for the win.  Jon Odams finished top 5 on every stage and took second place.  David Ludenia rode hard for third less than 1 second behind Jon.

Julia Boer finished consistently top 4 to dominate the elite women’s field by 50 seconds.  Angela Williams and local hope Jodi Newton chased hard across all stages taking some stage wins, but again the difference was stage 1 where Julia put 30 seconds into her competition to cement an early lead.

Every rider that finished today was no doubt a little battered and tired, but that is what makes our sport so addictive.  Getting back up after getting knocked down and giving it some more!

So in the final wash up the Rumble in Rocky was the uncovering of a diamond in the rough. No doubt we will see more of this venue in the future.  Now enjoy that cold drink and get some ice on those bruises.