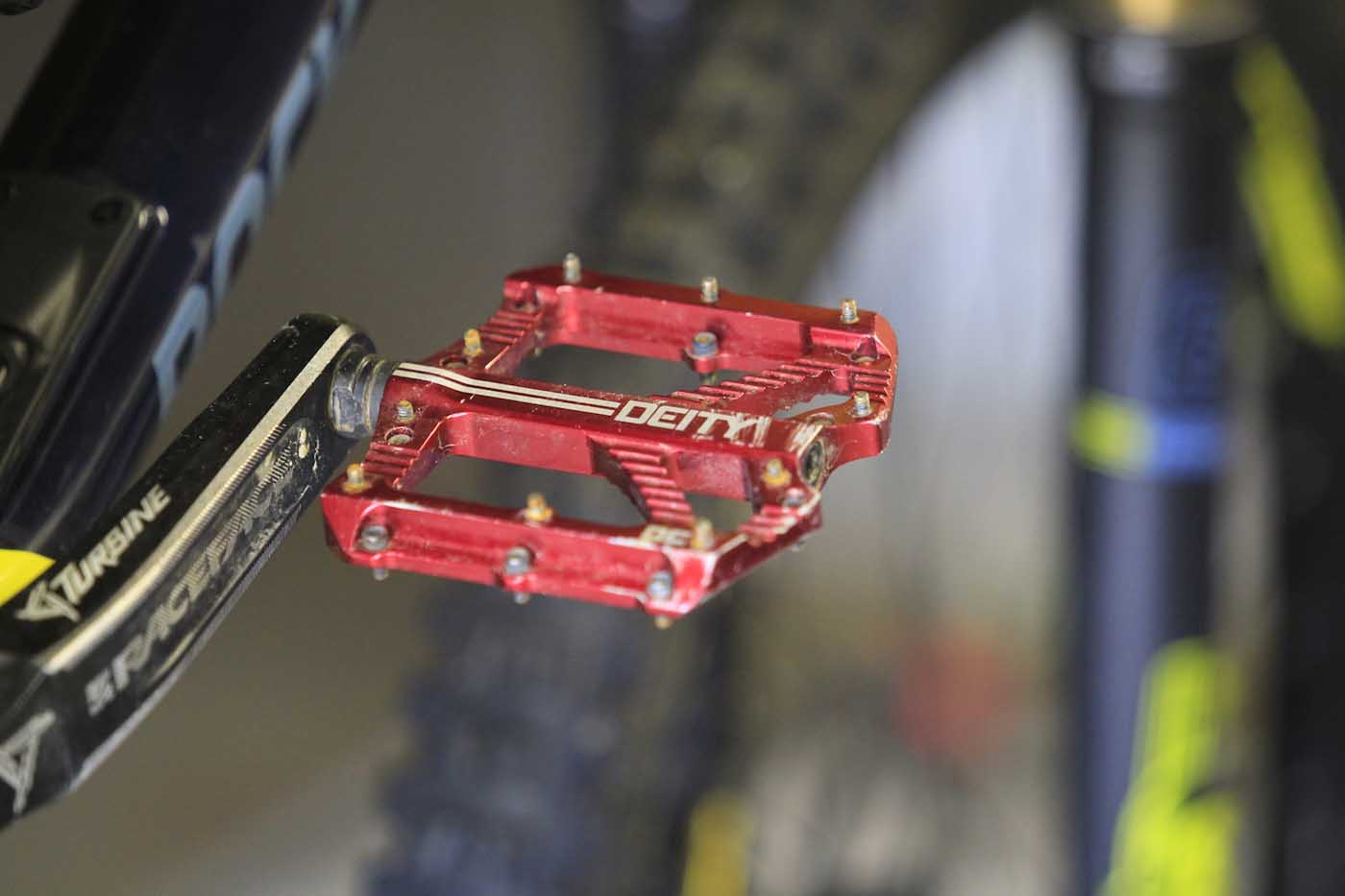 We all know the phrase ‘flat pedals win medals’. The timeless style of the likes of Sam Hill and Chris Kovarik foot out through corners is what made MTB the cool as all hell thing we love today. So on that, it’s about time to drop a review on one of the newest entries into the flat game, Deity’s Bladerunner pedal.

The premise was simple. Deity wanted to bring a bigger, wider, thinner flat pedal to the table that upped the ante on all their previous offerings. The result? Ten massive pins, a tough as nails chromo axle, a bunch of sealed bearings and DU bushings on each side, all packed into a slim 11mm body (14mm in the middle thanks to those bearings) of 6061 extruded aluminium, machined to the nines leaving only 370 grams of shoe gripping metal goodness. Forget old slim line pedals with nothing but bushings that you threw out 9 months later, as the Bladerunners can be adjusted with an 8mm allen key and your 15mm pedal wrench, on the bike even. And like all good flat pedals, the Bladerunners are actually flat, not a concave cut that sucks soft sole shoes into, never to escape. Deity taking the road less travelled, running shorter pins inboard and longer ones outboard. Smart cats indeed.

So, with BB’s seemingly getting lower and lower each year (maybe I should up my rear shock pressure?) the slim line profile is a bonus, however when they do catch rock once it gets tech on the trail when going up, those big arse pins work better than any soft compound rubber tire in adding a little traction on said rock (and the sole). They’ve also made a mess of my shins the one time I’ve been foot out and then tank slapped into the next feature, although that could be all my fault.

The platform size is good (100mm x 103mm), not too big to be catching edges on a lot to the trails I ride, but I know it’s there under my foot however gnarly it gets. And I know, however much I smash those pins into rocks, they thread in from the backside, unlike some offerings out there today that need to be thrown away or recycled onto your beer bike after a season of riding. I’m amped on the level of grip from the pins, but really appreciate the flat feel and ability to move my foot as per the trail dictates, especially getting back on the gas after a loose, drifting, foot out corner. In the past I have been known to run shorter pins or cut/filed down pins to allow the newer generation of super sticky soles to move once on the pedal, but I’m pretty stoked on the feel of the Bladerunners in stock form.

We bent a few pins, fixed by bending them straight again with pliers, then replacing. Brand new feel once again…

“I’m amped on the level of grip from the pins, but really appreciate the flat feel and ability to move my foot as per the trail dictates, especially getting back on the gas after a loose, drifting, foot out corner.”

So, a few months down the trail, whats the verdict? Well, they still spin. They don’t rattle. They may be a little beat up, faded a little and not as shiny. However they still take chunks out of my shin and still get me over some big arse rocks and down some super gnar trails in style. All up Bladerunners are a solid option for all your ‘I’m not riding clips coz Connor Fearon and Sam Hill f’n rule’ trail needs. Maybe not the lightest, or slimmest or most intricately machined, but definitely the right mix all all of the above from a company that loves to ride as much as we do. Much like the movie, I dare say these will be a pedal that will stand the test of time, at least on one of my rides for a long time to come.