24.5 trail notes about Giant’s latest e-MTB. Is this the first ever e-Bike version of ‘one bike to do it all?’ Let’s take a closer look…

The bike is exclusively a 29’er and this is in fact the first time that Giant have spec’d the larger wheel size on a performance off-road e-Bike. As you might expect, the 29” wheels deliver a fantastic ride quality as it smooths out the trail and holds its momentum perfectly.

The design brief for this new bike was to deliver a bike with more ‘range’ than any Giant e-MTB that had come before, meaning more trail hours between charges, and that is exactly what they have delivered. This bike comes stock with a mega 625Wh battery neatly integrated into the bike’s down tube. Oh yeah, and the battery charges to 80% capacity in just 2 hours!

Over the years Giant have occasionally included special models in their line-up which feature burlier geometry and increased travel in order to make them party harder out on all the fun sections of trail (the rough stuff!).

These bike’s carry an ‘X’ insignia in their name and as you might have already guessed the subject of this entire article falls into that category. And this is in fact the first ‘X’ series e-Bike range.

The bike’s plush ride is delivered via 150mm of suspension travel up front and 140mm in the rear which of course utilises Giant’s Maestro suspension system. Combined with those 29’er wheels and chunky Maxxis rubber, the Trance X E+ feels really well balanced and it excels at carrying its momentum especially over the rougher stuff.

Whilst on the subject of frame geometry the Trance X E+ actually features adjustable geo. Yet another debut for a Giant e-MTB! A ‘flip chip’ which enables 2 different configurations has been neatly incorporated into the bike’s carbon rocker link. The ‘high’ and ‘low’ settings drop and raise the bike’s bottom bracket height by 10mm and also slacken/steepen both the headtube and seat tube angles by nearly a full degree which certainly makes a noticeable difference to the way the bike reacts and handles whilst you’re riding.

Switching between the ‘flip chip’ settings are super easy/user friendly. You literally just undo a pair of bolts, spin the ‘chip’ upside down and re-fasten the bolts. Job done and you’re ready to roll.

To ensure the bike’s linkage stays buttery smooth for years to come Giant have fitted large double-sealed bearings in every pivot. 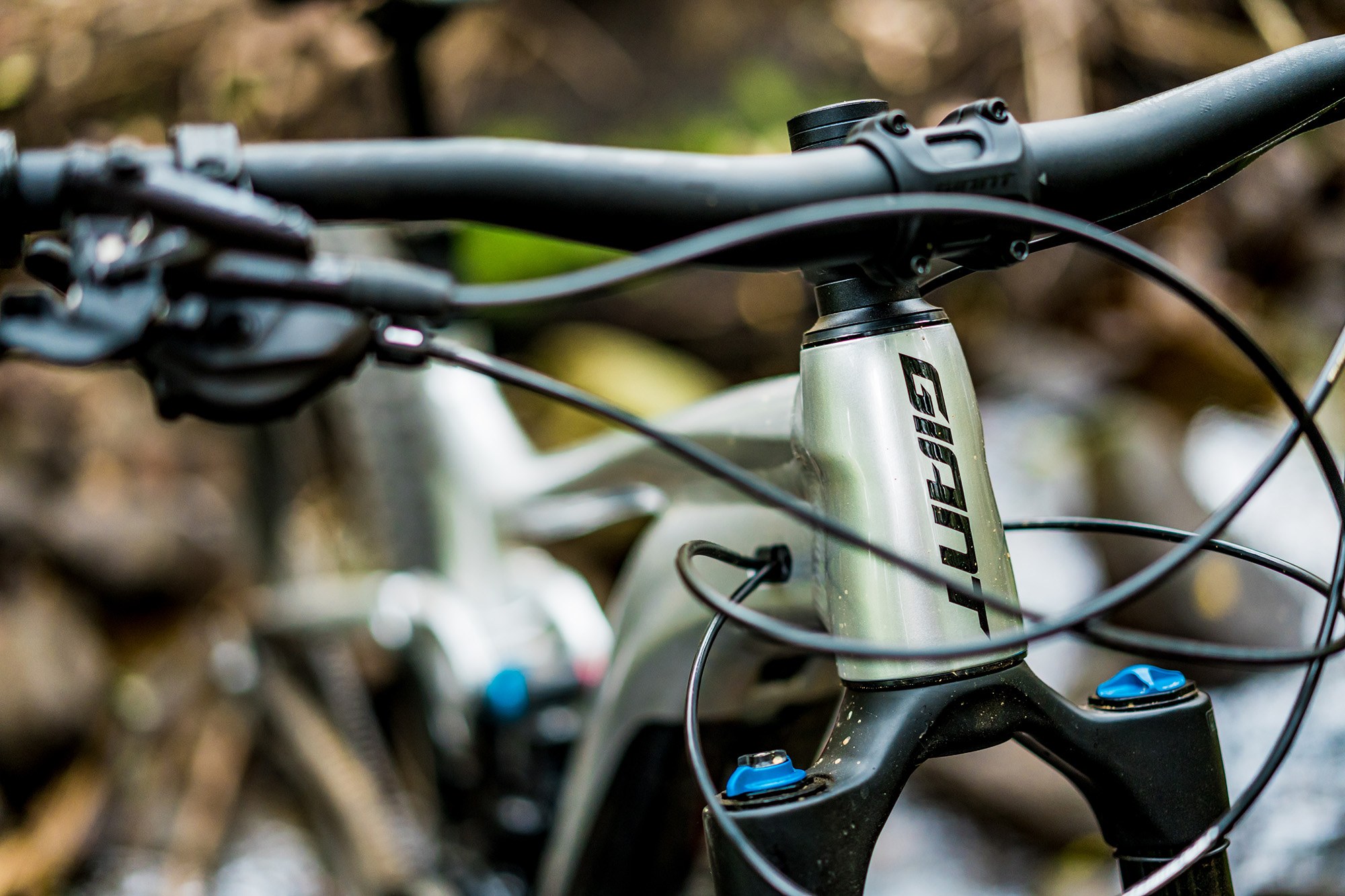 Yes, unfortunately we will have to wait a little longer at least to see a carbon e-MTB from Giant… However not to worry, the Trance X E+ utilizes a rather lovely looking ALUXX SL alloy frame which has been massaged in all the right ways in order to remove material from where it’s not needed in order to reduce the frame’s weight but also to increase the bike’s overall stiffness.

The Trance X E+ features the exact same Yamaha ‘SyncDrive Pro’ motor which we saw introduced on the current generation Reign E+, which is great news, because we already know and love its proven performance and reliability.

Horsepower! With 80Nm of torque and up to 360 percent of support it certainly packs a massive punch and, in my opinion, this is one of the smoothest and quietest motors on the market.

The SyncDrive Pro boasts 5 power settings that are controlled via the Ride Control One lever which is located on the left side of the handlebars. It also features LED indicator lights and ergonomically designed rubber control buttons for scrolling between the various system settings.

A little birdy has whispered in our ear that Giant are about to release a new version of their Ride eControl App which is going to allow a TON of improved rider customisation and data tracking features. Word on the street is that the new App will be going live before the end of the year, it will be a free upgrade and it will be compatible with all current model Giant e-MTBs. (This piece of news only scores .5 of a point because technically what we’re talking about doesn’t exist yet.) 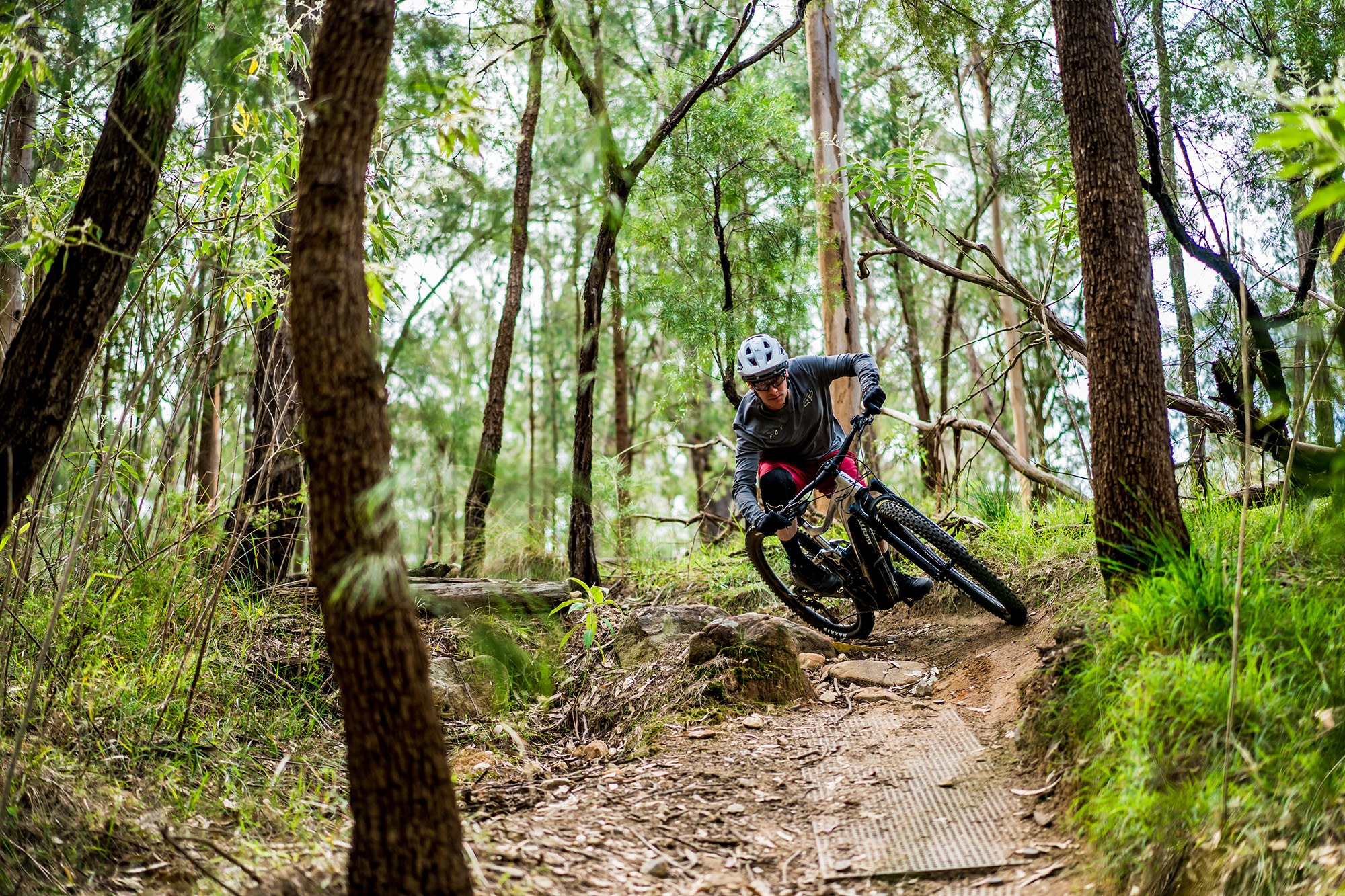 Now, let’s talk about the bike’s weight, or lack of. For an alloy frame fitted with such a big battery and a rather chunky set of 29” wheels you could be forgiven for assuming that the Trance X E+ would be super heavy, but, it really isn’t. It feels noticeably lighter than the Reign E+ that we tested recently. Giant have done a great job balancing out this bike’s weight and it really shows when you can throw it around out on the trails with ease.

Want even mooore battery range? Giant’s aftermarket Energypak Plus battery can be mounted to the bike’s water bottle mount on the downtube which then gives you an additional 240Wh, boosting the maximum ‘range’ of the bike to an eyewatering 865Wh. Meaning that you could just about pedal to the moon and back on a single charge!

The new rig also features a new rubberised chainstay protector which has been specifically developed to reduce chain noise. It’s funny, you don’t realize how noisy chain-slap can be until it’s gone, eh!

Are these Maxxis tyres made from glue or rubber? Their grip is unbelievable, especially when riding in wet conditions.

Oh and speaking of tyres, this bike boasts a heap of clearance so you can run up to 2.6” rubber and still have allowances for mud and trail crap to clear out.

Another smart spec choice which is worth mentioning is that all 3 models arrive with 200mm brake rotors front and rear.

Often removing the battery from an e-Bike can be a bit of a nightmare but not with this bike. All you need to do is insert a T-hex into a small opening on the left hand side of the downtube, unwind it a few turns, then release the easy to reach ‘finger clip’ on the underside of the battery and out she comes. Installing the battery is just as easy, simply reverse the order. This is great for storing the battery and also for accessing the inside of the bike’s downtime where all of the main cable management takes place.

Following on from the above point, whilst we wouldn’t recommend a budding home mechanic try to get too ambitious with working on or near the electrical systems of their e-Bike, it is a good idea to remove the bike’s battery from time to time to give it a clean and inspect it for signs of damage or wear. 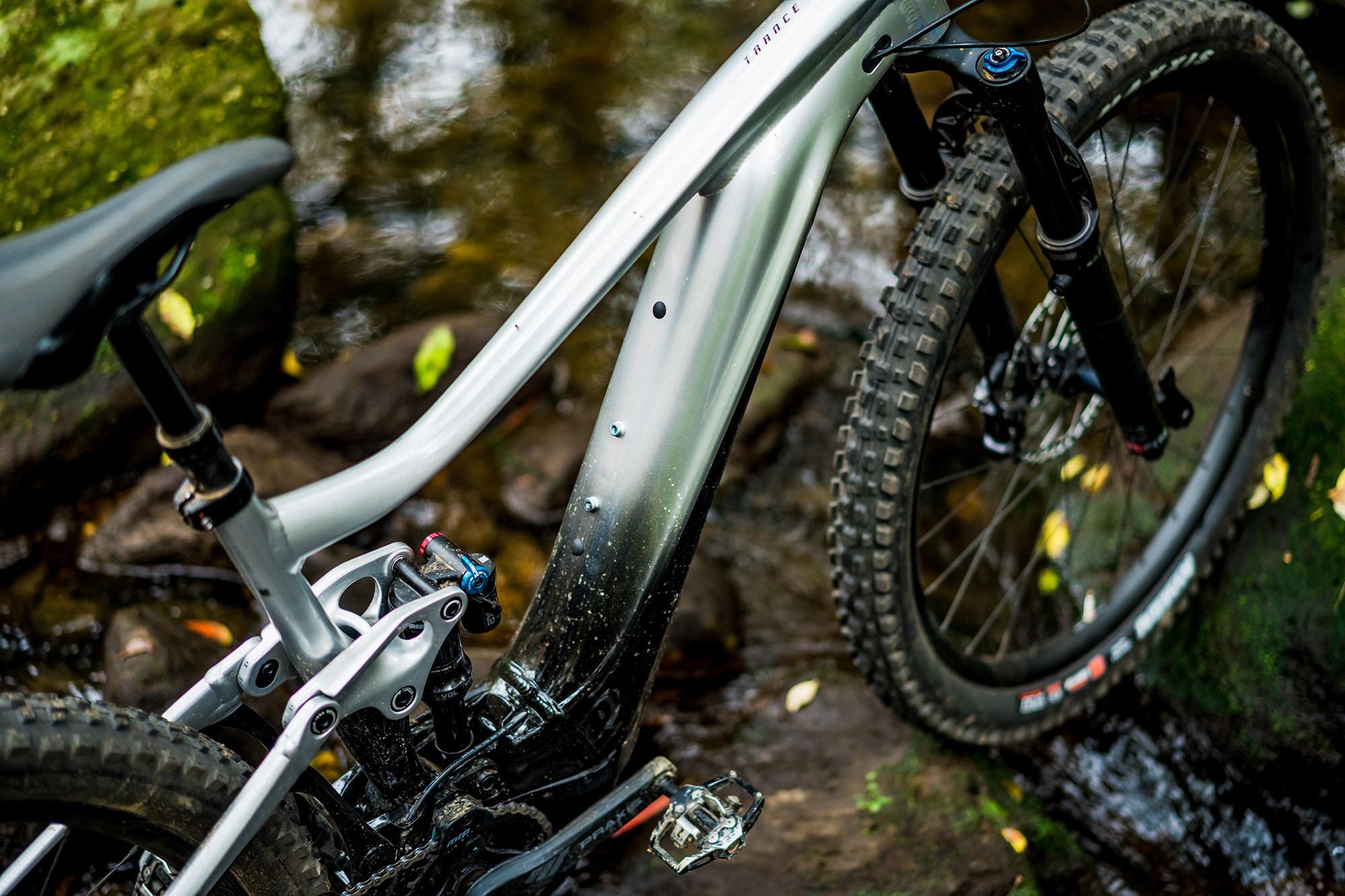 What do you think of the silver to black paint fade? It certainly looks cool in the flesh. All 3 Trance X E+ models feature the fade effect.

Pricing! The Trance X E+ 1 Pro 29 is offered in 3 different models with pricing starting at $7499 for the entry model, and heading right up to $9499 for the fancy top of the line version (which was the version we tested). Dollar for dollar that makes this bike particularly good value for money when stacked up against the competition.

The Trance E+ descends the trails with a note of sensibility and confidence, which is far easier to live with for a bike you’ll want to ride every day. And personality wise I actually like the fact that the Trance E+ isn’t just a raging bull of angry muscle ready to rip your head off as soon as you point it down a steep trail which is exactly what its big brother Reign E+ lives to do!

Ultimate all-rounder? Having spent a full month testing the new bike, racking up over 50 hours out on the trails, we really are impressed with the new package and particularly love the way that it handles. In our opinion the Trance X E+ 1 Pro 29 proves itself to be the ‘e-Bike’ version of that old saying ‘one bike to do it all’. If indeed that was the original design brief with this bike then Giant have certainly come out swinging, and we reckon they’ve knocked it out of the park.