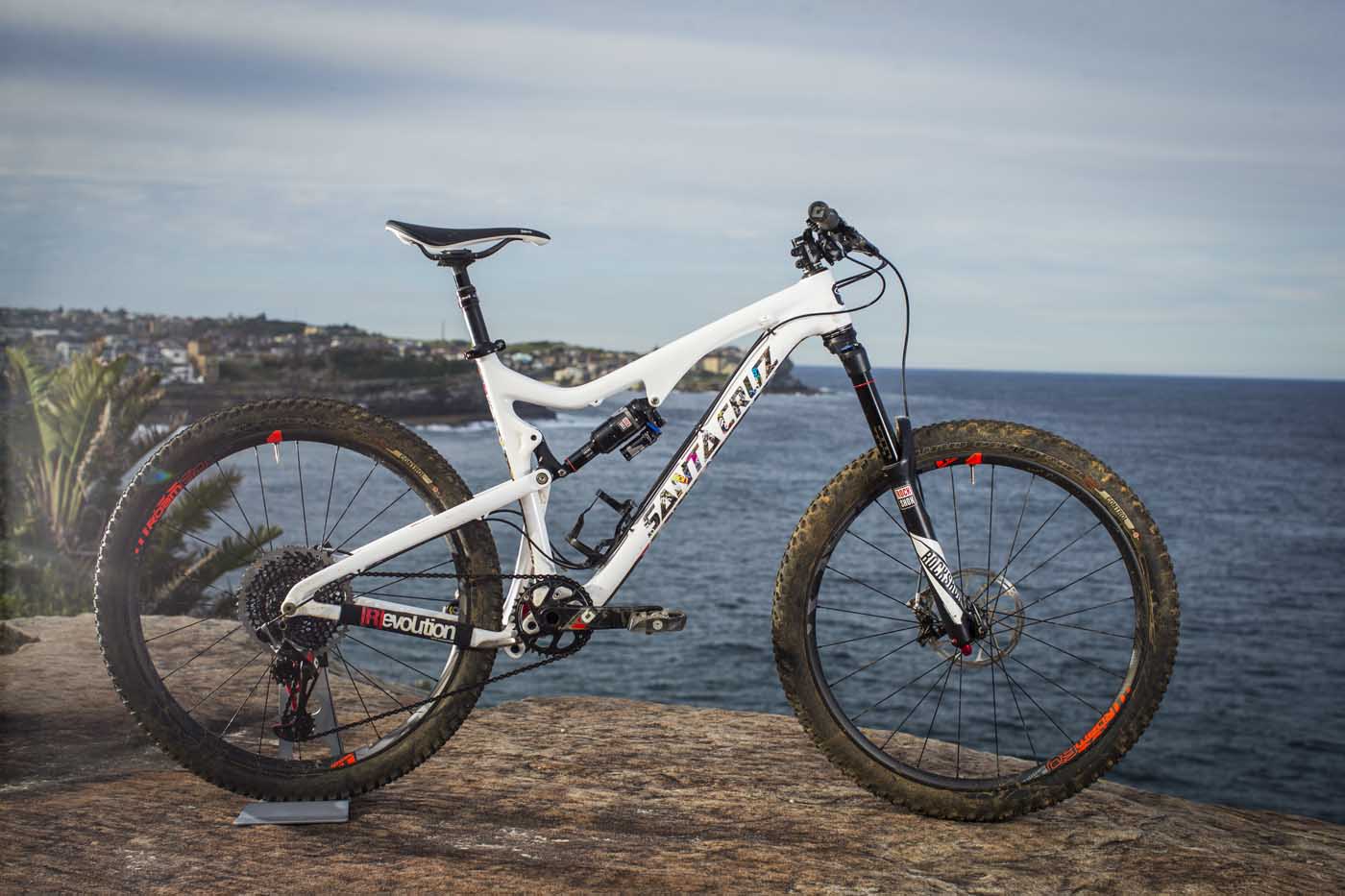 SRAM’s exciting new 12 speed Eagle groupset is offered in two specs; the insanely sexy golden XX1 groupset specifically for XC and light trail riding (bikes with 120mm or less travel); and the stealth black Eagle XO1 group which caters to the all-mountain Enduro market. Of course, we’ve opted for the XO1 version and it has been bolted to [R]evolution’s trusty Santa Cruz Bronson for the past couple of weeks. We are going to hold off on the groupsets review until next issue as we’re wanting to rack up several hundred kilometres worth of trail notes to form a fully rounded opinion of how the new groupset performs. That said, here is a brief account of how we’ve been getting on with Eagle since installing it on the bike and ripping a few hot laps down at the local. 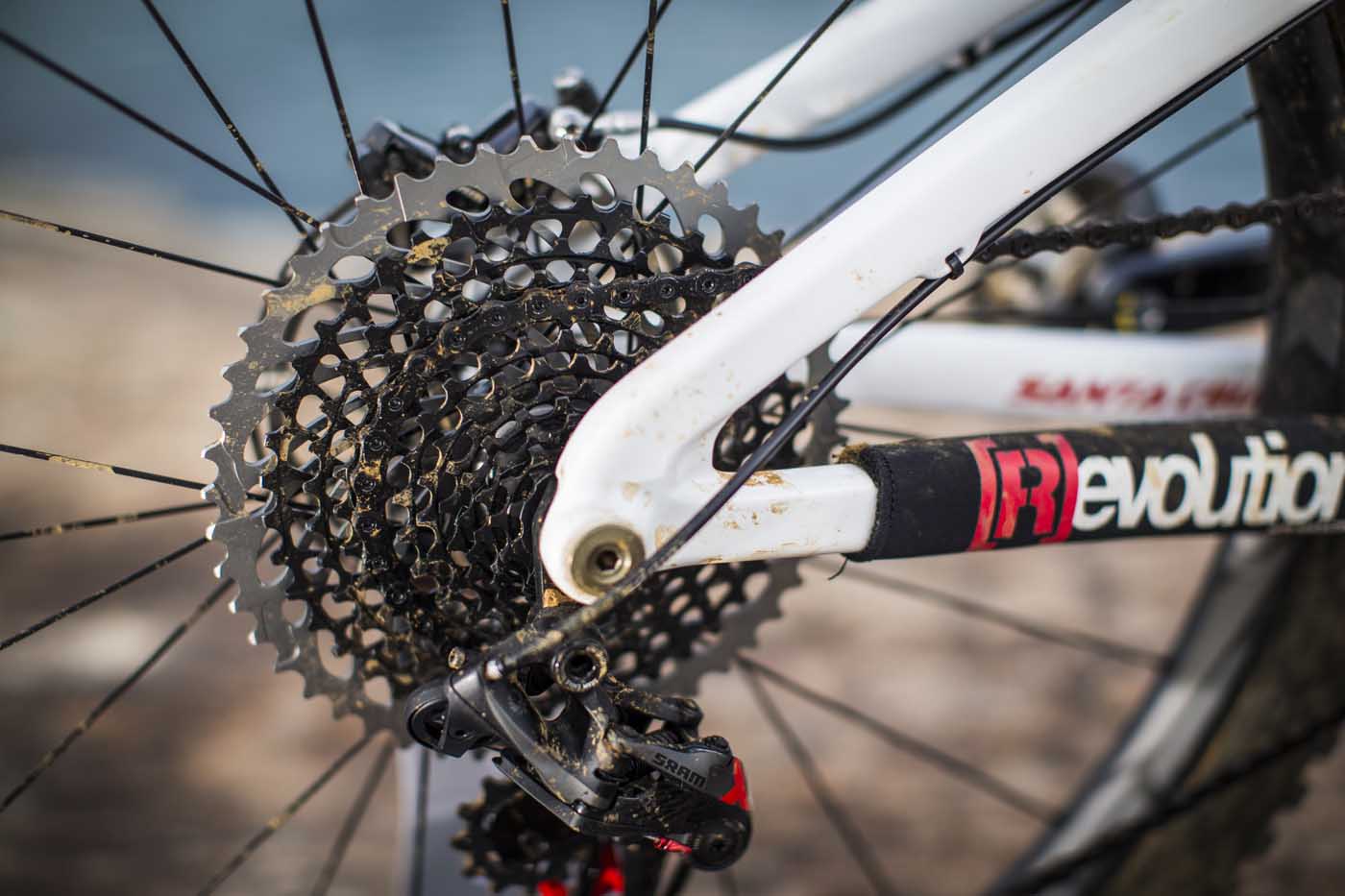 The first thing about SRAM Eagle that grabs your attention is that huge cassette, it’s a monster, and certainly everyone will be talking about Eagle’s 50 tooth cassette sprocket giving a huge 500% range. It carries with it the X-DOME architecture, which, independent tests have concluded, yields the strongest cassettes on the market. New shifting characteristics improve both inboard and outboard shifting, as well as chain retention. Speaking of which, the 12 speed Eagle chain is entirely new, with rounded inner plates and totally flush pins that dramatically quieten the drivetrain. The Eagle chain also debuts SRAM’s new quicklink design which they’re calling ‘Power Lock’. It is claimed to boast a firmer engagement and reduce chain breakages during multiple shifts to smaller rings while sprinting. 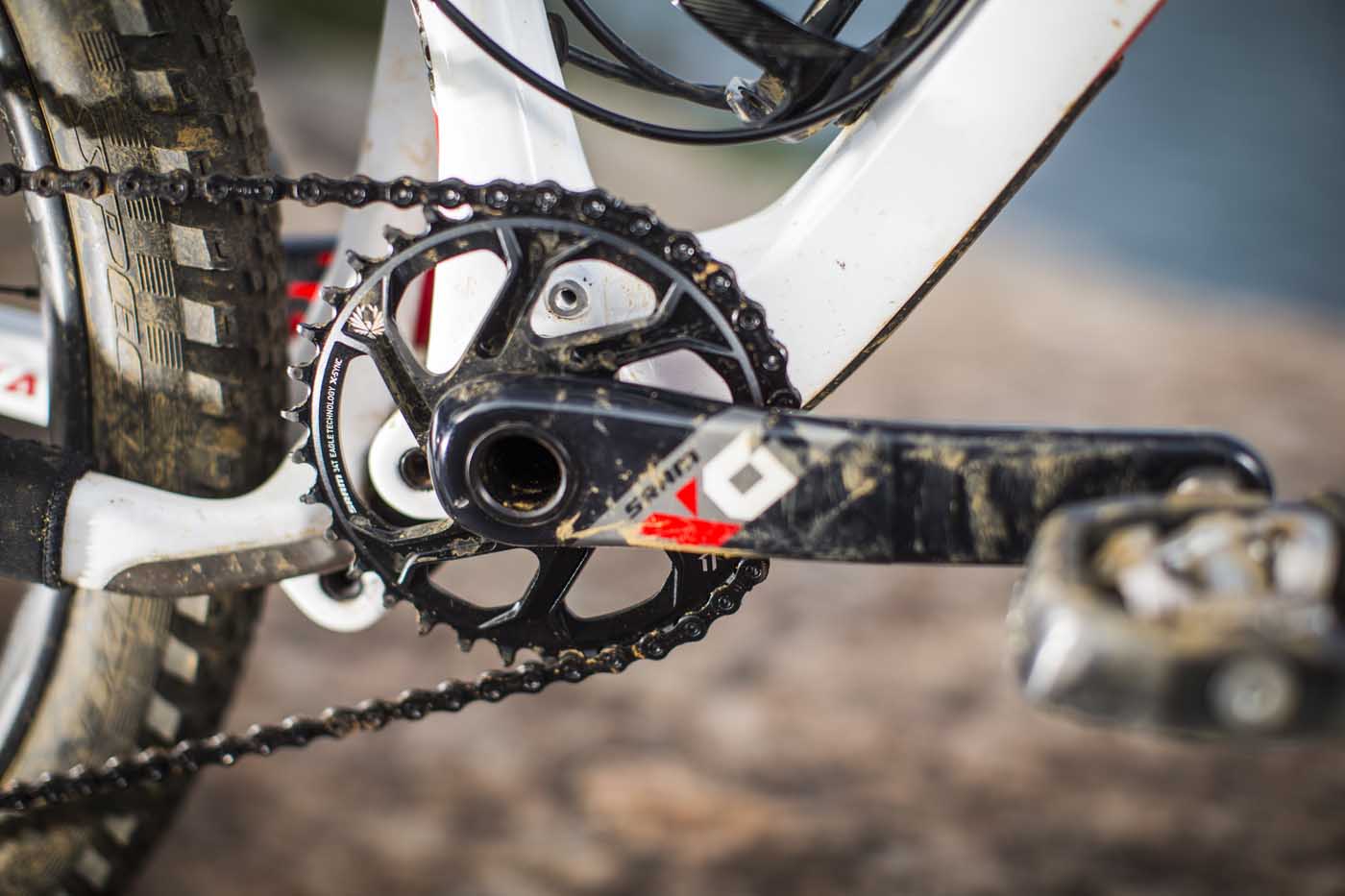 The tooth design of the Eagle’s front chainring is another noticeable new addition. In efforts to boost durability, SRAM have developed new aggressive X-SYNC 2 teeth. When the existing generation SRAM 1x chainrings wear they are prone to ‘holding on’ to the chain at the bottom causing a rattling noise. The new X-SYNC-2 distributes load on more teeth to reduce wear and the trailing edge has been removed to quieten release at the bottom of the stroke. The new tooth shape and profile certainly has a ‘hook like’ appearance. It is available in 30-38 tooth sizes. We’re currently rocking a 34 tooth ring which gives a great gear range when coupled with the Bronson’s 27.5” wheels. 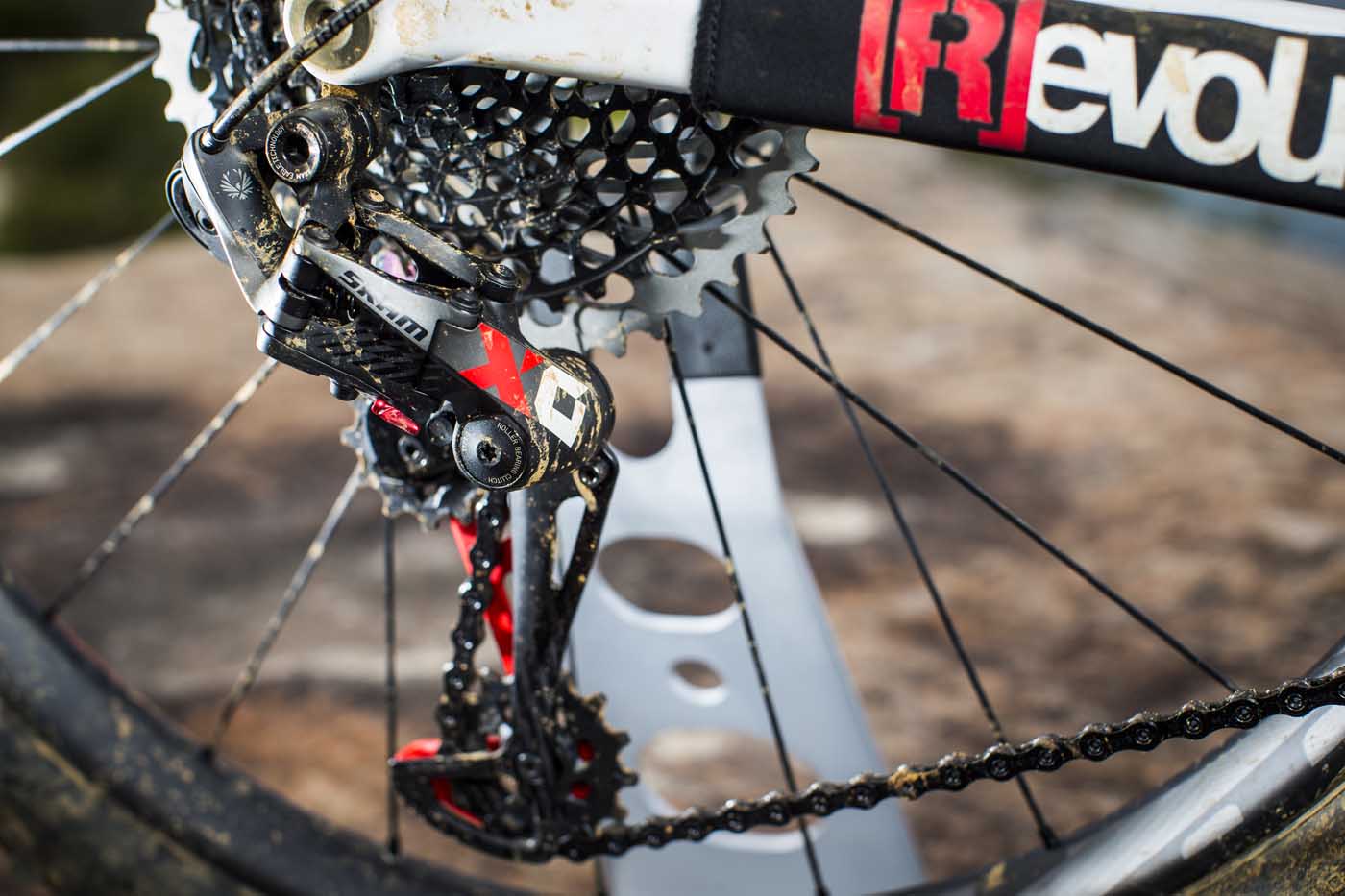 Next up you’ll notice that the Eagle’s rear derailleur has been supersized! This new, larger unit, is necessary in order to answer the Eagle drivetrain’s need for greater capacity to shift up onto that 50tooth top ring. We’re talking about the latest evolution of SRAM’s proven, 1x-specific X-HORIZON design. It features larger, 14-tooth X-SYNC lower jockey wheels which adds to Eagle’s overall smooth-pedalling feel. Hidden inside the rear mech is an all-new ‘Type-3’ roller bearing clutch which features a smoother torque curve for a quieter, more consistent operation and feel. 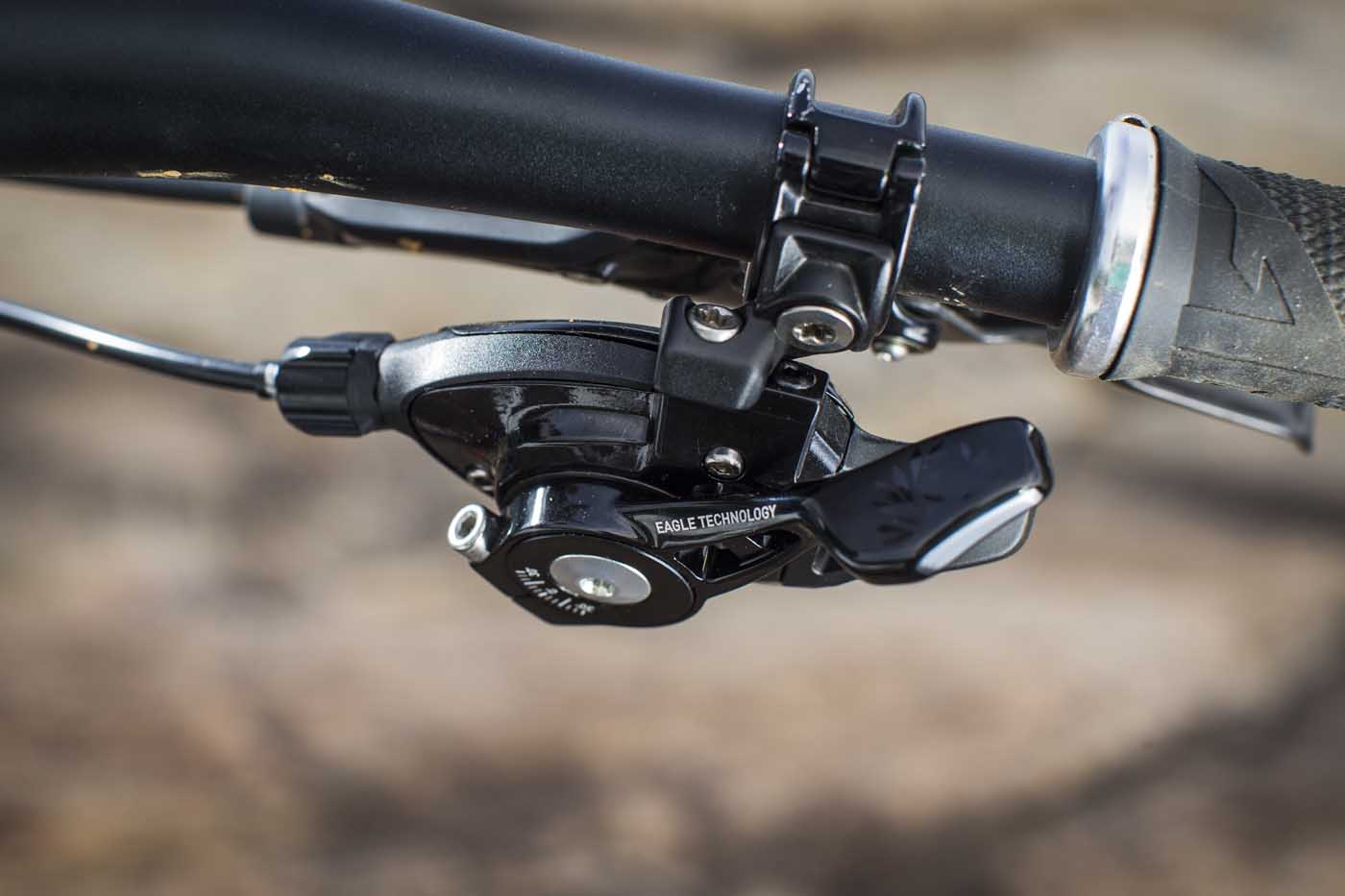 Both Eagle groupsets feature a completely re-engineered crankset design. A special hollow internal architecture, combined with their proprietary carbon tuned lay-up, has allowed SRAM to build a lightweight, yet ultra stiff and energy efficient crankset. The Eagle XO1 cranks are a little heavier than the XX1, however that extra baggage is due to the cranks being built tough to handle the serious levels of abuse that the world’s fastest Enduro racers dish out as they smash aggressive lines through rock gardens, etc.

Whilst we mightn’t match Sam Hill, Jared Grave’s and Troy Brosnan’s levels of skill and speed, we can at least now claim to be using the exact same drive train that each of them use. We can’t wait to get out and spend more time testing it. Check back in next issue to see how we’ve been getting on.