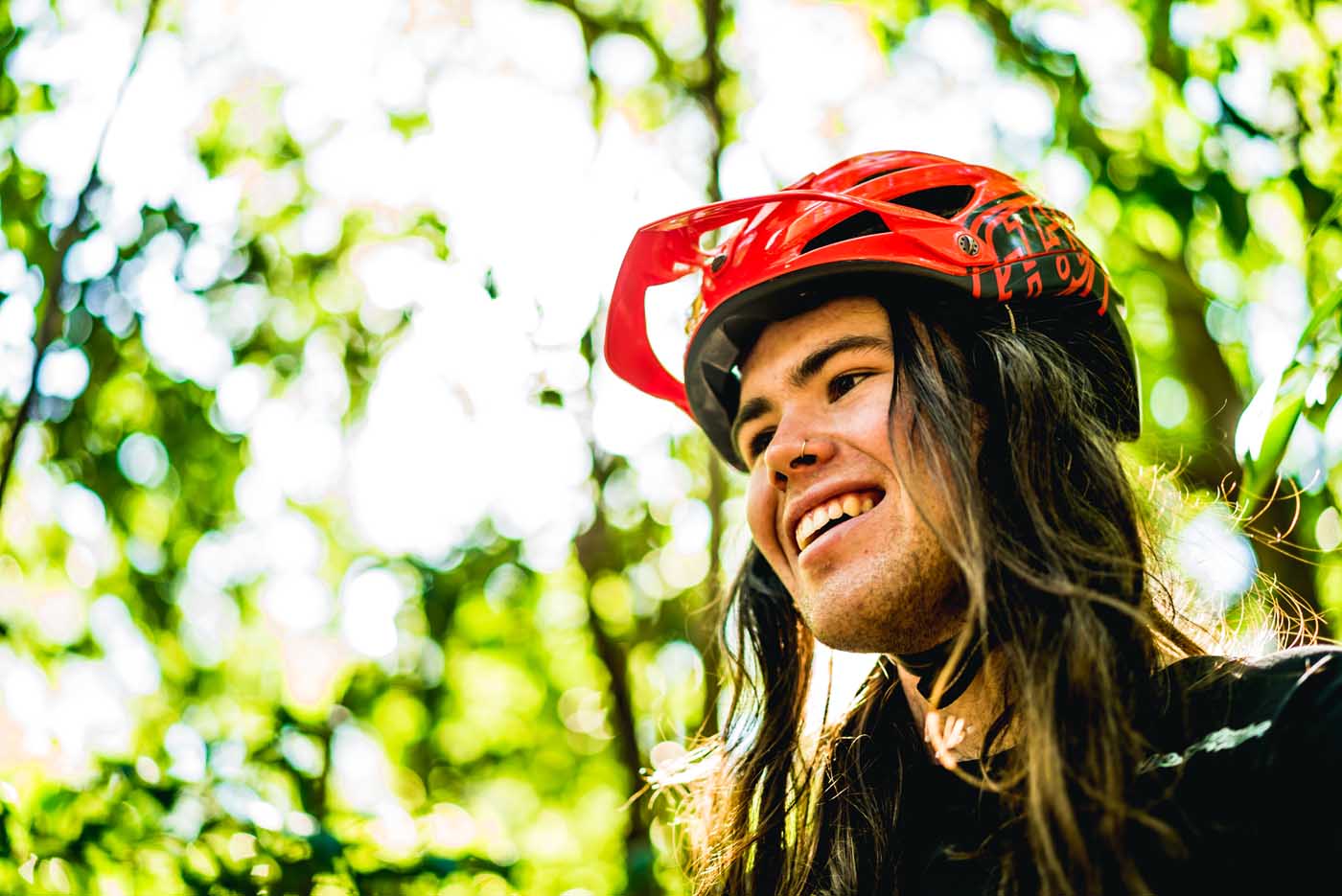 The Best Day Ever with Remy Morton

If there’s one Australian rider that has been shredding the wheels off a whole bunch of bikes, it’s Remy Morton.

Aside World Cup racing and shredding BMX’s on anything and everything, he’s definitely made a name for himself on the biggest jumps at the Fest Series. Although he shredded those hits with the worlds best in the days leading up to the event, sadly he over shot a 75 foot jump, going maybe 100 feet flat to his head. He shouldn’t be alive let alone riding 6 months later. We caught up with Remy at the recent Vans Bowl Comp and subsequent afterparty/video premiere of James Fox’s full length BMX production, the dude that also made the edit below that you’re about to press play on, showcasing just how determined he is to be shredding once again. Watch the vid then read on for an insight into Remy!

Man, what a year? From racing and riding with the best, on the best trails and kickers you’ll find anywhere in the world no less, it all went from being the best life ever to pear shaped pretty damn quick… What Happened at LooseFest?

Haha! Well as far as I was aware nothing ever happened out of the session and I just continued my trip as it was planned… until I woke up a month later and it clicked to me that I had just been in a coma for 3 weeks and couldn’t even lift a finger ha!

When Niko first mentioned to me that I could ride if I wanted I was mind blown, It was the first ever event that I’ve actually had to fully think about if I wanted to do and even to the point where I asked my parents permission to do it haha. I knew deep down I wanted to but I think I needed a little bit of re assurance from my parents to confirm my choice. I’m pretty sure my dads reply was something along the lines of ” don’t be a pussy ” sooo…. I went for it! Ha!

Big jumps are hard to find on this planet, let alone Australia, how was hitting the Lossefest set up?

There’s definitely not much around like Loosefest in the world let alone Australia. I guess that’s where riding and being amongst the bmx trails scene stepped in and gave me confidence of my jumping skills, In the last few years I’ve been fortunate enough to ride some of the worlds best under the radar bmx trails which are obviously smaller gaps. But definitely the same amount of air time as the Loosefest jumps which in your mind seems totally different but it’s still the same lofty air time feeling so I felt fully at home hitting the jumps with that same floaty feeling.

So I gather you don’t remember shit from the crash? Only time I KO’d myself for 20 mins I have sweet FA recollection of what happened?

I actually remember the whole day perfectly fine right up until going off the lip of the jump… I even remember going into the lip thinking “this is gonna be sick!!!!” And as far as I knew at the time I nailed it.

Hitting my head was something I was very concerned about when I came to it enough to be asking the doctors what was actually wrong with me.They said that I didn’t even hit my head hard and shortly after I hit the ground I tried to stand up and walk it off. But having a snapped hip and dislocated leg, apparantly I collapsed pretty quickly haha. A huge shout out to Troy lee Designs on there amazing protection. That helmet may have saved my life.

Come waking up and getting the lowdown from doctors, what was the breakdown of damage to you?

All I knew for a while was that I was crazy sore and couldn’t even move because I was tied down to the bed so that I couldn’t move any of my lims as basically every part of my body had a broken bone. Seeing as there was a huge language barrier though, I had no idea what I had properly done to my body for weeks after being awake.

How long did you have to stay in Euro land for after the crash?

I think I was in Europe for a total of 8 weeks after my crash. 3 of those being asleep in the coma.

And once back did you get a local Doctor on the case to make sure all was AOK?

Once I was home I was still seriously injured.. I think I saw nearly 2 doctors a day for the first 2 months of being home. Looking after my body was basically a full time job, I’m very thankful to all of my family members and friends who were able to transport me in that time while I wasn’t able to drive or commute with out assistance!

How long was the ‘Stay off the bike’ for talk?

They told me I wouldn’t be riding a bike for at least a year… I told them I’d be back on it as soon as I got home, within 8 weeks of the crash I went and rode along the cycle path at the beach and within 11 weeks was riding jumps again.

Seems that BMX dudes are now talking bout a MTB edit you just dropped with a rider that defies all logic and is back on a bike, that dude being Remy Morton. How’d you guys get together to make this epic little shreddit with a story that is something pretty damn epic?

Haha well Remy and I have been mates for a while, we use to dig at the same trails when I lived in the Gold Coast. I’ve always wanted to go to NZ, and at the moment I’m filming for my BMX DVD ‘Have Fun, Die Trying’. So… I decided to fly over to New Zealand to party and film some stuff with a bunch of legends that live over there for the DVD! A couple days before I was booking my flights, Remy called me and asked if I wanted to extend my trip for a week to film a downhill video with him. I said hell yeah!!!

With the initial footage for the crash pulled from social real fast straight after the event, how was it watching Remy nose dive in Belgium and then have to drop it in an edit?

Dude, when I found out that Rem had that crash it was scary!!! All of us were obviously worried. You don’t want to see anyone go through that let alone your mate! Especially when they are on the other side of the world and you can’t do much to help. The GoFund me page that the boys started definitely helped Remy and his beautiful family out!! The hospital fees and everything were insane.

Funny thing is, we were originally going to film a BMX video with some downhill in it, but it was easier for Remy to just go straight to dream line and send those gnarly jumps, because he didn’t have to pull back like you want to on a lip at Gorge Road! His wrist just couldn’t handle it at the time. We literally filmed the riding side of that video in my last day of being in Queenstown. We rode one lap, finished filming, rode back to the house, and i thought, you know what we have to make something epic! People had to see that crash to understand just how crazy it is that’s Rems doing what he does!!! There’s not many people I know that are as positive and stoked on life more than Remy! So I sat down with Rem on the mini ramp and just talked a bit about the crash! It’s still the best day of riding he’s ever had! Honestly i swear Remy isn’t fazed about the footage of that crash. He would go back and send those jumps tomorrow if he had the chance!!

We did a trip for D.A.N.E.S Jam a few months after his crash, and we were at Will Kerr’s trails for a couple of nights. Rem was riding the pump track and jumping the step up only 3 months after the accident…. He shouldn’t of been walking! We were so stoked for him!! It just shows what mind power can achieve through being positive and setting goals!!

With a background solidly in 20inch, hows the transition been to making big wheeled edits?

Dude to be honest, I hardly get to ride these days. Even when I did ride, I was average. But I still love riding!! That’s why I document it, I get to hang out with all my best mates, and show the fun times and make memories!! Filming big wheels is definitely a little different.. Like for instance you could have an entire set of amazing BMX trails in the space of just two jumps on dreamline. So say you’re like four or five jumps down the line, you can’t talk to ya homie while they are up on the roll in. You just gotta wait til you hear tires rolling through the line, and then start recording.

I guess Remy is the anomaly, blurring the lines of what bike shreds best?

Haha yeah well he definitely shreds anything with two wheels, but I do remember we were down at the trails one day, and Remy was riding his hardtail. I told him to go buy a 20inch, he did, and basically set it up so it felt like a hardtail. Big perfect ten bars, top loader stem. But man did it look good cruising though the trails!!! There’s this one booter in one of the lines, and it just didn’t look as comfy on big wheels as it does on a BMX bike!! Love seeing that dude get sideways over that jump!!!

Any similarities between the two ‘cultures’?

Hmm dude, I stayed in a MTB house when I was in NZ for nearly two weeks!! They were the most sound, loose bunch of legends!! End of the day we are all it for the good times!! Ride bikes, have fun!!!

Whats in store edit wise on the big wheels front?

Man, any things possible to be honest, I’m trying really hard between work and other commitments to get this DVD done in the next month or so. But after this silly season for videos slows down, we will see what happens. Definitely always down to film with  Remy!!

You can watch the trailer for James full length vid ‘Have fun, die trying’ below. It’s epic!

It’s been a year since that big slam, and of course since we did this, Remy headed OS and had been ruling, before another crash busted his leg. But weeks later he’s racing Mega Avalanche. Tough dude indeed. We salute you Remy!