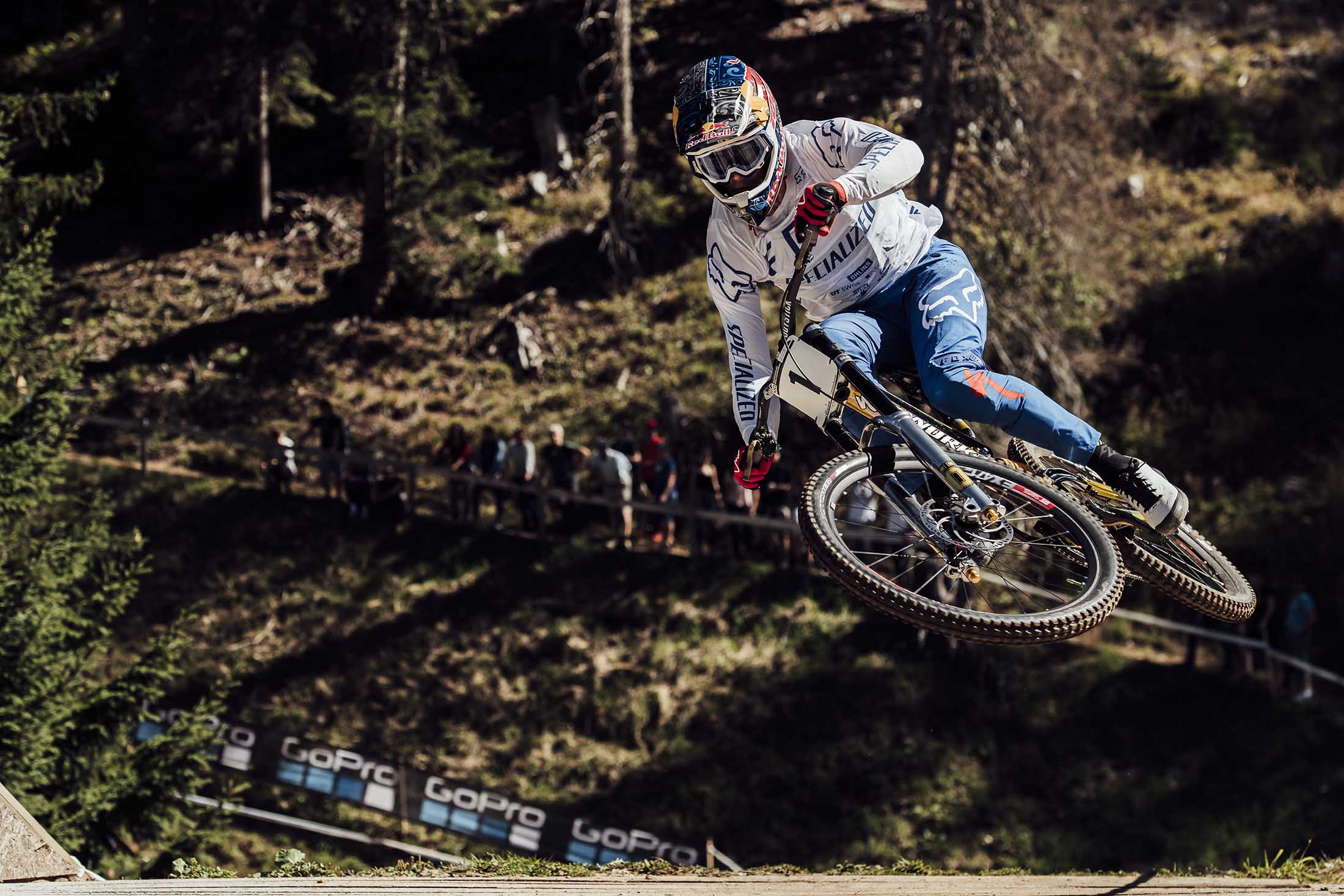 World Champs in Lenzerheide was wild!

It all comes down to one run. With the World Cup Season wrapped up, the World Championships brings a whole new level of roll-the-dice to racing downhill.

The steep, short and intense track at the 2018 UCI DH world Championships in Lenzerheide, Switzerland, packed everything a Worlds track needs into three minutes, with plenty of rock gardens, high speed corners and more than enough steep sections to keep even the most die-hard DH’er satisfied. Off the back of some damn wet weather, a perfect day in the mountains greeted the fans who’d turned out in their thousands to watch the races for the coveted world champion’s rainbow jersey and a place in mountain bike history. 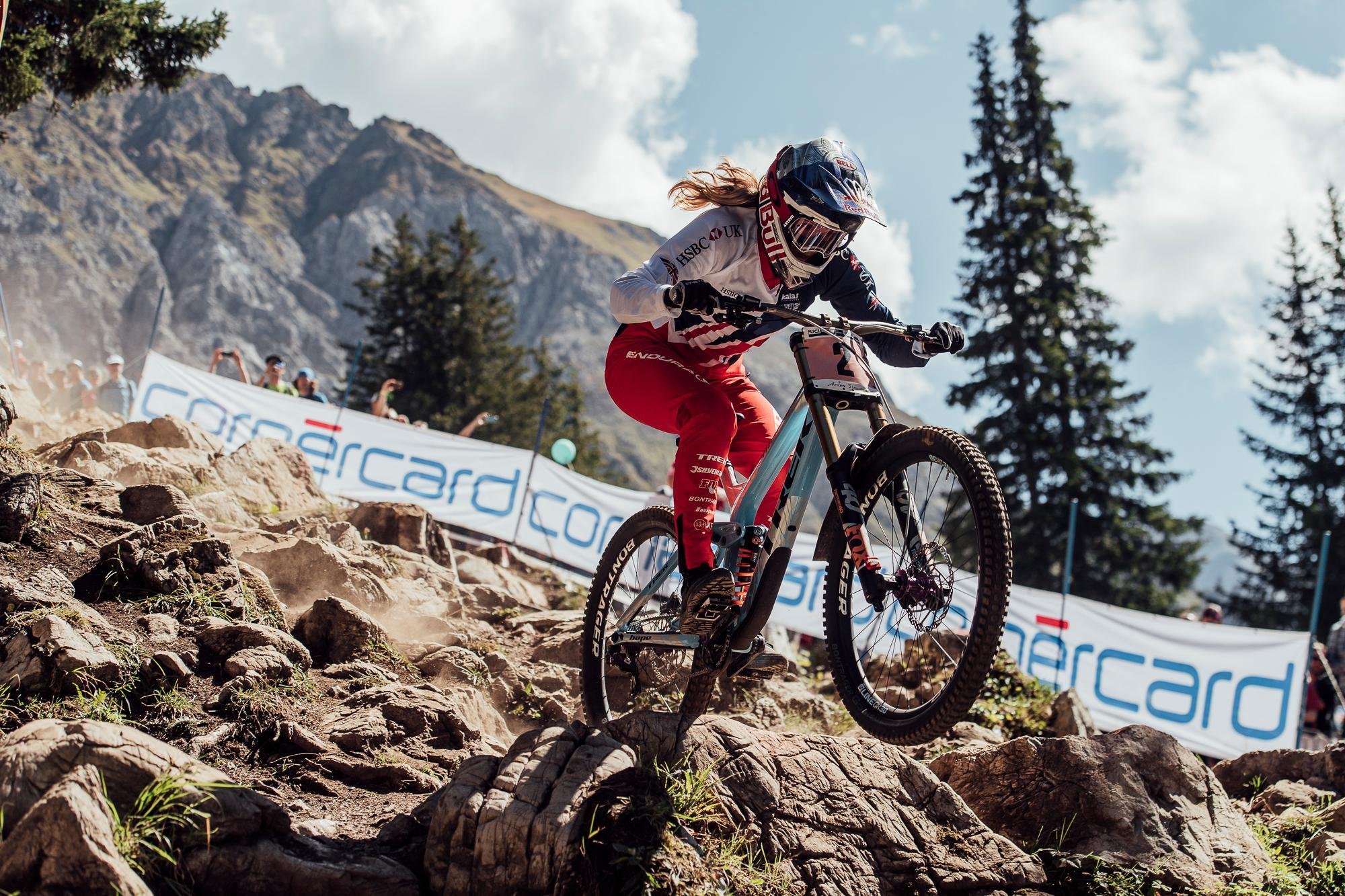 Going into the top 10 ranked Elite Women, it was France’s Morganne Charre who was keeping the hot seat warm, after knocking off Swiss rider Janine Hubscher and ruining the Swiss 1-2-3 that they’d held for the majority of the race.

Switzerland’s last hope of a Gold medal lay on the shoulders of Emilie Siegenthaler, who’d been missing from the last World Cup rounds due to a dislocated elbow sustained at the Swiss Championships. Looking strong on the track, she lit up the split times green and to the cheer of home crowds knocked Charre from the top spot.

Going into the top five riders, Myriam Nicole was set to strengthen the French presence on the podium. On the comeback from a back injury sustained at the World Cup round in Val di Sole, and a DQ in qualifying, Nicole knew what it would take to win on this track, having won there in 2017. A fast run saw her turn the timing splits green and she France into Gold and Silver positions, taking a big five seconds off Cabirou’s time to lead the field. 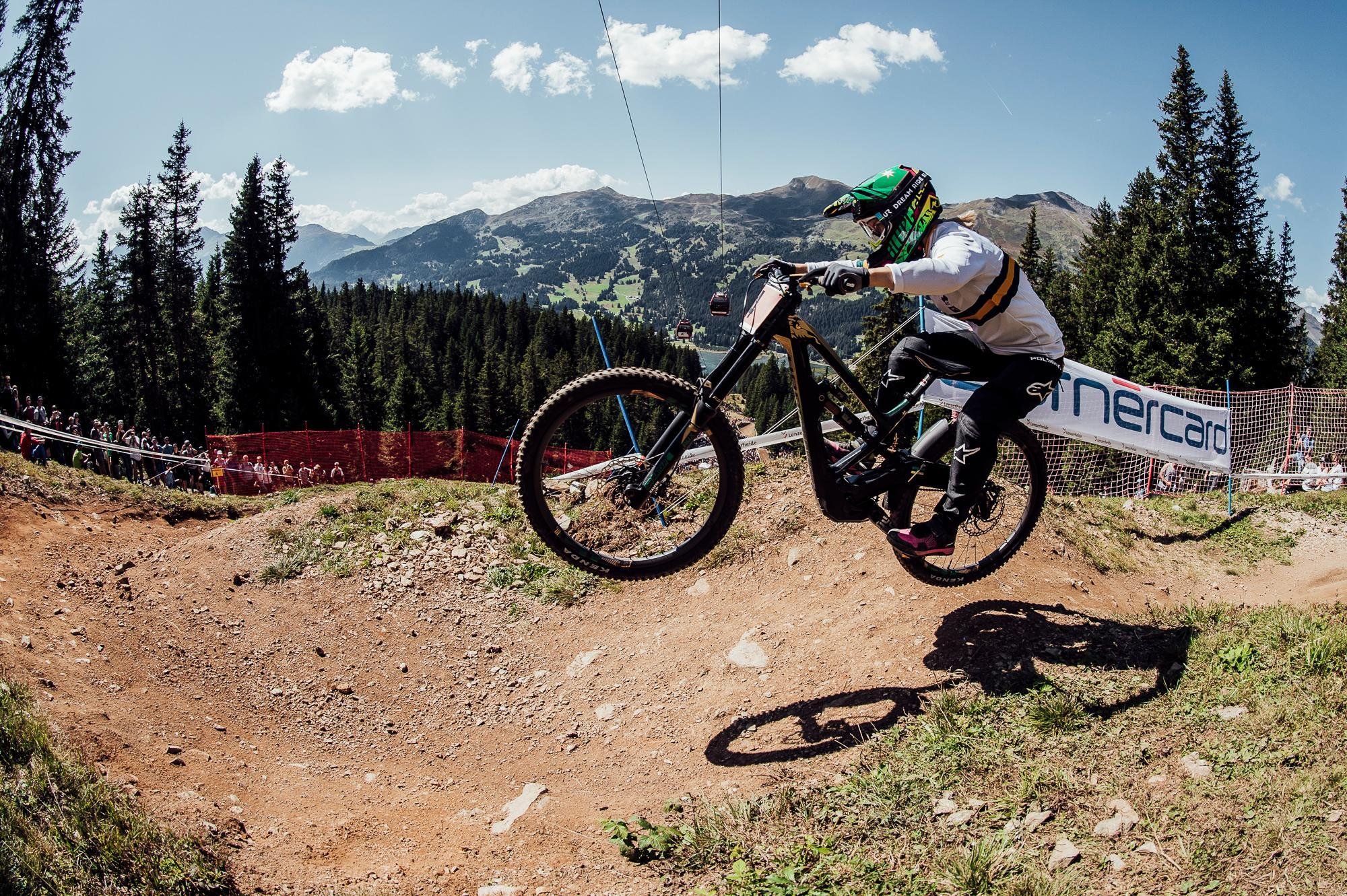 Tracey Hannah sent it hard for her chance at the Gold medal, and as one of the most committed riders out there she was going all out. In touch with Nicole’s time and picking good lines, she just didn’t have the same pace and lost some time towards the end of the track.

Next up was British hopeful Tahnée Seagrave. Coming off the back of a World Cup season littered with wins, she had all the motivation to aim for victory. An aggressive start saw her up on the timing splits, but riding noticeably more carefully towards the end of the course, she was back on Nicole’s times at Split 4. However, in a final bid for glory she managed to claw back that time and went into the lead just 0.69 seconds. All Seagrave could do was look on nervously from the hotseat, and she had right to be nervous, as Atherton knows what it takes to secure the wins. Having just clocked up an unprecedented sixth World Cup overall title, and with four World Championships titles to her name, Atherton is serious competition. A Silver medal wasn’t what she came for. 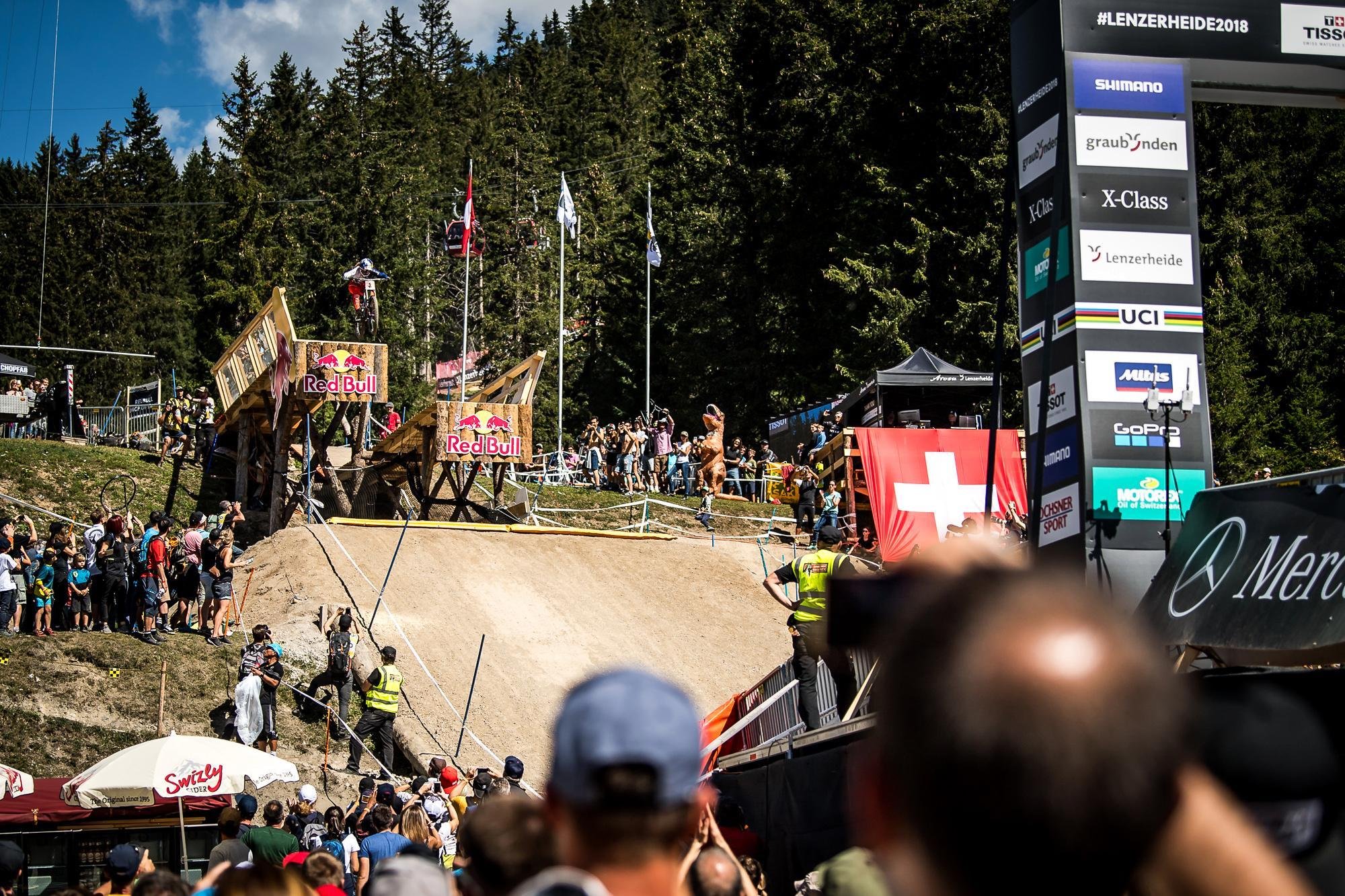 Riding hella fast right out the start, Atherton threw everything at the race. Her direct, very quick line through the rock gardens saw her demolish the timing splits. Riding at a pace that no one else in the Women’s field can even challenge, by Split 3 Atherton was already 8.5 seconds ahead of Seagrave’s time.

Extending her blistering pace all the way to the finish, Atherton crossed the line nearly 10 seconds ahead of her competition to claim her fifth World Championships Gold medal and firmly cement her name in the history books.

“I can’t believe it. I knew it was going to be a hard race and that I was going to have to ride fast. It was an amazing race, the crowd was wild all the way down.” 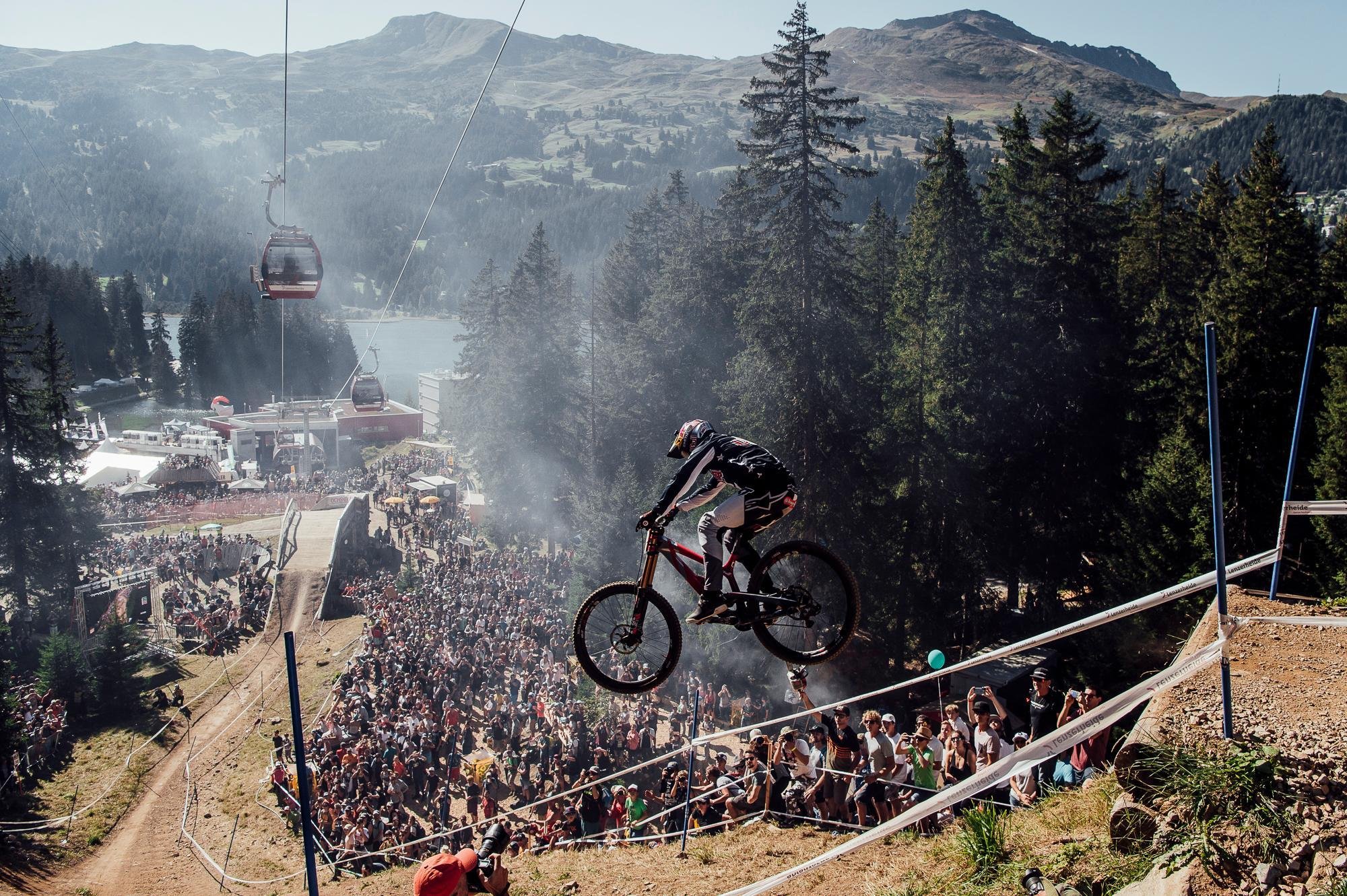 The sunny weather was rapidly drying the track as the Elite Men took to it for their race. In open sections, the moisture that had provided steady grip since Qualifying on Friday was gone, with a slick top layer of dust now appearing in it’s place. In the covered wood sections, areas remained damp, though, with the roots particularly slippy.

The track was running faster than in Qualifying, but it took some time for the first rider to go under three minutes. Greg Minnaar was that rider. The South African legend started quite high up the field due to his low UCI ranking, but showed his class to record a time of 2m 57.788s and go into the hot seat. He would be there for what seemed forever.

A slew of riders came down the hill after him, but no one was in the same league as Minnaar. He was finally unseated when the man of the moment, Martin Maes, recording a time that was just under 2.5 seconds faster that Minnaar’s. The Belgian won the last World Cup race in La Bresse and had been fast during practice and qualifying so it was no surprise that he put in such a run. Enduro fitness and skills are proving to be a big plus in DH right now…

Aaron Gwin came the closest to Maes as the entry got down to the top 10 ranked riders. The American was typically finding time where others couldn’t, but a mistake in the woods sent him sideways and almost into a crash. Gwin kept control, but that mistake meant he lost his pace and by the time he crossed the finish line he was over a second back on Maes. He slotted into second for the time being. Both Aussie Intense riders stomped solid runs as did Connor Fearon, with Lucas dropping into 11th, Moir in 13th and Fearon in 15th.

Luca Shaw, Laurie Greenland and Brook Macdonald made no impact on their runs, the latter hitting the dirt, and riders seemed like they were really struggling to find grip in the open sections of the course, where it was beginning to get blown out in areas.

Defending 2017 World Champion Loïc Bruni had a mixed World Cup season, but you don’t win the World Championship twice by luck and the Frenchman attacked the course on his run. He was on par with the split times of Maes as he came down the hill, and when he crossed the finish line his time was 0.213 seconds faster than Maes. We had a new race leader.

Bruni’s French team-mate Loris Vergier and Britain’s Danny Hart both looked like challenging Bruni’s time, but mistakes cost them dear. Hart’s time was agonisingly just outside that of Maes, but he slotted into third, while Vergier’s time pushed Gwin down from fourth to fifth.

Two riders were left to go at this point, Troy Brosnan and Amaury Pierron. Both had suffered their own trials and tribulations since arriving in Switzerland, and hadn’t been running fast. Brosnan was on a flyer but wasn’t riding as aggressively and slotted into ninth, while last man down Pierron crashed on his run. He was always down on Bruni’s split times before the crash however. 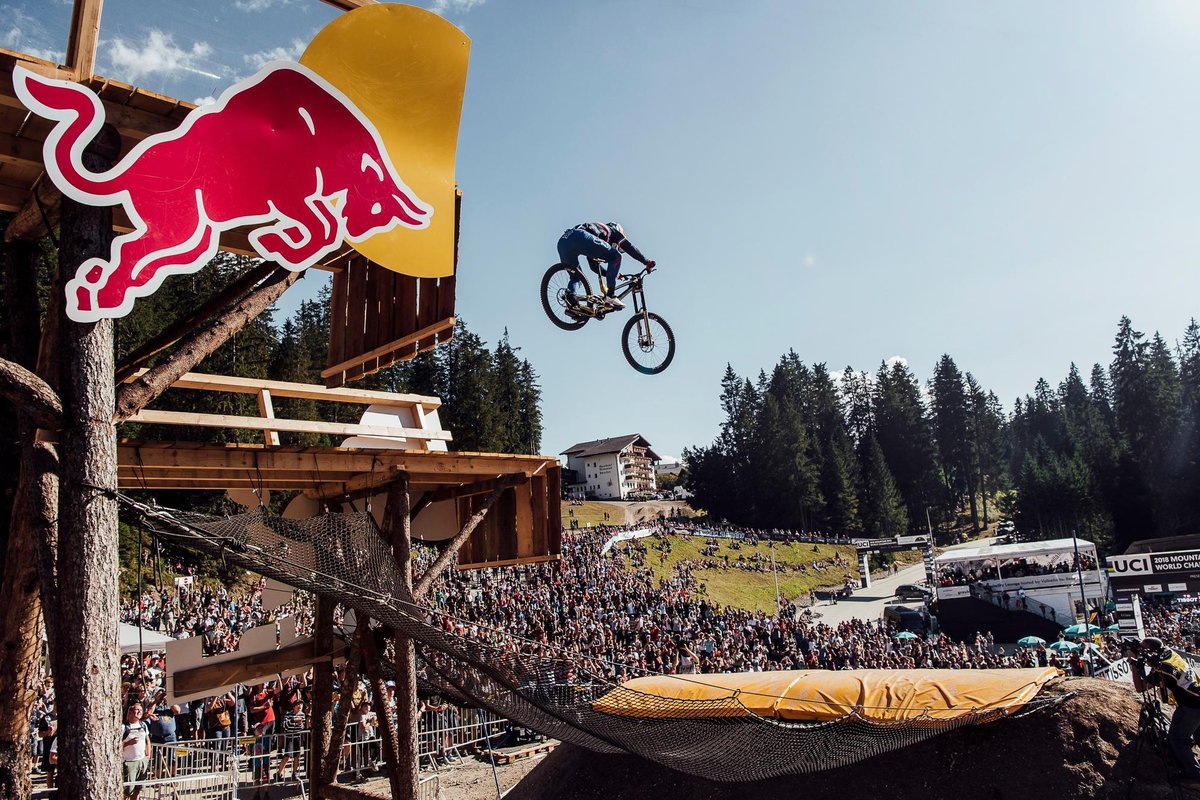 Celebrations erupted in the finish area, with Bruni being congratulated by the French team. He’s now a three-time World Champion, a feat he shares with Greg Minnaar. He’s some way down on the seven world championships that legendary fellow countryman Nicolas Vouilloz holds, though. At only 24-years-old however, who would bet against Bruni equalling or bettering that achievement in the years to come?

“I’m so happy, I had a pretty contrasting year, with a lot of bad results and some good ones, but it couldn’t finish on a better day. I’m stoked, it’s insane.”

In the juniors, details are scarce as we post this, Kye A’Hern came so close to the gold, just missing out for a silver and Matt Carter nailed a 11th place which brings a new gen to the pointy end of World Championship Aussie shredders…

Thanks to Red Bull for their epic coverage and photos.

You can watch the full replay from Red Bull right here.