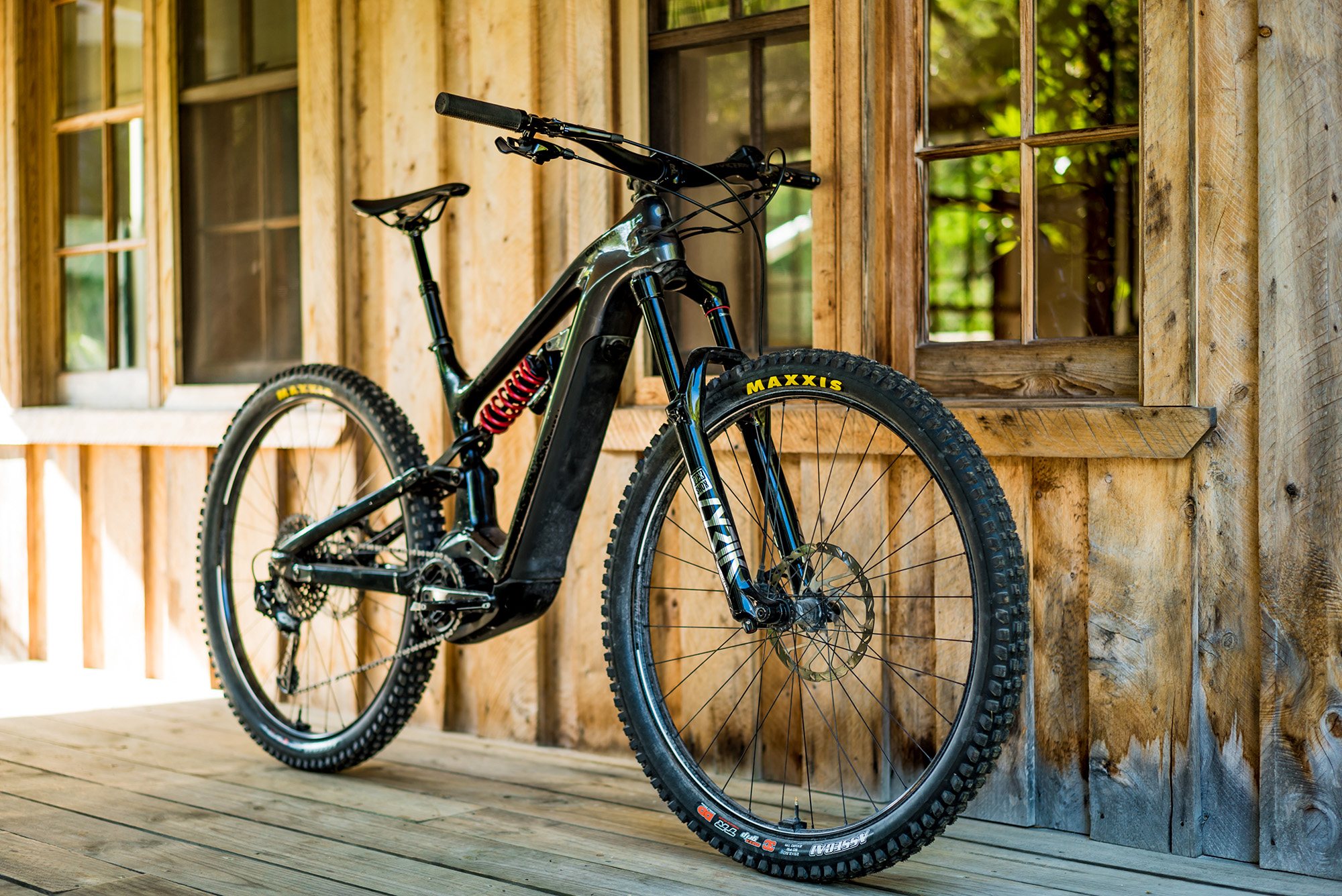 Rob is known as more of an adventure rider who often treks way out into very remote wilderness in search new places to ride. We sit down with him to dissect his ride, the Cannondale Moterra.

[E]vo: Since adding an e-Bike into your arsenal, has it changed the possibilities of where you’re able to explore?

Rob: My idea of a good time is pawing over maps and aerial imagery trying to find forgotten trails in epic landscapes or searching new places for natural features, mostly big rock faces that might be rideable. My favourite place to explore is on the West Coast of Tassie where its mining history has created a legacy of exploration routes and trails linking mines and abandoned settlements. I really like mountain biking in the mountains. The Moterra has definitely made me more effective covering ground and keener to explore possibilities that are going to involve some big elevation changes, slow rolling surfaces and unknown distances. I used to take the moto to scout new zones, but the e-Bike has made that almost redundant. It also makes it easier to push into terrain that I’m not a good enough rider to tackle on the moto. While it’s not the best time to shoulder 23 kilograms of e-Bike, it’s possible, where for the moto these occasions meant turning around or taking a walk.

So far what’s the furthest you’ve ridden the Moterra in a single ride, including elevation?

I honestly don’t pay too much attention to the numbers. That said, I’d have to say I tend to drain the battery with elevation rather than distance. Thinking back over a few rides I’d guess I’d top out at 1500m climbing but over relatively short distance – 30 kilometres or less but then I rarely return home with less than 40% battery. This is probably the place to preach how being able to gain elevation quickly and easily had changed the way I ride our local trails and has made non-shuttle’able trails, that previously weren’t worth the effort or up-time to down-time ratio for me, far more attractive. There are some steep, low-speed, tech trails near where I live which without the Moterra I’d usually lap twice before taking another trail of half the elevation out. With the Moterra, I can ride from home (6km’s from the trailhead), ride 6 laps and home again in about the same amount of time. It’s so much more efficient and the extra time descending for every hour of riding definitely increases your confidence and ability on the bike. Riding solo or with others on e-Bikes I end up just as worked as if I’d been riding my other bike, and I think you still maintain or develop pedal fitness. Despite having mostly adequate fitness for the riding I want to do, dealing with the psychological trauma of recalibrating your expectations of the amount of forward movement that results from a given amount of pedal pressure on the Habit after a bunch of rides on the Moterra is the real challenge.

One of the things we’re always curious to find out is the different power assist settings that a rider uses. Obviously with the Bosch CX motor featured on the Moterra you’re a little spoilt for choice with the ‘eMTB’ mode option. That said, during your regular e-Bike rides do you find yourself switching between modes very often?

When I first got the Moterra, I was a little more conservative in my mode selection, always dialling it down to the lowest setting required to get the job done while maintaining maximum range. After getting a feel for the relationship between my effort, elevation, mode selection and range I pretty much spend all my time in the eMTB mode. I really only use the lower settings when I’m riding with folks that aren’t on e-Bikes. On those occasions I’ll drop it back to Tour, Eco or even turn it off if I’m feeling really energetic or they’re not! I’d say I switch trail selections on rides now more than I change modes.

How would you describe the personality of the Moterra in terms of how it rides?

Stable and composed! When I got the bike, to be honest, I was (and still am) so stoked on how much descending I was able to get on the Moterra, I really didn’t ride my other bike (a Habit SE) for about a month. I found I got so used to the combination of geometry, a bit more travel and extra weight of the e-Bike I actually found it hard to adjust again to the nimbleness of the Habit. Now I make sure I swap between the two every week. The extra mass of the Moterra, relatively slack head angle, suspension and long wheel-base definitely combines to create stability. With the increase of sprung relative to unsprung mass of an e-Bike and the quality suspension I’ve got fitted you’re more isolated from trail impacts, your suspension works harder and you have less force from trail impacts transmitted through the contact points. With the geometry, suspension, tyres and wheels I’ve got fitted, fast, rough, flat turns are pretty fun. 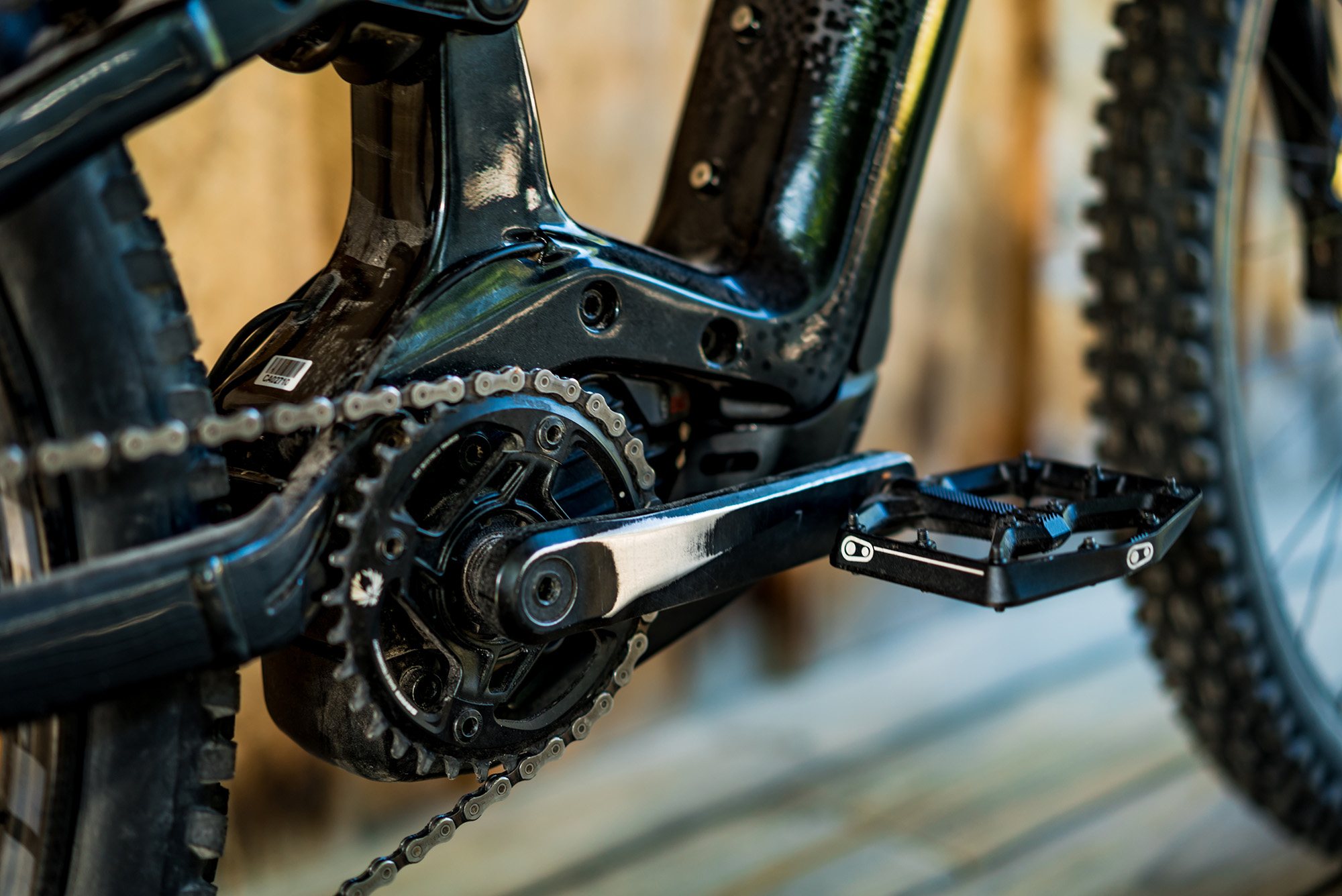 How tall are you and what size frame have you been riding?

I’m 183cm and am riding a Large. I actually spent the first few months before production models were available on a pre-production medium frame which with a 50mm stem. I feel comfortable on the Large running a 30-40mm stem. I’m tempted to experiment with an XL but expect that the stability gains of the longer wheelbase may be outweighed by my reduced range of movement in a more stretched out position.

Obviously you’ve customised pretty much every component on the bike from it’s original spec. Perhaps one of the biggest upgrades would be the rear shock, swapping from the stock air unit over to a coil. How much different does the bike ride with the coil?

So the Moterra Neo 3 is the lowest model in the Moterra Neo range, but as the range all share a common frame, the Bosch Performance CX drive unit and I liked the low-key colour of the 3 and tend to change spec to suit my preferences anyway, it was the pick. I did spend some time on the stock shock and while it was perfectly functional, I was interested to see how it’d ride with a coil out back. The coil is a little more supple and the improved damping of the Super Deluxe and the Lyric Ultimate is really noticeable to me. Given how hard a rear shock has to work on the back of an e-Bike on steep, rough trails the temperature stability of a coil with increased oil volume made sense over an air shock with lesser oil-volume.

You’ve got a set of ‘ultra-gucci’ Zipp 3ZeroMoto carbon wheels on there too. How have you found the character of them?

I make clear that I don’t think that the 3Zero Moto’s are intended for e-Bike use. I’m not sure if that’s a categorical restriction or just based on combined bike/rider weight? With that out of the way, I’d used them on my Habit SE where the flex that’s designed into them was really notable in the way they don’t seem to deflect in the same way or to the same extent as other carbon or alloy wheels I’ve used and wanted to get that same effect on the Moterra. They really provide noticeable damping of rough trail surfaces and provide a little more grip. There’s a section of trail at my local that I must’ve ridden hundreds, approaching thousands of times. It’s off-camber, rocky AF with a few diagonal roots. The difference the Zipp’s make on this section of trail that I’ve ridden year’s worth of different bikes, tyres and wheel combinations down is pretty obvious. I think it’s worth mentioning the tyre-wiz that I’ve got fitted and comes with the complete wheel sets. For something that impacts ride quality so much I think a lot of riders (including myself) don’t pay enough attention to tyre pressures. With the tyre-wiz it’s easy to get to your pre-determined target pressure and see when it falls outside the range you’ve set using the app. For reference I’m running 24psi up front and 26 psi rear with the range set  +/- 2psi. Even without a gauge or pump, you can see what the pressure is on the App but I just tend to over-inflate then release air until I get two green lights.

Rubber wise you’ve got a set of Maxxis Assegai’s on there. Have you played around much with different tyre set-ups?

For sure. I’m pretty fussy about tyres as I like to have all the help I can get…  The bike actually comes with a super-sensible tyre spec of Exo+ Minion DHF/DHR2 combo and I think the Minions still have a place with their slightly more open tread design and the versatility that provides. I think the Assegais grip a bit better in hard-pack and dry conditions.  Since I’m a relatively heavy, I like riding steeper, rocky trails and tend to be pretty hard on wheels/tyres I’ve spent most of my time on Double Down or DH casings, usually a DD up front and DH on the rear. I’ve actually just fitted a Shorty up front which is possibly my favourite tyre but that might just be because it only makes sense to run one when it’s steep and loose enough. Being able to run heavier tyres means I can ride a set-up that I’m confident in for riding steep trails which are what gets me excited. Using the heavier, softer tyres with more aggressive tread patterns definitely has a significant impact rolling resistance, acceleration and therefor battery life and range so it’s worth experimenting with set-ups to find the best balance between efficiency, durability and grip for where and what you ride. The same compromise obviously applies to non-e-Bikes but with the e-assistance you can err on the side of more grip and durability.

Any idea what the total weight of the bike is with how you’ve got it set-up?

I honestly haven’t weighed it. I’m guessing around 23 kilograms?