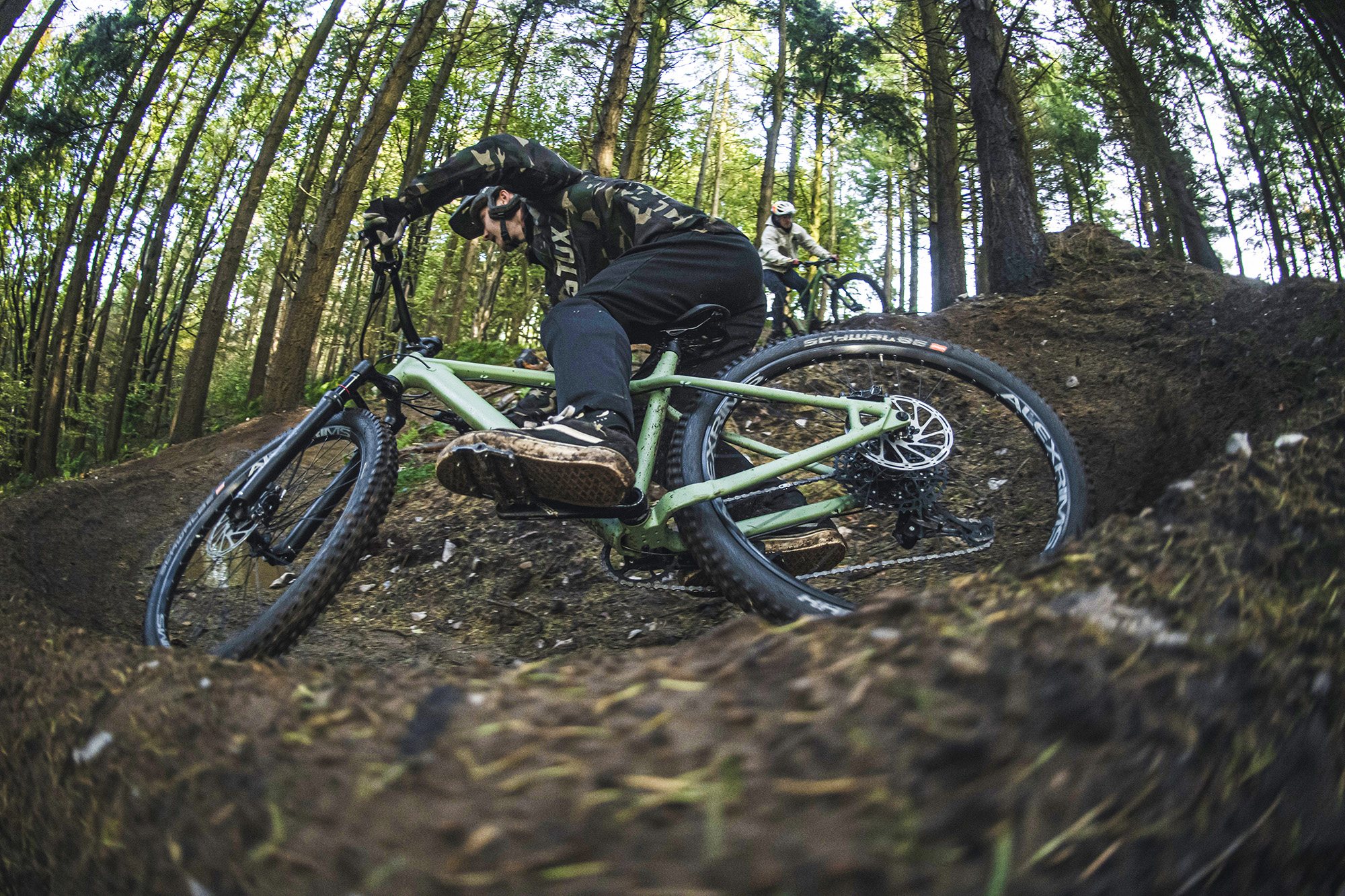 Quite simply put; hardtails are pure. That feeling of ripping along a singletrack on a hardtail truly is MTB personified.

Let’s take a look at 10 of the best ‘hardcore hardtails’ that are primed and ready to head home with you this winter. 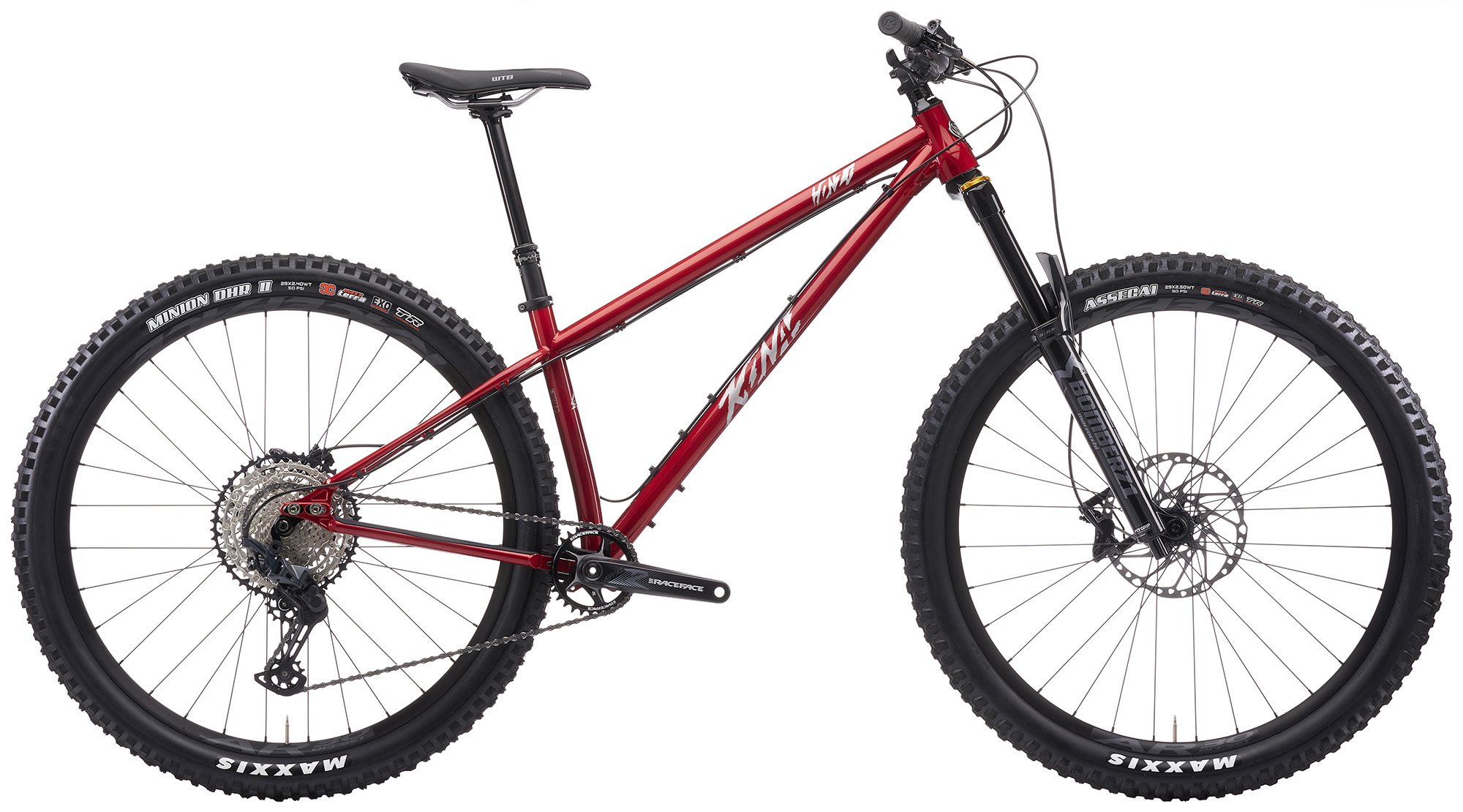 The Honzo ESD is made for riders that want to grab the bull by the horns and rip the hell out of every trail they ride. A brand new addition to Kona’s line-up the Honzo ESD features a Cromoly Butted steel frame which has been specifically designed to run a 150mm travel fork and an extra-long dropper post. True to its intentions as a gravity slaying machine, the Honza packs a super aggressive geometry chart which features a 63 degree headtube angle, a 1245mm wheelbase (model size large) and 417mm chainstays. The Honzo ESD is available as a complete bike or frame only, and there’s also an alloy frame version. 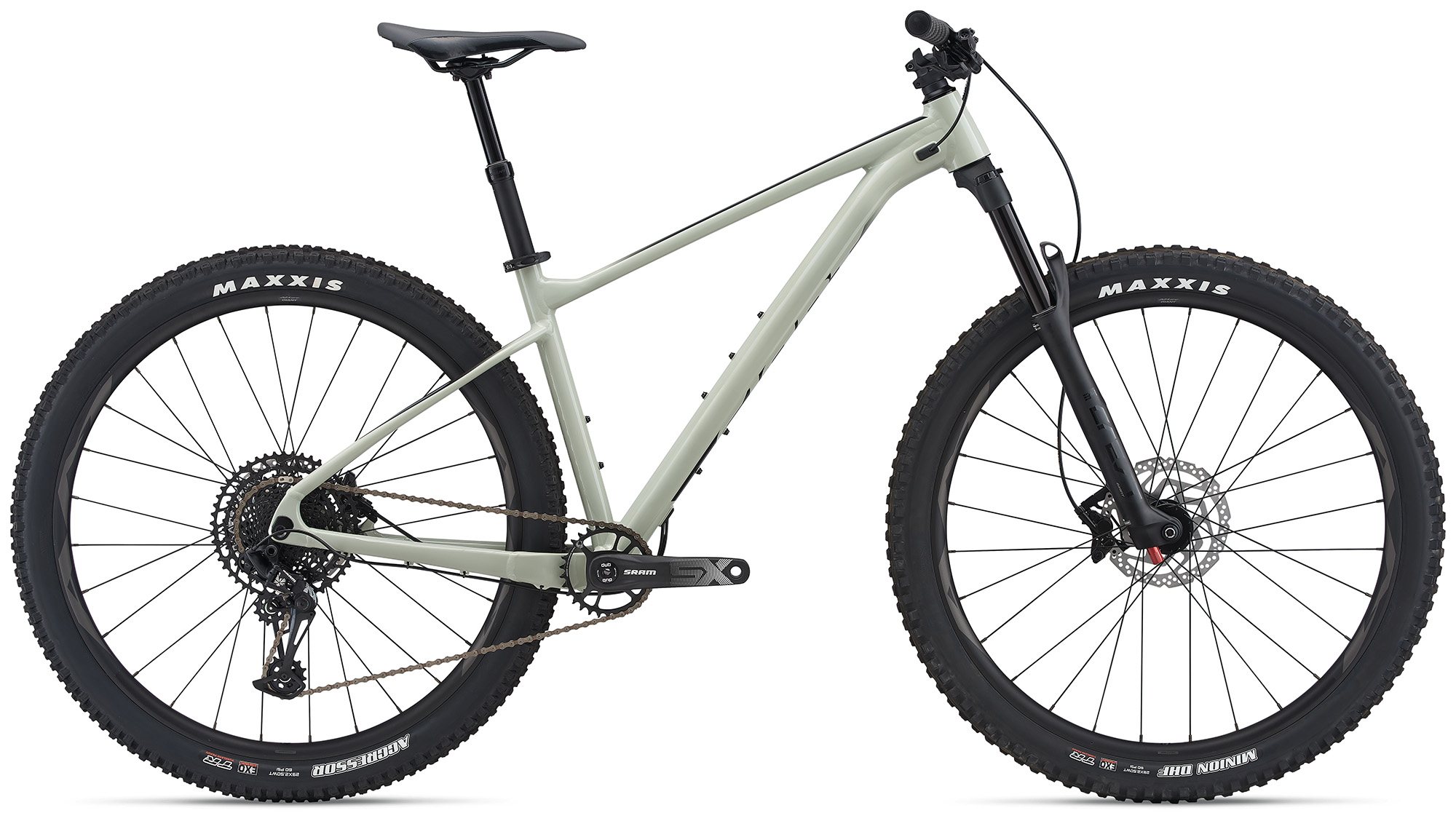 Perhaps one of the stealthiest and slickest looking Giant’s to date, but please don’t be lulled into a false sense of security by its silky smooth appearance because the new Fathom 29 is an absolute hell raiser at heart. Proving that you don’t need a rear shock in order to tackle technical trails the Fathom allows you to crank up steep climbs and blast your way back down the other side. It features a lightweight ALUXX SL aluminium frame which makes the bike nice and easy to throw around, yet it’s been built tough enough to give you the confidence to ‘send’ big trail lines. A 130mm fork is matched with its 66 degree head angle and a well thought out parts spec from front to rear. And best of all the Fathom 29 ‘1’ model as featured above retails for $2299 – which is nearly half the price of some hardcore hardtails out there. 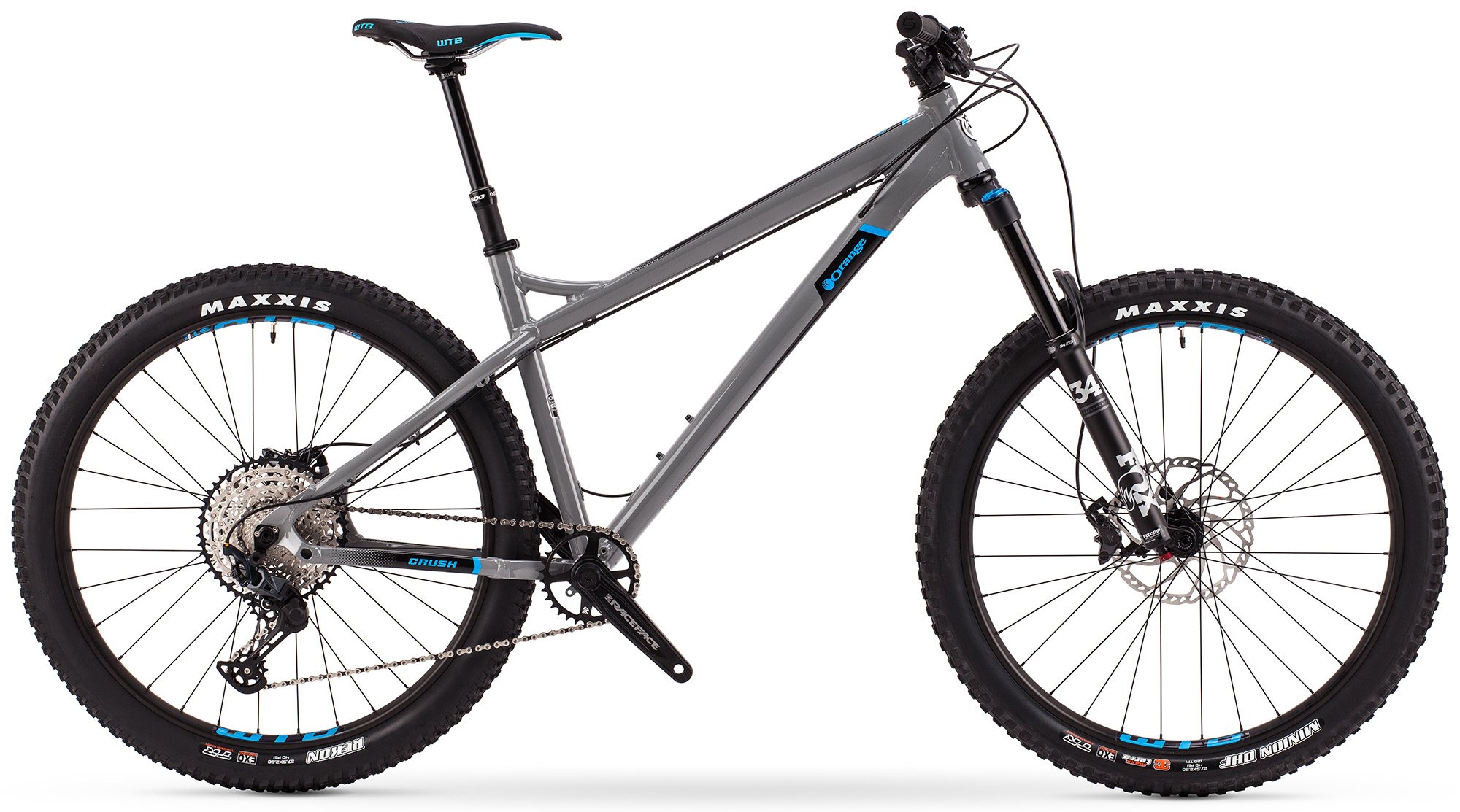 Can you get any more British than square tubing and gussets? Just looking at the Orange Crush is enough to tell you this bike is more than ready to get rowdy. While the tubing profiles and CNC junctions give a classic look, the geometry is one hundred percent modern. The 64 degree head angle and 150mm fork are ready to get rowdy in the steep stuff. Using custom butted 6061-T6 alloy the frame is strong, while light enough to pedal to the party. Full external cables, threaded BB and no gimmicks, some say the Crush is more practical than pretty. Available in 4 builds Ranging from $4,149 to $5,999, the Crush is one of the pricier bikes, but I won’t be surprised if we still see them alive and kicking out on the trails in 30 years time! 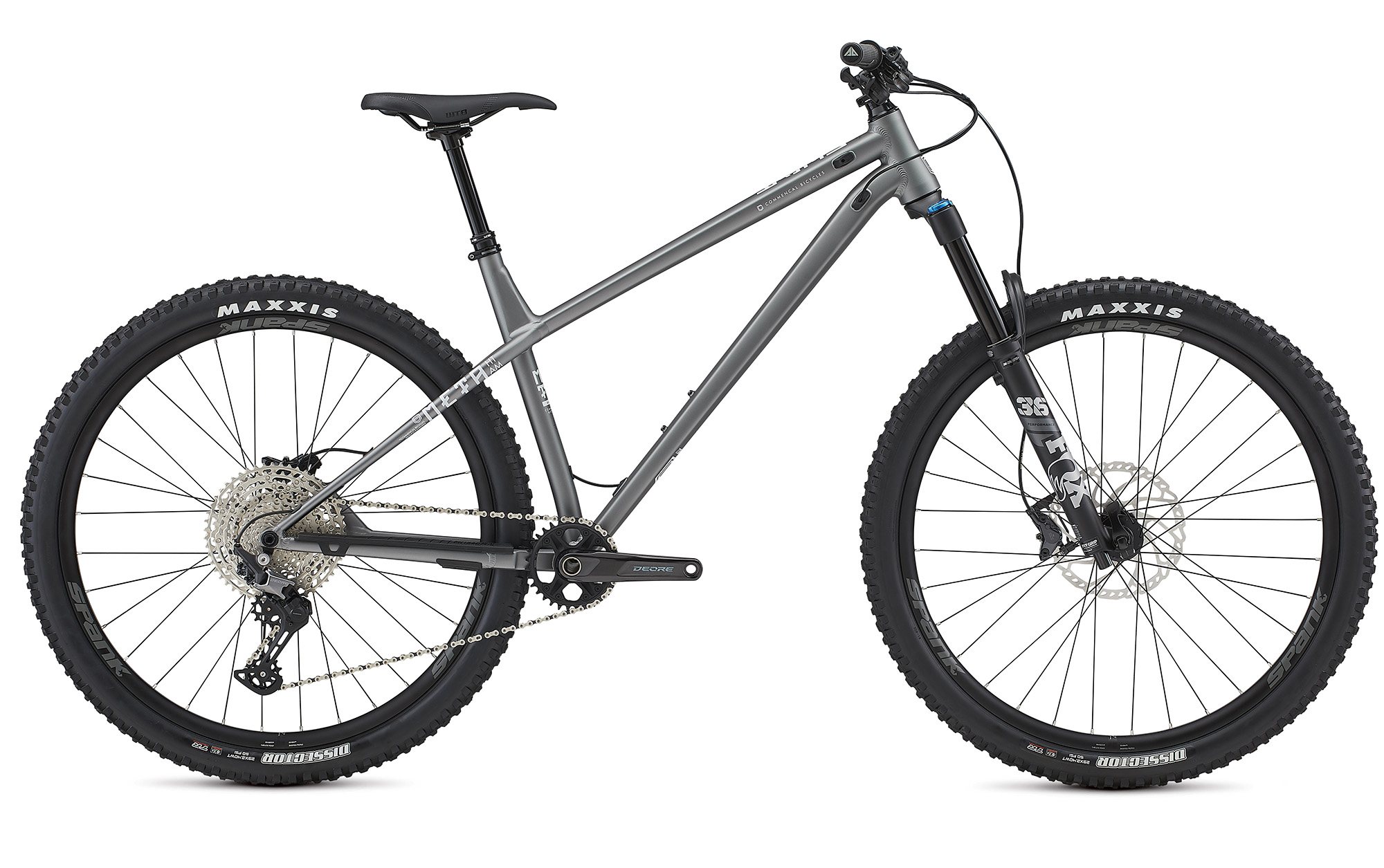 Raw gunmetal grey….. Do I need to say any more? The Meta HT AM is one sleek looking rig. Minimal tubing, flowing hydroformed lines, and no lary graphics. A low slung frame gives you the ability to run a low seat if you want to get a longer race HT. If you want to stay true to size and throw a mid run can-can, you can do so until your heart’s content. If we look at the top spec ‘race’ model, you get Fox 36 forks, Full Deore 12 Speed Groupo, and some burly Spank Spike rims. The specs are simple and practical, all you need to slap berms and test your knee strength. While the Race spec is $3,399 and might be a little too many fun tokens for some peoples budget, you can get on an “Origin” spec for $1,849. That’s right, a sick 150mm hardtail for under 2 grand, where do I sign up? 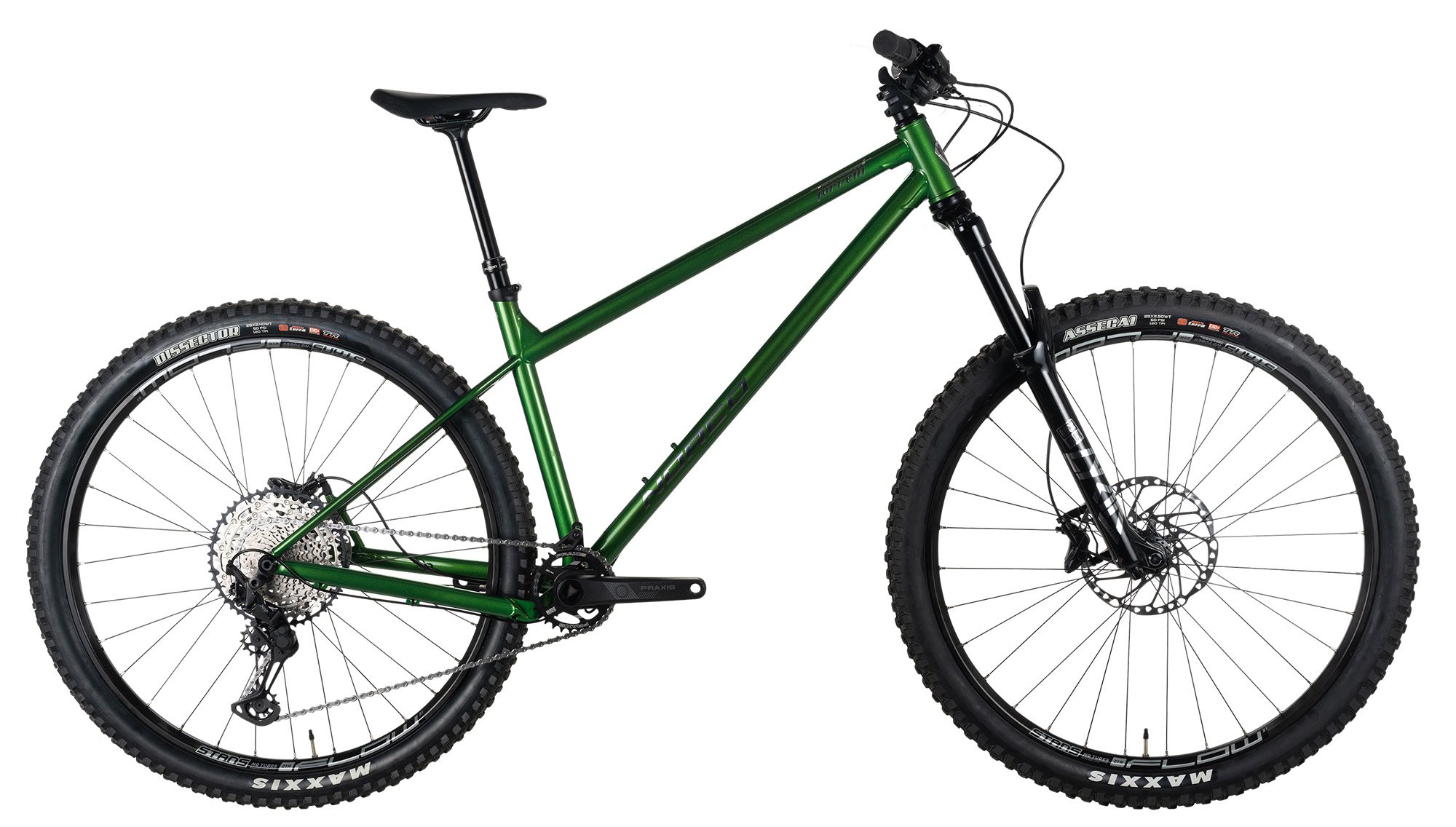 If steel is real then the Torrent S1 is one of the realest on the trails. The historians out there would remember the old Torrent as a boxy, over gusseted frame that would have stopped the titanic from hitting the iceberg if it was thrown overboard. The S1 has been refined and trimmed back,  but don’t fear it will still be ready for the shore. The large frames come with a 480mm reach, 425mm chainstay, and a 64 degree head angle, if you listen carefully you can hear the trails shivering in fear of this bike. The components are up to the task of slapping berms as well. A Lyrik RC2 up front, Stans Flow rims, and XT components, there will be less upgrading and more down shredding!!! 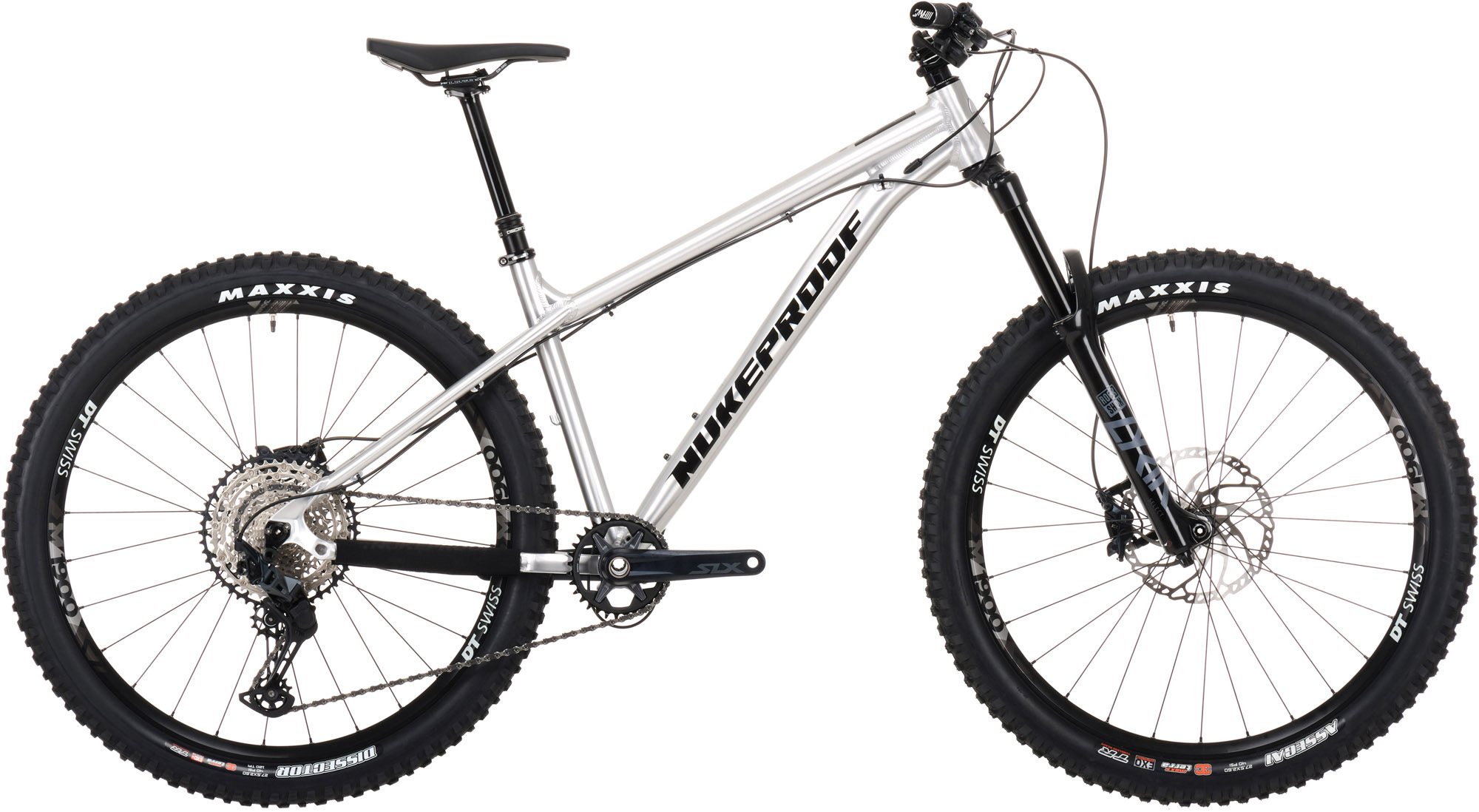 Scout by name, Scout by nature. The Nukeproof Scout has a light hydroformed triple butted alloy frame, a 65 degree head angle, and a 450mm reach on a large. While it may be a little conservative, this hardtail is going to be perfect for backcountry missions. The 150mm Lyrik up front, SLX groupset, and the Dissector/Assegai combo means this Scout is prepared for anything. Oh and one other cool thing about the Scout is that Nukeproof offer it in either 27.5” or 29” wheel size. 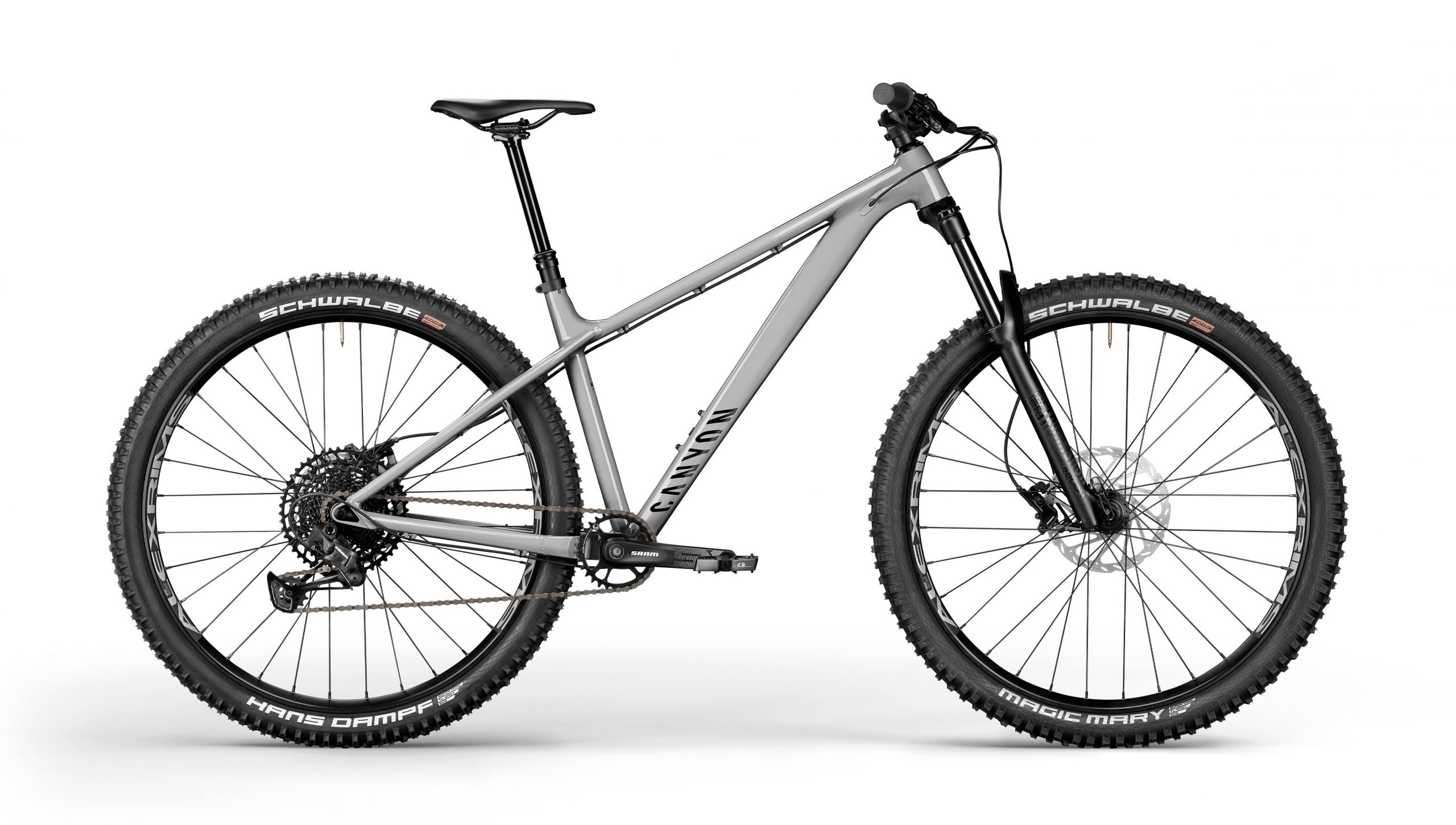 Sleek, simple and strong are all top qualities of a heavy hitting hardtail. The Stoic is all of that and will keep begging for more. Using Canyon’s sleek Euro design language the Stoic looks like a dirt jumper gone rogue. Using 6061-T6 alloy, the stoic will also be stiff and light, aimed at all day epics one day and an impromptu DJ session the next. External cable routing, a threaded BB, and no proprietary parts keep everything serviceable from home. The frame can take up to a 29x 2.6 tyres so traction will be plentiful. With 140mm up front it isn’t the biggest hitting front end, however, it can be tweaked for the riding you discover you like most. Starting at $1,899 this is the perfect rig for those looking at getting into MTB and discovering where they want to go. 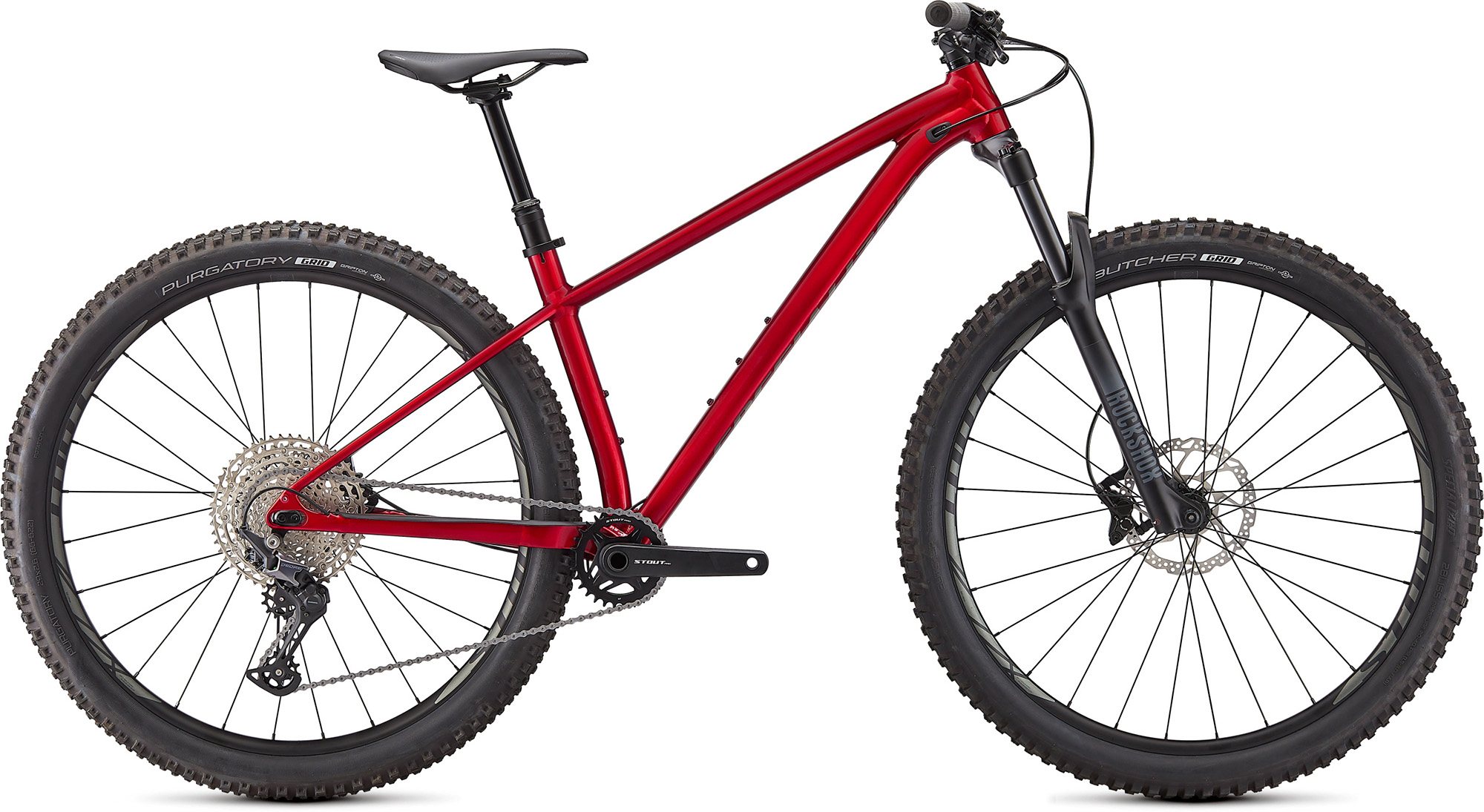 The Fuse is one of the O.G. “All Mountain” hardtails. Aimed more towards the everyday trail riding crew out there the Fuse has a more conservative, economic geometry. The large has a reach of 460mm with a 66.5 (66 on the 27.5) Head angle, translating to a poppy agile ride on any part of the trail. The frame is a lightweight “M4” alloy frame with fully internal routing and smooth welds everywhere. The finishing kit is a fairly big spread of Specialized’s own in house brands while the wheels are a set of Shimanos very underrated trail wheels. With the 29 inch version coming in at $2,600 and the 27.5 is $1,900, both a perfect entry point for those looking for a good base to build on. 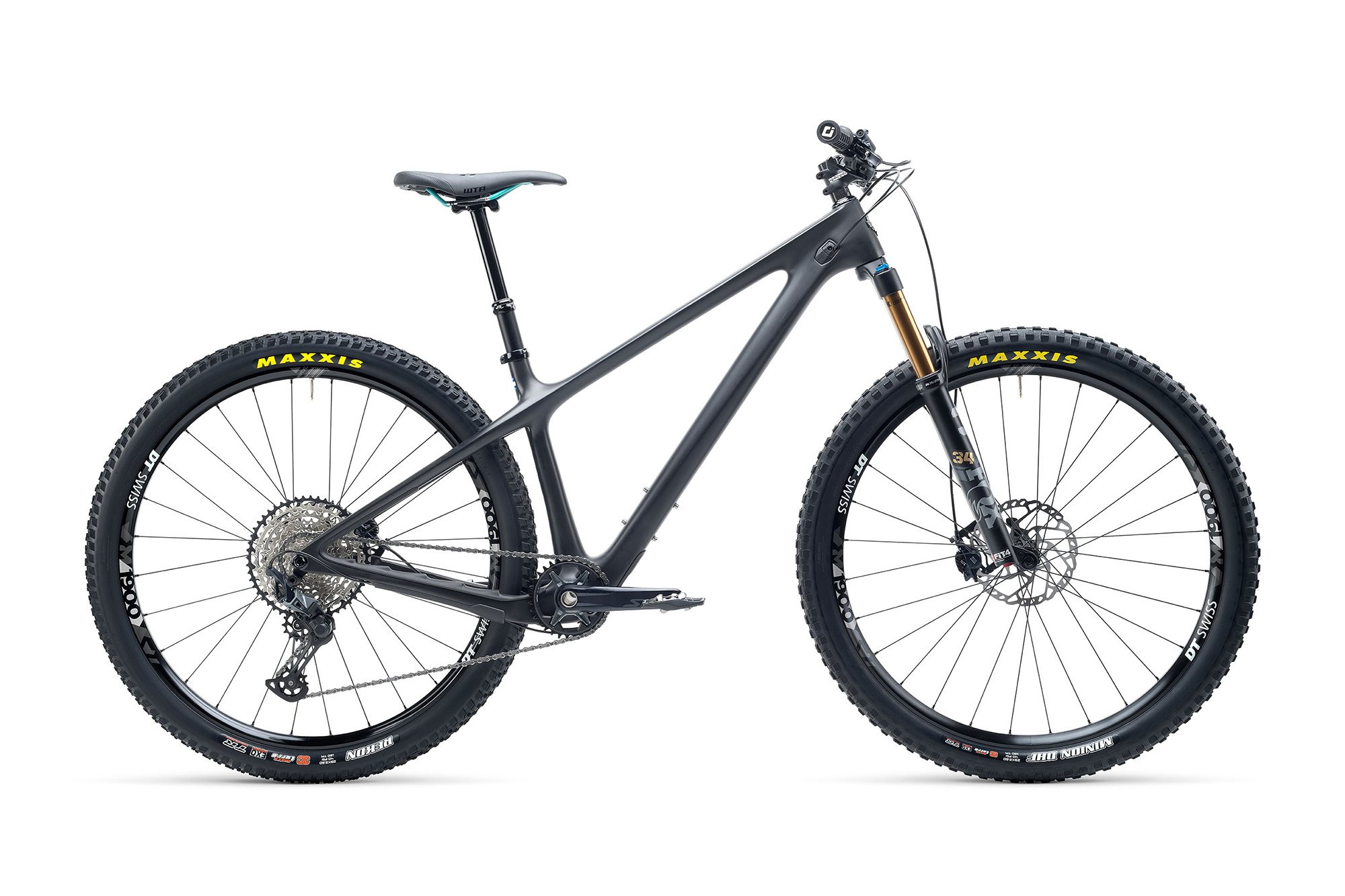 The Yeti ARC is a confusing bike, I am still unsure whether it belongs in an Art Gallery or on the trails. Sure steel is real and brushed alloy is god’s work, but, there is something about the sexy curves carbon can create. The ARC name goes deep into Yeti’s heritage, way back to the early 90’s in fact. The motivation is still the same, go fast and have fun. The frame is not only beautiful but also extremely practical. Cables enter and exit through tubes, moulded channels in the frame. There are ISCG05 mounts moulded into the BB junction, there is more than enough seat tube room for a 200+ mm dropper, and dual bottle mounts for those big days. Leaning more towards a heavy hitting XC bike, the ARC is designed for agility and efficiency. Just like art, it isn’t cheap, the entry level bike starts at $6,900 and the top level is a bargain at $11,700. 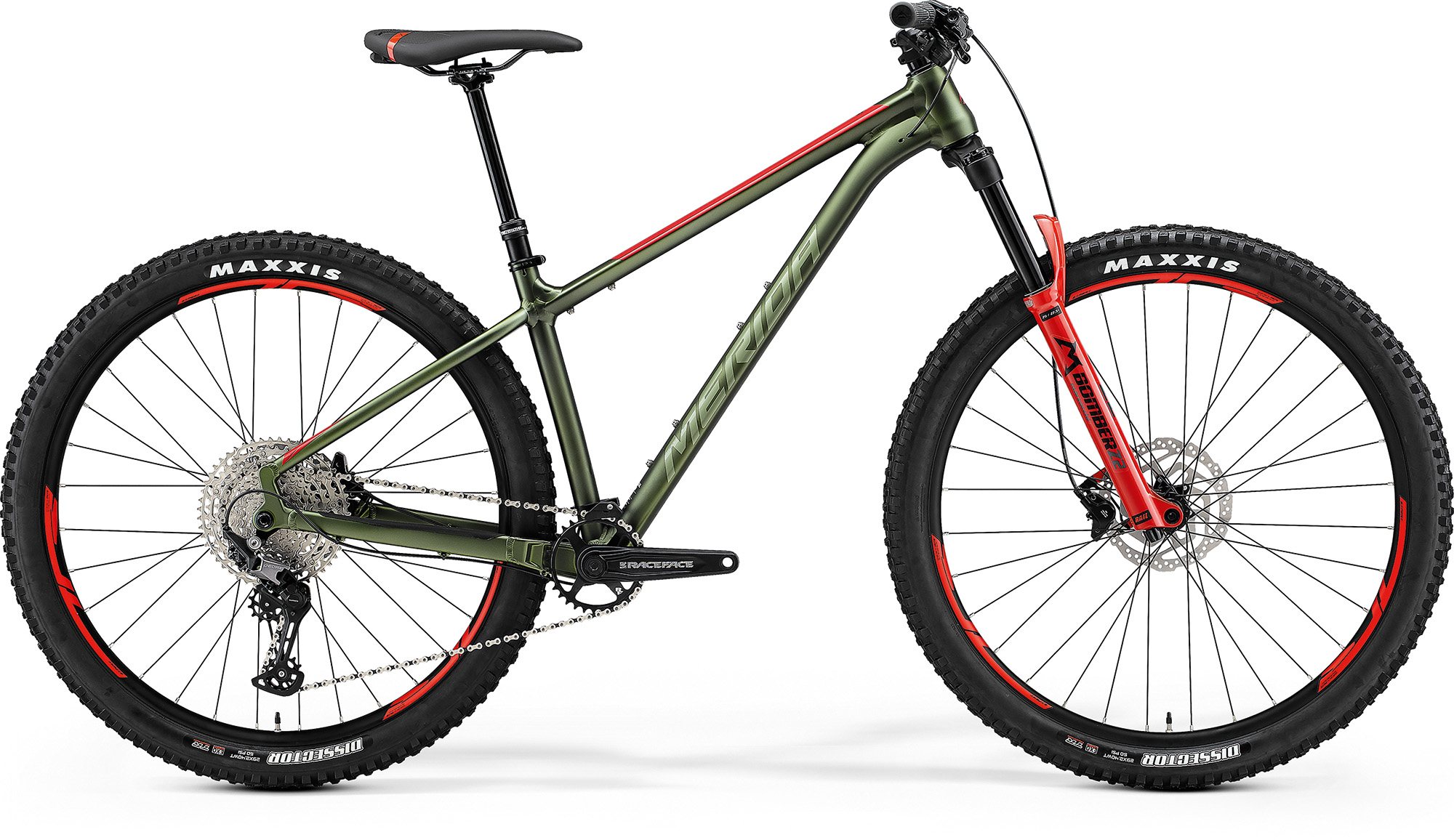 Merida are a brand mostly known for getting people into the sport with fantastic value for money bikes, and the Big Trail is no exception. Starting at just $1,199 and the top model is $2,299, so whether you are looking to dabble in MTB or are becoming a weekend warrior, the Big Trail has got you covered. The top model comes with Marzocchi Z2 (amazing fork), a deore 12 speed drivetrain, and a 150mm dropper post. The perfect budget componentry without going too cheap on the price. If you’re looking at getting into MTB or want to venture into the weird world of hardtails, the big trail is the way to go. [R]

Kona Cable Bay Adventure Park
Type to search or hit ESC to close
See all results
Loading Comments...
We use cookies to ensure that we give you the best experience on our website. If you continue to use this site we will assume that you are happy with it.OkPrivacy policy