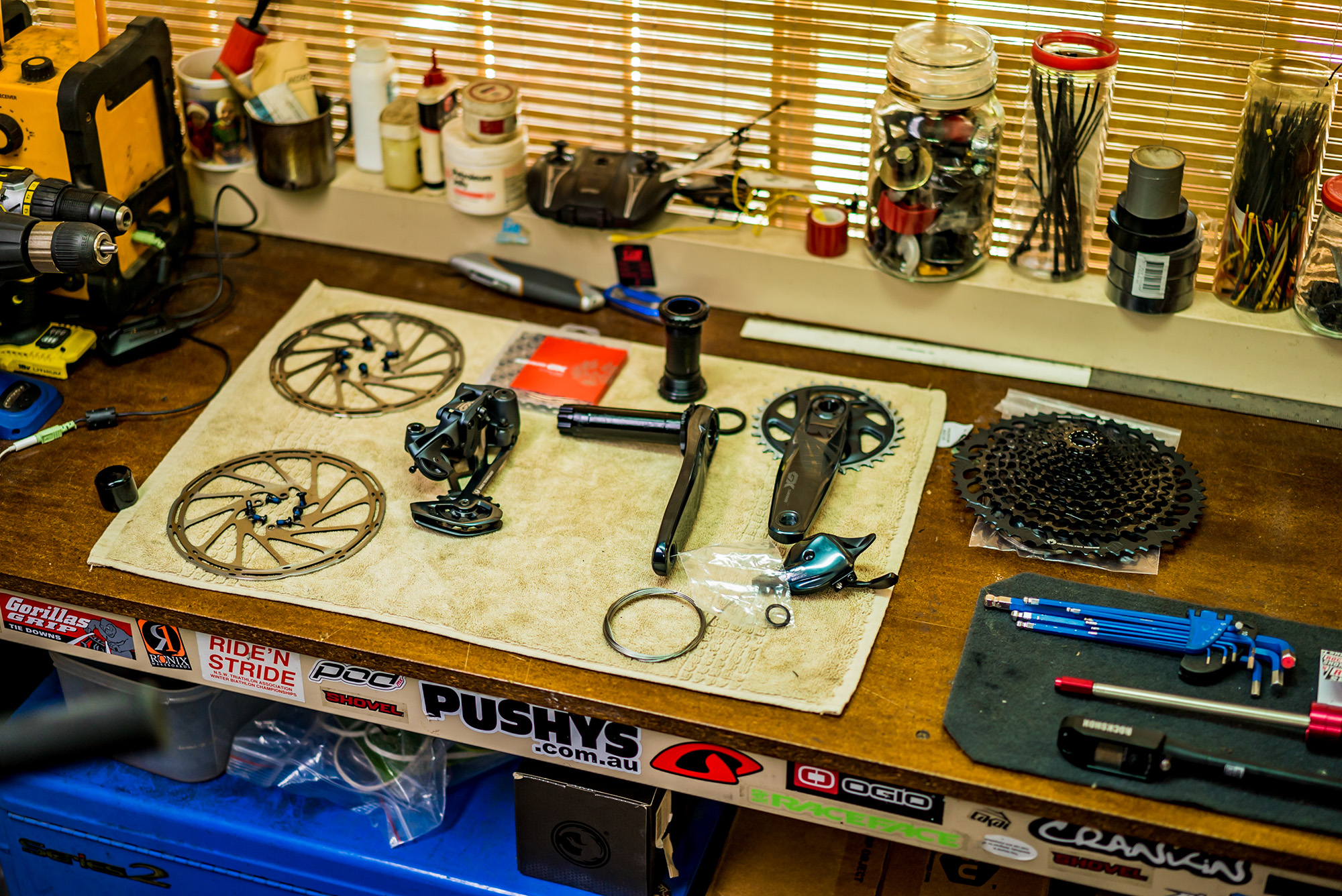 BREAKING NEWS: SRAM are coming to the party with 3 brand new mechanical 12-speed Eagle drivetrains including XX1, X01 and a seriously ‘baller on a budget’ GX entry level offering. Plus there’s even a new chain and cassette colourway option added into the range and stacks more. All up there is a TON of fresh components and tech specs to talk about with today’s new Eagle unveiling so let’s not f*k spiders and jump straight into it!

Coming in less than half the price of the XX1 Eagle mechanical drivetrain, the new GX Eagle offering packs an unbelievable punch.

SRAM’s product managers and engineering team spared no expense in terms of development time and resources in the quest to create the best performing mid-level drivetrain that the market has ever seen. Aesthetically each GX component in the new range looks a million bucks with that deep grey two-tone anodization colourway which the brand has named ‘Luna’. But as riders we all know that it doesn’t matter how good something looks if it doesn’t have the ride quality to match then it’s all over red rover. Luckily that is one area where the new GX group really comes out swinging for the rafters. In addition to the new mega cassette which we’ll talk more about shortly, the other area of the groupset that they focused a ton of energy was in redesigning the rear derailleur. It’s features a completely new cage design which claims to be far more robust than the previous version. Which is great news for riders because with all that added strength engineered into the new rear mech it means goodbye to those reliability issues that occasionally plagued late model GX drivetrains.

Value for money is what the new GX is all about. We’re talking $899.95 (Aussie RRP) for the entire set-up; rear mech, cassette, cranks, bottom bracket, chain and trigger shifter. And SRAM have also released something really cool that we haven’t seen in the GX line-up before which is the option of a carbon fiber crank upgrade which you can pick up for around an extra $250.  Okay so let’s take a closer look at each component starting with the most eye catching ‘big’ addition…

Now I know what you’re probably thinking, “SRAM have only popped out a 52tooth cassette just to one-up Shimano’s largest 51tooth offering”, however when we chatted directly with the product managers at SRAM via skype a few weeks back to get a run through of the design process that went into the new Eagle drivetrains they were adamant that the main reason they worked so hard to increase the ‘range’ of the 1by drivetrains was due to riders feedback.

“Riders from across the world have told us that original Eagle drivetrains have completely changed the way that they’ve been able to ride and the types of trails that they can now conquer. However since we first launched Eagle 4 years ago riders abilities have continued to grow, and so a lot of people started asking us for even more ‘range’ so that they could go out and tackle unimaginable trials and to have that mega ‘bail out gear’ to allow them to finish each ride. So, our engineer team dug in deep and we’re pretty stoked that we’ve managed to create a new Eagle system which increases the range by a further 20%, now giving riders a total of 520% of range each and every ride.”

The 12 chainrings which make up the new GX cassette are pinned together utilising high-strength stainless steel pins and an open internal design similar to the X-DOME cassette which you’ll find in SRAM top level cassettes. The steps between the cogs remains the same from the previous generation Eagle cassettes (10, 12, 14, 16, 18, 21, 24, 28, 32, 36, 42, 52) of course with the addition of the 52t replacing the 50t of old. 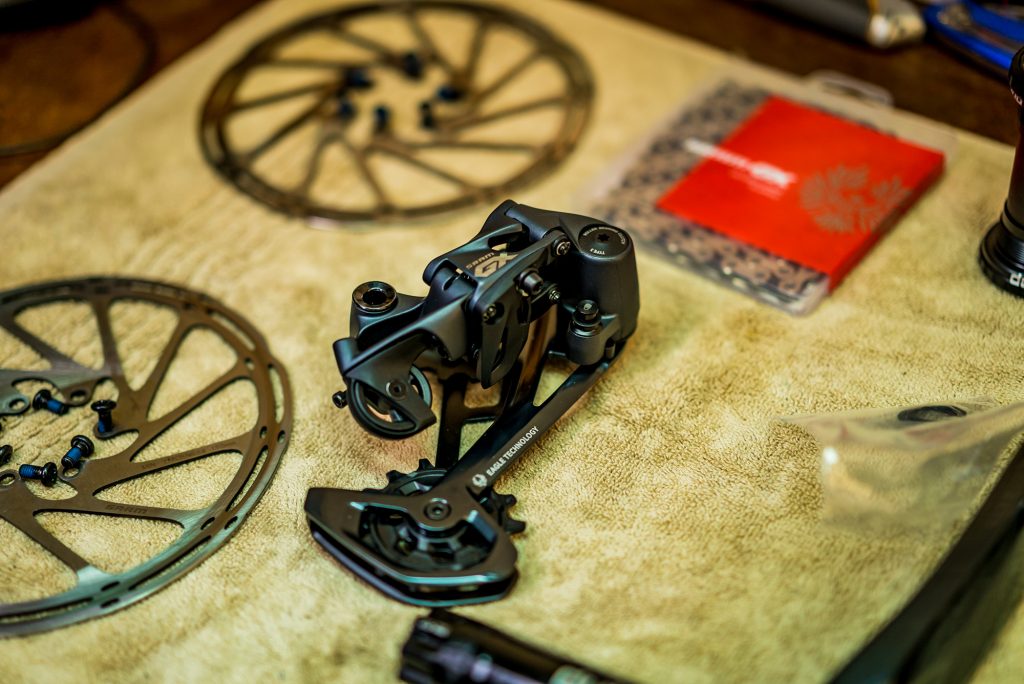 As we mentioned earlier, the new GX derailleur has been fully redesigned and it’s now a lot stronger but not a lot heavier. In fact the new rear mech is less than 10grams heavier than the model it replaces. Refined to work with the new 10-52t cassettes, the new rear mech is also backwards compatible for the 10-50t versions. However, of course, the old rear mech will not work with the new 10-52t cassette. 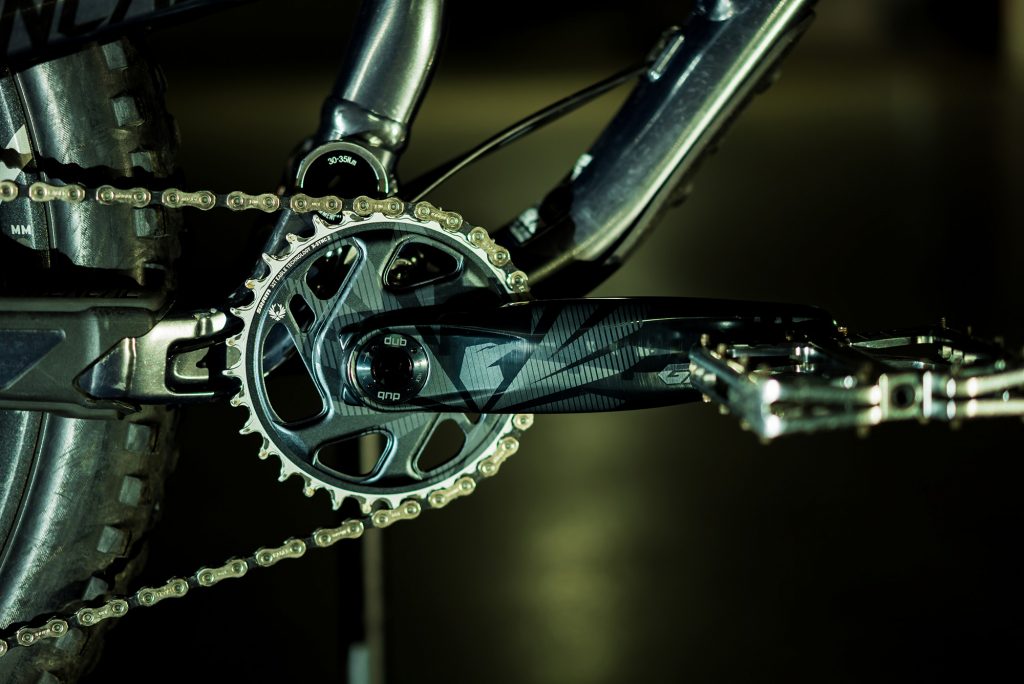 Yep, GX welcomes carbon fiber into the line-up for the first time in the shape of a new crankset featuring SRAM’s X-SYNC 2 tooth profile front chainring. Each tooth’s thickness is precisely toleranced and controlled to work seamlessly with the chain’s inner and outer links. BB wise the new system uses DUB technology for a better-engineered bottom bracket and a new spindle design. Together, these allow for a more uniform approach to bottom bracket fitment, better sealing against contamination and forward and backward compatibility.

SRAM are so confident in the new alloy GX cranks that they’re calling them the best aluminium crankset the brand has ever made. Just like the carbon version, the new alloy cranks also feature a X-SYNC 2 tooth profile chainring for complete chain control. Both versions of crank also share the DUB bottom bracket as well.

Not a huge amount of change here between the new and the old model. And the reason for that being, ‘if it aint broke don’t fix it’. SRAM already had their thumb actuated triggers absolutely dialled so they opted to focus their attention improving the performance of other components instead. That said, the new GX trigger features an alloy shifter paddle and of course it’s fully MatchMaker X compatible.

Oh, and SRAM are now also offering an e-Bike specific version which limited gear changes to one shift per click in order to put less stress through drivetrain via the motor when you’re bashing through the gears. 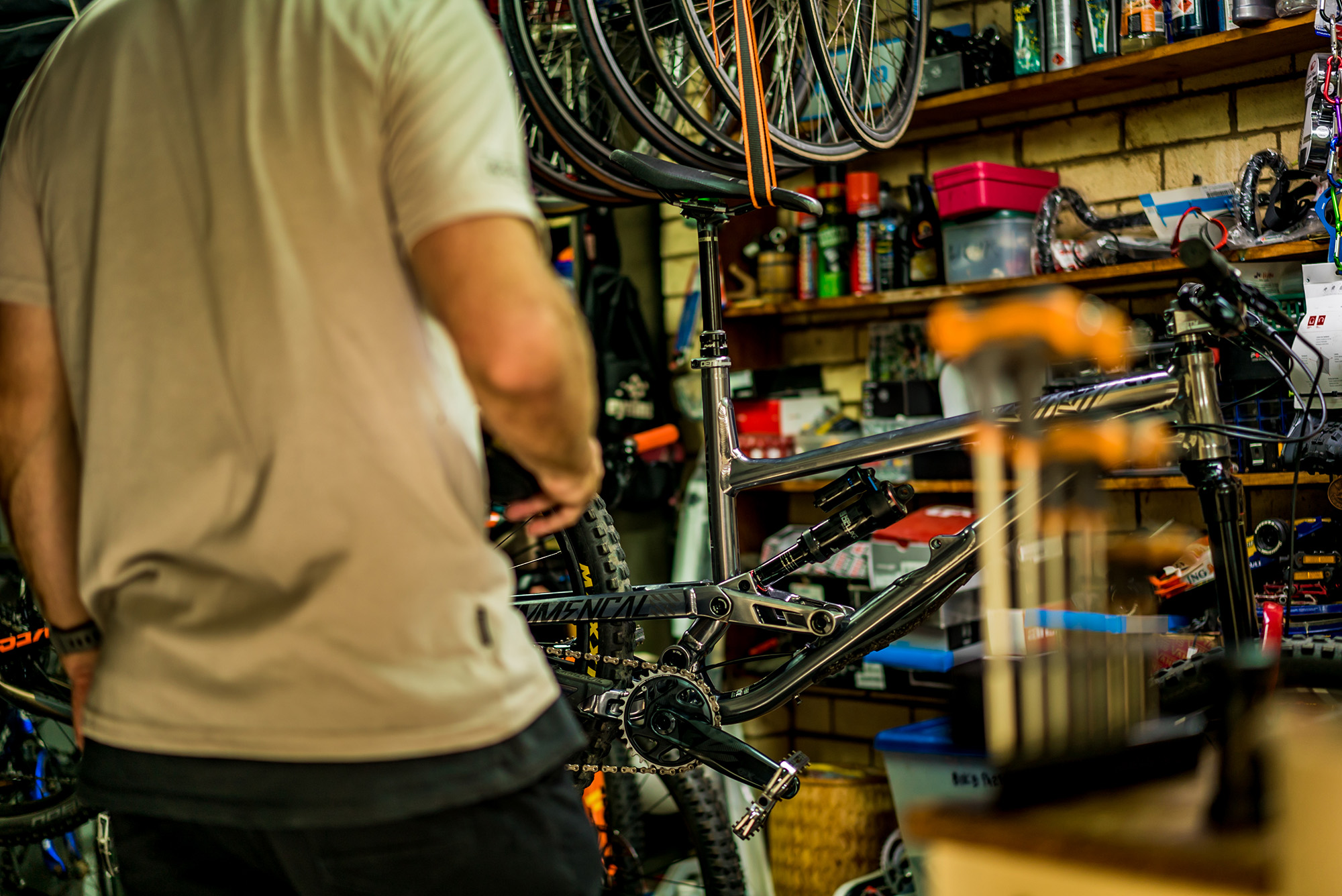 We were lucky enough to score a GX drivetrain several weeks ago and we’ve managed to rack up dozens of trail rides since fitting it to our [R]evo test rig.

If you yourself have spent any time riding one of SRAM’s current generation Eagle groupsets then you’ll know how accurate and crisp each gear shift is, how stiff and confident the cranks and bottom feel, how buttery smooth the chain glides through the system regardless of how much power you put through the cranks, and how you never need to worry about dropping the chain off that front ring, you’ll already have experienced all of those things, and to be absolutely honest this latest generation GX Eagle still shares all of those positive traits.

The main point of difference that you’ll notice, and it’s a rather BIG addition, is when you shift up into that mega 52 tooth. There is a noticeable, yet consistent, ‘delay’ in the extra time that it takes the chain to transition from the second largest ring (42t) up on the big sucker, which makes sense, and then when you arrive in the 52t gear you’ll likely be surprised just how easy that gearing is. 520% range from one end of the block to the other is a ridiculous amount of span, especially given it’s a single ring set-up.

Does all that range have a downside in terms of ‘feel’ or performance? Absolutely not.

Is that 52t ring going to be the difference between being able to pedal up that last big climb when you’re already fully gassed, versus having to get off and push? Absolutely. Does that alone make the latest generation of Eagle better than the version that it’s superseding? It sure does. We’ve ridden it and we love it.

So far we’ve only managed to get our hands on the new GX level groupset for some real world assessment, however we do know that as part of today’s announcement SRAM have also released a fresh versions of their 2 premium level Eagle drivetrains. Both groupsets are set to benefit from the new mega range 10-52 tooth cassette, albeit unlike the ‘pinned together’ GX version the XX1 and X01 cassettes receive the super sexy machined out construction method making them super lightweight and likewise super expensive ($769.95 for a cassette anyone?)

But, even with that price tag we’re positive riders will still flock to the new ultra Gucci cassettes in droves. And one of the reasons why we’re so confident of that is because SRAM have a brand new ‘copper’ colourway which is only available to the top of the line chain and cassette.

And don’t worry, those jaw dropping ‘rainbow’ and ‘gold’ colourways are rolling over into the new ranges also. Both of the XX1 and X01 are also receiving a new redesigned rear derailleur, in order to get that chain up onto the 52t top ring, but other than that the rest of the premium groupsets are remaining largely unchanged heading into the new season. [R]