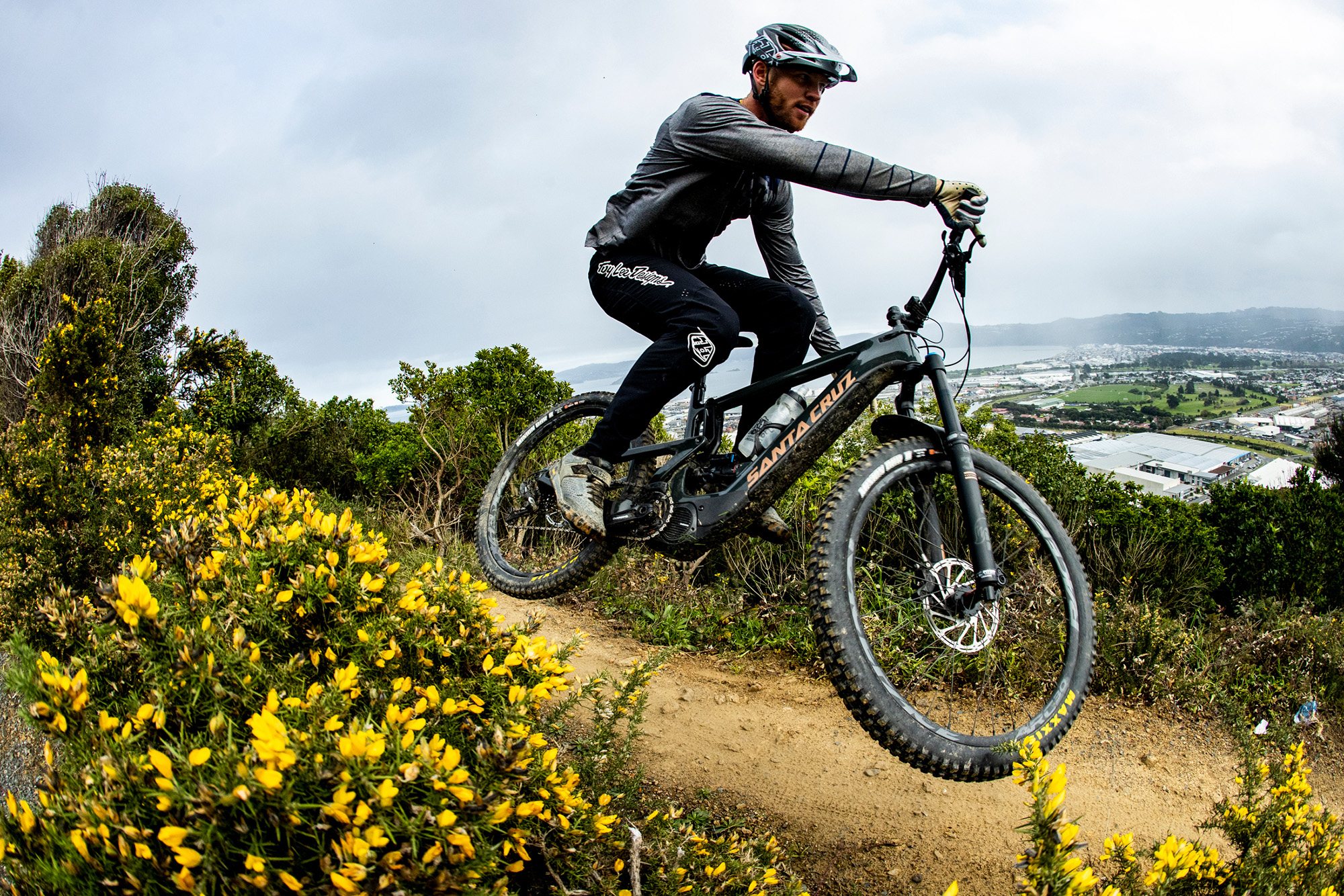 The Wellington Effect // An eBike experience with Cam Cole

In life there’s something to be said about taking the time to get to know things. Before I get too philosophical though, this tale is more about a couple of days riding with mates, showing them the sights and sounds of New Zealand’s capital city Wellington at the southern tip of New Zealand’s North Island.

I am by no means an expert on Wellington since I have lived here for just 5 years. There’s so much culture, art and outdoors to explore that I am still finding little gems tucked into all corners of the city. But more importantly in this instance as the local, I knew of some good mountain bike trails that start, finish or pass by the best coffee, Mexican, beer, Asian fusion, burger and sweet treat joins around the place. With Boaz (@b1gnugget) arriving from Christchurch and Sven (@svenmartinphoto) in tow arriving from Nelson, I found myself (@camcolemtb) tasked with being the default tour guide, which I happily obliged.

I had designed a hearty trip itinerary based out of the Brooklyn suburb just 4km from Wellington’s CBD. The idea was largely unproven prior to the trip but it had an urban meets back country theme about it. If there was ever a thing. With the Santa Cruz Heckler the bike of choice for the ride trip I was interested to see how the electric assisted bike would help us or hinder us in the pursuit of achieving the objectives across the two days. Since the lads had just arrived and were now under my supervision, I thought we could do with a pre ride briefing, so naturally I headed straight for the Aro Café. It was a wintry Wellington afternoon after all. All jokes aside (but once we had enjoyed a brew or two) we then headed on to our first trail, up the hill towards the Brooklyn Wind Turbine. 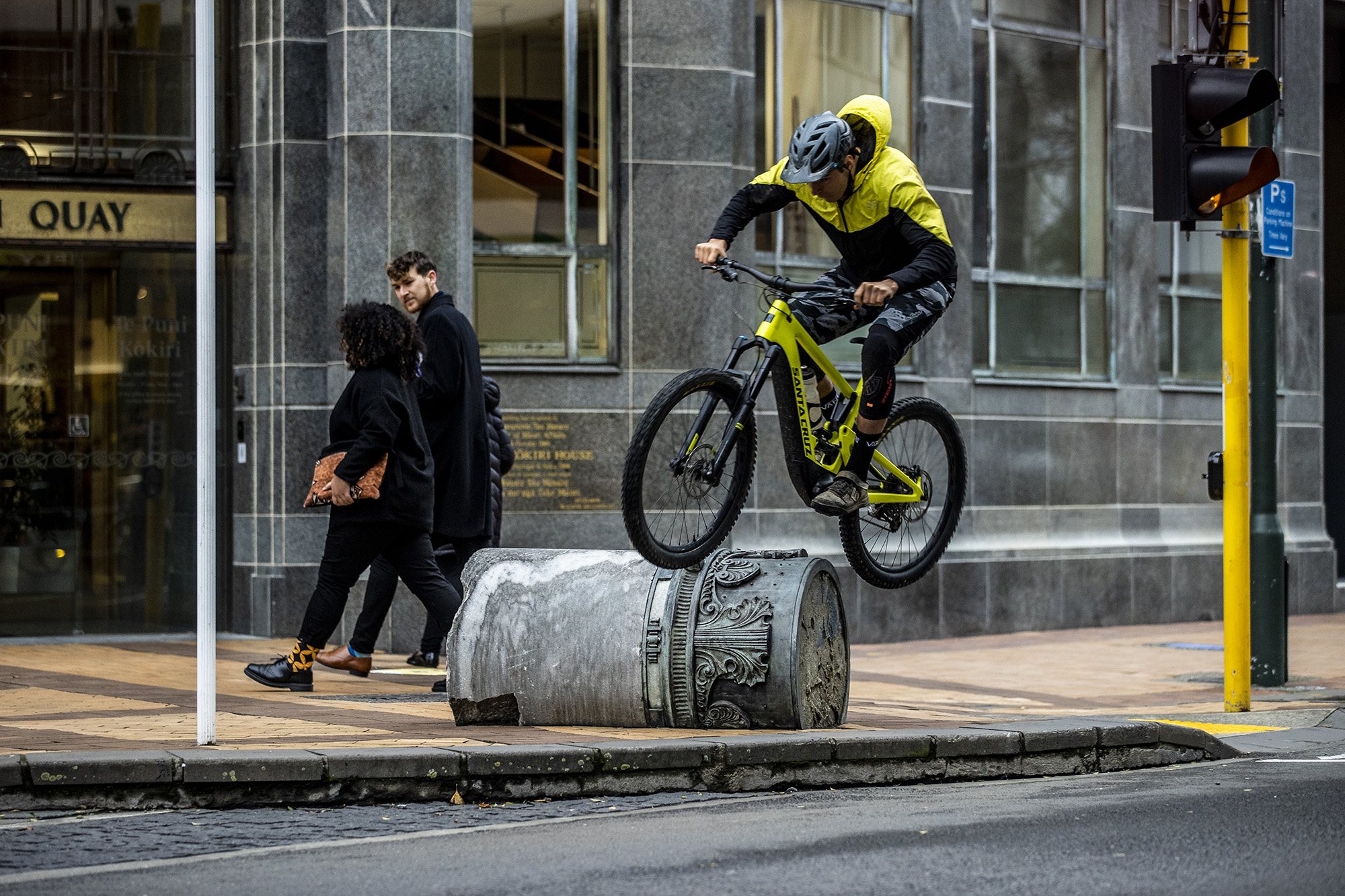 First up, a Bit About Myself

Before we get too immersed in the actual mountain biking part of this story let me tell you a bit about my travels around the world riding bikes and explain how I ended up living in Wellington. I moved to Wellington from Christchurch in late 2015. I spent 7 years living on the Port Hill’s, now synonymous with the Canterbury riding scene so that I could maximize my time spent during the off season in preparation for the UCI Downhill Mountain Bike World Cup. At the time it was the place to be for many of New Zealand’s top professional mountain bikers.

In the Kiwi wintertime I headed away overseas to compete for 4 – 5 months of each year spanning 2007 – 2014. During this time the racing took me to many of the world’s best outdoor adventure spots and cities. Places like Les Gets, New York, Maribor, Frankfurt, Denver, Bromont, Mont Sainte Anne, Bristol, Alp d’Huez, Edinburgh, Whistler and Canberra, among others. Traveling to these places through your twenties provides you some really good insights on what to look for when you are considering a place to live.

When I retired from professional racing in 2014, I went searching for the next thing to keep my competitive spirit engaged. I figured that heading back to school could allow me to develop a complementary skill set to those I had developed as a professional athlete. So, I enrolled in a university marketing and international business degree at Vic Uni Wellington. This required me to relocate to Wellington and since completing my studies I have chosen to stay.

The first time I really remember setting foot in Wellington was in 2004 some 12 years earlier. Of course, it was for a mountain bike race. I found the city difficult to navigate since there were many hills around obstructing obvious landmarks to gauge baring’s, the streets narrow aaaaaannd the racing was usually a roll of the dice to see who didn’t get a huge gust of wind during the race run that would blow you off the track. Now here I am showing a couple of mates around the city on a riding trip. 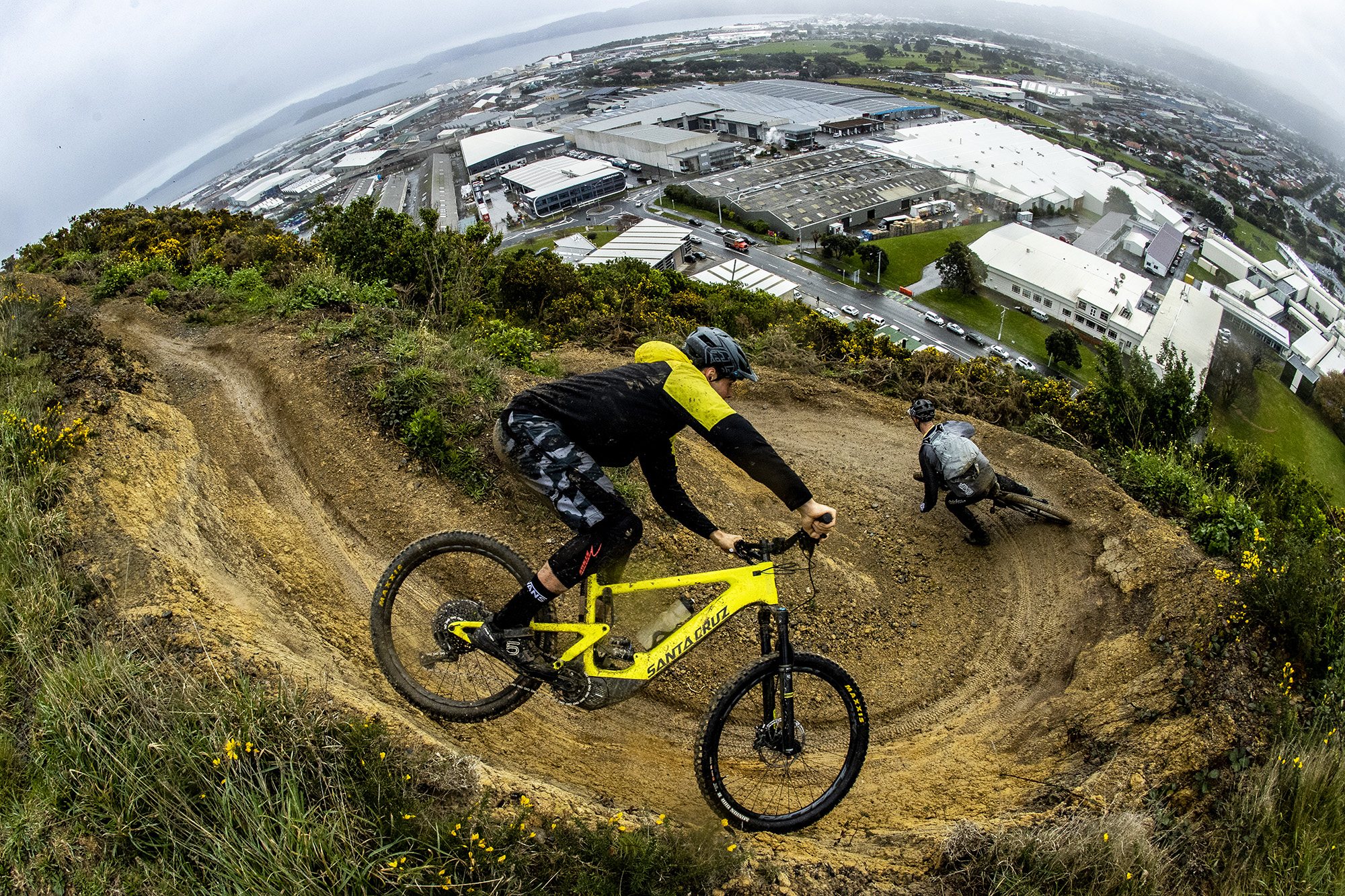 Once we departed the Aro Café we headed up hill towards the Brooklyn Wind Turbine on Transient which cuts up through pristine native bush just 3km from Lambton Quay, the heart of the Wellington CBD. A couple of additional link tracks later and we hit the Brooklyn Wind Turbine summit. The descending cloud, mist and rain intermittently closed off our uninterrupted view of the entire Wellington harbor, surrounding suburbs and even the South Island. This was not Welli on good day, but it added to the moody winter vibe. Since there wasn’t much to see other than a few lycra clad road going cyclists we continued to head almost directly south towards Owhiro Bay and Red Rocks. Car parts extension turns into Barking Emu and then the Red Rocks track takes you all the way down and out to the south coast.

This would usually be a weekend ride for me, but the e part of the heckler kept the trail flowing regardless of climbing single track or cruising the road back to Aro Valley. I could easily see that this loop could become a post work spin in summer or on those days that you find yourself with that extra bit of time in the afternoon. Usually by the time I hit the end of the Red Rocks coastal trail I find myself looking for the bronze coloured coffee cart that has so often saved me at the Red Rocks car park. But on a mid-week evening in this weather there’s not a sign of a barista or chocolate brownie in sight. Without the assistance of sugar and caffeine, we clicked up a few gears and time warped back to Aro Valley in boost mode on the Shimano power unit.

Before I knew it, we were sipping on Garage Project beer tasters while charging our batteries for the next day’s plan. 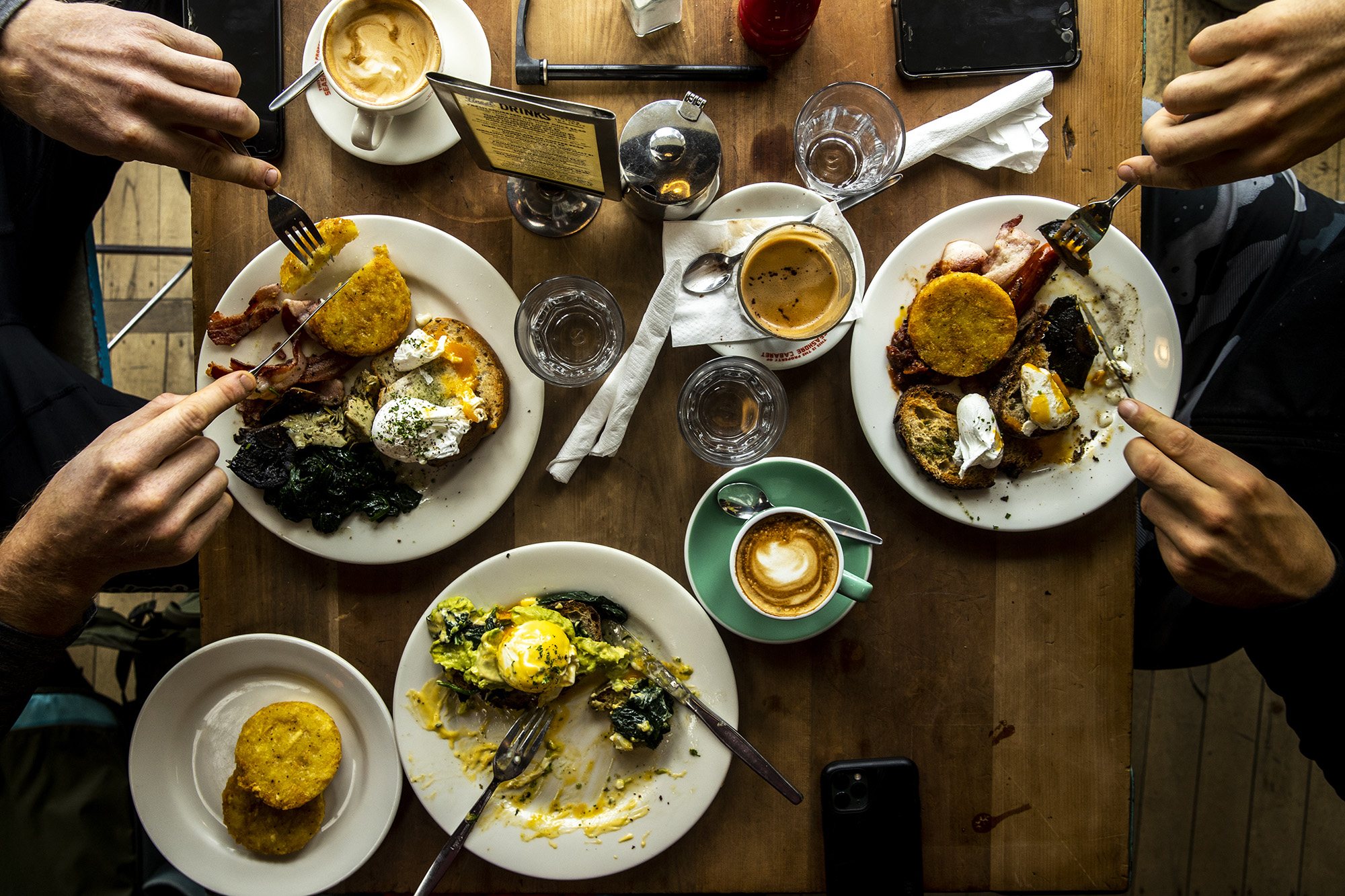 Beginning the day just a few days after the shortest day of the year meant the sun was rising at around 8am and sunsetting bang on 5pm. Attempting to mix a wide variety of trails with, urban commuting and typical day to day aspects of Welli lifestyle I was unsure on how the day would pan out. But as soon as we had consumed our first coffee of the day the tricks started flowing quickly. On the way to the train station we tested out the Hecklers front end grip with a couple of nose bonks and double checked our suspension balance with a couple of curb hucks to flat. With the goal of making it from Brooklyn to Mt Towai Peak we boarded the train with our bikes departing from Wellington Station, heading for Petone Station. Once we got off the train, we headed to the Petone Esplanade for a seaside cruise heading east towards Seaview but not before a leisurely breakfast and coffee due at Seashore Cabaret and some touristing on the Petone Warf.

It wasn’t long after finishing breakfast that we were approaching Mt Towai, when we hooked a left off the ridgeline and started our descent back towards Petone on Freewheel testing the Hecklers cornering abilities. A mixture of fast and slow corners gave way to jumps and steep chutes as we hit Super Plus and Chur-No-Bull spitting us out the bottom of the hill at speed. After a quick clean up thanks to a local garage we headed back towards Wellington CDB by train. While I was ordering lunch on the Wellington waterfront Sven and Boaz got distracted by a skater and BMXer sessioning some urban furniture and embankments. Boaz was pushing the Heckler into BMX style riding territory as he out tricked both the skater and BMXer on a wooden embankment.

The long climb back up to the Brooklyn Wind Turbine started with a debate as to what mode each of us was going to use. I suspect that both Sven and Boaz were bluffing when they said they were in what Shimano call ‘trail’ mode as I was already in trail mode and I could feel the muscles in my legs wince as they passed me with ease and hit the front of the group merging into single file. I was happy to sit back and receive somewhat of a draft as the pace increased due to the impending darkness. On the way up to the Wind Turbine we hit a sneaky lap of the recently rebuilt Roller Coaster jump trail. Boaz boosted on all the extra-large unintended gap lines with style as I mostly tried to keep things as low to the ground as possible. Sven got sick of Boaz trying to out tweak Iago Garay in front of his lens and packed up his gear leading the charge to the top of the hill before darkness completely took over. We had just enough light to drop into Car Parts which links into Ikigai. Exiting the trail, a hard right took us on to an access track across into the residential housing and my neighbourhood.

As my residence came into view Boaz celebrated his arrival by announcing that his battery had lost its last bar of power and switched automatically to eco mode. Seconds later mine did the same after almost 40km of riding and 9 hours of distraction’s and activities we had timed it to perfection.

Traversing Wellington in one day on the Santa Cruz Heckler cast a different kind of light on the city and surrounding trails for me. A city that I am becoming to know more and more as I spend more time here. The bikes allowed us to link riding locations together in a way that was fun and painless. By switching between eco, trail and boost we were able to keep the day flowing but also take in the sights and ride a selection of my favourite trails without having to load up a vehicle. We didn’t even rush to eat our breakfast and sat down for lunch as well. With the assistance of the Heckler we were able to keep the riding fun but introduce other layers and elements to our riding trip that blur the lines of what modern-day mountain biking has become. This bike provides a newfound freedom where weekend rides become day trips and day trips become sneaky commutes home from work and afternoon rides. 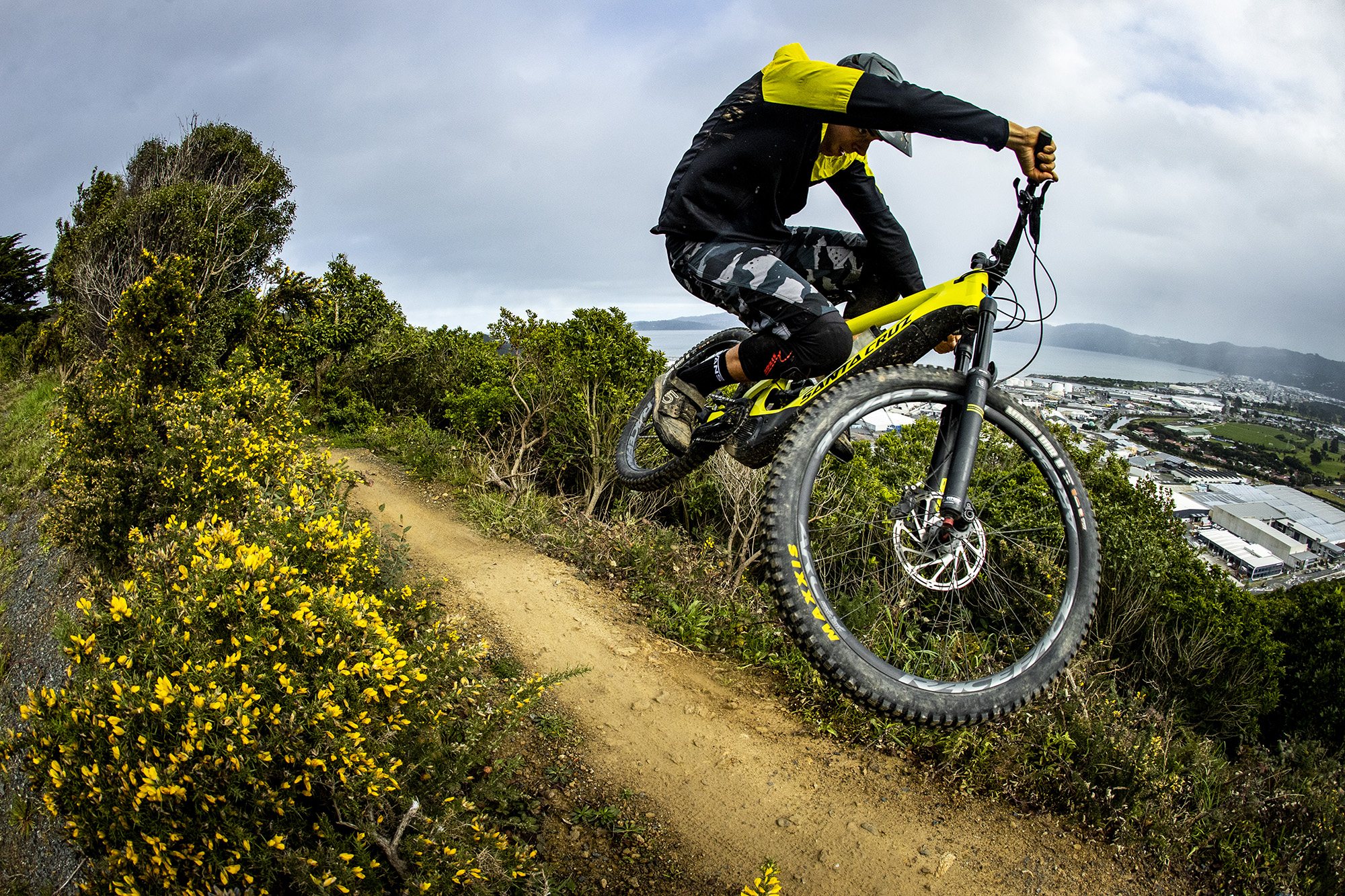 The proximity and variety of trails within easy distance of the City are what really sets Wellington apart for both myself and many a mountain biker alike. When you think of cycling friendly cities you don’t often associate a nation’s capital city where you can mix rubbing shoulders with ministers on the steps of parliament with quality mountain biking right on the doorstep of business, art, culture and an urban lifestyle. Living here allows you to study or develop a professional career without compromising your keenness to ride mountain bikes during lunch time, after work and on the weekends. Irrespective of the time of day rides almost always start or end at either a café or bar in the CBD with mates just a stone’s throw from quality trails and riding. [R]