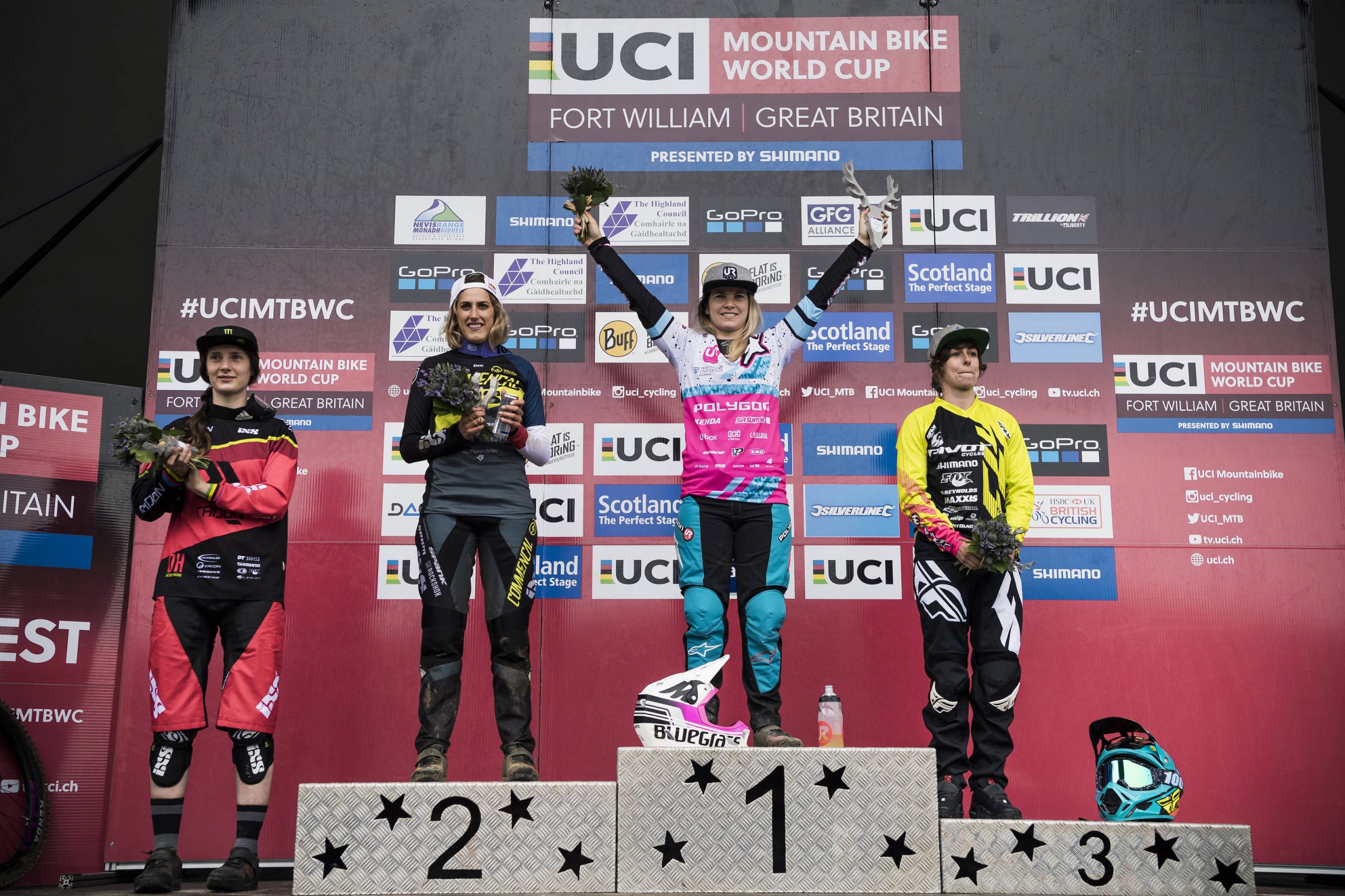 World Cup Downhill Stop 2 took place deep in the Scottish Highlands at the one and only Fort William. It’s famously unforgiving downhill course the battlefield for the 16th time.

Thousands of fans lined the track, regardless of the weather to witness the new guard of Australian MTB make their presence felt, with Tracey Hannah taking the top step and Jack Moir stamping his intentions on the season with a well earned second place behind the most winning dude in MTB, Greg Minnaar.

The grey strip that winds itself down the slopes of Aonach Mor, just outside the Highland town of Fort William, is one of MTB’s longest running and most established venues. Year after year, it produces classic racing which lives long in the memory.

Much like in Lourdes, weather threatened a repeat of Round 1’s torrential mud fest, but the sun broke through as finals started, and lets just say the track was brutal in sections, as long as its ever been and the riding nothing short of incredible..

Watch the highlights from Scotland

In the women’s race, the drama got underway before the racing had even begun. Rachel Atherton, undefeated in 14 races, crashed in practice and dislocated her shoulder. Despite putting it back in herself on the side of the track, the Briton was on her way to the local hospital to be evaluated. The Champ was out, her reign of 14 uninterrupted UCI World Cup wins was over and a place on the top step was up for grabs.

The newly revised woods section was chewed up and rutted almost beyond recognition after repeated rain showers and busy practice and qualifying sessions. Getting through it in one piece and still pointing in the right direction was potentially going to make or break everyone’s race.

Switzerland’s Emilie Siegenthaler was one of the first big names to really lay down a solid run but was dislodged by French woman Myriam Nicole who was looking good to claim her second ever UCI World Cup win. That was right up until Hannah took to the track.

Tracey Hannah was up to pace from the outset riding full gas through the fast upper reaches of the course, clearing the gloopy woods with the aid of a few foot dabs and railing fast into the final jumps. With the noisy crowd behind her all the way, Hannah dropped into Fort William’s famous finish arena an unbelievable 10 seconds clear of Nicole to take a monumental and well deserved victory.

With the World Championships visiting her home town of Cairns later in the year, Hannah is looking to be getting into the form of her life, we’re so stoked to see her back on top!

“It is unbelievable. I never came to Fort William expecting to beat the British riders as they are amazing on every track but especially this one. Obviously I feel for Rachel being out. I just put everything out of my mind, and did the best run that I could do. It was hard and I wanted to stop pedalling but I just had to keep pushing.” Tracey Hannah 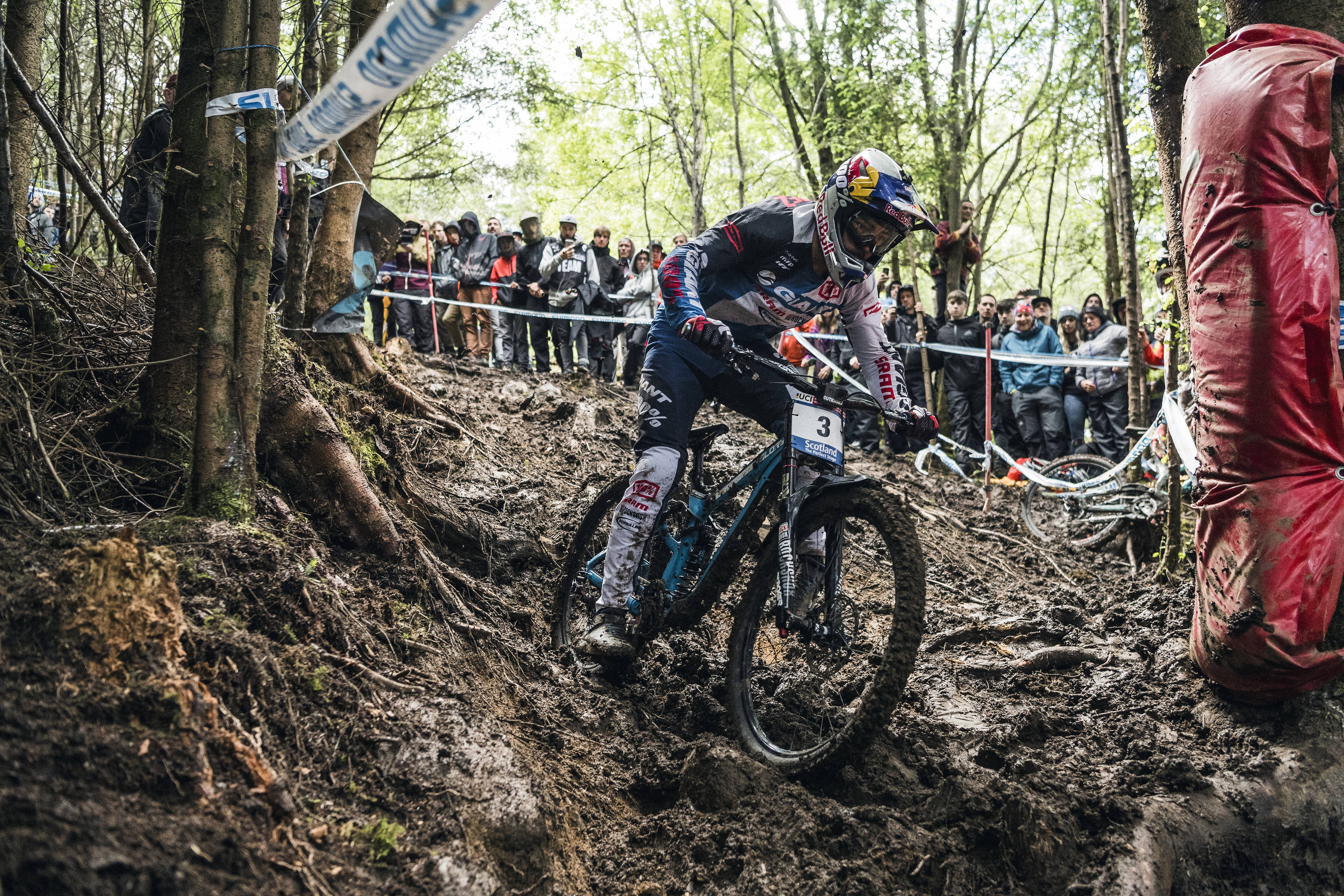 The big guns were on fire, with so many riders keen to erase Round Ones misfortunes. Although the woods and subsequent mud would prove to be a problem for many, almost un-nerving to watch riders get off to tackle it…

Connor Fearon looked in dominating form up top, carrying corner speed like no one can, but failed to follow up lower down the course. Fellow South Aussie, Troy Brosnan dropped into what would be a blinding run to take the hot seat from the ‘local’ Laurie Greenland. A swathe of potential World Cup winners then failed to better Brosnan’s time until the big wheels got rolling and Rémi Thirion stepped it up a gear, keeping it clean and fast in the woods and gaining speed late in his run to push Troy back into second place.

Focus then turned to reigning world champion Danny Hart. After a scorching upper section, a crash in the woods led to the end of Hart’s challenge and any hope of placing.

Next to launch an offensive was Aaron Gwin, and the 2016 World Cup series winner was off to a flying start. A huge lead at the first two splits was then followed by Gwin spinning out in a turn, losing momentum and most of his lead. The American picked things back up down the ‘Motorway’ section though to somehow take pole position from Thirion.

Colombia’s Marcelo Gutierrez looked in with a shout and had Gwin in his sights, but crossed the line a tantalising 0.6 seconds back of the American, the look on Aaron’s face was priceless… 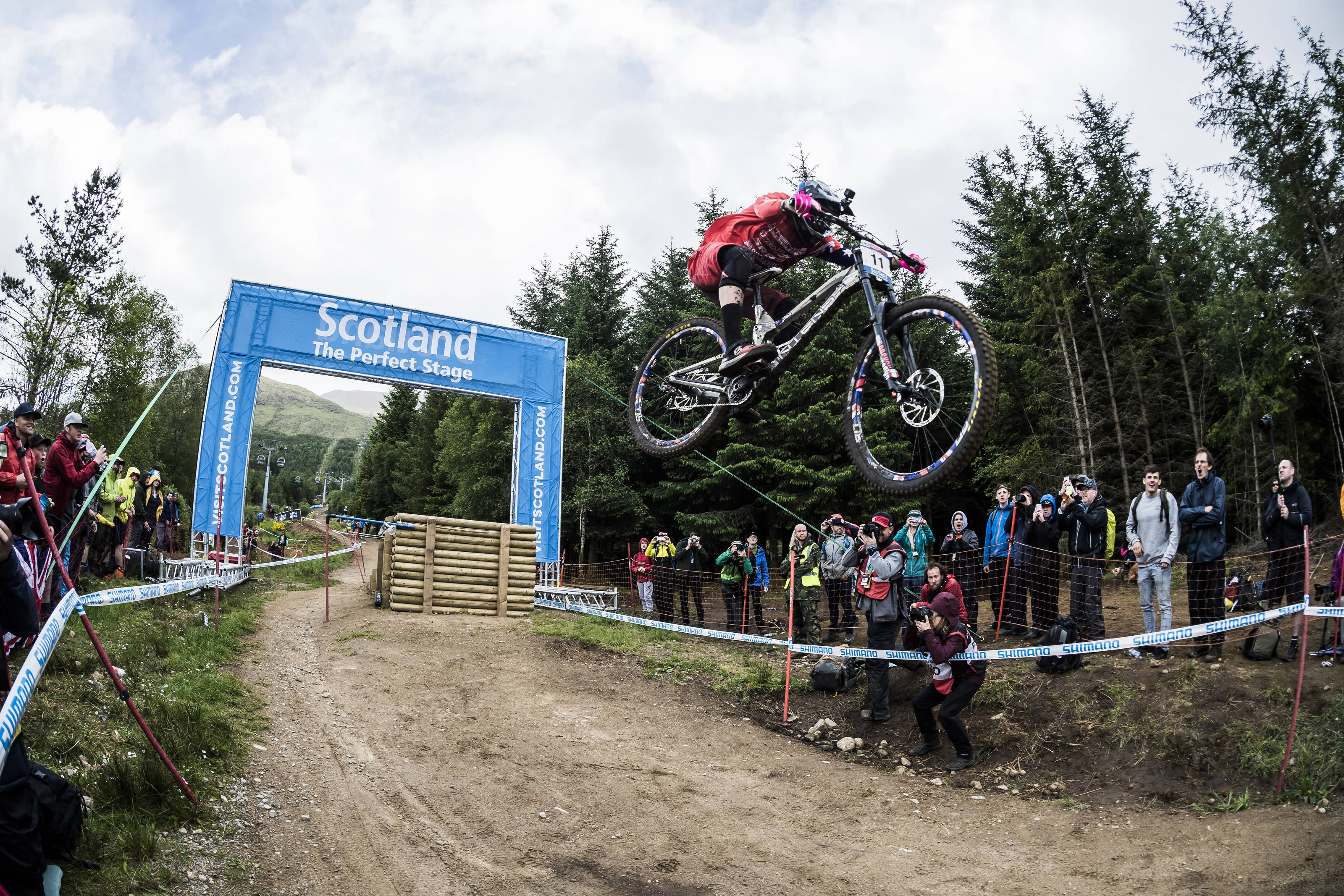 And then it was three, only the 29ers of Jack Moir, Loris Vergier and Greg Minnaar to go. And here’s where it got wild. Moir managed to back up his sensational qualifier to oust Gwin from the hot seat, a result celebrated like a World Championship win by Moir’s Intense team and crew as his best ever result was guaranteed, first or second. Vergier crashed out, leaving Greg Minnaar to battle the rain that had finally moved in.

The tall South African Greg Minnaar had won five of the last 10 races on the iconic hillside and wasn’t about to shy from adding another. He danced his way across the exposed rocks of the top section and nailed the woods. When he crossed the line he had gone 2.979 seconds faster than Moir and was duly mobbed by his team and adoring fans. It was to be his seventh victory in Scotland, we guess making him the first to win World Cup DH events on 26, 27.5 and 29 inch wheels…

“I didn’t think luck was on my side today as it started raining quite hard at the top. I tried to ride hard knowing the track was pretty wet. This was the toughest one for sure, I worked hard for this one.” Greg Minnaar

Full results can be found here.

The season continues at the third round in Leogang, Austria next weekend 11th June.

Thanks to www.redbullcontentpool.com for photos and video!