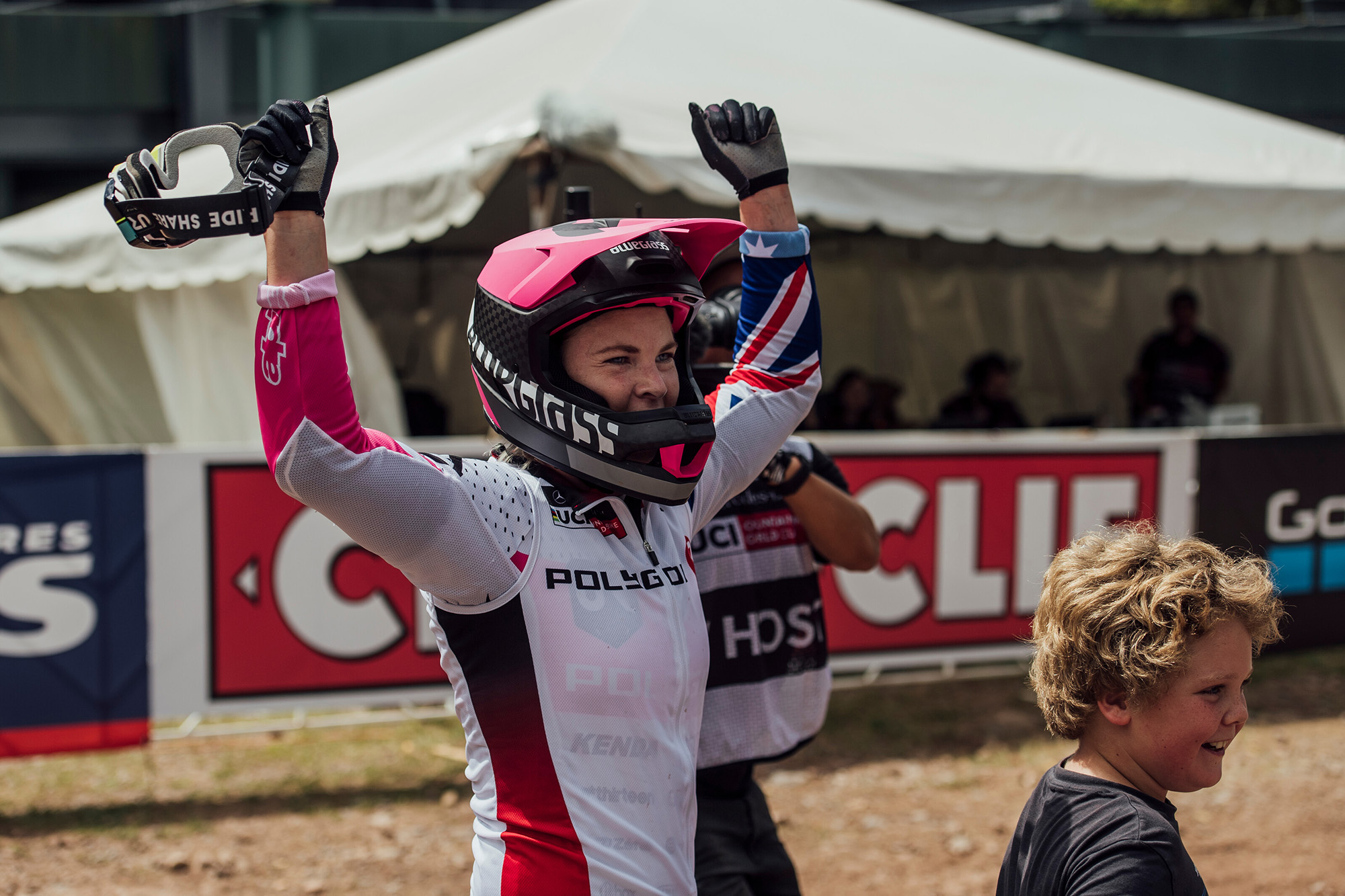 The 2019 UCI World Cup Downhill season finished with one of the most intense last rounds we’ve ever seen. And this was across both the premier classes!

You couldn’t have scripted for a more nail-biting finish! Australia’s Tracey Hannah and France’s Loïc Bruni took wins in their respective elite class overall title races at a dramatic final round of the Mercedes-Benz UCI World Cup in Snowshoe, West Virginia.

In the women’s downhill, Hannah entered West Virginia with a narrow lead over Marine Cabirou and needed a sixth-place finish or better to secure the overall title. Downhill heavyweights Tahnée Seagrave and Myriam Nicole reemerged from injury adding to the title pressure. Seagrave had crashed in the previous days qualifying session and started further down the order only to ride herself straight into the hot seat. Both Myriam Nicole and Veronika Widmann managed to best that time and the stage was set for the two title protagonists. Cabirou in a flawless run, rode gaps and lines which none of the other riders even attempted, taking the lead with a time of 03:43:032.

Hannah started so fast, hitting lines and some jumps not attempted in practice saw her up at the first three splits, you could just feel the tension mounting, would she crash? Would she just blow everyone away? Once into the woods and the rock gardens she backed off, slowly dropping back positions, and coming into the final section it was going to be so close. Would playing it safe lose her the overall? I’m sure it was incredibly well planned and executed, as she slotted into fifth place, and after years of battling taking her overall crown by one position, making history in the process as the first Australian woman to do so. So many years of hard work, defeats, the world championships in Cairns that was two years of dedication to end up just seconds from victory, time away from MTB, to take the overall brings nothing but joy for us here and we cant even begin to imagine how Tracey feels today! Just as amazing was to see Mick Hannah in her corner, towing her in during practice over jumps she hand’t made yet, helping her with line choice and there at the finish, first to congratulate her. His 25th place finish even with a chain off and sui’ over the finish drop testament to his never ending determination and hard work. Dare say we were as proud as their family was being trackside!

“It’s super hard having someone has fast as Marine being able to have a little less pressure than me. I have to hold back from what I want to ride knowing that I have to think about the bigger picture. I know if I was in her position I would have a lot of fun racing and going for it. I just learned so much about mental and preparing for races and accepting not being able to win every race you go in. It’s been pretty hard. No wonder not many people win the overall because it’s pretty hard.”

Dean Lucas and Connor Fearon both blazed their way down the hill securing 10th and 15th respectively in a solid end to their racing for 2019. Jackson Frew made a statement to with a 28th place.

In a race which had previously been about tenths of a second, Pierron crossed the line with a clear five-second lead. Troy Brosnan absolutely sent it down the unforgiving track, holding speed in crucial section, but just falling short come the end.

Bruni played it safe slotting him third place, the minimum requirement for him to take the overall, unless Pierron scored maximum points. But the result for the day and the season was far from over.  Danny Hart took to the track with blistering fast run crossing the line with a time 0.656 seconds faster than Pierron’s with a time of 3:03:627, denying the Frenchman of maximum points handing the title to the now fourth-placed Bruni, with the American Charlie Harrison, third. Gotta say we were exhausted by the end!

“Winning here is I think the last thing, the only thing I wanted so bad after the World’s, it was like a life goal, it’s so good and I can’t believe it.”

So, is there anything Loic Bruni can’t win? He now joins the illustrious group of MTB royalty, including Sam Hill and Nico Vouilloz in winning the World Champion and World Cup Overall in the same year club. Simply incredible riding. Equally as inspiring has been Troy Brosnan’s season, which while not taking the top step, finished in second place overall thanks to possibly the most precise riding ever witnessed on a bike, race in, race out. It can’t be too long till Troy takes the top step!

While we’re bumming that the WC DH season is done for now, that means that our local racing season is underway and should be a banger. Get stoked for next year and go race some club events and inspire the next gen if Australian champions!

Watch the winning runs below