It’s Wednesday and we’re still spinning over the craziness that went down in Leogang early Monday morning.

Snowstorms surrounding the starting gate, axle-deep mud, slippery AF roots and rocks with sections that broke over half of the field and made two champions on the day. Camille Balanche from Switzerland and Reece Wilson from the UK became the UCI Mountain Bike Downhill World Champions of 2020. Both very well deserved victories in conditions that will go down as possibly the gnarliest ever.Leogang has been on the World Cup calendar since 2010 and has a long history of great results and memorable moments. At times the track has been described as too manicured, but that was far from the case on the final day of the 2020 Mercedes-Benz UCI Mountain Bike World Championships. The brand new ‘enchanted forest’ section, mixed with heavy rain, made for one of the most challenging World Championships we have ever seen. And that led to some brutal downhill racing that was unpredictable at times and totally mad at others. 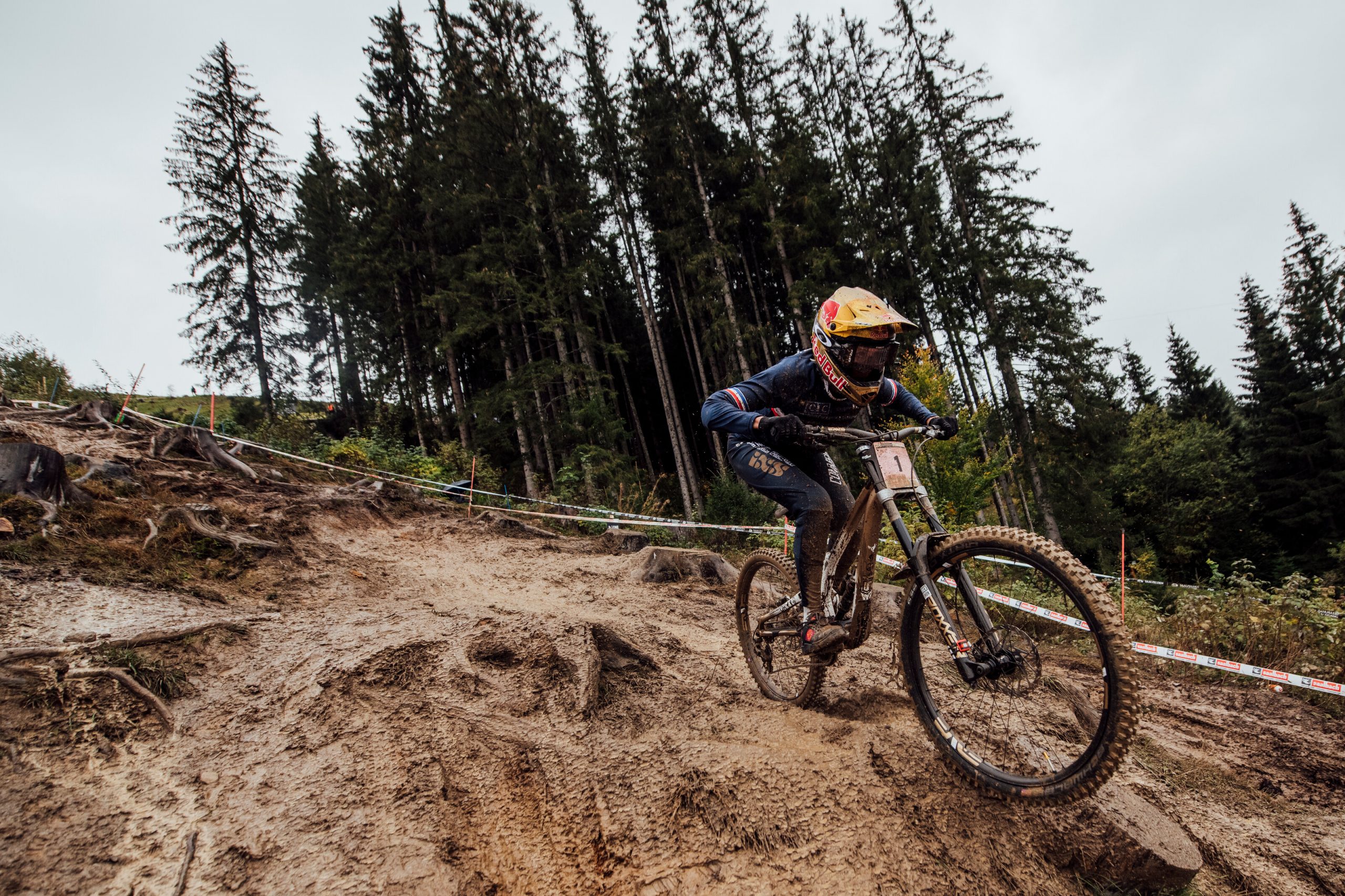 Thankfully it wasn’t snowing but the first elite women down the mountain were barely able to ride. The woods were absolute carnage, with bikes and bodies strewn across the near-impossible cambers.

Mikaya Parton of Great Britain made the best of the conditions in the early stages. The third rider to leave the holding hut, she remained in contention for victory until the run of the defending World Champion, Myriam Nicole.

Nicole was visibly quicker, holding the higher lines and carrying speed where those before her had slid and stalled. It wasn’t a faultless run – one of those wasn’t going to exist today – but despite a crash, she took the lead. The next big threat was Britain’s Tahnee Seagrave. Returning to racing after an ankle injury, she fell at an awkward point in the woods and tumbled down the steep track. Clambering back up the slick slope cost a huge amount of time and her medal hopes were gone.

Slovenia’s Monika Hrastnik looked pretty tidy on course and slotted into second behind Nicole, but there were still some big names to come. One of those names, unfortunately, wasn’t Valentina Höll. The Austrian superstar, who had qualified fastest in her first Elite World Championships, sustained an ankle fracture and ligament damage during her practice run in the morning and sadly couldn’t go for gold on her home track.

Camille Balanche was fourth last to start. A World Cup podium finisher but not one of the hot favourites, the Swiss rider performed a super smooth run. Riding the line between control, confidence and commitment, the split times were nail-bitingly close but she made the most of the final section to take the lead.

Marine Caribou and Tracey Hannah could still deny Balanche victory, but both produced mistakes and saw their chances disappear.

A huge smile spread across the face of Balanche who became Switzerland’s first-ever gold medal winner in downhill. Nicole had to settle for silver and Hrastnik took bronze. 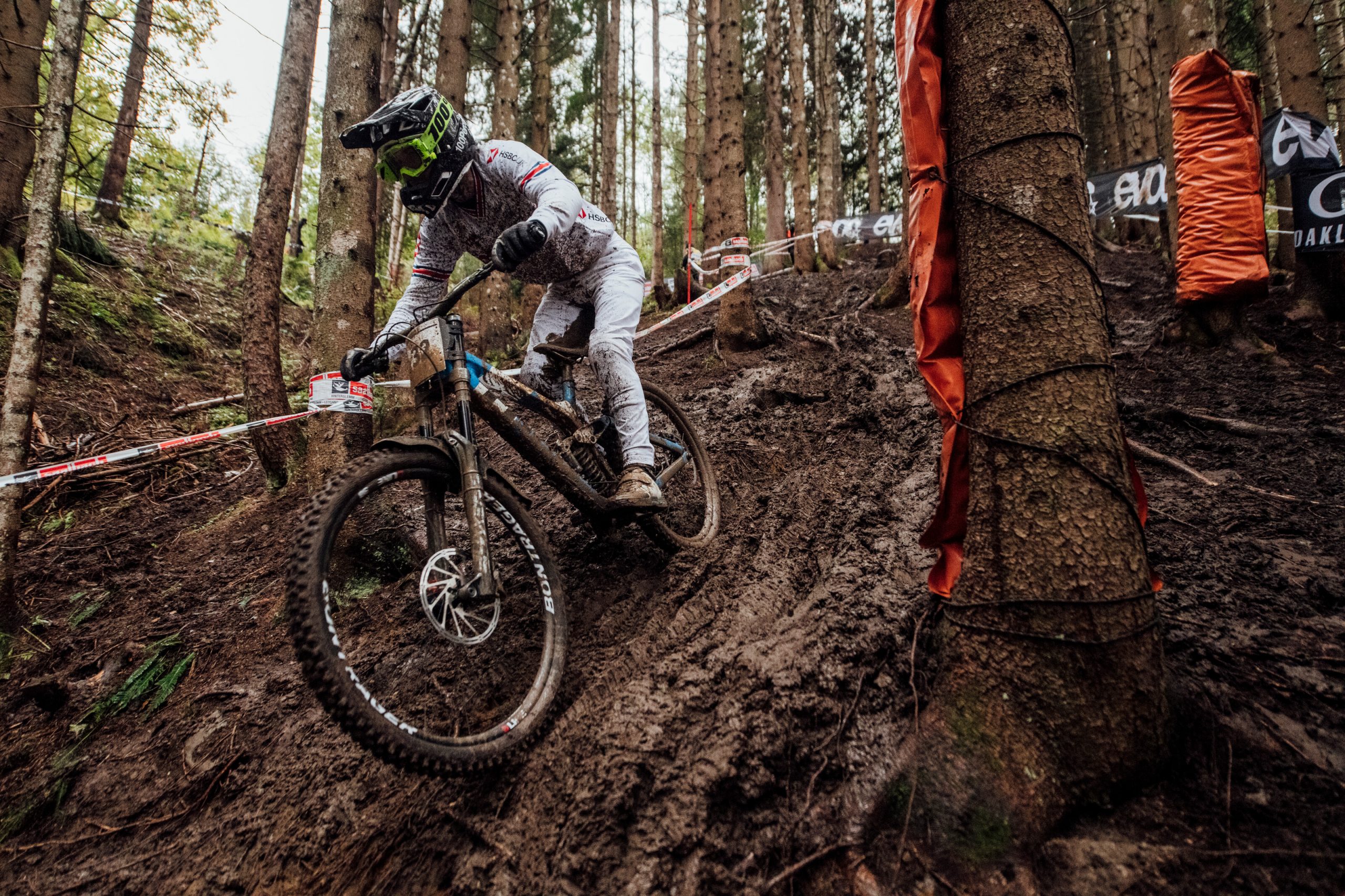 At the top of the mountain the snow had arrived. Though thankfully it wasn’t settling as the first riders launched out of the gate. Heaters were placed in the warm up area and start hut, and warm-up balm was seen being applied to riders’ hands.

Laying down an early marker was Enduro World Series rider, Pedro Burns, while fellow Enduro rider Jack Moir also impressed and showed that he hasn’t lost much speed on the big rig.

Not long after Moir it was Reece Wilson who set the time to beat. And as each rider ended their run, the Brit became increasingly aware that he had set a pretty special marker.

It wasn’t a case of pin-point precision and perfect execution, but rather a matter of simply staying on the bike. Wilson had looked fast and about as accurate as you could expect from conditions that were causing crashes and carnage for the very best riders in the world, including Finn Iles, Luca Shaw, Brook MacDonald, Loris Vergier and Laurie Greenland.

One rider who didn’t fall foul of the mud monster was Austria’s very own David Trummer. The home favourite put the pressure on the time of Wilson, but ultimately just fell short.

The big names kept coming but the split times kept turning red. Soon, Wilson was guaranteed a medal, then so too was Trummer, and then we had just one man left to go. Loic Bruni, the defending champion, is a man who knows how to pull it all together for a World Championship run, but this course was his undoing.

You can watch the full replay on Red Bull TV: https://win.gs/3nqzhwv

“Probably the craziest conditions I have ever raced. Snow out of the start gate and super sticky mud down the bottom.”