If the name doesn’t sound all that familiar we don’t blame you, although it is interesting to note Kellys Bikes are one of Europe’s leading bike brands who have been producing  an innovative range of bikes for well over two decades. Only recently have we seen Kellys here on our shore with a range now available through Ride Sports Australia. The Noid is Kellys ‘no holds bared’ DH platform and if you follow the World Cup circuit you’ll no doubt have noticed their Factory Pro Team blazing past your eyes on RedBull TV.

The Noid features a custom alloy frame, 27.5” wheels and 205mm or rear travel which is coupled with a set of 200mm forks. The Noid is offered in 2 spec levels; the top of the line model is known as the ’90’ and a mid-level version called the ’70’. Both models share the same frame. The bike is available in 2 frame sizes; medium and large. Here at [R]evolution we’ve been trail testing the Noid 70 for the past couple of months and there’s been plenty about the bike that has kept us grinning after every day of bombing DH runs. So, without further ado, lets get into the review.

Okay then, tell us everything we need to know about this rather exotic European DH machine?

While adjustable geometry is nothing new on premium level mountain bikes these days the Kellys ‘Vario Geometry System’ does offer a very simple and very user friendly solution for changing plenty of aspects of this bike. We’re talking a choice of 2 position adjustable dropouts which you can swap between in a matter of minutes via 4 countersunk bolts. As well as a 2-position flip chip style adjuster within the front shock mount arms that will alter your head tube angle, seat tube angle & bottom bracket height. The combination of these two adjustments means you can find your sweet spot for your own bike, not just what designers & engineers think will satisfy most people. Because everybody loves options and being able to fine tune a bike’s set-up and handling to suit your riding style and taste is always a bonus.

The construction of the alloy is great with solid looking welds throughout and cleverly placed gusseting and bracing which is going to help a lot in terms of the bike’s longevity. The linkage system itself does lead to a somewhat flexy feeling back end. Once used to it compared to my own bike, I quite liked it. The back wheel tracks through things smoothly, instead of pinging off everything it touches. This feeling doesn’t inspire confidence in everyone though.

Keeping in mind that our Noid 70 test bike comes in just under the 5k mark ($4999) give us a run-down of the component spec?

The component selection does seem like a bit of a mixed bag on this bike however it does work together quite nicely when you’re pinning down a trail. If anything it shows that Kellys clearly put a lot of thought into what they spec their bikes with, which is always a good thing for a brand. RockShox are looking after the suspension with a Boxxer RC coil & Super Deluxe coil in the back. Shimano have a hold on the braking & drive train with a Zee group, 203mm rotors & small block cassette garnished with an upper chain guide & bash guard. Race Face Respond alloy bar, Chester seatpost & Half Nelson grips are a nice touch, Kellys home brand KLS wheels, saddle & stem round out the rest of the spec with some chunky Schwalbe Magic Mary.

How does that funky looking suspension linkage all work?

Yep, the Noid does have quite a unique appearance. Kellys have utilized a  suspension system known as the “Think Link” is described as having similar kinematics to a virtual pivot point system. This means you will feel minimal feedback through your drivetrain, which with modern clutch style derailleurs can take away from the supple beginning of your suspension stroke. It will also not be affected by brake jack, meaning you can brake later and harder into the corners should you have to without your suspension squatting, loosing that precious traction we all strive for. 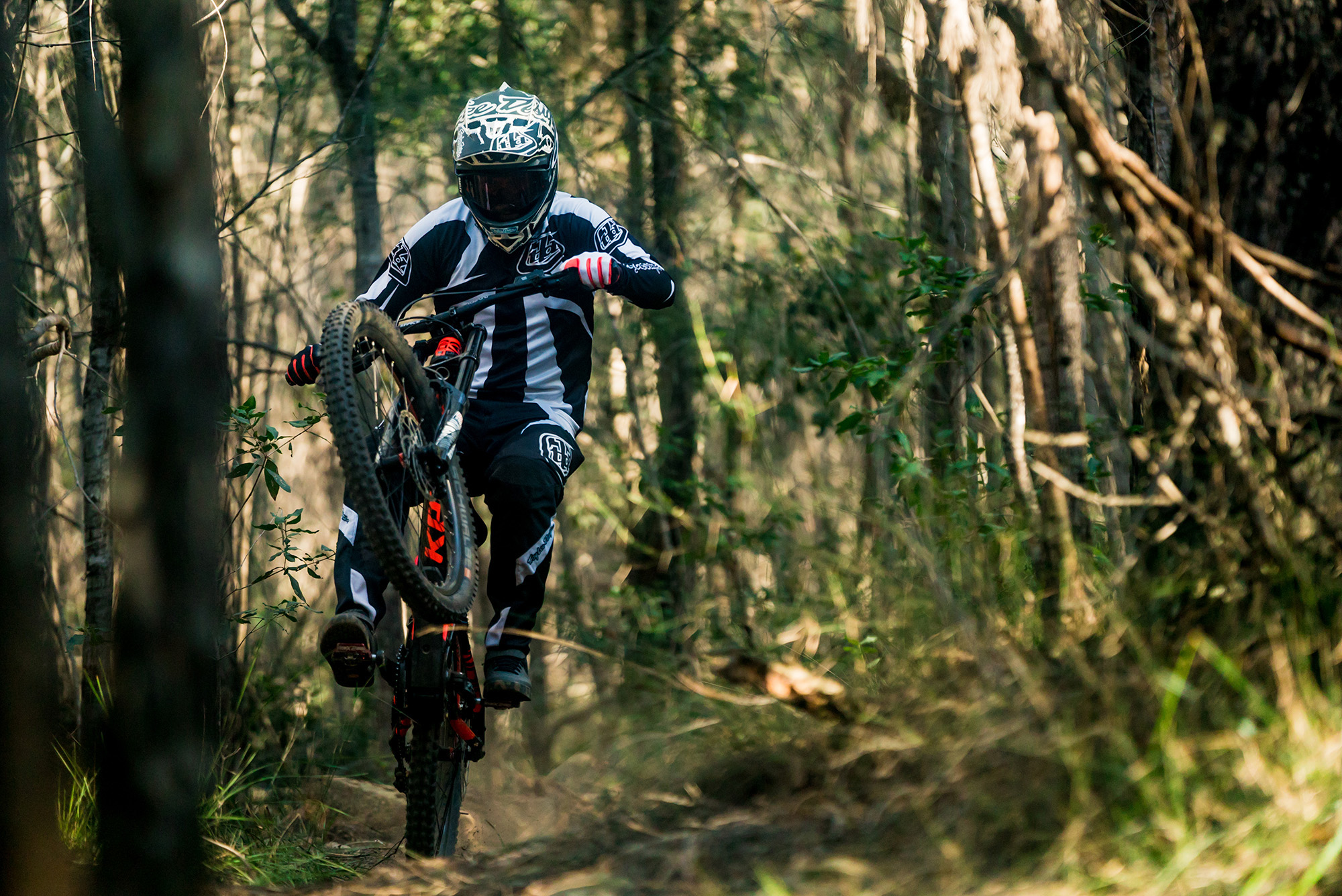 So how does all that affect the way the bike handles when you point it down a steep trail?

The bike’s kinematics will give you an incredibly supple beginning to the suspension stroke & fantastic traction over small bump sections of trail. The flip side to these good characteristics are the feelings of pedal-bob & pedalling inefficiency, this is a big mountain race machine though after all, realistically there are limited places in Aus where these bikes are constantly faster than the modern day enduro bike. But if you’ve made it this far through the article then you are just like me and still appreciate the feelings you can only achieve on a fully-fledged downhill bike.

Kellys are now offering the Noid 90 with 29” wheels which is due to arrive in Australia later this year – how would we expect this bike to ride with those bigger hoops?

When 27.5 first started becoming mainstream for DH it was pretty solidified in the enduro/trail bike world. However the difference on a downhill bike was much more noticeable. This is the same turning it up to 29!  Without having ridden the Noid in 29” form I can’t say for sure, but I’ve owned my own M29 for nearly 12 months & the only way  I can try to explain it is a combination between terrifying in the best way & a monster truck. 29er DH bikes will very likely redefine what you consider to feel fast & smooth.

“Describing the difference between 29 V 27.5 characteristics for downhill bikes is tricky.”

All in all, we found the Kellys Noid 70 to be a lot of fun. Sure, it might not “feel” quite as fast in comparison to some of the uber lush, super expensive carbon DH bikes, but we get the feeling that is not what Kellys were going for. It is confidence inspiring & very nimble. If you get a funny feeling in your stomach when you think about the fact that it doesn’t pedal great, then a downhill bike probably isn’t for you anyway and you’re probably stoked on your enduro bike which is awesome! But I know there are more people like me that are never going to give up on downhill in Australia and this bike could be worth your attention.

For more information about the latest Kellys range check out: www.kellysbikes.com.au