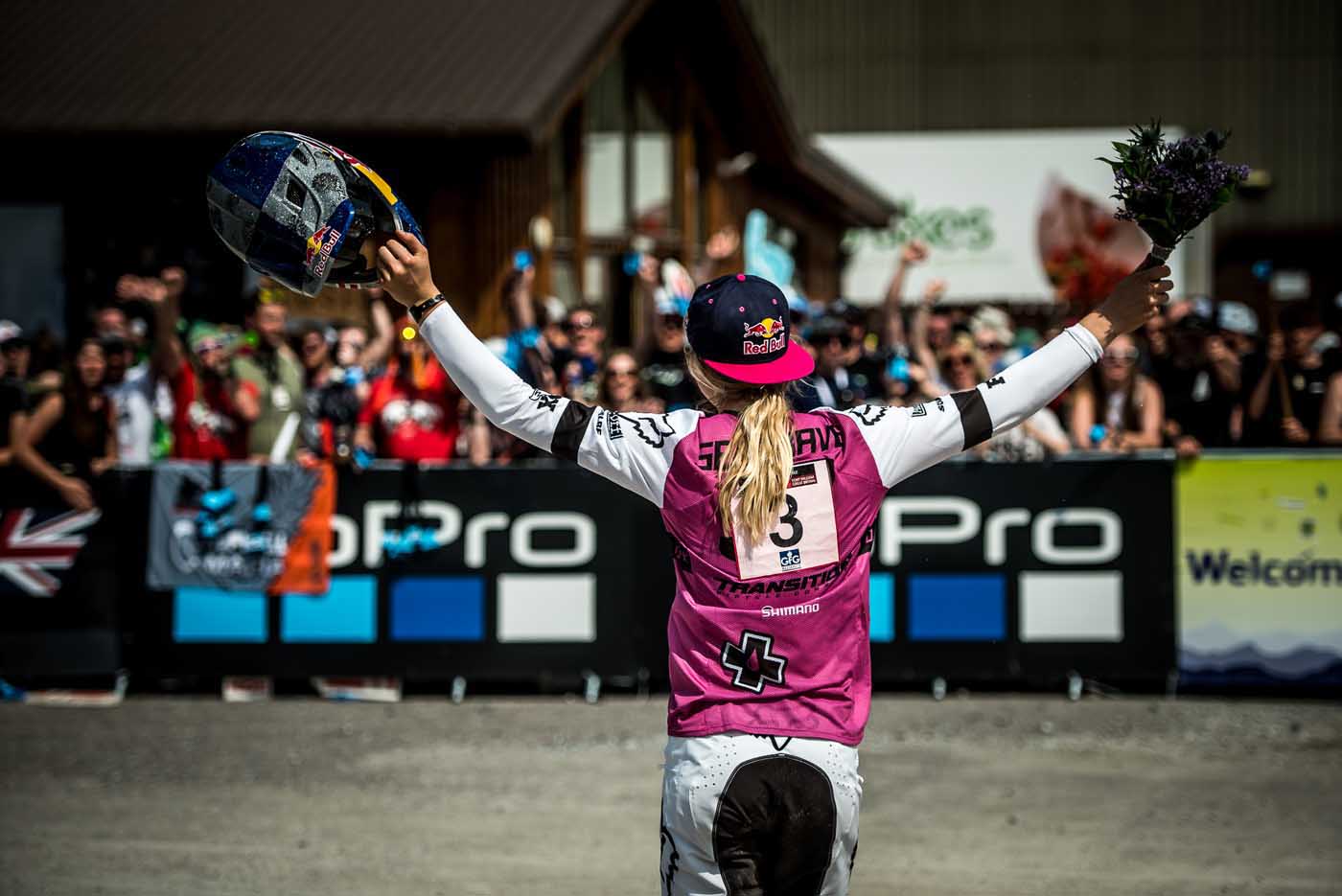 The Scottish round of the downhill World Cup gave us everything a race should offer bar an Aussie on the top step.

The sun greeted the world’s downhill elite as racing got underway at Round 2 of the Mercedes Benz UCI DH World Cup in Fort William, though overnight rain had threatened to change track conditions considerably for the riders. Thankfully, the longest course in this years series continued to dry out under the Scottish sun, and the scene was set for an afternoon of drama on the slopes of Aonach Mòr.

After a brutal few days of practice and qualifying that saw Dean Lucas and Greg Minnaar bow out of contention, it was clear that the rocks of Fort Bill were going to take their toll. With Connor Fearon and Troy Brosnan in the top ten for Sundays race, the stage was set for some epic racing.

Come Sunday, there was an unfamiliar name on top of the leader board as the Men’s race entered it final stages. Reece Wilson, started some way down the field but produced the run of his life to sit in the hot seat for seemingly ever. The Scot knew exactly where to find time on a track that he’s very familiar with, having raced both British and Scottish races on the legendary track.

Many a big name rider followed, but none were unable to unseat him. Loïc Bruni, racing in his first World Cup of the season, looked to be closing on Wilson’s time, but time slipped away as he made it down the track. The Frenchman did temporarily slot into second place however.

All eyes on the course then turned to current World Cup points leader, Aaron Gwin. All was going well, with Gwin looking super smooth on the top section of the course. He was up on Wilson’s time, but then disaster struck, as he went down in the new Liberty Boneyard rock section. The American crashed over the ‘bars, but appeared uninjured and remounted quickly. His moment had gone however, and just maybe Wilson was beginning to dream of a miraculous World Cup win. 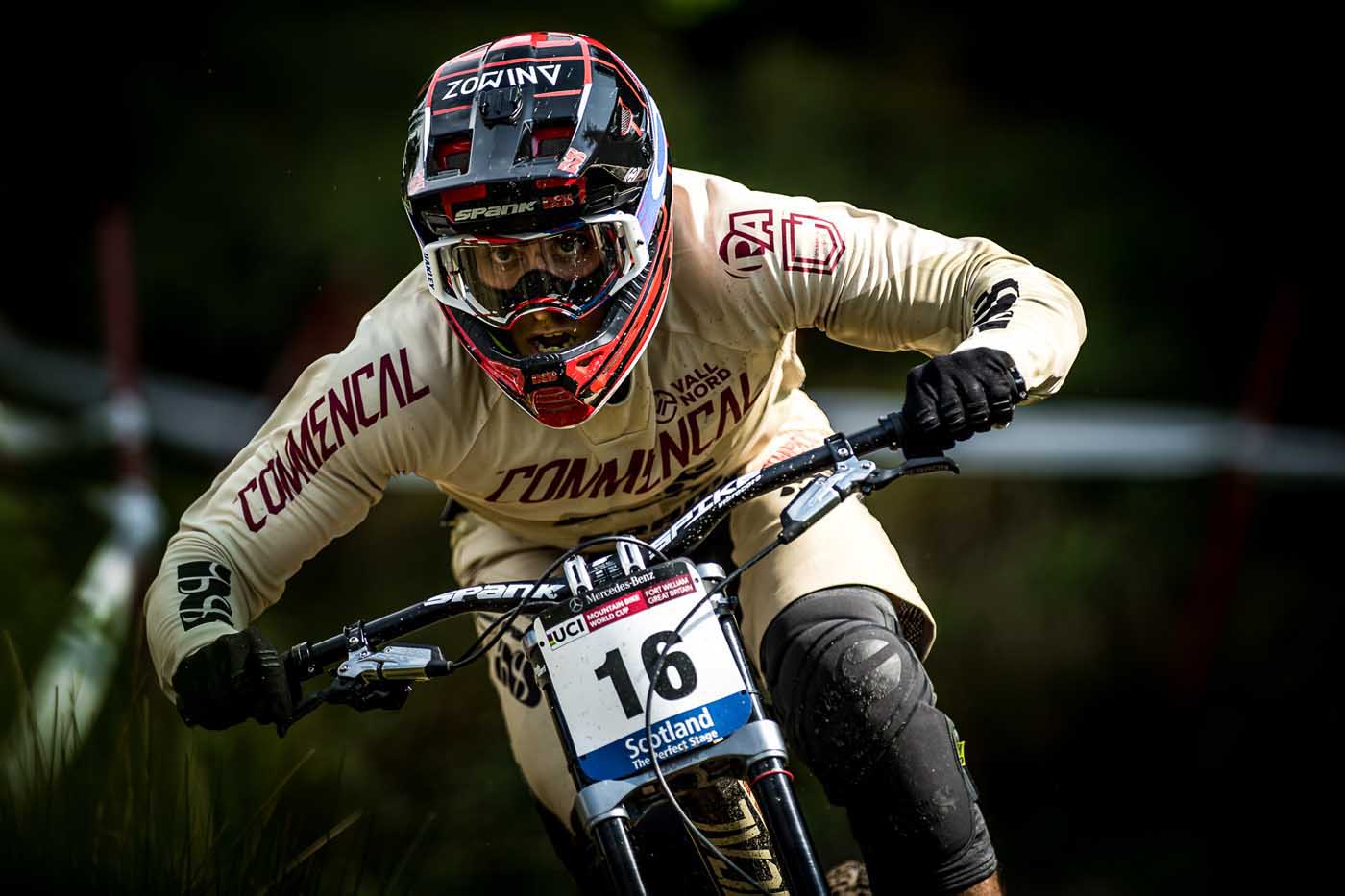 There were some big names still to come though. Amaury Pierron, on his Commencal Supreme DH 29er, set a scorching pace out on the course.

The Frenchman made no mistakes during a smooth and stable run, carrying his speed right down to the finish, pedalling like there was no to tomorrow. As he came across the finish line, Pierron had bettered Wilson’s time by over a second.

Troy Brosnan rode the wheels of his Canyon, and looked in with a chance of beating Pierron’s time, but couldn’t quite make up the time in the end, we’re talking sweet FA of a second……. There were just three riders left in the start hut now: Loris Vergier, Danny Hart and Luca Shaw.

Vergier, like Brosnan, had Pierron’s time within his grasp halfway down the hill, but a small mistake in the Liberty Boneyard, where he put his foot down on the rocks, was costly and he agonisingly finished just 0.311 seconds outside of his fellow Frenchman’s time.

Britain’s main hope Hart took to the track next, but was unable to make an impression on the leading times. This just left Luca Shaw, who, like his Santa Cruz Syndicate team-mate Vergier, was riding the all-new Santa Cruz V10 29er. Shaw had been super fast all weekend, topping qualification, and when the American was up on Pierron’s time at the first split by just under two seconds, it seemed we were in for a special run. It wasn’t to be however. A flat tyre shortly after ended his hopes and gave Pierron his first World Cup win.

The French also celebrated having three of their number in the top five, with Vergier finishing second and Bruni fifth. Wilson finished fourth after all his efforts, with Brosnan third. 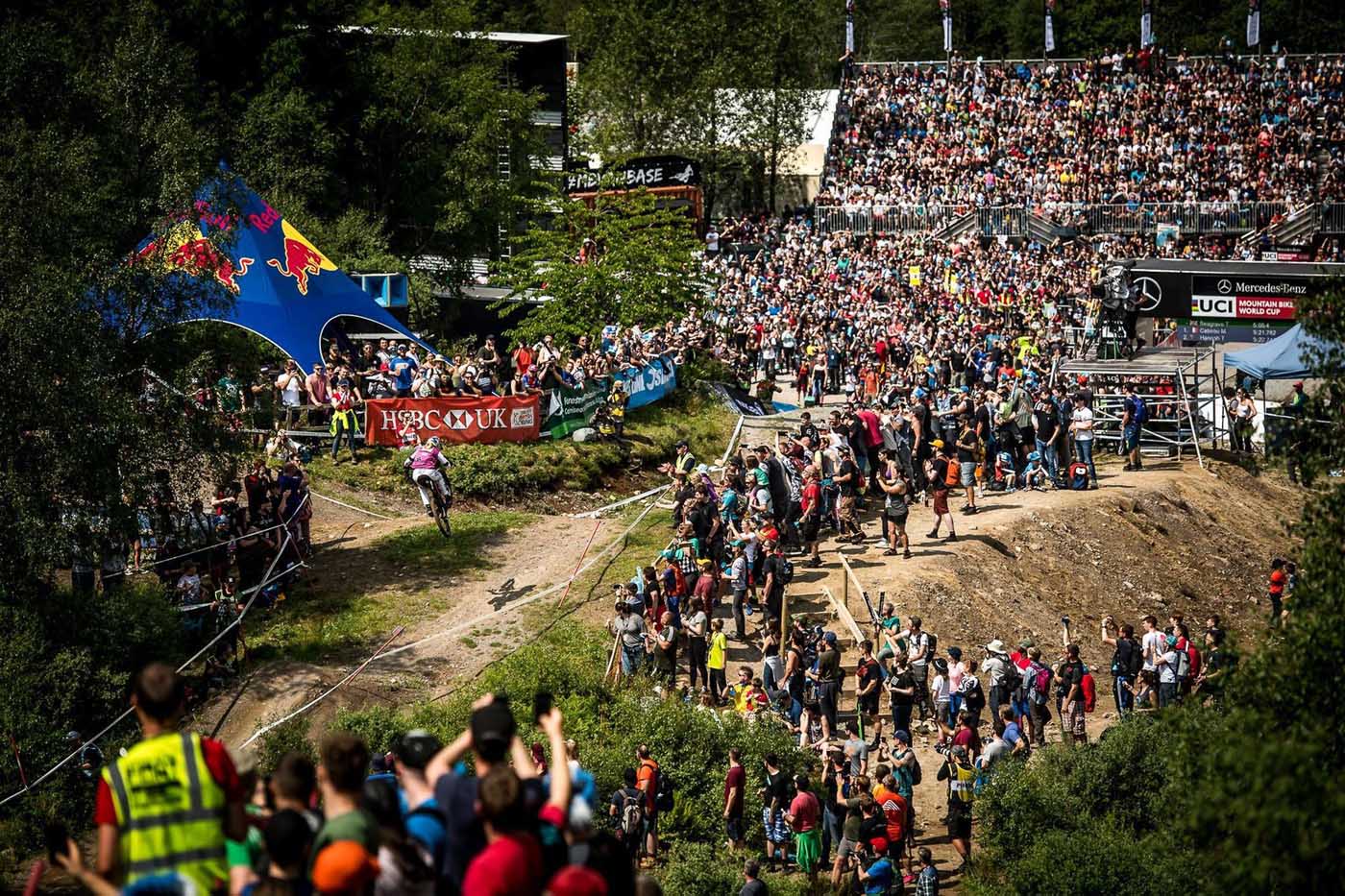 The phenomenon of the Enduro World Series, Cecile Ravanel, returned to the downhill bike to take on her second ever World Cup race. Attacking from the off, there was no doubt in the French rider’s fitness, but she was unable to remove Cabirou from the hot seat.

Australian Tracey Hannah was the winner at last year’s race, and tucking on the boardwalk at the top to conserve her energy for the rest of the course, Hannah rode the course smoothly and smart. Off Cabirou’s time in the splits however, she managed to make up a little coming into the final jumps, but crossing the line 0.9 seconds back, and Cabirou was able to extended her stay in the hot seat – but only until Tahnée Seagrave took to the course.

Flying over the road-gap midway down the course, Seagrave was already a massive 7.8 seconds ahead of Cabirou. Advancing her domination as the course ran on, Seagrave was going all out, and as she crested the Scotland arch to drop into the finish arena, she even pulled a one-hander jump to the delight of the waiting crowd. As she crossed the line Seagrave had amassed an amazing lead of 10 seconds on the current fastest.

Her time was still slower than the one Rachel Atherton set in qualifying so it was hard to know whether this run would be enough to secure Seagrave’s first Fort William win. 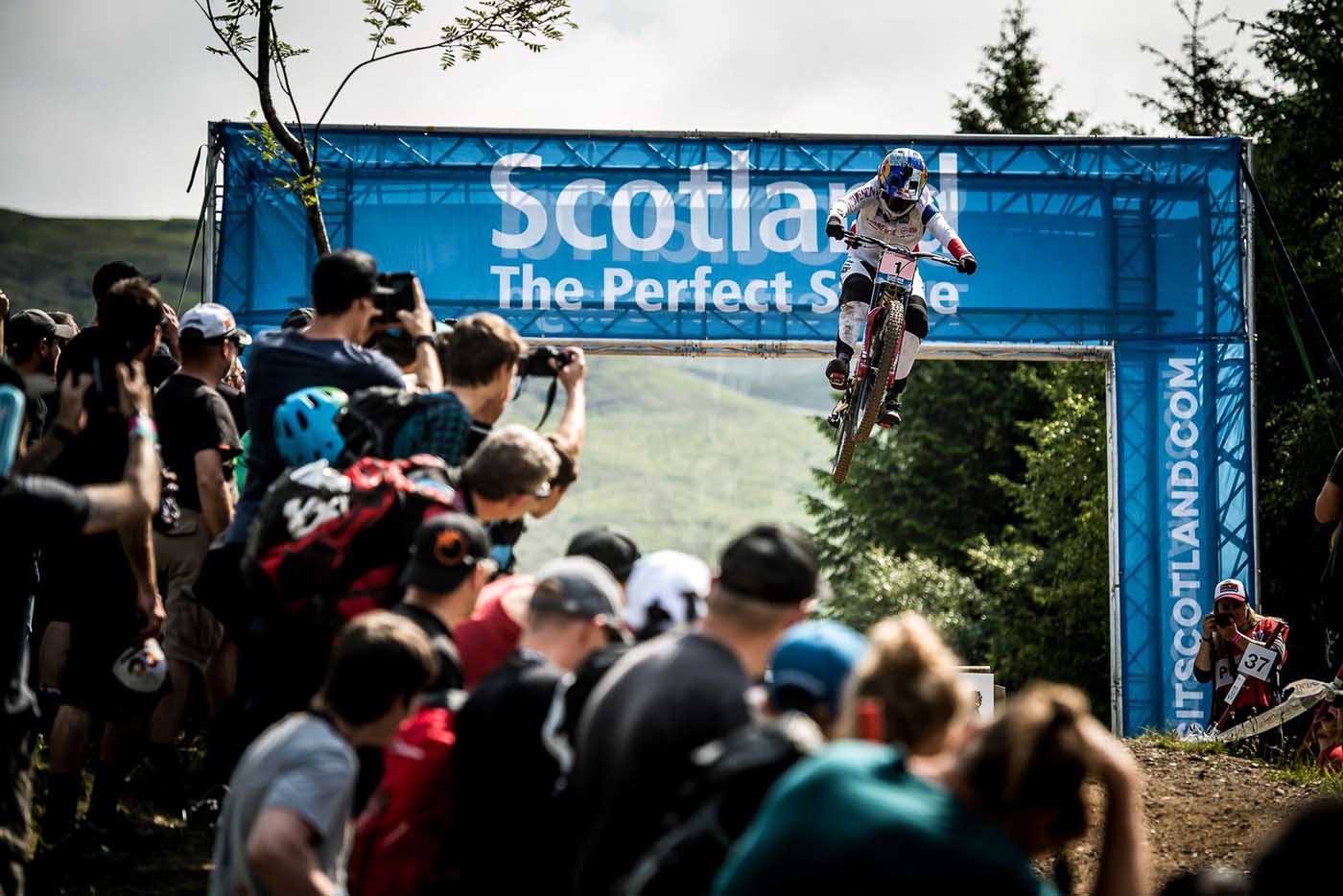 Still feeling strong from her win at the opening round in Losinj, Croatia, Myriam Nicole got off to a storming start on the Scottish course. Sadly, a slide out on some gravel as she entered the woods section knocked the wind out of her run, and she wasn’t able to top Seagrave’s time.

Last to take on the track was the formidable Rachel Atherton. Eyes were all on the Trek Factory racer as she left the gate with some gusto, but almost immediately disaster struck. It looked like Atherton had slipped a pedal, but in fact her chain had snapped. 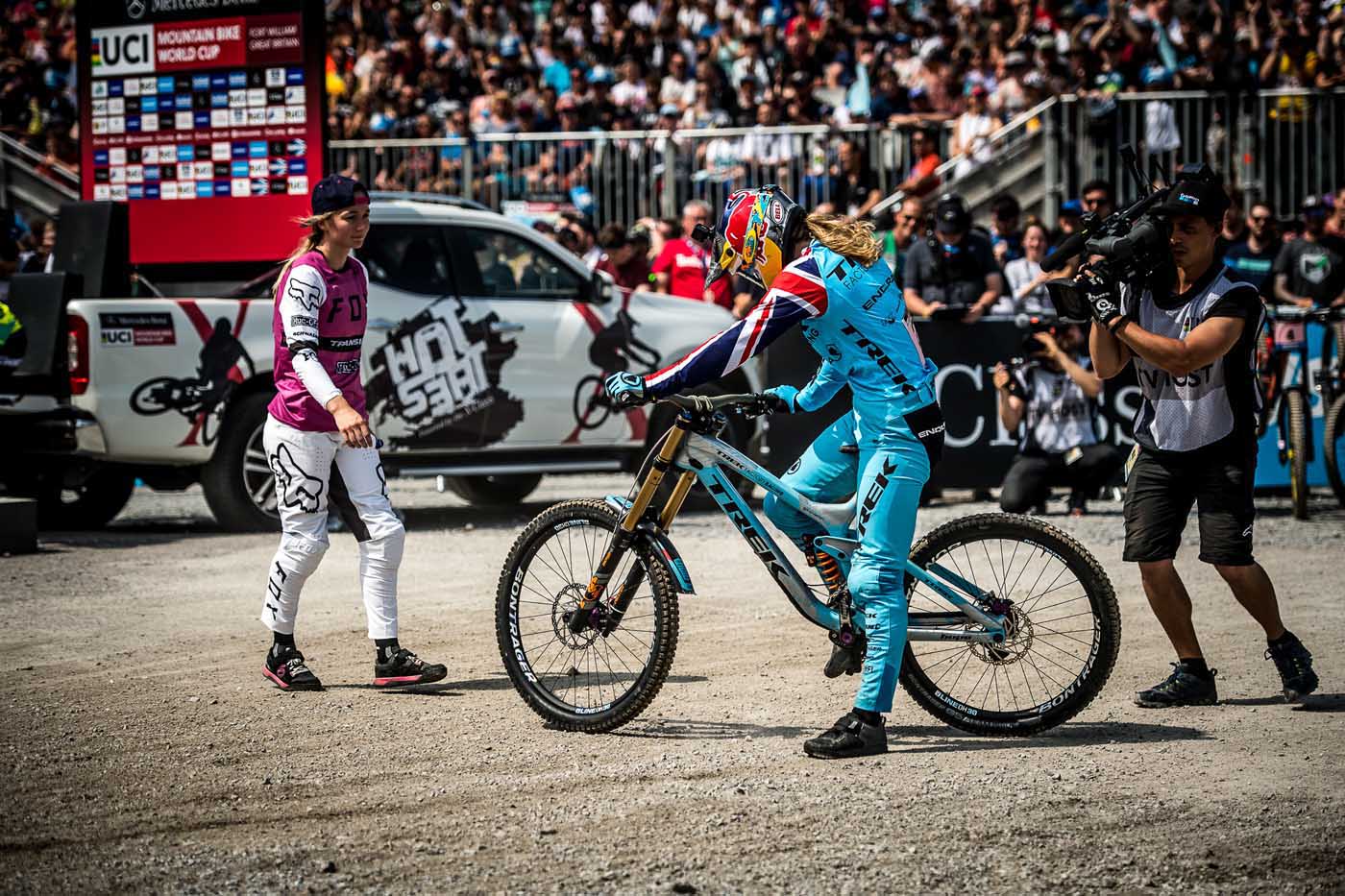 With the longest DH course of the season ahead of her, it really wasn’t looking good for Atherton. However, against the odds she was managing to maintain good speed and time, until a crash before the rock garden brought her run to a halt. Refusing to let it get the better of her, Atherton was quickly back on her bike and heading down the course, tucking and pumping over the big motorway jumps. Despite racing with no chain and suffering a time-consuming crash, Atherton crossed the line to take third place, and an ecstatic Seagrave walked away with her first win on home soil.

If you missed all the action, you can kick back and watch the full replay right here: www.redbull.tv

Thanks to Red Bull for all results, photos and video.