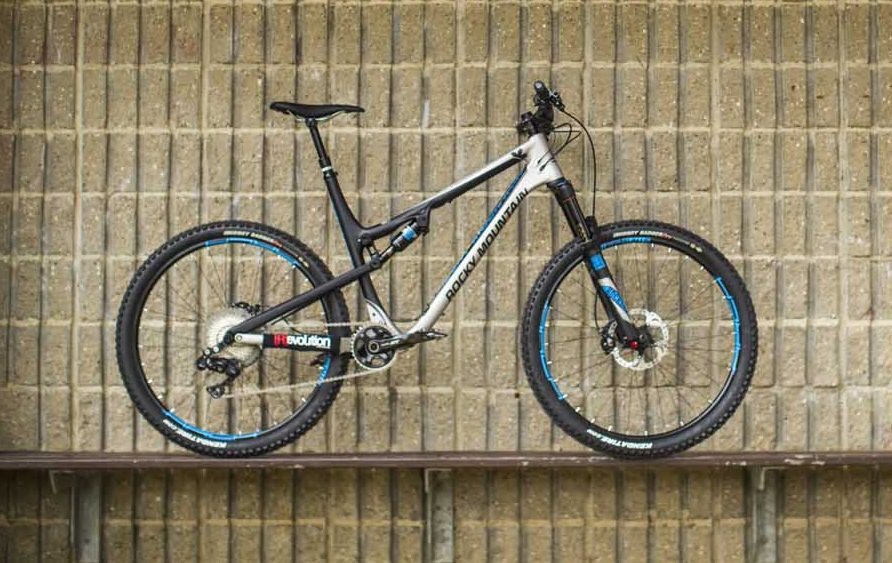 We finally got our hands on a complete production groups of Shimano’s recently released XT Di2 (which stands for Digital Intelligence by the way, you learn something everyday right?). Coming hot off the heels of Shimano’s debut digital groupset, the no-expense-spared XTR Di2, Shimano’s XT Di2 is the result of some very quick ‘filter down effect’ from the Japanese component masters. The individual XT Di2 components look and work very much like their premium big brother XTR parts, however they’re only going to set you back about half the price, and in fact the new XT Di2 range even packs some exciting technology updates over the original XTR Di2 range.

We wasted no time in fitting our XT Di2 groupset to this stunning 2017 Rocky Mountain Thunderbolt ‘BC Edition’. The Thunderbolt’s carbon frame was Di2 ‘internal’ ready, which allowed us to stash the battery and some of the system’s electric wiring inside the frame, out of harms way and giving a very neat, almost ‘stealth like’ look to the bike.

Okay, so lets take a closer look at what we’re dealing with here and introduce you to some of the rad features and technologies.  One of the biggest ‘new’ features of the XT Di2, which the original XTR Di2 didn’t have, is the Bluetooth-equipped processor that offers riders the ability to wirelessly set up their drivetrains. The bar mounted display is not only a three-port E-Tube hub, its readout displays the core info like which gear you’re in and battery life which will keep you entertained when not focused on the trail.

Wireless connectivity is a huge step up over the XTR release, meaning the system’s tune-ability and user-friendliness is off the charts, especially if you happen to use iOS. The new brain and battery sync wirelessly via Bluetooth to a phone or tablet-based app. The app is available for both Android and iOS; the tablet version has more options. Riders can use the app to tune the speed of multi-shift, to program they system to shift multiple gears with a single press, you switch between the direction of which paddle triggers an ‘up’ shift and which paddle triggers a ‘down’ shift, and you can even switch the system from manual to syncro shift, where the system responds to the rider’s shift by automatically selecting the chainring and cog that offer the best chain line for the desired gear size (that’s if you’re running a 2x set up of course). Riders can even program a shifter to control CTD suspension settings on electronic-equipped Fox shocks and suspension forks which is pretty damn cool!

Perhaps the best feature of the new app for current/existing Di2 owners, as if you shelled out for XTR you’d be feeling a little screwed that your premium groups wasn’t Bluetooth compatible. But any current Di2 component is cross-compatible within the E-Tube system, the new brain and batteries will work for both road and mountain drivetrains. The system also gets the D-Fly communication, a private ANT+ system that allows for displaying battery life and gearing on third-party cycling computers so you can get your watts and training going on big time.

The new XT Di2 groupset is all about options, options, options to suit the needs and tastes of pretty much every type of trail rider out there. Coming in 1×11 and 2×11 set ups, with a cassette range of up to 11-46 teeth on the 1x setups, Shimano have released a truly trail aimed groupset. Shift paddles on the triggers are slightly bigger than those of XTR. Otherwise, the system is basically XTR, with some material changes for cost savings as per the trickle down. Thanks to the never ending progression of technology, the motors in the XT Di2 mechs are twice as powerful as those found on Shimano’s road groups, meaning dialed shifting in the grimiest conditions you can imagine. Yep, it’s fully sealed and waterproof, and if your rear end has messy routing, say goodbye to ghost shifting.

We’ve been to ripping trails on it all summer long to really test out the capabilities, performance and long-term durability of Shimano’s latest digital group, so we’ll drop the full test in the upcoming issue of [R]evolution very soon…