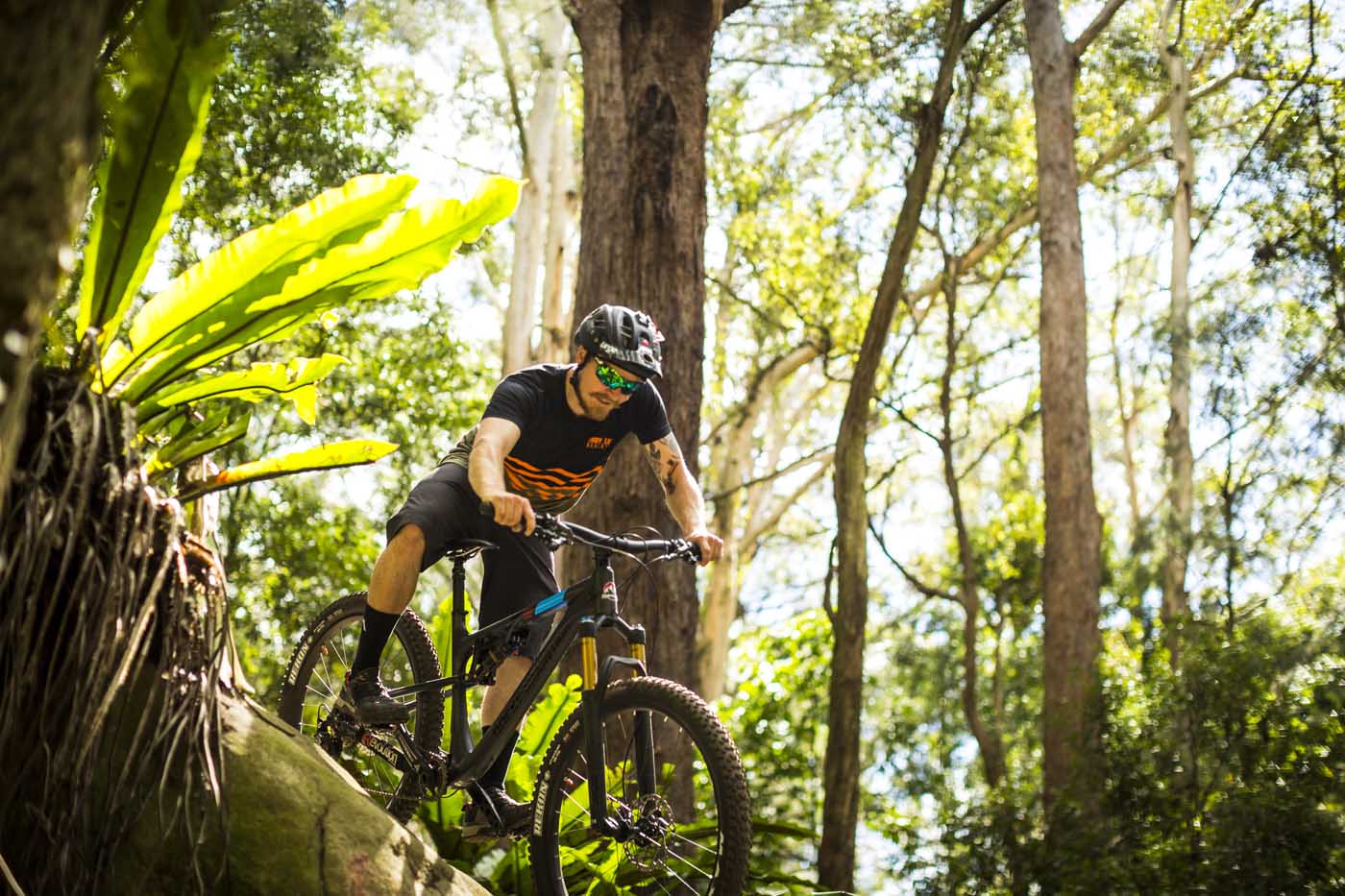 Rocky Mountain’s Pipeline was first introduced back in that epic year of 1998 as the freeride machine of choice for pioneers Richey Schley, Brett Tippie and Wade Simmons, aka the ‘Fro Riders. Who, through movies like Kranked made the original Pipeline more than a little famous. With its yellow and purple paint, unified rear triangle and Marzocchi Z1 fork, it was a bike made to drop off and descend anything and pedal back up for more. BC’s back country being very devoid of lift lines, and well, lifts back then… Come 2016, Rocky have re-introduced the legend. Does the new ‘baby-fat’ bike live up to its namesake?

First things first. Those tyres. 2.8” wide Maxxis Rekon+ tyres to be exact. It’s a lot of rubber and as a result needs 35mm rims to keep that big bag standing tall. You pretty much get a 29er diameter wheel, just now you get some serious cushion. Being that the Pipeline is Rocky Mountain’s aggressive 27.5+ trail bike, it’s a new segment of their already big range. And as such, to somewhat test the waters, it draws on their impressive Instinct 29’er carbon front end mated with an all new alloy rear triangle teamed up with a 150 mm fork. In line with many of Rocky Mountain’s best features, the carbon frame’s ‘smoothwall’ construction reduces any excess material by creating an inner surface that’s as smooth as the exterior. The aluminium rear end runs bushing-style pivot bearings with grease ports, you get internally-routed cables, a press fit bottom bracket, ISCG05 mount for a chain guide and like so many new rides, there’s no front derailleur mount.

The new Pipeline features their “Ride-9 System” that allows the rider to tweak the bike’s geometry and shock progression. There are of course nine positions to choose from, taking the geometry from a slack 67.2° head tube angle all the way up to a steeper 68.8° angle. This allows heavier or lighter riders to run different settings and also offers the ability to tune for the terrain. We tested the 770 MSL Pipeline, which is their blinged out version, featuring an internally-routed Rock Shox Reverb dropper post, Shimano XT 1×11 drivetrain, XT brakes, RaceFace’s sweet Turbine crank, Fox 34 Float fork, and a Fox Float rear shock.

“It’s at its best picking its way through the most technical terrain you can find, where a clock isn’t running and your mates aren’t trying to drop you on every climb.”

So, first ride out it became very apparent, air pressure is seriously important. After bouncing around all over the place running too high a pressure, I finally settled for 18 psi rear and 16 psi up front (I weigh in around 65kgs). So low I know… For my local trails around Sydney’s Northern Beaches, the 2.8 rubber and more than capable suspension really stand out. Ragged, rutted, rock strewn descents to steep and technical pinch climbs, the Pipeline lapped it up. At times, sections that really challenge my mental and physical skills, became simple climbs, even in the wrong gear, those big tyres just hooking up plus sucking up so much of the terrain. And surprisingly enough they roll pretty quick. At speed, the Pipeline is a fair bit of bike to handle, the rotating weight/mass of those big tyres is a handful to change direction with quickly. Once off-line, it’s a big bike to pull back to where you want it. That said, you seem to monster truck your way out of trouble most of the time which had me smiling more than a few times. Though I know a few builders won’t be digging the extra trail width you’ll be putting in should that become habit.

It’s so predictable when your speed increases, anything like small roots, rocks or stutters just gets eaten up by the bag of air, which I kept thinking of as a hovercraft. It corners like it’s on rails thanks to the ludicrous amount of knobs in contact with the trail and begs you to just let it go on the descents. That said there’s a point where that big bag seems to lose it’s charm, lets just say at over a certain speed they start to drift around with not as much feel as you’d like. This is especially noticeable cornering hard at speed, the low pressure give endless grip, but the big bag just can’t hold it’s line when pushed to the limits… Backing it off a touch and getting back in the sweet spot was our solution. Should you find yourself looking at haggard natural terrain to drop through and off, the Pipeline is seriously amazing in its ability to be controlled even in the steepest roll downs.

While I know the Fox 34s were doing their thing admirably, I can’t help but thinking those tyres were taking the brunt of smaller hits. It’s funny, I truly expected to be bouncing all over the place like a beach ball, but once dialling in the pressures, I found the bike planted and was always poised for more. Again, those big tyres have incredible traction, and as a result f’n suck on the road getting home, especially if you’re hammered after hours out on the trail. Also to note is they wake up the neighbourhood if you get ‘em up to speed on tarmac. Moral of the story? Ride this on dirt.

This is a trail bike, plain and simple. Not a race bike, super responsive enduro rig or XC whippet. It rolls on a proper amount of travel, has gnarly tyres, and an efficient suspension system that has an uncanny knack of riding up and over anything in its path. It’s at its best picking its way through the most technical terrain you can find, where a clock isn’t running and your mates aren’t trying to drop you on every climb. More fun than anything I’ve ridden this year? Maybe? A bike to race on, well maybe not.…