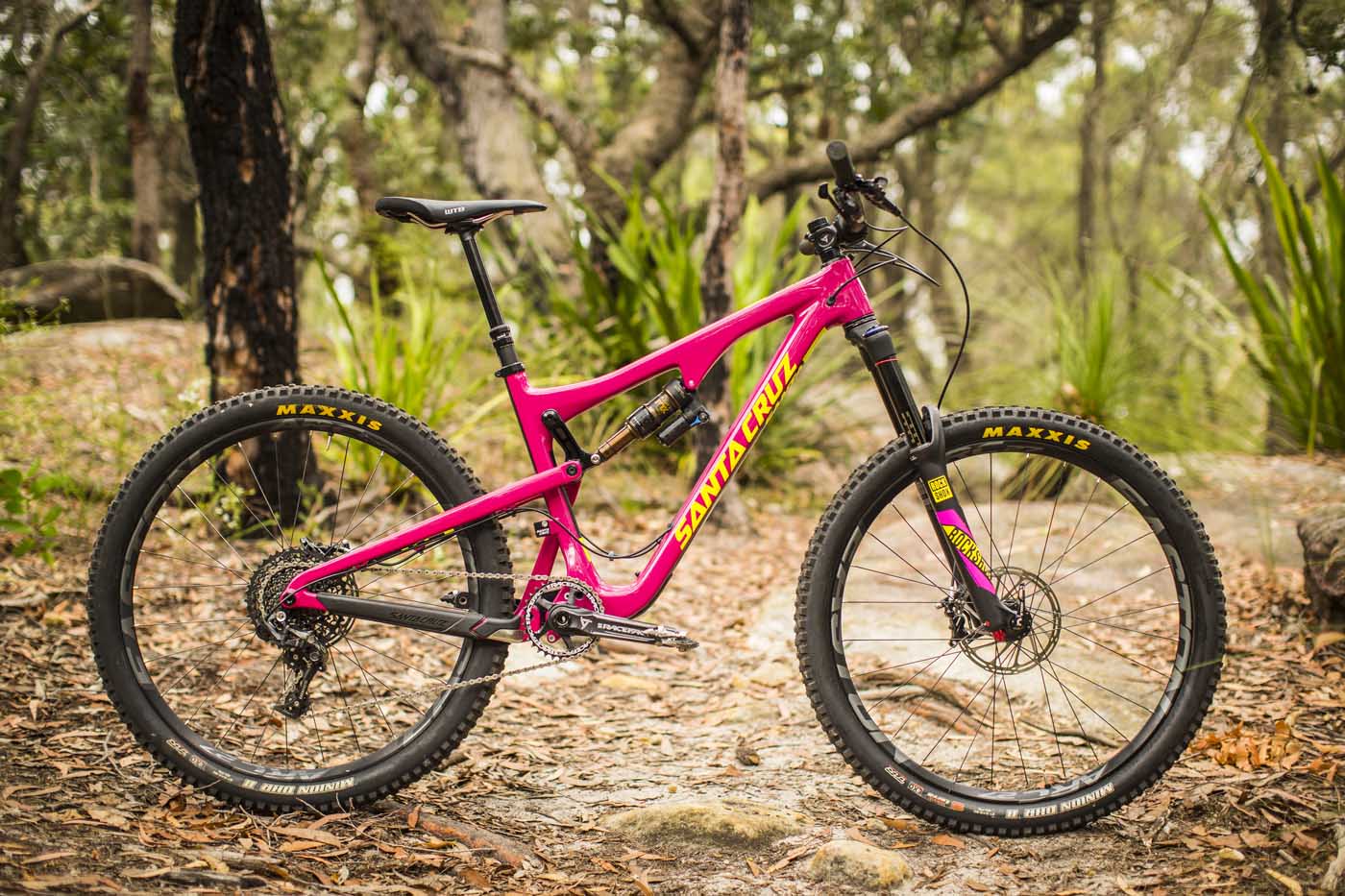 With their first installment of the Bronson frame back in 2013, Santa Cruz were leaders in the industry with one of the first Carbon 650b 150mm travel bikes to market. Whilst it seriously impressed the industry as a whole, being a trailblazer is not so easy to get perfect the first time. Come 2016 however, it’s fair to say the geometry trends have now developed somewhat compared to what Santa Cruz had initially gone for with the first Bronson. Bikes in this sector have all been developed lower, longer and slacker to account for the more aggressive riding that both racers and punters like us are now riding. Largely driven by the Enduro World Series, which has become the proving ground for bikes from 170mm-140mm of travel. In steps the new iteration of the Bronson. Sporting an updated linkage design, wider Boost rear end, with the longer top tube and slacker head angle that everyone craves in their 150mm trail weapon.

When I first eyeballed our ‘Kalimotxo’ coloured Bronson CC test bike, I couldn’t help but think, “wowzers, this thing won’t get lost in a crowd!” But the bright colour did grow on me quite fast. When I swung a leg over our medium, the top tube definitely felt on the longer side to what I was used to, but it was quickly forgotten as the bike just felt right the more I rode it. It also felt quite light, with the CC offering being 280g lighter than the C model. It’s quite a bit when you factor it in being lost in just the frame alone. The bars at 800mm definitely would need to be cut down. I have been used to 750mm but maybe 760mm would be nice for me, given the option to cut them to whatever I would like. The flow track at Thredbo was going to be its first outing so the wider bars would do for now. The build seemed super capable. Everything you needed and nothing you didn’t. I had a little scepticism regarding the wheels, as I’m notoriously tough on them. 28 hole Easton ARC27’s just didn’t seem enough for what I would want to ride on this bike. The rear shock was the new Fox Float X Factory with the EVOL can and it felt great. The bike actually felt super lively and definitely more pedal friendly than I had imagined it would be. With the 150mm Rockshox RCT3 Pike up front you couldn’t go wrong.

I managed to ride this bike at a number of varying locations and had a blast on pretty much everything. From the fast wide open speed of Thredbo to the tighter more technical trails of Bright and Falls Creek. With the slack head-angle and longer top tube it definitely enjoyed the descents and high speeds at Thredbo. The bike was quite stable and easy to control thanks to the longer top tube, shorter stem and wider bars. Compared to some other 150mm travel bikes it also pedalled surprisingly well, without that wallow feel you sometimes have on the longer travel bikes. I even managed to get this bike over to Queenstown and ride their new “Salmon Run” trail, the pedal up from the Gondola is no mean feat. With some super steep climb sections, the front wandered a little due to the slacker angles. However I easily forgot about it as it turned into one of the steepest trails I have even ridden back down to town. I was super stoked for every degree slacker that I had. Towards the bottom, when it flattened out just a little, and the number of roots and rocks intensified to a slippery mess, this was where the bike really performed. The bike just seemed to flow so well, holding its line just as you had asked. It was the type of track if you lost your speed it was impossible to get it back without an awkward struggle. Pedal strikes due to the low BB did seem to be a little bit of a problem, but is really part and parcel with this type of bike, and the benefits of the lower BB far outweighed the odd strike in super technical pedal sections. The combination of the new EVOL can on the Fox Float as well as the new linkage locations for the VPP suspension and a refined shock rate have definitely helped the bike’s pedalling efficiency as a whole. With the mid stoke being quite progressive it never really got bogged down. The weight of the CC model is definitely less of a drag as well. With the rear end being the slightly wider Boost 148, the chain stays have been able to be reduced in length, whilst still allowing the same tyre clearance. It also helps add stiffness to the ever-important rear end and nimbleness on the trail. 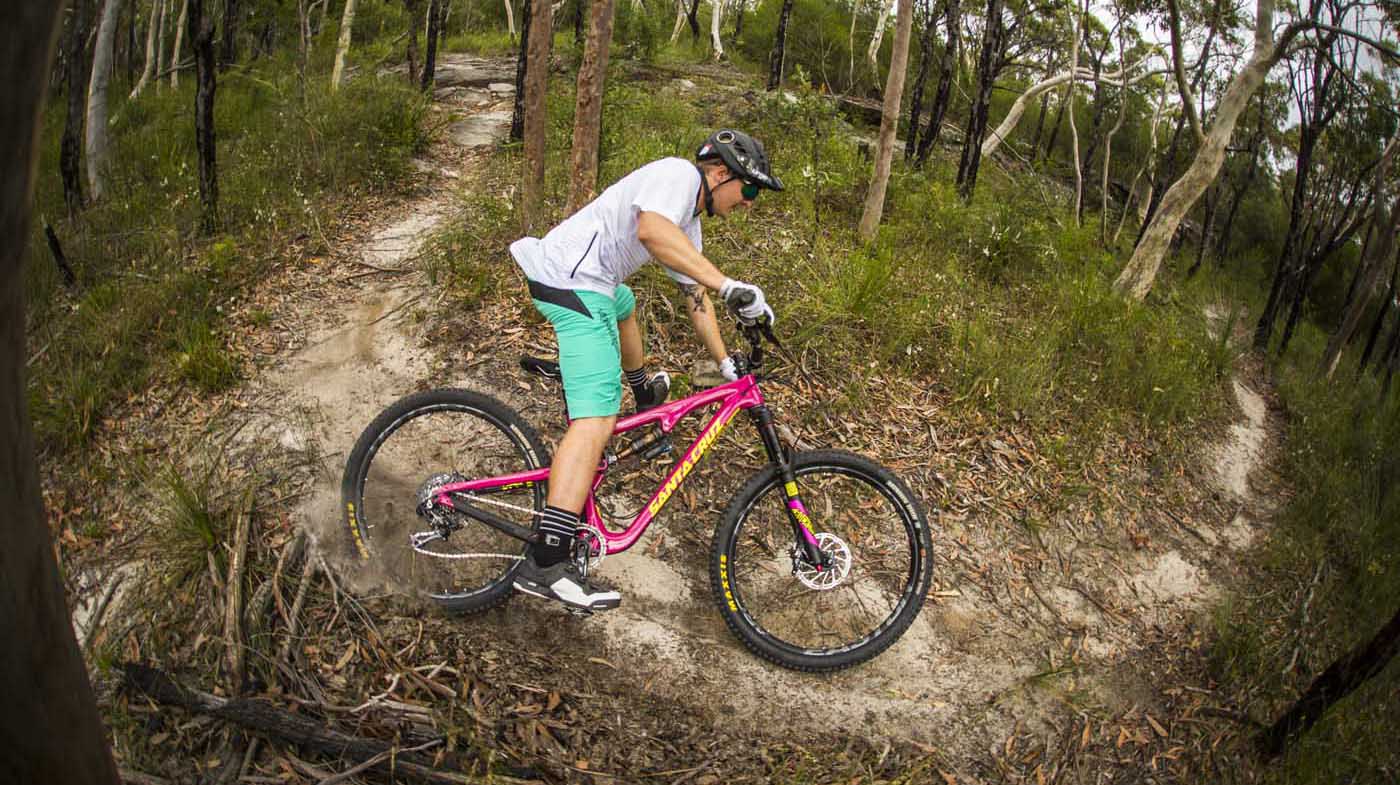 The aesthetic loving photographer in me would have loved to see some other colour options as Pink and Black won’t really satisfy everyone. I did however definitely warm to the bright and larie Kalimotxo colour and it does look great in photos. Still on aesthetics and that’s one thing I think they did really improve on, with the new VPP linkage arrangement, it definitely has a faster look, that’s more like its bigger brother, the Nomad. The wheels did end up being something I had durability issues with. I really think 28 holes is just not enough, and it also then limits you to upgrading the rim’s as your hubs are still only 28 holes limiting your rim selection. As a double whammy, thanks to the new Boost 148mm rear end, It does also create a small amount of initial frustration, when you realise swapping out wheels for a better set you may already have will not be so easy. However that will soon be negated, and end up being a positive as more and more bikes come with the new standard. Boost 148 will soon be the norm. If you’re light on wheels though, then none of this will really be an issue for you. Cutting down the bars is definitely a good option, and I kind of like the fact they have given you a big bar, so you can cut them exactly to the width you would like. The frame does have some rubberized protective elements that I would have liked to have seen more of, particularly in the very vulnerable down-tube and bottom bracket area.
Within Santa Cruz’s stellar line-up, the Bronson really sits perfectly as their middle of the road option when it comes to aggressive trail riding with the Nomad and 5010 sitting either side. It is the perfect option for Australia. Whilst with all do-it-all kind of bikes there is the usual sacrifices you need to make. These can’t really be changed, it’s about getting it just right, the combination of BB height and head angle being the main determining factors. If the BB is too high, it has pedal clearance, but does not corner as well. If the head angle is steeper, it climbs a little better, but the descents are scary. With bikes like the Bronson it’s all about balance, and I really think they have hit the nail on the head with their new geometry spec’s. With the way the sport is developing it was the right move from the first Bronson they made, to this newer one. To sum it all up, the new Bronson CC is an amazing bike you will not be disappointed to own. The bike has already won acclaim amongst the industries media and it really is no surprise. Santa Cruz has been doing great things, and really taking it to a lot of the much larger brands. The new Bronson’s have been walking out the bike shop’s doors and as this segment in the industry keeps growing, Santa Cruz should continue to be one of the leaders. 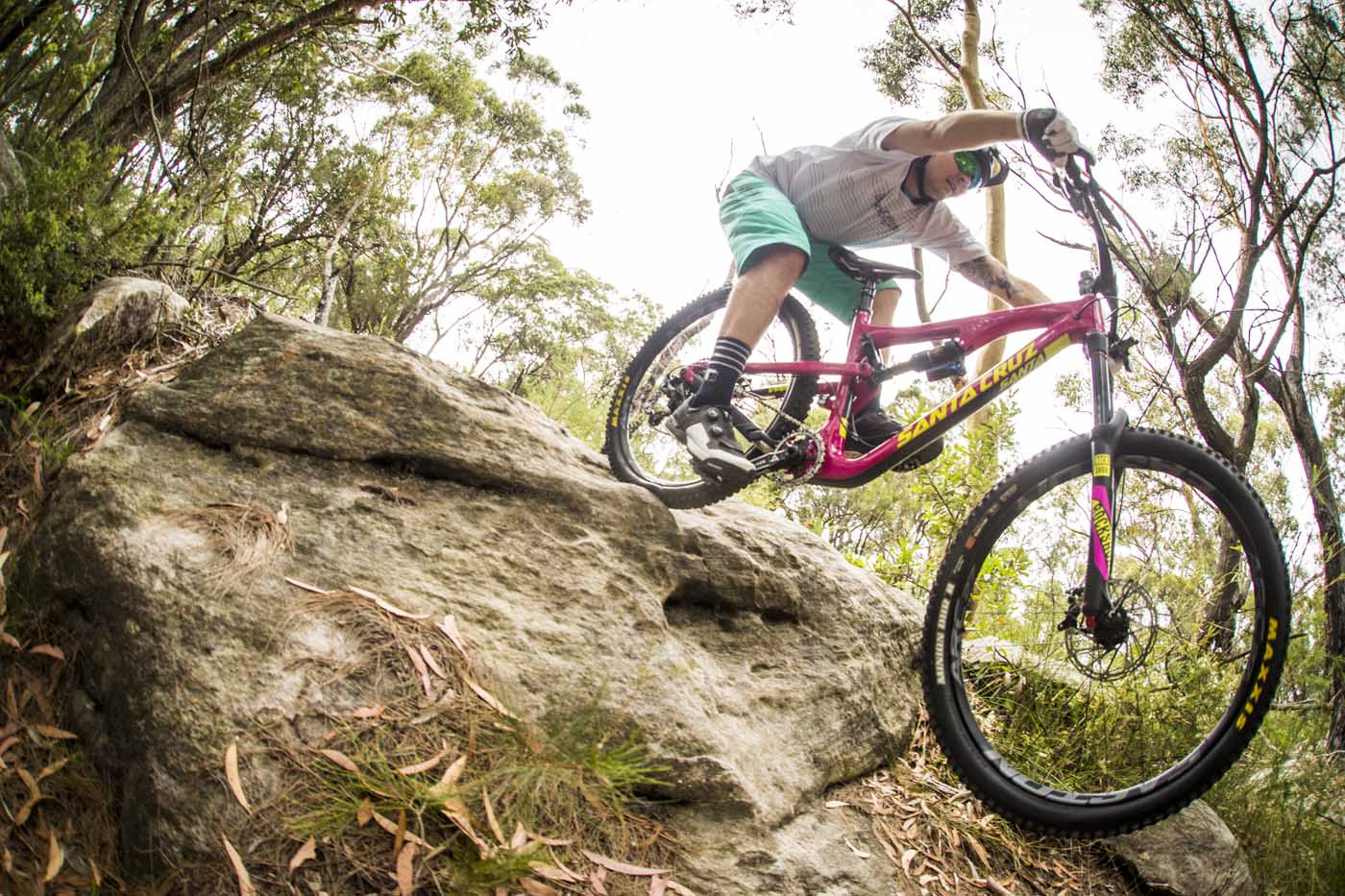