THE KIDS ARE ALRIGHT

REFLECTIONS OF A BIG KID

There were a few aligning factors that brought Cam McCaul into the mountain biking world when he was a youth living in Aptos, California. He had the freedom to recreate, forests to explore and most importantly, the time to do it all. But the biggest thing that spurred McCaul’s own riding (and the whole mountain bike community in Aptos) was a vacant lot next to the local post office. Dirt mounds were slowly built, shaped and polished by McCaul and his friends into what would eventually become known all over the world as the Post Office Jumps.

“We were having a full on free-for-all in that dirt lot,” recalls McCaul of his early years of digging and pushing his limits. “If we wanted to see how far we could jump, we’d build a jump with a landing 40 feet away. I think having the ability to make it whatever we wanted was one of the prime factors that made that place so special. We could turn ourselves into whatever kind of mountain bikers we wanted to be, build whatever kind of scene we wanted to build.”

Now all grown up with a decorated freeride career under his belt and children of his own, McCaul has not lost sight of the opportunities he was lucky enough to have as a youth. Having settled down in Bend, Oregon, the jumps in his own backyard are becoming a stomping ground for neighborhood kids on their bikes. The culture may have evolved, but the core of the sport has changed little. Seeing it all come full circle with the next generation of mountain bikers — within a stone’s throw of McCaul’s kitchen window — is one of the more satisfying parts of his career as a professional freerider.

“Now, because of the internet and how much mountain biking has been captured and put on video and sent out to the world, the foundation of what is normal for kids is a million times what it was when I was riding,” says McCaul. “They have the perspective of what other kids are doing and they use that as their baseline. A kid who just got on a bike for the first time that year and hasn’t even cracked double digits in age could already be doing a backflip.” 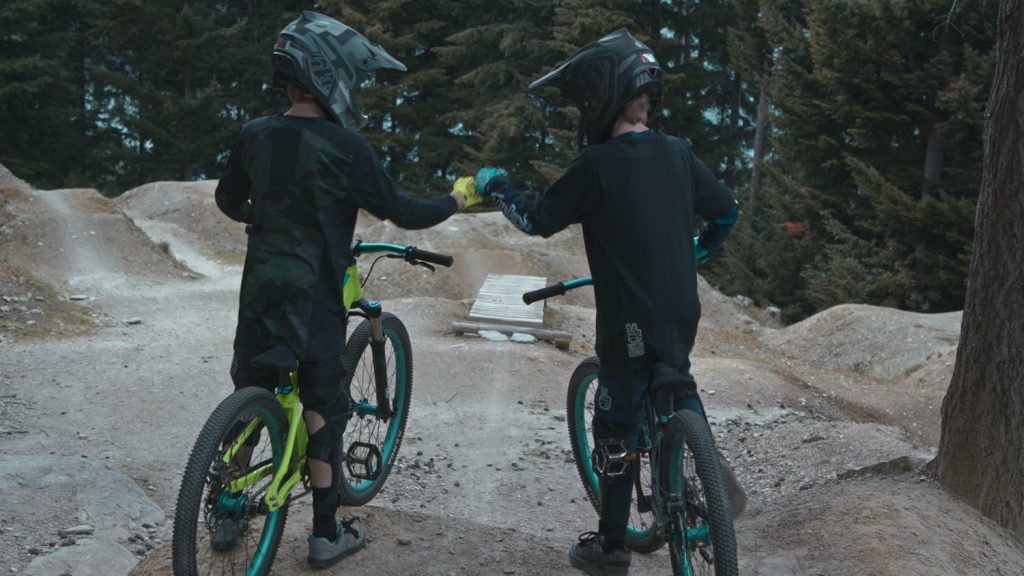 As a father and mentor to younger riders, McCaul is often asked by these aspiring athletes (or their parents) for advice. The problem, he says, is that they’re asking the wrong questions such as “how do I build my instagram account?” and “how do I get my kid sponsored?” The upside to a rich media landscape is that kids are always inspired. The downside is a fierce competitiveness that can drive kids (and by association, their parents) to an excessively regimented lifestyle. “You have to remember that kids are supposed to be enjoying what they’re doing with their free time, it doesn’t have to be a job,” says McCaul.

“Enjoy the now. You have no strings attached, you get off school and you get to go ride your bike. That’s amazing, so go enjoy it. Build those skills so you can enjoy mountain biking for your whole life.”

Sounds like the best advice a kid could get.