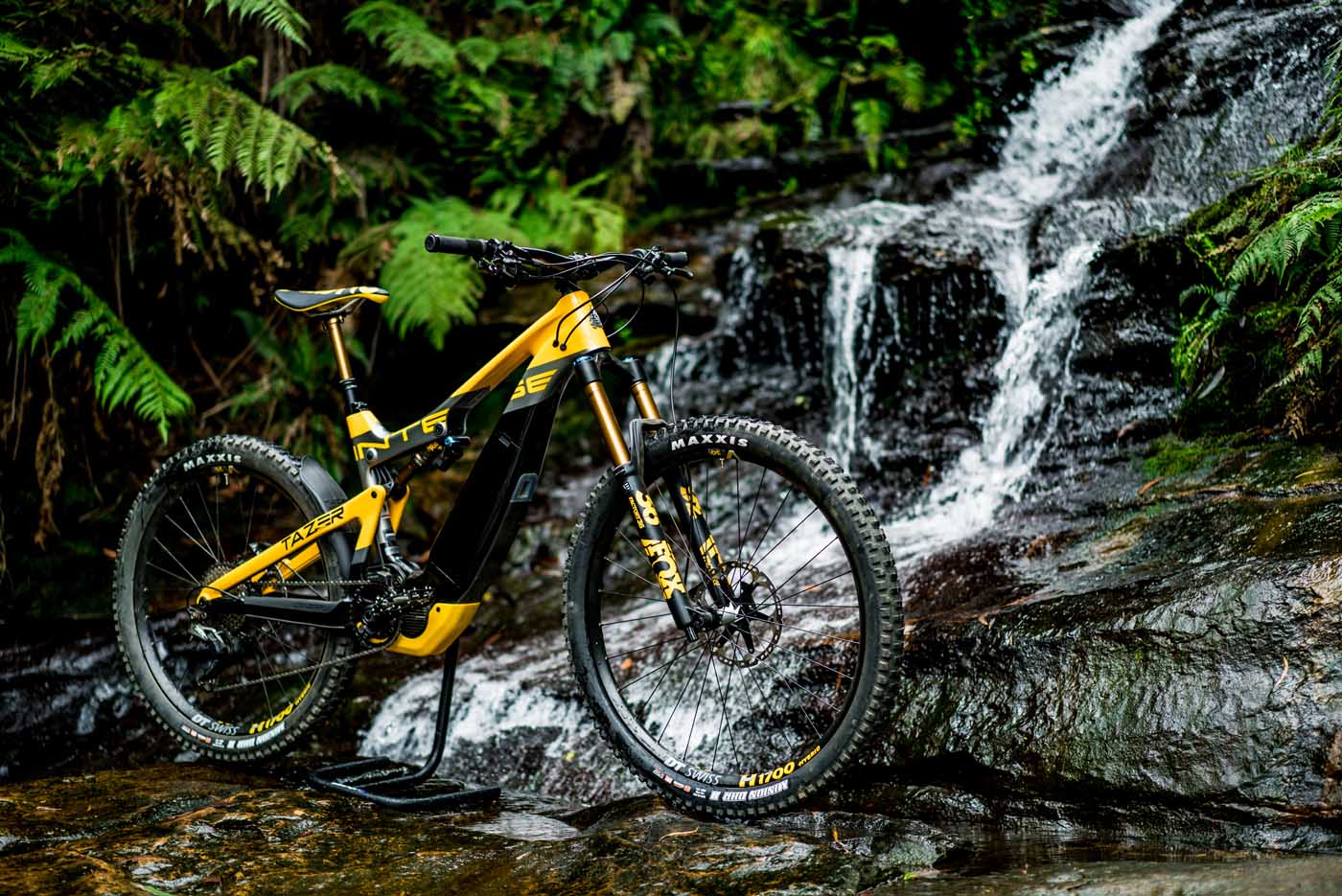 The beast has arrived! At 9am one morning early in December a courier truck rolled up to V-Sports’ (Intense’s Aussie base) headquarters to deliver the very first Tazer to arrive in the country. Having been offered the exclusive first review we arrived at V-Sport at 2pm that very same day to collect the bike and by 4pm we were out on the trails clicking it straight into Boost mode!

Being the first bike in the country we were only granted access to it for 48 hours so this is very much a ‘first impressions’ piece, however don’t worry as we’ll be doing a full in-depth review in the near future.

Intense fans might remember the original Tazer from back in the day as an awesome looking monocoque jump style hardtail. Having not been a part of Intense’s line up for well over a decade when the brand started working on either e-Bike project, using the Tazer name was an obvious choice. Electricity, Tazer, get it?

Okay so what are we talking here… To begin with the Tazer is only going to be offered in one spec level. And if you take a peak at that price tag, yep, this is certainly not a cheap bike. That said, you are getting a full carbon frame which is littered with candy sweet components, including the best e-Bike motor in the game right now. We are of course talking about the Shimano Steps E8000. The most striking feature is that the battery is integrated right into the Tazer’s oversized down tube and features a trap door style panel which keeps the battery hidden away from danger and the elements.

Suspension wise it comes with a Fox Factory Float DPX2 shock which puts out 150mm of rear wheel travel, while there’s a 160mm Fox 36 Factory fork (the eMTB version) up front with the latest GRIP2 damper offering buckets of control. Because what goes fast must also come to a stop Intense has smartly spec’d the Tazer with a set of powerful Shimano XT 4-piston brakes and 200 mm front and rear brake rotors.

One very interesting detail to note is that Intense chose to go for mixed wheel sizes on the Tazer. It features a DT Swiss H1700 hybrid wheelset consisting of a 30 mm internal width 29″ rim at the front and a 35 mm internal width 27.5″ rim at the rear. The Tazer rolls on grippy MAXXIS Minion DHR tyres, 2.6″ wide at the front and 2.8″ wide at the back. The concept of featuring a larger diameter front wheel with a narrow (ish) tyre coupled with a smaller rear wheel with a big fat tyre, was an idea that Intense borrowed from motocross. But how does it actually play out in real life? Well,  the 2.6” rubber up front is still ‘wide’, it feels like it still has a precise, non-wallowy feel that wider tyres can suffer from, meaning it’s easier to thread the bike through technical terrain. At the back, the well-supported 2.8” tyre boosts grip, helping to monster truck up those steep climbs and manages to find traction even on the loosest trail surfaces.

Now, geometry wise our size large test bike had a reach of 475mm, with the 64.9-degree head angle and 450mm chainstays giving a wheelbase of 1260mm. In e-Bike terms this makes the Tazer quite a long bike. While the motor assist is going to help you up even the toughest climbs we are pleased to see that Intense has opted for an efficient seat tube angle of 75.4° which allows for a comfortable climbing position.

Perhaps more so than any other Shimano Steps E8000 equiped bike that I’ve ridden (and there has been heaps of them) the Intense felt as if it got up to it’s 25km max assistant speed the fastest and the easiest of them all. So much so that I constantly felt as though I was riding right on that threshold, even when I was razing along tight sections of trail. Yep, this bike sure does feel fast. From the very first ride the Tazer’s 155mm of rear suspension felt well tuned straight out of the box. The initial part of the stroke didn’t feel harsh in any way and there felt like there was ample progression in the stroke too. I would like to spend more time playing with those fork settings and a few other things, such as tyre pressures, to try to really hone in on and discover the bike’s full trail potential and that will be the plan when we get the opportunity to spend a few solid weeks testing the bike down the track (or trail!)

“As far as first impressions go the Tazer is an impressive machine.”

In terms of buying yourself an Intense one of the cool things about the way Intense operate in Oz now is that you can either go to a dealer to see the bikes in the flesh or you can just jump online purchase one to be delivered directly to your door, either way you go about it you’ll also be able to take advantage of an awesome 12 months interest free plan which will really take the sting out of making that multi-thousand dollar investment. Check out the Aussie Intense website for more information.