Australia’s latest emerging Enduro star was already a very familiar face in the world of bicycle racing. ‘Vandy’ as he is known to his mates, became a World Champion in 2013 when he won the XC Eliminate at World Champs in South Africa. With that iconic rainbow jersey on his back, the Giant Bicycles Australia backed rider spent the following few seasons spreading his talents across XC and road racing. Hungry for a new challenge, for the 2017 season, Paul decided to step in a new direction and focus his talents on gravity enduro racing. [R]evolution Magazine recently caught up with Paul to discuss what it’s been like adjusting his ‘game’ for the world of Gravity Enduro racing.

[R]: So Vandy, last year you were racing on the UCI Asian Tour over in China and Japan and this year, you’ve been battling it out down some of the roughest trails imaginable as part of the Enduro World Series. Bloody hell mate, a lot has been going on for you recently?

Paul:  It has been a wild year so far. Gravity Enduro and especially EWS is a crazy format. In so many ways the Enduro racing captures what I love about riding my bike. Exciting trails, riding with mates and a competitive element to increase the trash talk throughout the day of riding. It is a stark contrast to road riding and XC and that’s probably why I love it. Half way through last year I was so cooked from super hard racing, I needed to make a change and Enduro seemed like the logical choice.

Coming from Cross Country mountain bike and road racing, has entering the world of gravity enduro been a steep learning curve?

It’s way harder than I anticipated. To be fast at enduro you need to be able to pull together so many different aspects of cycling. You need to be unbelievably dialled on your technical skills as well as being fit enough to survive an eight-hour day on the bike. My bike setup has changed so much from my original setup. I’ve also had to learn where to attack and where to keep it safe and smooth.

I know that you and Josh (Carlson) are close. Has witnessing his rise through the EWS ranks as a member of the Giant Factory Off-Road Team maybe been a bit of an inspiring factor in you giving Enduro racing a crack this year?

Carlso and I used to battle it out on the Aussie XC races a few years ago and he is a high energy human like myself, so we always have a good laugh when we see each other. I was super jealous when he followed his heart and got involved with the Gravity Enduro stuff. I have chatted with him whenever he is back home and he kept telling me to ditch the XC bike and come play on the trail bikes. It’s interesting to see Josh now at the EWS, because he is more serious than ever. Being on the Giant Factory team involves pressure to be really fast and be at the pointy end of the results sheet. He also has a family now, so he has more to live for.

Let’s talk about how this year has been going. You raced all of the early EWS rounds and were doing well, but then your season got thrown a curve ball down at the Derby, EWS. Talk us through that?

This year has been wild! I’ve been totally focused on Enduro and almost forgot what it felt like to ride in Lycra. I really enjoy doing the Aussie Enduro races and riding with mates. The first EWS in Rotorua was crazy with rain and mud making it a battle of survival. Instead of attacking the stages I was just trying to ride them without crashing too hard. It was awesome to see Wyn Masters get the win there after spending time with him as the local 2W races in the months leading up to the EWS. Then the travelling circus came to Tassie and it was going sweet until my final practice run on the really fun Trouty trail. I came in too hot to a rock catch berm and went over the bars and re-injured my right shoulder. 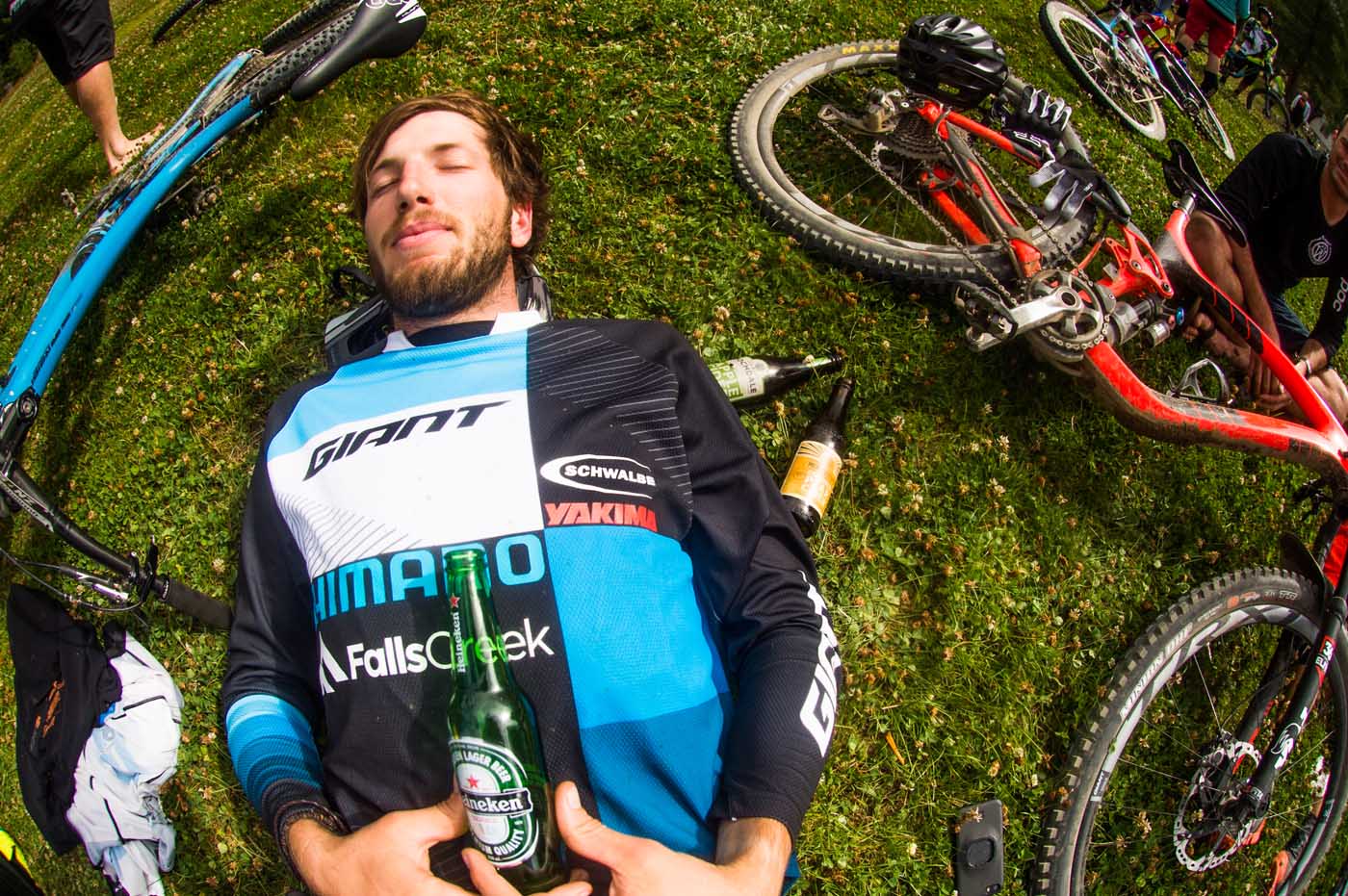 Damn… and you’re no stranger to shoulder surgeries either. Haven’t you already had two shoulder reco’z during your career to date?

I’ve dislocated my right shoulder nearly 50 times and the surgery I had was supposed to be unbreakable! The surgeon is not stoked on me as his patient and ruining his perfect record.

So it’s been a couple of months since Derby, how’s the shoulder feeling now?

To be honest it is pretty rubbish. I’ve been working with the physiotherapists at Kieser training in Melbourne. They also have specific rehab strength and condition programs and hopefully they can help me get back at it ASAP. In the mean time I’ll be keeping busy doing some cyclocross for the Aussie winter and hopefully get back over for the EWS final in Italy. 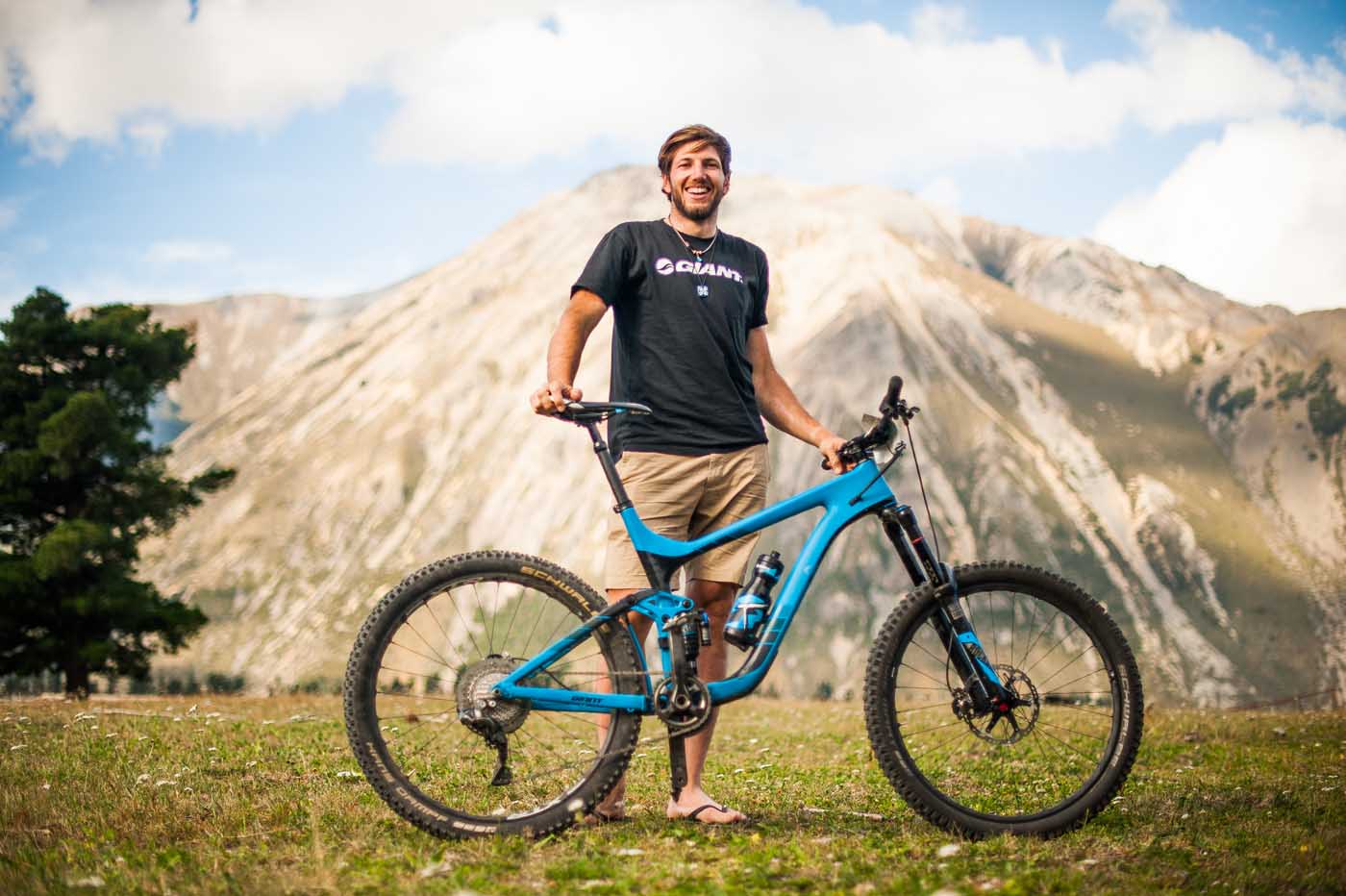 Let’s talk about your current bike. What have you been racing this year?

I’ve been on both of Giant’s trail bikes, the Trance and the Reign. They are both really capable bikes, but for the EWS I have been mostly on the Reign because of the higher demand technically.

How have you got it set-up? (Custom spec? Do you make any ‘Paul specific’ mods or tweaks, etc, etc?)

Both bikes are pretty much fully custom with Shimano XTR Di2 builds and Fox Suspension. I have been playing around with setup a lot. Bar width, stem length. Also things like cleat position have been an interesting change. When I first setup my Shimano ME7 shoes, I had the cleats too far forward and that loaded up my calves so much that I couldn’t walk up and down stairs after the first few Enduro races. I’ve now moved the cleats back and it is night and day difference.

“To be fast at enduro you need to be able to pull together so many different aspects of cycling. You need to be unbelievably dialled on your technical skills as well as being fit enough to survive an eight-hour day on the bike.”

Does it take you long to get used to the ‘squish’ of all that suspension after you hop off the road bike and your rigid XC machines?

It is hard to get your head around how capable a bike like the Reign is compared to an XC bike with the seat at full height. The geometry, longer travel suspension, pretty much everything, allows you to ride the most rowdy trails without having to think too much. Suspension setup has been interesting and luckily I’ve had the chance to talk with the people at Fox and learn what settings will suit my riding style and what I should be doing with the more technical settings like low and high speed compression. Without that guidance I would have no idea.

Growing up in Mount Beauty you must have been spoilt with trail choices each day. Describe to us your ultimate trail?

I didn’t even appreciate what I had in Beauty until I left to study in Melbourne. I used to finish school, go back to Mum and Dad’s bike shop, kit up and ride world class trails till it was dark! Man I was so spoiled. Now if I want to ride a good trail it is an hour’s drive in rubbish traffic. The ultimate trail for me is something natural that utilizes the natural features of the bush/forest and always keeps you guessing on what’s around the corner. I love the thrill of sending it down a trail and testing how fast you can handle the corners without over cooking it.

Earlier this year you took part in your first multi-day Enduro race at the Trans NZ – how was that whole experience?

Mind blowing! The Trans NZ was a crazy experience in so many ways. One of my favourite parts about riding a bike is hooking into a sweet single track downhill for the first time. Trans NZ is five days of hanging off the back of your bike and trying to anticipate what the trail is about to do. It’s pretty much the ultimate week away riding some of the best trails in the world. Cannot recommend riding trails in south island New Zealand enough.

We understand there is a huuuuge amount of riding involved across the five days? But checking out the coverage of that we ran from that event last issue it looked like you and Ronning and the rest of Shimano crew spent most of the time drinking beers and hanging out at the top of pretty mountains?

Hahaha. I don’t know what you’re talking about. As long as you have a good crew to talk trash with, it is easy to get through each day. Everyone is so chill over there, it’s awesome. People think Aussies are chill. Go over to NZ and they will show you a thing or two about having fun and riding trails.

You ended up on the podium at that event, didn’t you?

It wasn’t about the results sheet at Trans NZ. I was surprised to be anywhere near the top and I eventually got smoked by the Queenstown locals. It was fun to give it a run, but at the end of the day it was about the event and the results were just an excuse to give people bragging rights with their mates. I did get a sweet toilet roll holding trophy and TP’ed the podium on the final night. 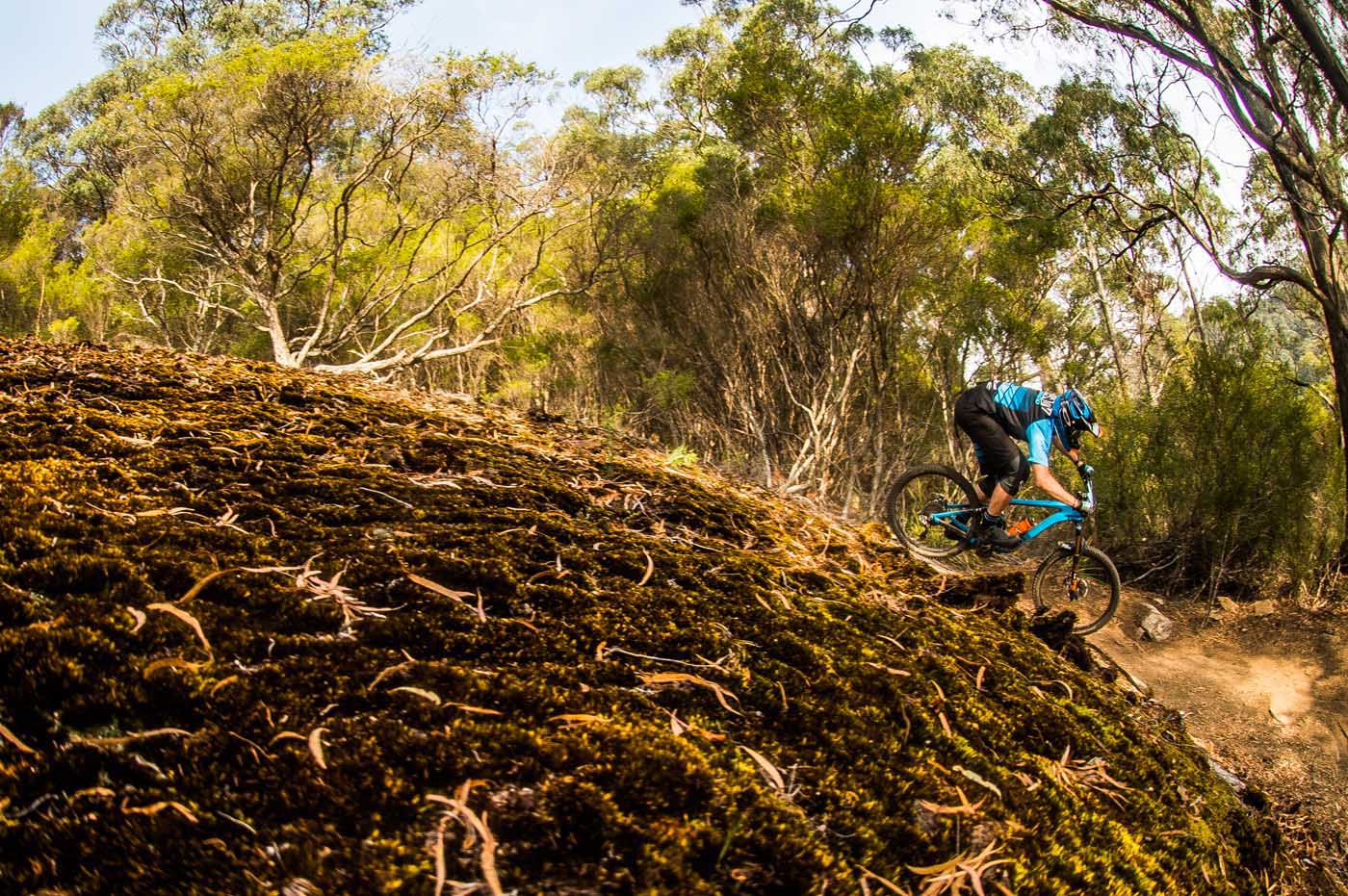 As a side question; you look about 9 foot 3 inches tall, how tall are you in fact?

Hahaha. I think I look even more oversize on a bike because I have stupid long legs and arms. To give an idea, my arm span is 12cm wider than I am tall. To clear it up I’m 6 foot 3 inches or 193cm.

So going forward, once the shoulder gets better, what is your plan for the rest of the year and next season?

I’m keen to get the body back as close to 100%, but will keep riding and racing where possible. I’m looking forward to doing some CX and XC on the new Anthem 29er that was just released. I think Josh Carlson and I are going to race the Cape to Cape with Sam Hill in October! Before then I’ll do what I can to race Italy EWS and any other Enduro events I can fit into the calendar. 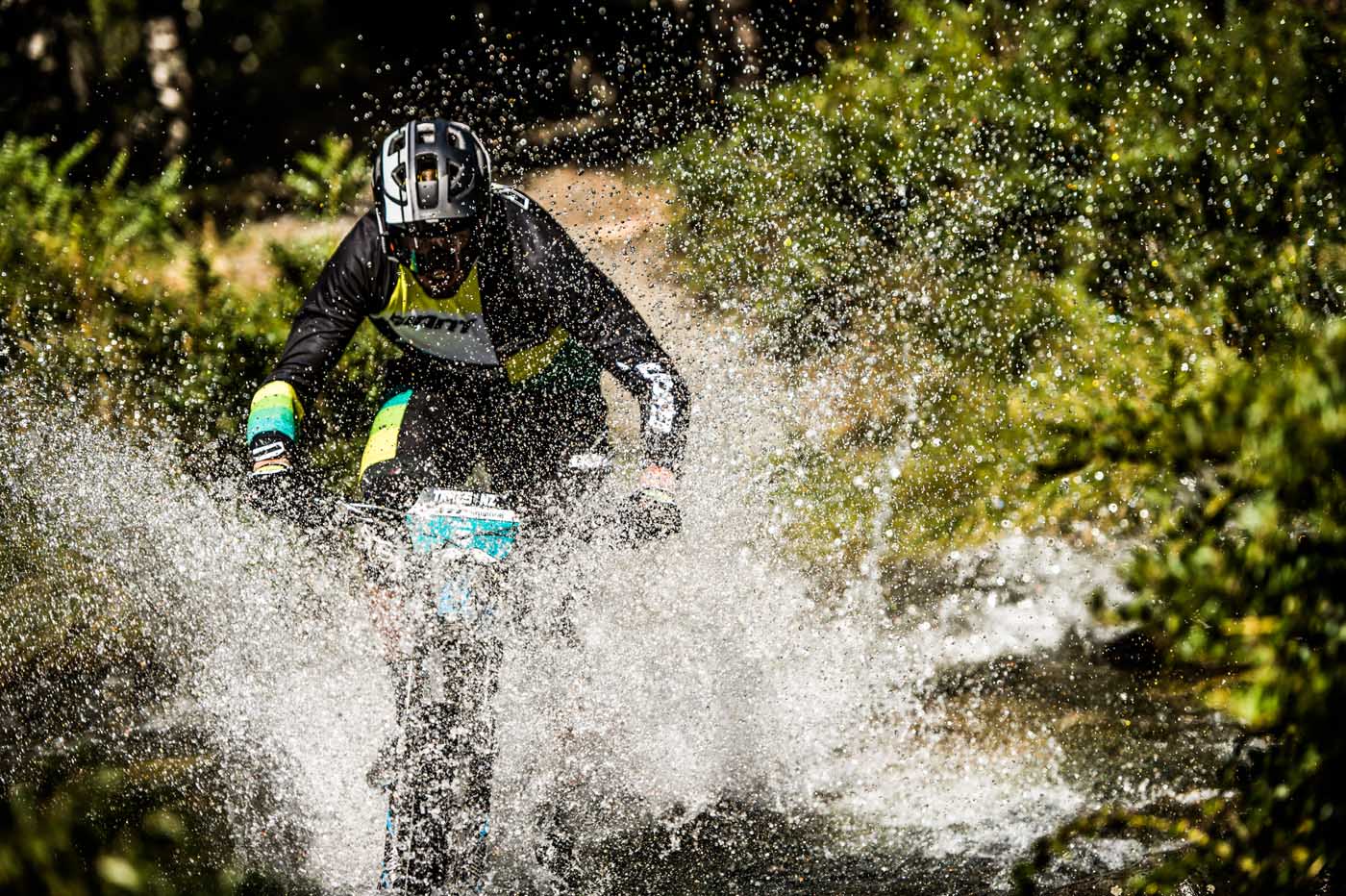 Which has been the bigger career highlight; becoming XCE World Champion or seeing yourself in [R]evo Mag last issue? Haha

That’s a tough one. Thanks for getting my ugly mug in the mag, but the World Title is still the bigger highlight. I also just want to say thanks to everyone for the support and can’t wait to see you all at the Enduro races soon. YEWWW!!!

Paul thanks for taking the time to chat with us. We really hope to see you back out there on the Enduro World Series tour in the near future mate.

Keep your eye on this weeks Cape to Cape race, as Paul will be firing hard!