Trust your gut – The art of self confidence

As a rider, sometimes it is hard to not overthink a scenario that we may find ourselves in.

Riding mountain bikes in general is a very fun activity that you can enjoy with your mates.  Barrelling down twisting singletrack, roosting sculpted berms, party trains down jump trails, epic day rides, sessions at the local dirt jumps.  Mountain biking is a hell of a lot of fun, right?

However, there are certain times when the nature of the sport changes.  There are times when riding is downright scary.  Many of us have been there before.  A feature on a particular trail which will be the biggest we have ever attempted.  A trail whose reputation precedes itself and which we are yet to experience, waiting to drop in at the trailhead.  A huge double jump, a massive drop, whatever.  In these times, quite often we find ourselves alone (mostly because our mates are watching!) and grappling with a plethora of ‘what if?’ scenarios that are running through our mind.  What if I come up short? What if I have a gnarly over-the-bars in the rock section? The list goes on.

Of course, there are many times that these scenarios can and do eventuate, thus revealing the relevance of us second-guessing ourselves to drop in to the trail or feature that just served us with a one-way ticket to pound-town.

This scenario is surpassed by the rare occasion where failure is not an option. Coming up short means serious injury in the best-case scenario, and death in the worst.

Full commitment or none at all.

Full send, first attempt.  As Yoda said to Luke Skywalker: “Do, or do not.  There is no try.”  In these situations the temptation to look over your bike to make sure everything is working properly, every bolt perfect, re-tie your shoes, clean your goggle lens, mess around with your suspension, fiddle with your brake levers, is overpowering.  Anything to postpone the moment where you must drop in and commit.  At this point you are stuck in your own head, again going through every potential ‘what-if’ scenario-only this time the stakes are that much higher.

In these times, I have found the mind should take a back seat and the body should take over.

Start moving and doing concrete actions that will make success more attainable, rather than thinking of a way out.  After all, you got yourself in this situation- you should be thinking about succeeding rather than the possibility of failing.  Start pushing your bike up the run-in, tell your friends out loud that you are going to hit the feature, do up your helmet strap and pull on your gloves.  Turn on your GoPro, knowing that you are about to capture some awesome footage.  (This works surprisingly well, by the way.) 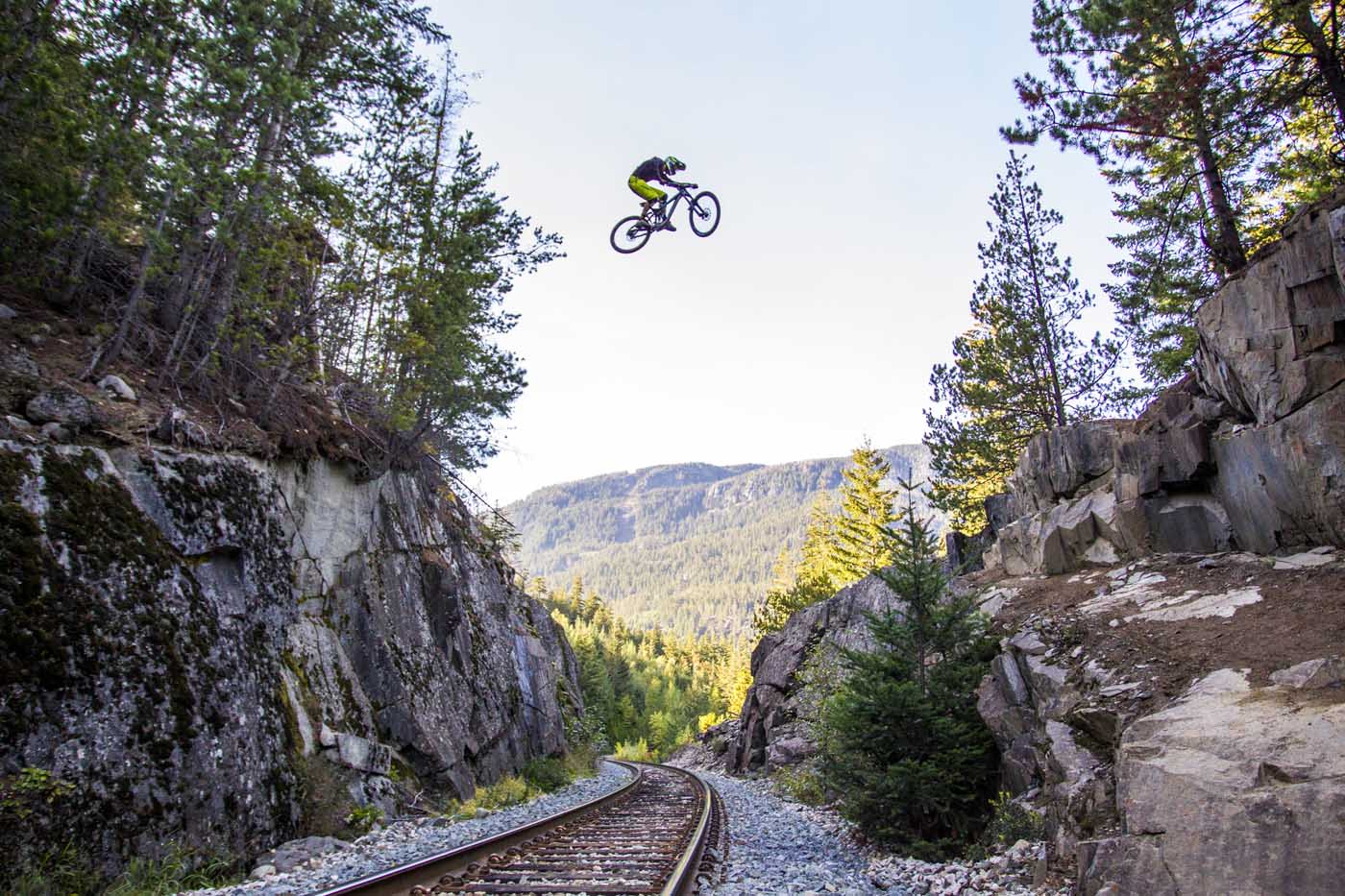 Block out the negative potential result and just focus on the task.

Instead of worrying if you’ll have enough speed for the run-in, tell yourself that 5th gear is optimum for you to get up to speed.  Don’t worry about the gap, focus on hitting the takeoff correctly and the rest will take care of itself.  Wrap your fingers around your grips and don’t even consider grabbing the brakes.  You don’t need them.  Brakes aren’t going to help you clear a 45 foot step-down over a set of train tracks.  Trust in your abilities and let yourself visualise landing perfectly, rather than thinking if you’ll make the landing at all.  Then step on your pedals and drop in.  Don’t hesitate, just go.  Waiting isn’t going to help you accomplish your goal, so why bother?  Have faith in your abilities, trust your gut, and take positive action to set yourself up for success in the best way that you can.