Is it 2028? Introducing the new Specialized Levo Turbo, a bike that seems light years ahead. 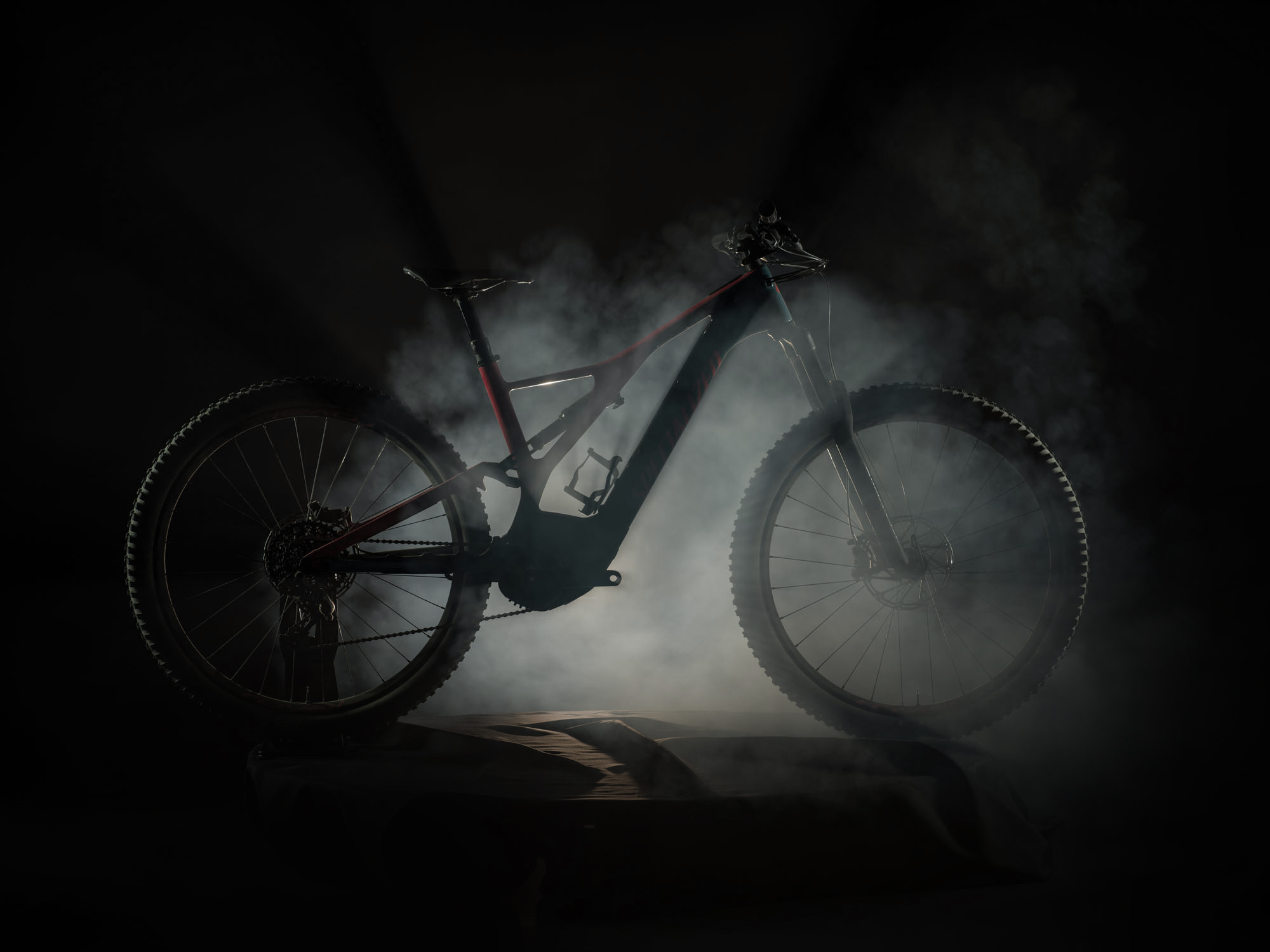 You can write today’s date down in the history books as the day e-trail bikes with all of their electric components finally reached a level of integration where by the bike actually feels and handles just like a regular good ‘ol traditional trail bike. Specialized have somehow managed to seamlessly amalgamate the motor and battery into the new Levo brilliantly, both visually and most importantly in it’s sheer ride performance.

During the past year or so I’ve ridden well over a dozen different e-trail bikes of all makes and models, and one thing they share in common when you’re out riding them is that there is always a certain sense in the back of your mind that you’re pedalling along on something that is robotic. When that power assistance cuts in and out, that small adjustment you need to make as the rider to counter balance that change in tempo, it serves as constant reminder that you’ve on an e-bike. The new Levo dissolves virtually all of those notions. This is by far the most ‘natural’ feeling e-bike I have ridden to date. When you’re out riding the new Levo on a trail the bike feels super light, it’s very, very quiet and the way that the power is delivered by the new Brose 2.1 motor is so smooth that at no point can you really even tell the point of mechanical engagement or disengagement. With all of those factors combined, the new Levo really does set itself a long way apart from most other e-trail bikes on the market. 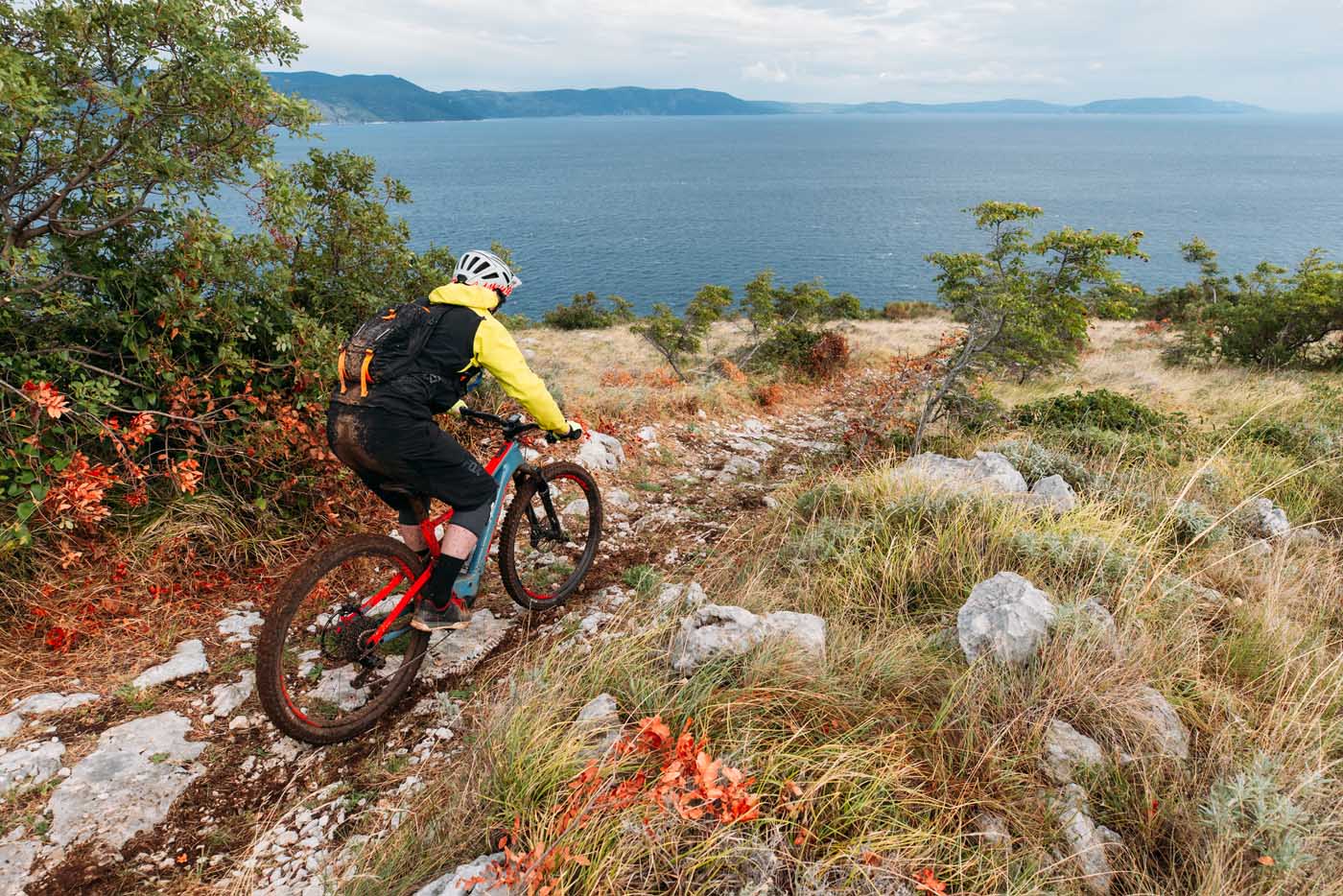 I recently had the opportunity to travel to Croatia and spend 3 big days in the saddle riding this new Levo. Also on hand during the trip were the brain team of engineers who spent years developing the new bike, which allowed me to spend a huge amount of time learning about all of the rad details and unique technologies that went in to crafting every last inch of this enchanting new machine.

Before I tell you more about how the new Levo rides, first let’s take a look at what’s new about the bike (spoiler alert: everything) and also what Specialized have managed to improve upon over the existing Levo (spoiler alert again: everything!) 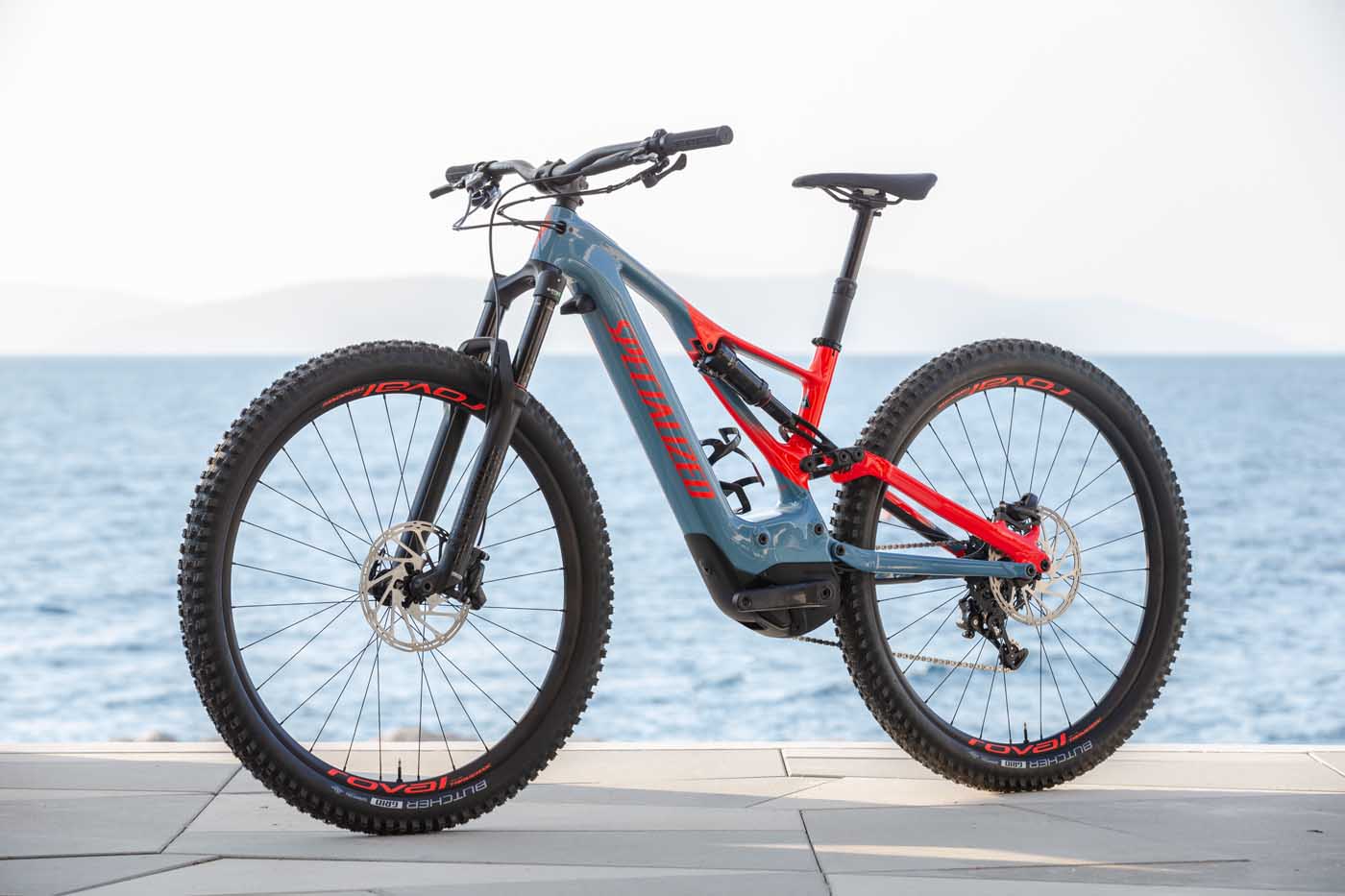 The new Levo was primarily brought to life by a dedicated team of 19 staff based in Switzerland at Specialized’s ‘Turbo Innovation Center’, the bike’s development was also heavily support by the team at Specialized’s head office in Morgan Hill, California, as well as their manufacturing facilities in Asia. It’s actually pretty mind blowing to learn just how much extra tech goes into making an e-Bike.

In addition to the entire process of building a new bike frame from the ground up, they then have to incorporate what is essentially a nervous system into the frame to ensure that all of the various sensors and computers and wiring and the motor and the batteries and everything else is able to communicate with one and other in order to make the bike so much as even turn on, let alone function and perform. All in all, creating the new Levo was a mega undertaking and the process took over 3 full years (a little birdy whispered in my ear that Specialized were already working on various features of this bike back when they launched the original Levo 3 years ago!)

Joe ‘Buck’ Buckley // MTB Product Manager @ Specialized Bikes, explains the goals that they set out to achieve with the Levo.

Now I don’t want to seem like your high school math’s teacher here, nor some Specialized employee trying to flog you the bike, but I am going to have to throw some numbers at you for a second here because the Levo carries with it a lot of impressive figures! First up lets talk weight savings – the new top of the line S-Works model is a staggering 1.8kgs lighter than the previous version!

Whilst I wasn’t able to get my hands on a pair of scales at the launch the new S-Works model is rumoured to weigh just 19.2kgs! As soon as you pick the new bike up you can tell its way lighter than a regular e-Bike. 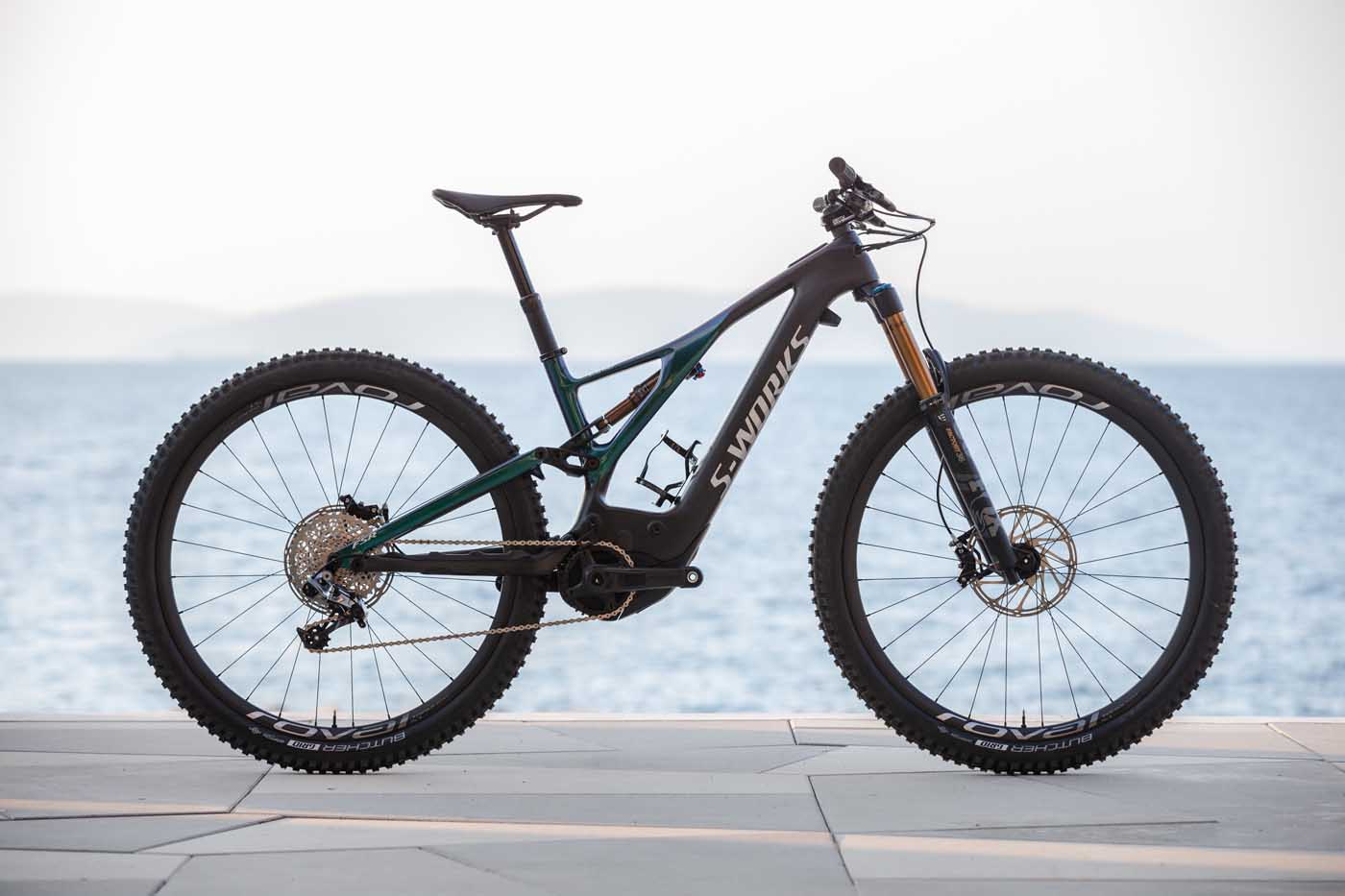 Out on the trail the Levo is so light you can literally bunny hop puddles and trail obstacles as if you were on a regular trail bike.

“It’s actually pretty weird getting used to riding an e-Bike that is this light.”

Even the new alloy framed Levo has undergone a major diet. The fresh alloy frame weighs the exact same as the previous generation top of the line carbon frame. One of the key areas where the Levo was able to shred so much weight is in the design of the motor which eliminated more than 800 grams over the previous gen motor.

Now lets talk gains  – the Levo’s new Brose 2.1 motor is 15% smaller than the previous generation, while still being a lot more efficient and even more powerful. It now amplifies the rider input by 410% (1.3 motor: 380%), providing up to 560 watts and 90 Nm of torque. Unfortunately, because Australia is still a ‘nanny state’ with a lot of its laws, the maximum assistance speed that the Levo is allowed to deliver is 25kmph. This is the same limit that all legit pedal assist e-bikes sold in Oz right now are limited to. Once your speed climbs over 25kmph the motor cuts out and your little legs are then on their own to create the horse power.

As mentioned earlier, the new bike also features a radically new battery. Well, 2 battery options actually. The S-Works and Expert Levo models come equipped with 700-watt-hour Specialized M2-700 battery, the rest of the line gets the 500Wh version (M2-500). The M2-700 battery will be available aftermarket and can be put on the other Levo models. By filling the batteries with secret magic dust Specialized have somehow managed to increase the ‘range’ capacity of each unit by 40%!  Ultimately, two new Levo’s have been developed side-by-side, a carbon frame version and an alloy frame version. Both frames shared identical geometry. The new Levo is also going to be offered in a female specific spec which is centered around the alloy frame version.

The Levo’s travel has been increased up to 150mm. They’ve also added a Flip Chip which allows you to adjust and customize your bottom bracket height and head angle quickly and easily.

The new Levo is 29” exclusive. Whereas the previous Levo was offered several wheel options, Specialized know that the 29” wheel is faster and offered better handling so they focused all of their attention of building the new frame around the best wheel size for the job. It is also interesting to note that the frame features a heap of tyre clearance, allowing you to fit anything up to 3” wide and there will still be daylight on all sides.

The top half of the new Levo’s frame strongly resembles the silhouette of the recently released Stumpjumper, with its single sided seat mast, offset shock, etc. Perhaps the most stricking feature of the main frame though is just how slim the downtube is. Where as most e-Bikes on the market tend to feature monsterous downtubes, one of the key design focuses for Specialized was to minimse the downtube’s overall circumference as much as possible. Clearly, they managed to ‘tick that box’ and ultimately the new Levo’s downtube resembles a regular Stumpjumper. But what’s even more remarkable is that housed inside that modest downtube is the new 40% larger battery that I was harping on about a few paragraphs ago.

Beautifully integrated into the center of the bike’s toptube you’ll find the Turbo Connect Unit (TCU) which is the brain of the all-new Levo. The TCU also gives you an overview on your battery level (each LED represents 10% of your battery charge), shows you the motor-assist level you’re pedaling with, allows you to change modes, and it also turns your bike on or off.

Another cool thing about the new bike is that you can charge the battery either on or off of the bike. If you want to charge the battery on the bike, there’s a charge port at the bottom bracket area of the frame where you simply plug-in the charger cable. The battery is super easy to remove, you simple unscrew one bolt and with 2 fingers grab the battery ‘handle’ and slide it right out of the frame. It then installs the same way but in reverse order.

There’s also a new version of the Mission Control App which once downloaded to your frame allows you to fully customize the motor settings to the personal needs & preferences, diagnose the bike and extract a report, record/save/analyze rides, upload rides to third-party platforms. 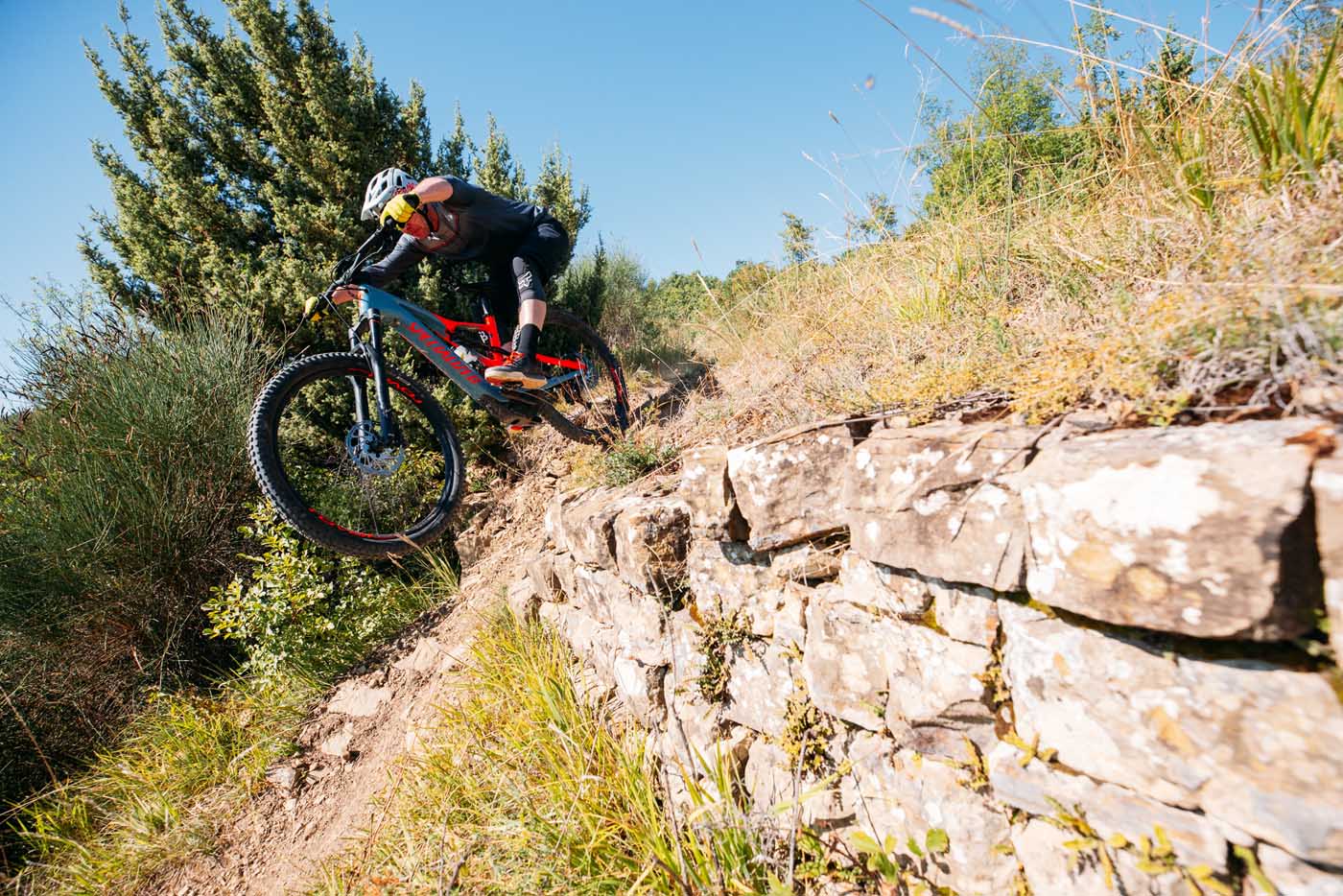 The new Levo in a nutshell? A much lighter bike, much bigger battery = a lot more range for longer rides.

To hear all about how the new Levo rides be sure to pick up a copy of [R]evolution’s Spring issue which will be out in just 2 weeks. 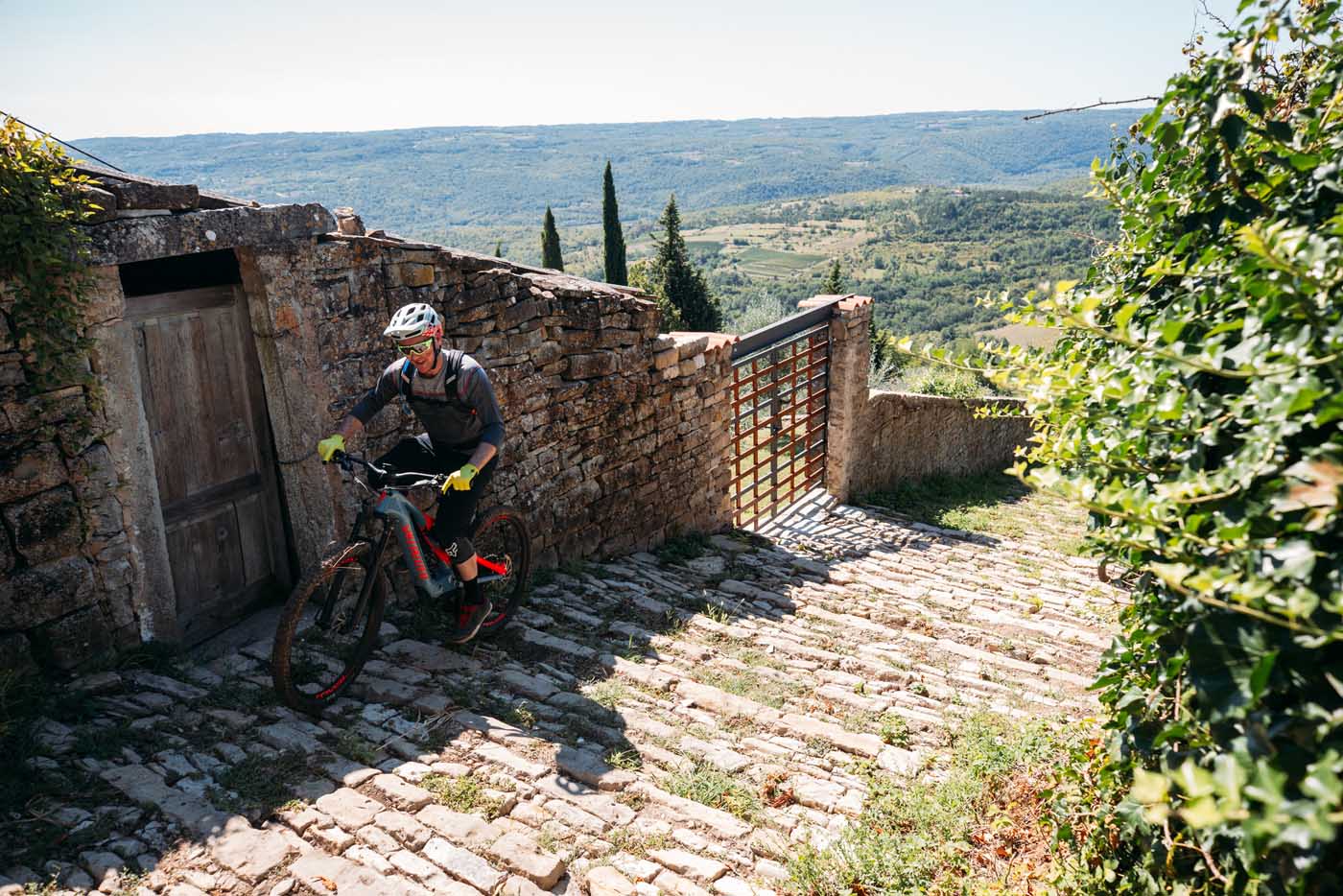