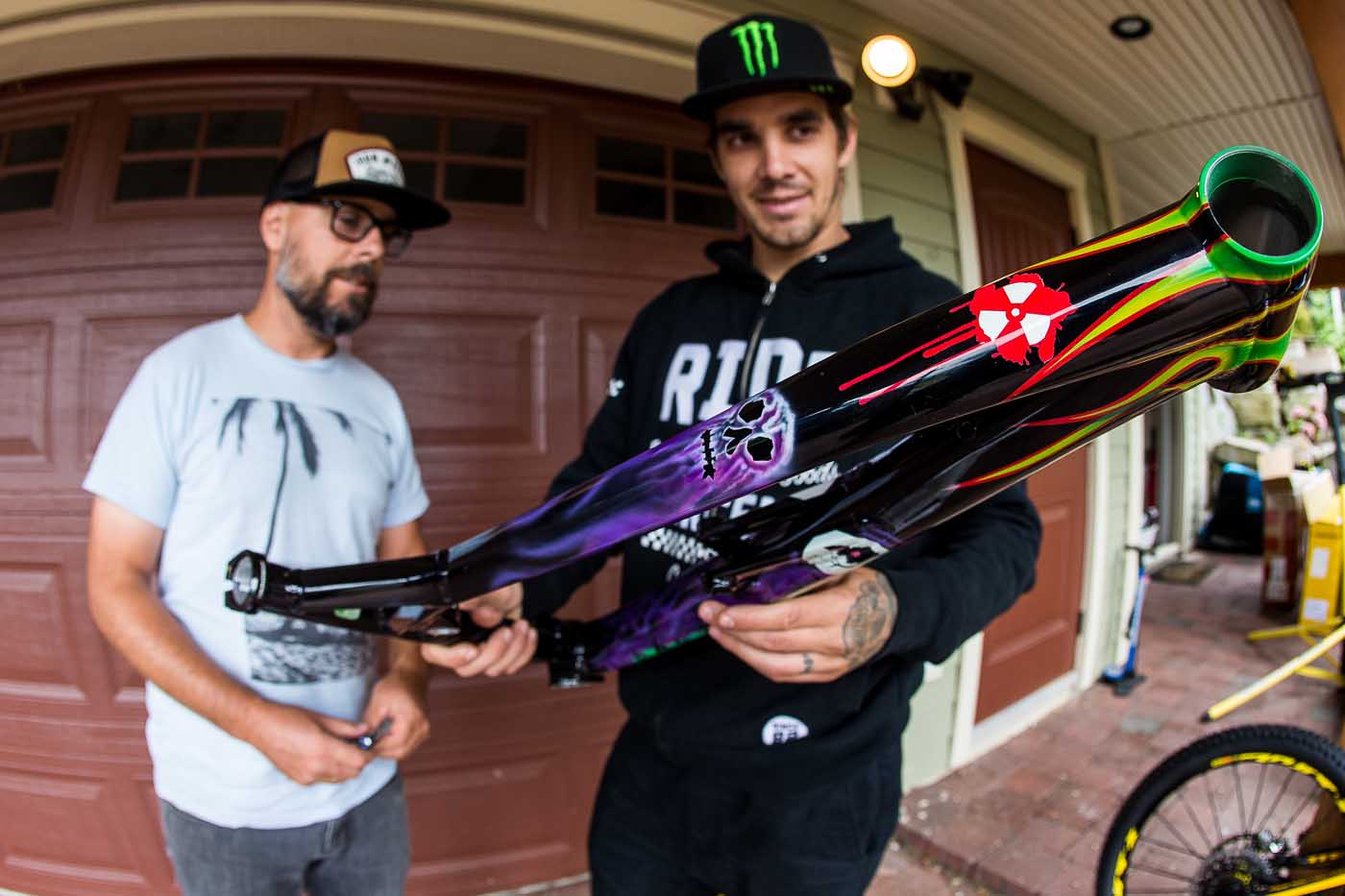 Last issue we took a close look at Sam’s Nukeproof ‘Pulse’ World Cup DH race bike which featured one of the most dialed in set-ups we’d ever seen. Unless you’ve been living under a rock, you’ve no doubt heard/seen that Sam has been wearing two hats this season, racing both DH and Enduro events. The two disciplines obviously call for completely different bikes, a completely different set-up, a completely different approach to the race weekend, etc. etc. Midway through this season Sam’s team, CRC Racing, presented him with this amazing ‘one of a kind’ hand painted Nuke Proof Mega 275. This is bike that Sam raced to victory in France, where he claimed his first EWS win. For this issue’s Pro Bike check column we thought it would be interesting to check out Sam’s Enduro bike and examine the set-up differences between this bike and his longer travel Nukeproof Pulse.

[R]evolution: Your ‘Grave Digger’ inspired paint scheme looks so awesome. And there’s a pretty cool backstory behind it, yeah?

Sam: Yeah the Nukeproof boys did an amazing job. They must have asked me a while ago if I could have a custom themed bike, what would I choose? Well my eldest son Bam has been obsessed with monster trucks and Grave Digger so the idea came from there. I had forgotten about it though so it was an awesome surprise!

Have you been able to pull any strings with your big sponsors like Monster Energy to score yourself an actual drive in a monster truck yet?

No I haven’t had that opportunity yet. A few years ago I met a legend, Damon Bradshaw who drives the Monster Energy monster truck. I got in touch with him when he was in Perth for the monster jam tour last year and he was awesome and got us in to watch practice and he let Bam and myself sit up in his truck so that was cool.

What is your favourite element of the paintwork on this bike?

Honestly I love the whole thing, they nailed it I think!

Let’s talk about how this season has unfolded for a minute. If we are brutally honest, it’s probably been your worst ever year on the DH bike, but on the other hand you’ve had this incredible breakout success racing enduro on the EWS circuit. How’s it been for you?

Yeah it’s been tough that’s for sure. I put a lot of effort into training and being prepared over the off season and to be honest I thought I was good to go. That wasn’t the case and I just haven’t had the speed this year on my DH bike. I think to be honest I just haven’t ridden my DH bike anywhere near enough coming into the season. A lot of our good tracks in Perth are in pine forests and have been logged the last couple of years so there’s not many places to actually ride DH that is easy for me to access.

‘Sam Hill’ the quintessential fearless downhiller, flat pedals, flat out… You’re not exactly the typical ‘cookie cutter’ enduro racer and yet you’ve taken to the discipline like a duck to water. Tell us a bit about how you’ve adapted so well and so quickly?

It’s been pretty easy for me, I’ve always done better on the longer DH tracks, even at school I was always a better middle distance runner so I think the longer courses are something I can handle. The EWS rounds I have done have just had some awesome natural terrain that keeps you on your toes and makes you think quickly. I like that you need skills to be able to ride fast because you don’t know exactly where the tracks are going.

Downhill these days seems to be getting more streamlined and built for TV instead of the raw technical style it used to be. So yeah, I’m just really enjoying the challenge and fun of enduro.

A lot of people were surprised when you opted to sit out the final DH World Cup to instead focus on the final Enduro races this season. What brought about that decision?

I wanted to give myself the best chance to win one of those races. Once I found out I didn’t make the Worlds team for Australia I was pretty bummed. My DH season hadn’t been a good one and to race Andorra and the last two EWS rounds would of meant five weeks away from home and my family. I have been having more fun at the EWS races so it seemed like a better idea to give myself an extra two weeks at home to train and prepare for those to give myself the best chance to podium.

Of course, that strategy paid off nicely for you at you ended up taking your first EWS win in France! Stoked for you mate. Okay so tell us a bit about your race bike and how you set it up for an EWS weekend?

Again that’s something I’m still learning. Bike setups seem to change a lot more for each round than it does for different downhill tracks. I’ve had to soften up the suspension compared to how I used to ride it at home. It was just too much to hang onto on the longer stages.

Is your Nukeproof Mega frame stock or custom?

Obviously you’ve got less travel than a DH rig but do you still tend to set your suspension up in a similar fashion?

I like it pretty firm, but it’s gotten softer lately. I like it to track well and ramp up on the bigger hits.

Is it too early to talk about your plans for next year yet? Will you still be riding for CRC Nukeproof?

Yep I sure will. I am still contracted for next year with Chain Reaction. Those guys have been awesome to me through some frustrating times so I think it’s time to pay them back in 2017.