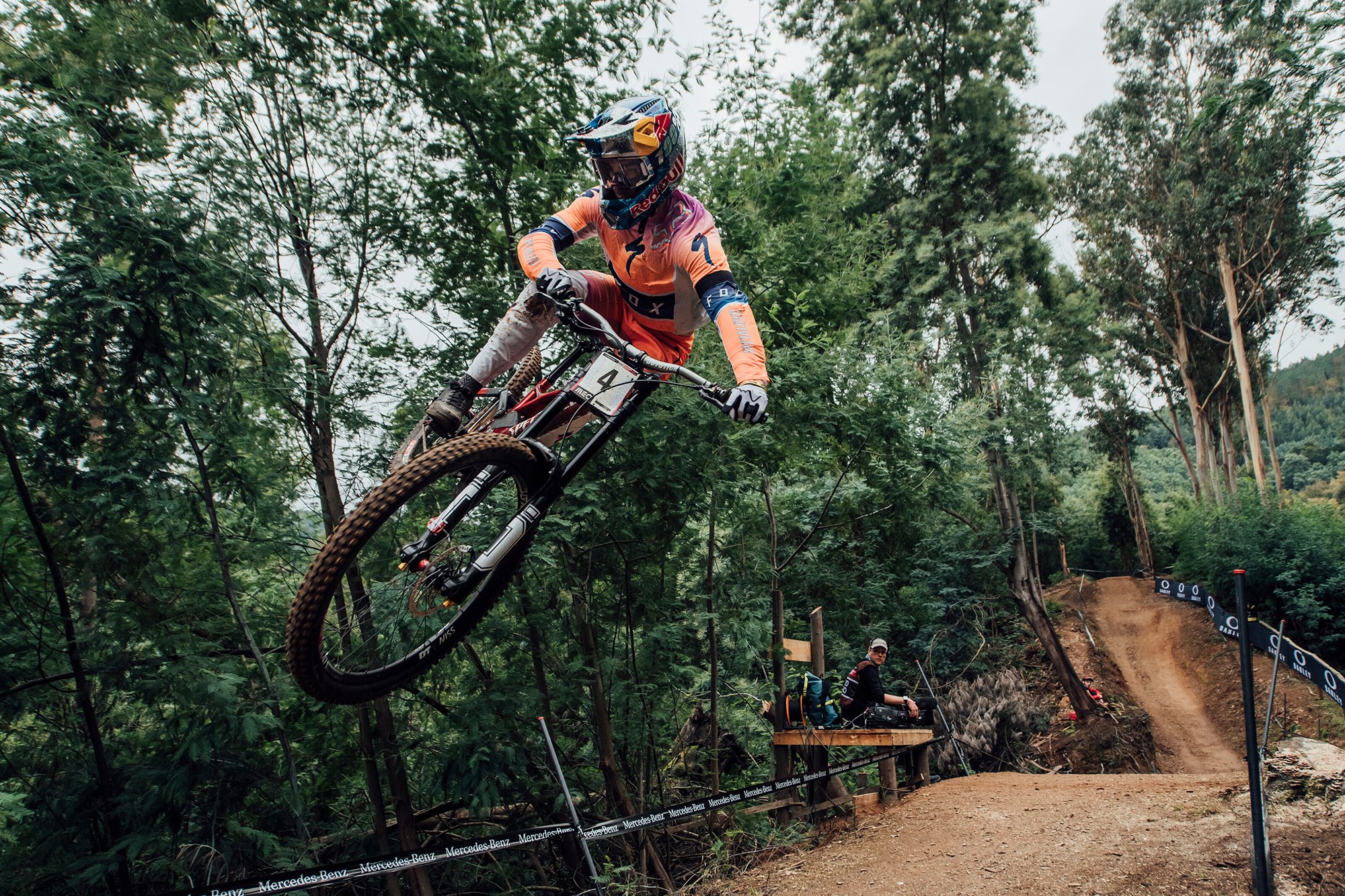 Marine Cabirou produced a solid performance to claim victory at the UCI Mountain Bike World Cup in Lousã on Sunday, while Great Britain’s Matt Walker took the overall title in the men’s race despite Loïc Bruni finally returning to winning ways with an absolute ball-tearer of a run.

In a late and short season with four World Cups taking place across three weeks, fatigue was expected to play a part in Lousã. However, there were no signs of exhaustion during what has to be one of the best days of racing we’ve seen in a long time.

After her sensational qualifying and finals run in round three on Friday, Myriam Nicole was seen as the woman to beat. Despite suffering a bloodied nose during qualifying and looking like a proper Halloween party go-er, Nicole produced another fantastic run to set a time to beat of 4m28.982s. Nina Hoffman then set down a new marker and seemed to be heading to victory as Tracey Hannah, in the final race of her illustrious career, pushed too hard and came off the bike with the finish line in sight.

Cabirou was next up and the French rider threw down some serious style and tidy lines as she bettered Hoffman’s time by a staggering 1.702 seconds. British rider Tahnée Seagrave, who finished in third place on Friday and was showing signs of getting back to her best, was up at the first split but eventually had to settle for third place, with Cabirou taking the win and snatching the overall lead from Nicole.

“I knew I needed to win today to take the overall so I gave it everything I had. I was a bit aggressive and I made some mistakes but it was a good run, I had fun and it’s just amazing to win.”

In the men’s race it looked as though the rain and wind would play havoc with the final riders. Instead the big guns delivered in thrilling fashion.

First to lay down a serious marker was British rider Philip Atwill who, after a couple of barren years, showed that he was back to being a serious contender for titles. Jamie Edmondson was next up and he sliced two tenths off the time of Atwill. With the rain now arriving it seemed as though the Brit could be heading for victory. Neither David Trummer or Finn Iles could get close to Edmondson’s time and suddenly there were just three riders remaining. Next up was Matt Walker, the 21-year-old Brit with the World Cup leader’s jersey and plenty of pressure on his shoulders. Walker showed no signs of nerves though and produced an aggressive run that was enough to take the lead. Fresh off his sublime victory on Friday, the penultimate man at the start gate was Greg Minnaar. The South African was super smooth and that translated into serious speed as he took the lead with an incredible run.

Last up was Loïc Bruni who produced a sensational finish to the day. The Frenchman was behind after the second split but made a small adjustment while heading down the long pedal section and claimed the win by 0.457 seconds. A fitting finale to a sensational season, Bruni returned to winning ways, but it was not enough to deny Walker being crowned the overall 2020 World Cup champion.

“I came into the race and I had already surpassed my expectations for the year. The run was tricky and conditions were a bit sketchy so I gave it everything and to come across the line and get old the news I’d won the overall was incredible. It’s so hard to put into words, I’ve realised a dream here today.”