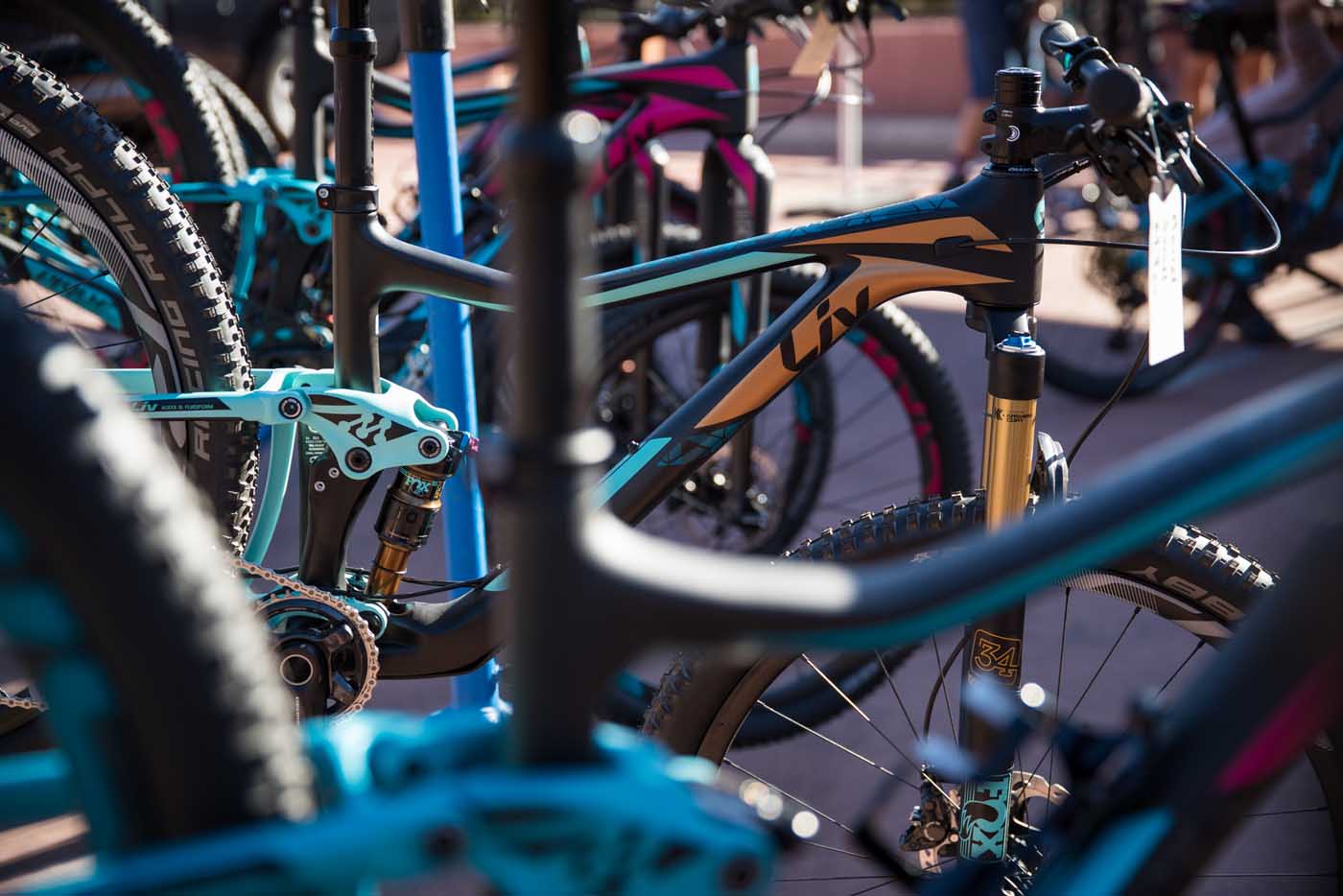 Women’s specific brand, Liv, have been working overtime these past few years to create two exciting brand new models; the Hail and the Pique. So when the opportunity came up for [R]evolution to join a group of female riders and test these two models on the dusty trails of Sedona, Arizona, I was there in a heartbeat!

Liv’s media launch was a chance to get to know the Hail and the Pique and to feel how the bikes handled Sedona’s legendary rocky, ledgey and loose terrain. The riding over there is amazing, although I must confess, my eyes were at times distracted away from the stunning red rock landscape, in order to scan the trail in front of me for rattlesnakes!

Liz getting to know the new Liv range.

You will be able to learn a lot more about why Liv bikes are bucking some contemporary design trends, as part of our full review of the new Hail and Pique which will be featured inside [R]evolution Magazine’s upcoming Summer edition. For now though, let’s take a quick look at these two promising new bikes…

Liv’s new Hail is without a doubt the masterpiece of the 2017 range. Although the Pique leaves nothing wanting in terms of XC set-up and capabilities, it was the Hail that really had the Liv team stoked. The Hail is an Enduro bike with serious credentials, a bike that loves to get thrown around on your local trails with the burl to take a competitive rider all the way to EWS contention.

Are you a female rider that has never actually considered a female specific bike before? You should take a good look at the new Hail Advanced, the first ever 160mm travel full-carbon Enduro/All Mountain offering from LIV, a company which proudly stands at the forefront of R & D in female specific “from the ground up” design. At first glance, this 160mm-travel bike is beefy. Thanks to the bike’s well designed cockpit, the Hail feels stable over rough terrain but also has an instant playfulness and doesn’t carry any excess bulk. This is a high performance bike for female riding characteristics and female bodyweight distribution.

Starting with a blank page, the designers took information from a global database of female body dimensions, proceeding through three prototypes in consultation with pro female riders like ex-world champion Leigh Donovan, who tested and provided feedback until mid-2016 when the refined Hail Advanced was born.

“Thanks to the bike’s well designed cockpit, the Hail feels stable over rough terrain but also has an instant playfulness and doesn’t carry any excess bulk. This is a high performance bike for female riding characteristics and female bodyweight distribution.”

This bike truly plays to women’s strengths, and in doing so brings out more aggressiveness and confidence in the female rider. With a higher bottom bracket and steeper head angle, Liv has gone against current trends in mountain bike design with clearly defined intentions – to provide a smoother, safer, yet more aggressive ride both up and down technical trails. Women generally find lifting the front end of their bike more challenging than male riders, so the steeper head angle, together with the capacity for locking out the Lyric shocks at 130mm, lightweight frame and short head stem help to make the Hail more nimble and manageable in tight uphill sections.

The Hail allows female riders to bomb fast and confidently do big drops, yet it climbs with the efficiency and ease of a much smaller bike, making it a true all-rounder. The Liv brand stands for empowering all women to ride the bikes they deserve and want. Liv ambassador and Women’s All-Ride founder Lindsey Voreis put it to us powerfully on day one when she said women ride together to lift each other up and hail each other’s triumphs over fear. There’s nothing holding a girl back on the Hail Advanced 0. All Hail the Queen!

To check out the full Hail range that are available at dealers across Australia hit up:

The Pique is the stylish new leader in Liv’s cross country range, designed within the brand’s guiding principle of the 3F’s; Fit, Form and Function.

We know that women are willing to invest in themselves in buying high- end XC bikes: the top of the range Lust was a very, very popular bike within Liv’s current range.

Pique shares a lot of Giant’s 2017 technology updates, including a Maestro Suspension with a trunnion mount and a composite rocker arm made with Advanced Forge Composite Technology, which according to Liv’s engineering team is both 50% lighter and stronger than an aluminium link. The new trunnion mounts have allowed Liv to raise the bottom bracket so the rider can pedal smoothly over obstacles without having to ratchet or lose their speed, which was obvious riding over the “baby’s-head” sized rocks of the Sedona desert. I could keep going with a smooth pedal stroke over many rocks and ledges when my instincts were telling me to ratchet.

With a longer 120mm shock body, Liv was able to lower the air pressure, the leverage ratio, and improve rebound control with better overall shock performance. On the trail this gave me the sense of riding a bike with more than a mere 120mm of rear suspension. The Pique takes drop offs and steep sections like a bigger bike, but climbs with speed and corners beautifully.

“Built with 27.5 inch wheels, the Pique sets you free to ride fast and light, a bike with an attitude that’s equal parts finesse, aggression and total playfulness.”

Clearly a product of Liv’s “no compromise“ approach to quality, the stylish top-end Pique Advanced 0 is set up with an enviable 120mm RS1 fork, 120mm RockShox Deluxe RT3 rear shock and SRAM XX1 Eagle 1×12-speed drivetrain. With slightly more stack, lower standover height, slightly shorter chainstays and Boost hubs, the Pique is more stable and balanced front and rear than its predecessor the Lust. Built with 27.5 inch wheels, the Pique sets you free to ride fast and light, a bike with an attitude that’s equal parts finesse, aggression and total playfulness.

To check out the full Pique range that are available at dealers across Australia hit up:

Lindsey Voreis and Leigh Donovan at Liv Launch in Sedona

Wanna read a whole lot more about how the Pique and Hail performed on Sedona’s technical trails? Be sure to check out the feature inside our upcoming summer edition, which will be followed by extended coverage right here on [R]evolution.com.au in the near future!